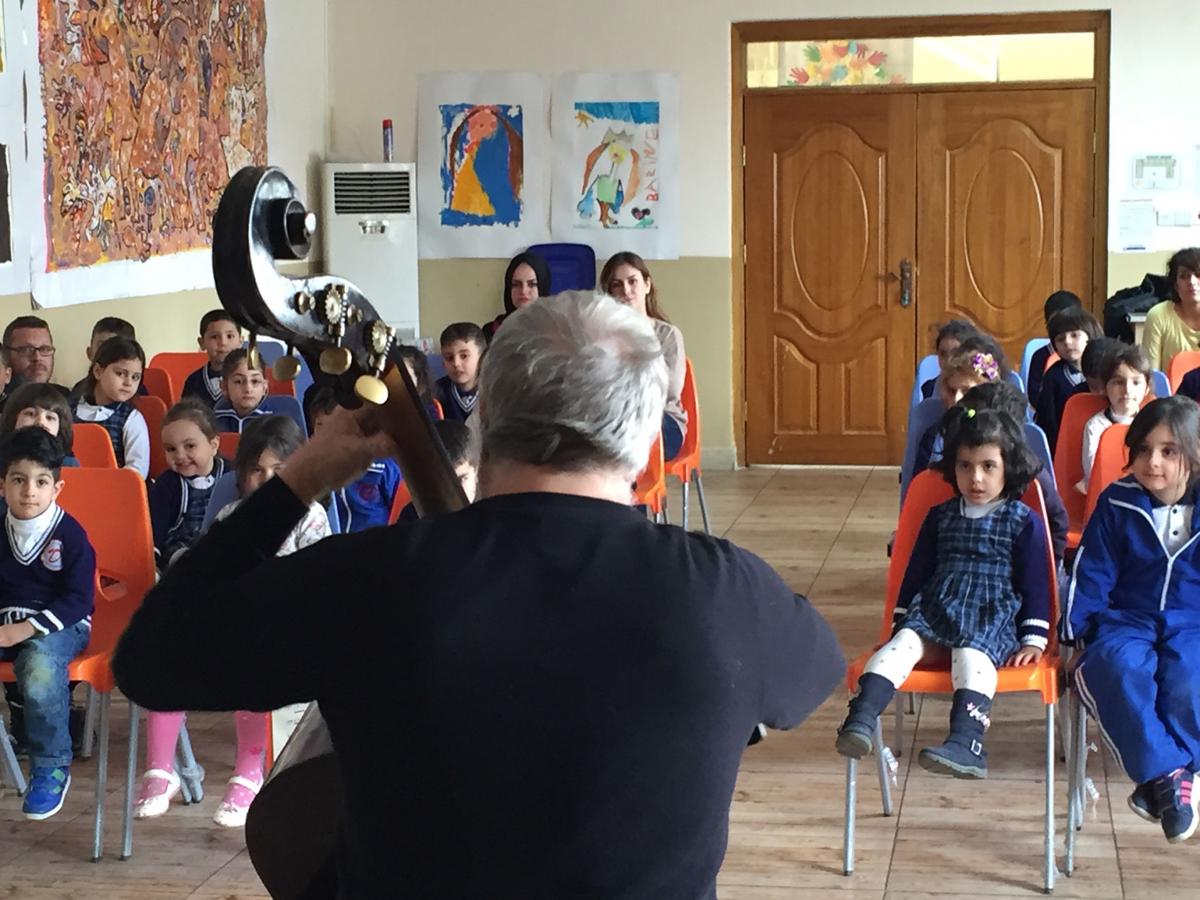 Richard “Dobbs” Hartshorne plays for preschoolers at a French school in Sulaymaniyah, a city in Iraqi Kurdistan. 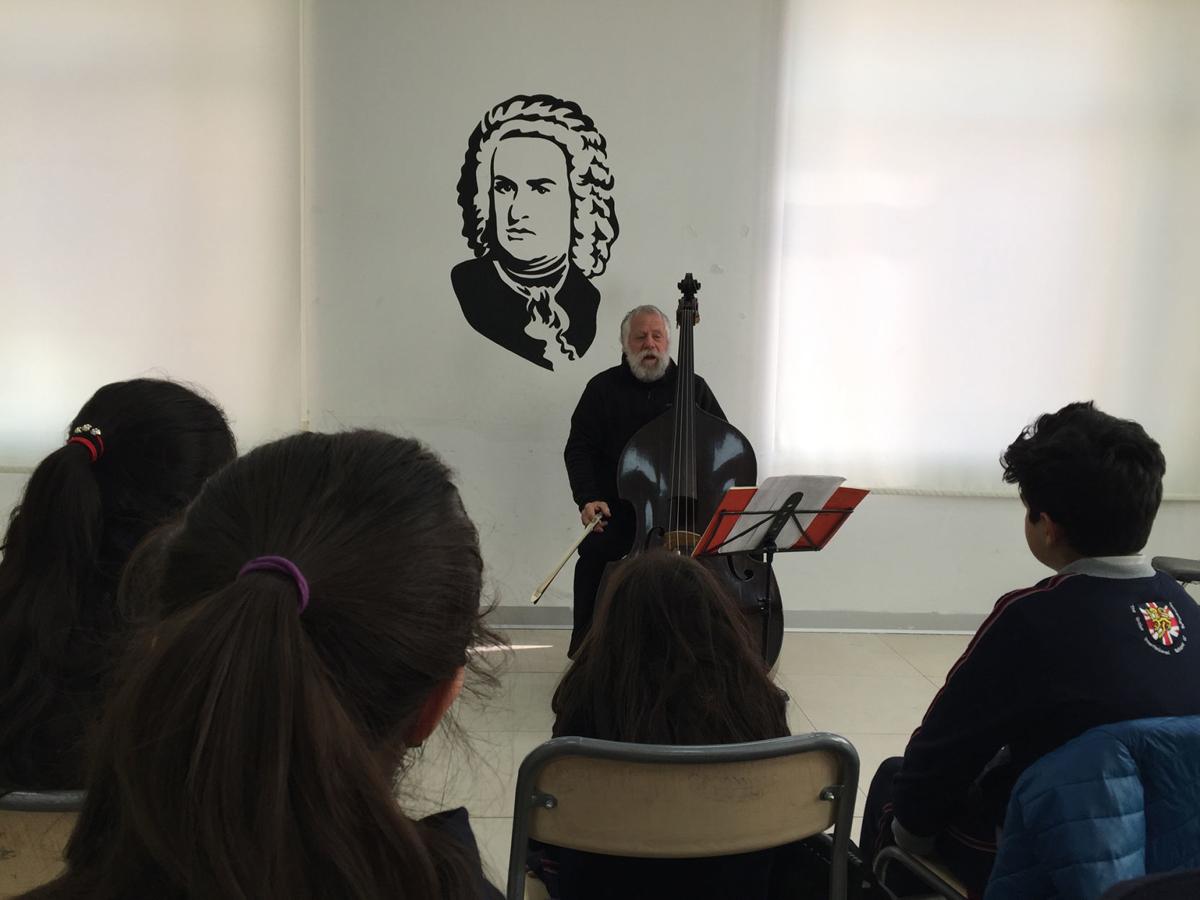 Richard “Dobbs” Hartshorne, with an illustration of composer Johann Sebastian Bach behind him, plays for high school children at a British school Sulaymaniyah, Iraqi Kurdistan. Hartshorne recently played at the Cheshire County jail.

Richard “Dobbs” Hartshorne plays for preschoolers at a French school in Sulaymaniyah, a city in Iraqi Kurdistan.

Richard “Dobbs” Hartshorne, with an illustration of composer Johann Sebastian Bach behind him, plays for high school children at a British school Sulaymaniyah, Iraqi Kurdistan. Hartshorne recently played at the Cheshire County jail.

NELSON — Richard “Dobbs” Hartshorne and his guide were on their way to a remote Ugandan prison one day last spring. The Nelson resident has made it his mission to bring the music of Johann Sebastian Bach to people in living in difficult conditions. On that day, he was bringing Bach to the Eastern Ugandan district of Soroti.

Hartshorne has traveled abroad at least a dozen times since 2004, giving free concerts to prisoners, refugees, school children and college students in the Middle East and Africa. He founded a nonprofit organization, Bach with Verse, to help him cover the travel costs. On his trips, he stays with friends he met while traveling abroad, giving three performances per day, usually to groups of 100-200 people.

“(Prison is) a place where people are unstimulated and deprived and are suffering in one way or another,” he said.

Hartshorne, who plays the double bass, said he and his guide arrived at the Ugandan prison unannounced, but with a letter form the director of corrections. They had tried to contact the prison warden ahead of time, but didn’t succeed.

After some conversation, the warden agreed and the concert began. Within 10 minutes, Hartshorne said, 400 men clad in bright yellow jumpsuits had filed into the prison courtyard. They congregated under two large trees, whose shade reminded Hartshorne of sunglasses.

“They were just squeezed in where there was shade, all of them, and (the shade of the trees was) two sort of circles connected”, Hartshorne said.

And then, he took out his double bass and began to play. He began with Bach.

“They were absolutely quiet and even though (there) were 400 of them outside, they could hear,” he said.

He followed with original compositions — funny stories he writes and sets to music. He has friends translate the stories to local languages and produce a CD with the exact pronunciations, which Hartshorne uses to learn how to perform the pieces.

Back at the prison courtyard, Hartshorne was ready to tell a story — one of the more than 25 he’s written.

“When I started with the funny story in their language, they were just brimming and cheering,” he said. “It always happens, but this was more than usual.”

On Friday, Hartshorne embarked on a three-day journey to Sulaymaniyah City in the Iraqi Kurdistan region, where he’ll spend 2½ weeks. Friends will host him in their homes and arrange performances — like the one he gave at the Ugandan prison — in refugee camps, at music education facilities and at schools.

Bashdar Ahmad Sdiq, 34, a cello professor at the Fine Arts Institute and the University of Sulaymaniyah, said Hartshorne is “a really beautiful soul full of peace and joy and feeling of responsibility.” Everyone, he said, has something to contribute to humanity, and for Hartshorne, it is music.

Sdiq had met Hartshorne in 2010, when Hartshorne had come to Iraq to help with the National Youth Orchestra, of which Sdiq was a member. The orchestra no longer exists, but the friends Hartshorne made during that time are helping him find concert venues in Iraq.

“He’s doing his steps; he’s doing what he has to do as far as humanity, what he feels is important. And we feel it’s important too, so why not?” he said.

Sdiq said Hartshorne will visit the students at the Fine Arts Institute and the University of Sulaymaniyah. The rest of the concerts will be arranged by another local friend, Sdiq said. Hartshorne himself does not know exactly where he will play, but he’s not worried.

“Once I get there, I mean, I have many friends, and they’ll take care of me,” he said. “... (So) I don’t worry about stuff like where I’m going to be on Monday, on Tuesday or Wednesday.”

Before he started Bach with Verse, Hartshorne played in larger, more traditional venues. He was part of The American Symphony in New York City, The National Orchestra of Bolivia and The National Orchestra of Costa Rica. Later, he spent three decades with the Nelson-based Apple Hill Chamber Players. But he prefers smaller, intimate concerts. And if he can bring joy to people in war-torn countries, all the better. Music, he said, has a positive effect on people. He sees it over and over in his concerts.

“You can see this sort of the expression on people’s faces, they’re somehow in some kind of a trance,” he said. “It’s amazing. And then when I turn the corner and start making them laugh, they are louder because they have been moved by the music.”

It is especially important to play classical music to those who wouldn’t necessarily seek it out, he said.

“The audience that identifies themselves as classical music lovers is like 0.01 percent of the population, so if you play for them, they are out there every week or every other day listening to music, and the rest of the world gets nothing,” he said. “So what this ended up being for me is a way to play for people that aren’t seeking it, but they love it when they get it.”