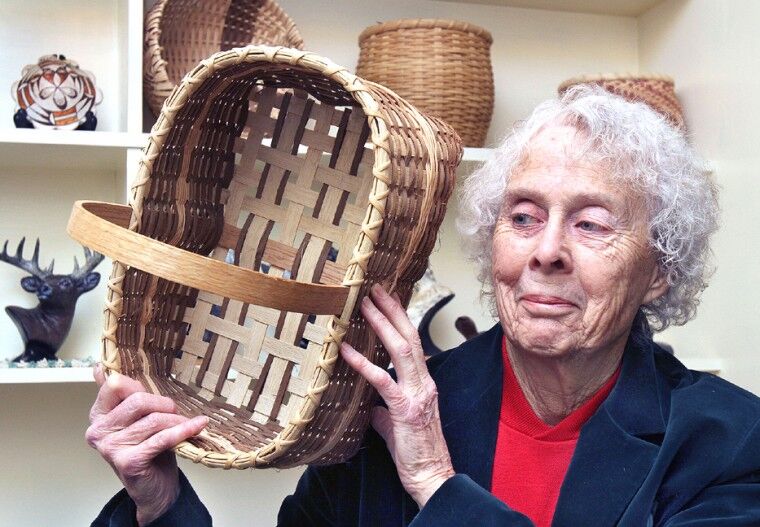 Martha Bauman holds a basket that she made. The shelves in the front entryway of her Keene home are lined with several examples of her intricate handiwork. 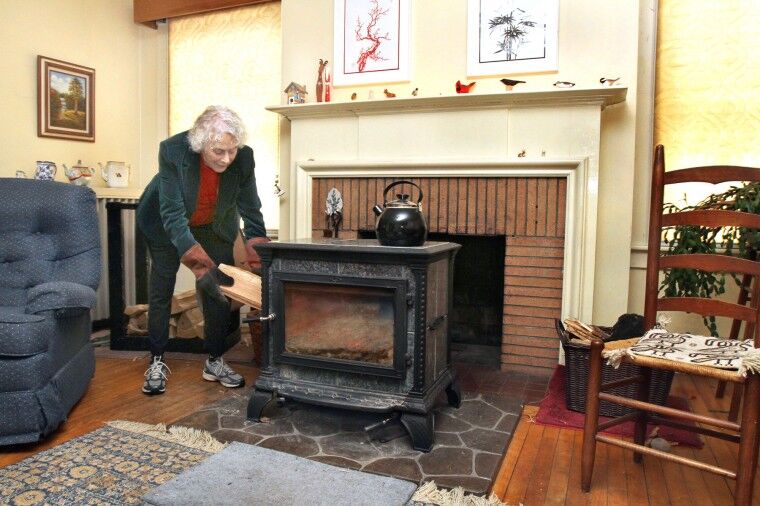 Martha Bauman inserts a piece of wood into her woodstove to retain the warmth in her Keene home. “I’m supposed to be this guru of aging,” says Bauman, a columnist who recently celebrated her 81st birthday. “It wouldn’t do for me to pretend.”

Martha Bauman holds a basket that she made. The shelves in the front entryway of her Keene home are lined with several examples of her intricate handiwork.

Martha Bauman inserts a piece of wood into her woodstove to retain the warmth in her Keene home. “I’m supposed to be this guru of aging,” says Bauman, a columnist who recently celebrated her 81st birthday. “It wouldn’t do for me to pretend.”

This profile was originally published in the Feb. 9, 2013 edition of The Sentinel. Martha Bauman’s obituary can be found on page A4.

Martha Ann Bauman may shy away from calling herself the voice of a generation, but she speaks out about aging issues facing her peers every week.

Bauman may be best known to Sentinel readers as the author of Wit and Wisdom, a long-running weekly column that focuses on aging and the interests of older people. But before she moved to Keene more than three decades ago, she had a long career in the fields of mental health, alcoholism treatment and community service in Massachusetts.

Not to mention raising three daughters.

Bauman was born in the center of America’s heartland during the Great Depression, in 1932. She’s from Sallisaw, Okla., home of the fictional Joad family portrayed in John Steinbeck’s epic novel “The Grapes of Wrath.”

Bauman says despite growing up during the Depression, her family was mostly spared from the extreme hardships depicted in Steinbeck’s tragic tale.

“I can remember occasionally somebody coming to the door asking for a meal, or perhaps if we had any odd jobs that needed doing around the house,” she said.

Her mother, Frances, shared teaching responsibilities with her aunt at a grade school in Watova, Okla., until she was in her mid-20s. After that she became a full-time homemaker, raising Bauman and her brother, Harold.

Bauman’s father, Cecil, was a county agent with the agricultural extension service, and he worked for many years with Oklahoma State University.

After World War II, groups would come to Oklahoma from developing and rebuilding nations, some from as far away as Africa. Her father would take them out to farms to teach them “about management, organization, whatever was needed,” she said. “During the early 1950s he even traveled to Burma.”

Her father related the story of when he and a colleague checked on a 4-H project at a farm in the Oklahoma countryside. As they were leaving to return home, his colleague leaned over and said, “Cecil, did you know Charlie had his gun trained on us the whole time we were there?”

Charlie was none other than Charles Arthur “Pretty Boy” Floyd, the notorious bank robber (and to many, a folk hero) who was evidently hiding out in that very barn that day.

One day, while she was a student at Phillips, she tagged along with her roommate to tryouts for a theatrical production. The play’s student director, Norman Zane Knoy, caught her eye.

In 1953, she and Knoy married, and in 1956, after her husband finished seminary school in Enid, the couple moved to Cambridge, Mass.

“We didn’t know where Cambridge was,” Bauman said. “But we piled our worldly goods into a trailer, put our infant daughter in a car crib, borrowed $300 and departed.”

While her husband attended Harvard Divinity School, Bauman at first worked at Harvard Business School, and later for the Greater Lynn (Mass.) Community Health Program and at Middlesex County Hospital in Waltham, Mass. It was while she was working in Lynn that her interest in community mental-health issues first took hold. “I liked it and was intrigued,” she said

Meanwhile, the couple’s family was growing to include three daughters: Sarah Jane, Pamela and Laura.

In 1978, Bauman accepted a position with Monadnock Family Services in Keene, where she developed and oversaw community mental health services for people with severe or persistent mental-health concerns, including people coming out of the N.H. State Hospital.

“I figured we’d stay five years,” Bauman says, with a twinkle in her eye.

A walk on the artistic side

“I have never been a craftsperson,” Bauman says. “But I had a phase of basketmaking. ‘Self,’ I said, ‘you have a habit of living too much in your head. You need a craft’.”

The shelves in the front entryway of her Keene home are lined with several examples of her intricate handiwork — all but two of them, that is.

One is a basket from the Gullah community of Charleston, S.C., and the other is one from China, said to be more than a century old: “But who knows?”

Bauman also has her eyes on a basket from Arizona’s Papago Indian community, “But I don’t want to spend the $300.”

Both music and poetry have also played a big part in Bauman’s life. “I cut my eyeteeth on the feminist singers and poets: Holly Near, Meg Christian, Marge Piercy, Joan Baez,” she said.

For many years she managed Adam’s Rib, a youth coffee house in Lynn, Mass. That was in the heyday of New England folk artists including Bill Staines and Jaime Brockett. “It was an era that I felt at home,” Bauman says.

She says she has also sung in all of the Keene-based choirs and choruses. More recently, her tastes have turned to jazz — Bauman attended a performance by The Manhattan Transfer in Concord last month. Jazz pianist and composer Dave Brubeck is also a favorite.

“And then he went and died on me,” she says.

Since her arrival in the Monadnock Region, Bauman has served on numerous committees and boards.

As if that wasn’t enough, she also explored a career change in her mid-50s, earning a degree in environmental studies at Antioch University New England in Keene. But after three years with the Student Conservation Association based in Charlestown, she realized she missed community work and returned to Monadnock Family Services as director of the Monadnock Volunteer Center.

For many years, Owen Houghton of Jaffrey shared writing responsibilities with Bauman for The Sentinel’s weekly Wit and Wisdom column.

“I have been the beneficiary over the past 15 years of her cutting-edge perspectives on issues of senior living,” says Houghton, who still writes weekly on aging issues. “Martha has been advocating for older folks for years as a social worker, and in retirement has been a tireless supporter of resources to improve the quality of life for those who do not have a voice. She is well known and respected among caregivers, and influences many agency decision-makers with her insight and wisdom.”

And her devotion to her work still runs strong. Bauman said she takes it personally when people respond to recent episodes of violence with, “Where was the (mental-health) treatment these people needed?”

“Most of my life has been in the field of mental health,” Bauman says. “I came to MFS to develop a program for people with chronic and severe mental-health concerns, including those coming back to the community after months or years at N.H. State Hospital. Due to budget cuts and changing treatment philosophies, however, some of those critical services have been eliminated. And now a lot of it is gone. Well, we had them, and now they’re gone, reduced ....”

Bauman is also perfectly up-front about her 81st birthday, which she recently celebrated. “I’m supposed to be this guru of aging,” she says, again with that twinkle. “It wouldn’t do for me to pretend.”

Martha Bauman: At a Glance

Martha Bauman: At a Glance