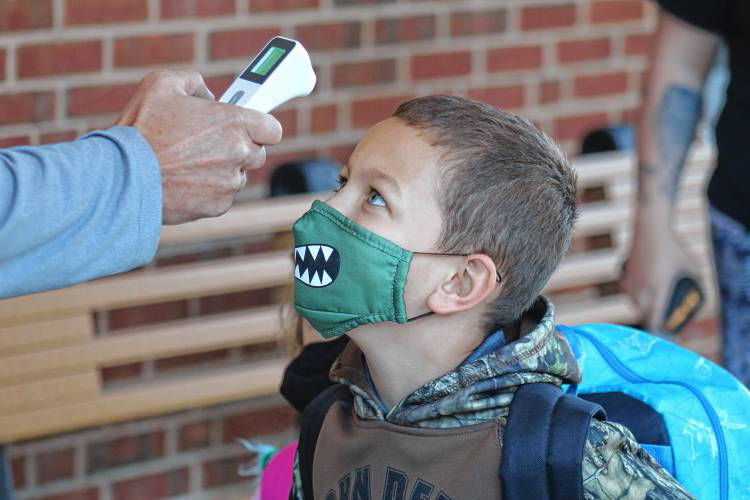 A student's temperature is taken upon arriving for the first day of classes at Florence Rideout Elementary School in Wilton Monday. 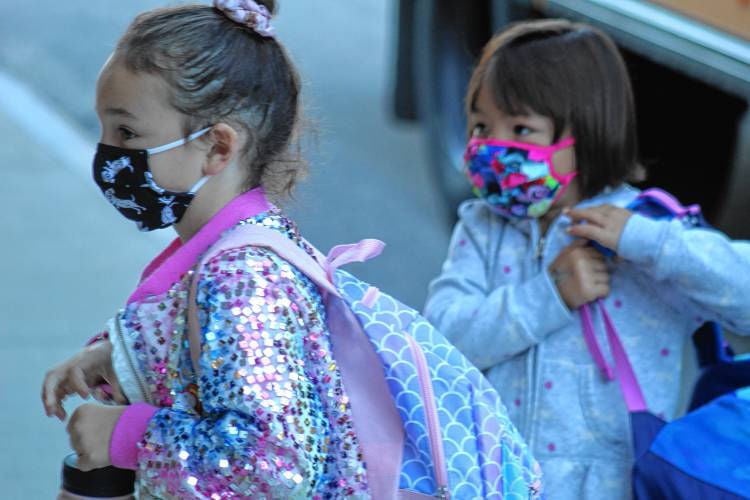 Students arrive for their first day of classes at Florence Rideout Elementary School in Wilton Monday. 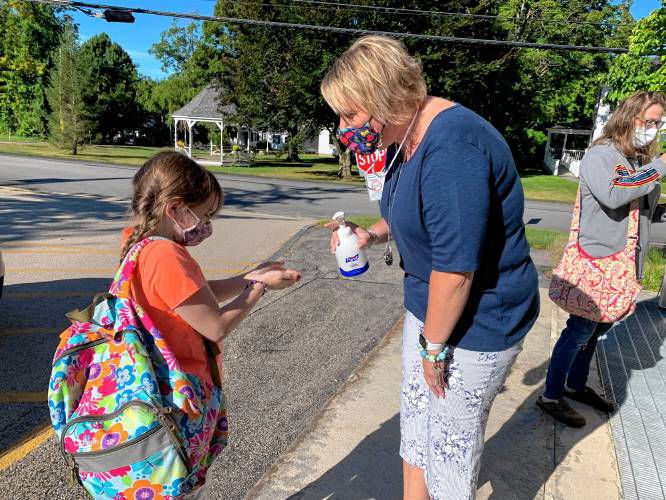 A student is given hand sanitizer on the first day of classes at Florence Rideout Elementary School in Wilton on Monday.

A student's temperature is taken upon arriving for the first day of classes at Florence Rideout Elementary School in Wilton Monday.

Students arrive for their first day of classes at Florence Rideout Elementary School in Wilton Monday.

A student is given hand sanitizer on the first day of classes at Florence Rideout Elementary School in Wilton on Monday.

Most students in the region are headed back to school in person, but significant contingents have opted for all remote learning or even homeschooling due to the continued disruptions caused by the COVID-19 pandemic.

In Mason, the vast majority of families chose to send their children in person twice a week for the district’s hybrid model. About 75 families opted for the hybrid model, while only five are attending remotely full-time, according to Mason Elementary School Principal and district Superintendent Kristen Kivela.

Parent Tara Crosby said she’s comfortable sending her son to Mason Elementary only because of the small size and how well she knows the staff, while her daughter, who is attending Milford Middle School, is doing so remotely full-time.

“We know everyone here, and we know they’re not going to cut corners,” Crosby said.

Parent Alyssa Lavoie of Wilton, who has a kindergartener and 2nd-grader, said she opted for both of her children to attend in person, despite part-day options for her kindergartner and remote options for her older child.

“I think it’s important for them to be in school, as long as they can be,” she said. “They know it’s going to be different, but they’re still excited.”

Parent Brandon Smith of Wilton agreed, saying that his son Noah is going to be attending kindergarten full-time as well. He said it was important to him that his son attend in person, and he didn’t see that there would be a significantly reduced risk by sending him only half the day.

“Kids that age need that social interaction,” he said.

He said his children haven’t struggled with things like mask-wearing and are just excited to start school.

Sixty-one percent of students in the Wilton-Lyndeborough Cooperative School District intend to return to school in person five days a week, Superintendent Brian Lane said on Aug. 13. Families were asked to specify their intent by Aug. 4, he said, and 21 percent of students will be learning remotely five days a week, 8 percent are using a modified structure where they attend in person for part of the week, 2 percent will be homeschooled, 2 percent have withdrawn from the district, and the district still hadn’t heard from 6 percent of students. There have been no staff resignations over COVID-19, Lane said, although some have opted to work at other schools or to retire. Next week, the district intends to distribute information on what to expect regarding distance learning, class schedules and returning to school, he said.

At ConVal, more than 72 percent of students are returning in person and more than 20 percent are participating remotely, Superintendent Kimberly Rizzo Saunders said on Friday, as the school district continued to follow up with families about their plans for the start of the school year. More than 85 percent of ConVal’s staff will be teaching in person.

Samantha Bernstein lives in Hancock, and her son is a senior at ConVal Regional High School. “Henry really likes being in school but doesn’t think it’s really safe, and he’s torn about it,” she said. “I think everyone’s feeling pretty torn, [the reopening plan is] a huge compromise document … Any kid old enough to express their opinion will say, ‘This is good, this is bad, and I wish COVID hadn’t happened,’ ” she said.

Bernstein is a nurse and pursuing a Ph.D., and approves of ConVal’s plan. “There’s always some amount of risk,” she noted, but she said the district appeared to factor in everyone’s interests and didn’t make any decisions haphazardly.

Ashley Concha-Vera, a mother of 10-year-old twins, found homeschooling the preferable option for the start of the year. “I have never thought about homeschooling. I was always that mom who said I would never homeschool, ever,” Concha-Vera said, but her kids were uncomfortable with the idea of starting 5th grade in a new school and being unable to play with their friends as they usually would, due to physical-distancing rules. “It’s just so hard to watch your kids go to play with a friend and have to restrain themselves,” she said. “It’s not the life I imagined for my kids when I became a mom.”

Concha-Vera has a full-time job as a financial adviser. In order for homeschooling to be feasible, buy-in from the twins’ stepmother and other homeschooling families was essential, she said. Three or four other families agreed to isolate while homeschooling so the kids could play together without restrictions. Concha-Vera’s best friend, who is also homeschooling her daughter, will teach the twins one day a week, and her mother-in-law will watch them during the day. “We’ll be schooling in afternoons and some weekends to make it work,” she said.

“Homeschool gives us flexibility to follow things that are more interesting to kids,” Concha-Vera said, and she is gearing up to support her children’s hands-on interests. She’s been following local Facebook groups and attending virtual Q&As with veteran homeschool families to source curriculum and trade tips with other newbie homeschoolers. Her kids are excited to incorporate things like gardening and a geology study into their science curriculum, she said, as well as to spend more time with their little sisters, who are 3 and 1, respectively.

Although Concha-Vera hopes her kids can go back to school in person for the second semester, it’ll all depend on their comfort level, she said. She said she’s felt supported in her decision to homeschool by her group of friends but noted the high levels of division and argument among parents about the best options for children right now. “The most important thing for people to know is that whatever decisions they’re making for their child, that’s the best decision,” she said, “It’s not about what I do or you do.”

Results reported by ConVal, WLC, Mascenic and Jaffrey-Rindge were fairly similar in the STRRT survey results. Although most said they wanted to send their children to school, and more than 80 percent of their children were eager to return, responders also indicated significant uncertainty that faculty and students could successfully mitigate the coronavirus.

Although more than three-quarters of responders said they personally understood the recommended health and safety guidance provided by health officials, only around half (from 46 percent at WLC to 58 percent at Mascenic) believed their schools could adequately implement that guidance. Similarly, about half of responders (from 43 percent at Mascenic to 56 percent at WLC) did not believe students could maintain new restrictions like social distancing, avoiding congregating in groups and physical contact with peers, and other safety protocol.

Overall, the STRRT survey recorded 388 responses from ConVal, 110 from WLC, 240 from Mascenic and 268 from Jaffrey-Rindge.

This article is being shared by partners in The Granite State News Collaborative. For more information, visit collaborativenh.org.