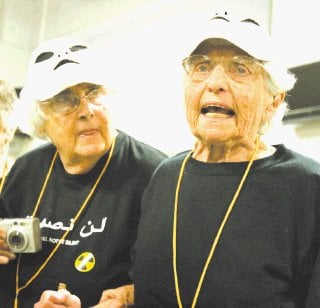 Ruth Hooke, 85, left, of Amherst, Mass., and Frances Crowe, 92, of Northampton, Mass., protest at the meeting of the Nuclear Regulatory Commission in Brattleboro Wednesday evening. They are members of the group Shut It Down, devoted to closing the Vernon, Vt., nuclear power plant. 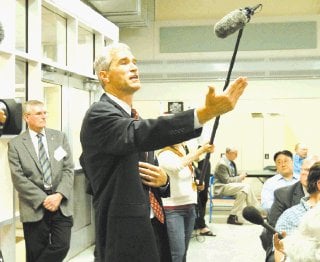 Ruth Hooke, 85, left, of Amherst, Mass., and Frances Crowe, 92, of Northampton, Mass., protest at the meeting of the Nuclear Regulatory Commission in Brattleboro Wednesday evening. They are members of the group Shut It Down, devoted to closing the Vernon, Vt., nuclear power plant.

The annual hearing on the Nuclear Regulatory Commission’s safety assessment began with a protest that reversed the NRC and audience members’ positions and ended with a walkout.

The meeting was a chance for people to ask questions or make statements about the plant or the NRC’s assessment. According to a March 5 letter, the NRC determined that, overall in 2011, Vermont Yankee had “operated in a manner that preserved public health and safety and met all cornerstone objectives.”

But not everyone agrees.

Minutes before the scheduled start, a group of about half a dozen protesters arranged themselves at the front of Brattleboro Union High School’s art room, where the meeting was being held.

Dressed in black shirts and white masks, some had signs reading, “NRC is a lapdog, not a watch dog” hung around their necks.

The members of the Shut It Down Affinity Group led the largely sympathetic 140-person crowd in chants revolving around a familiar theme:

“Shut down Vermont Yankee,” said one protester, echoed by the crowd.

Karl Farrar, the regional counsel for NRC Region I, acted as a facilitator for the meeting. Farrar told the crowd the meeting could not start until the protesters cleared themselves from the front of the room.

When the women refused to sit down, several dozen other audience members joined them at the front.

“Mike check,” chanted the crowd. “This is what democracy looks like.”

Members of the NRC met in the hallway while police guarded the doors. Meanwhile, the audience members began giving their statements.

The NRC members returned within five minutes, and Chris Miller, director of the division of reactor safety, answered questions from the side of the room.

Many of the audience members remained at the front. A handful of people with “VT4VY” buttons sat quietly at the back with others wearing NRC name tags.

One man spoke in favor of the plant, but was shouted down by other audience members.

Several people who rose to speak voiced skepticism about the commission’s ability or inclination to regulate the plant. Miller’s answers were met with similar skepticism and were occasionally shouted down, too.

The theme of most speakers was a series of statements and accusations. Subjects ranged from spent fuel rods to the discovery of Strontium-90, a radioactive material, in a Connecticut River fish.

Others raised questions or made comparisons to the Fukushima plant in Japan, which was the site of a nuclear accident last year and has the same reactor design as Vermont Yankee.

Vermont state Rep. Sarah R. Edwards, a Progressive from Brattleboro and active participant in nuclear discussions, said coming to the meeting felt like “another checklist.”

“Right now what I want is that spent fuel seven stories high to be out of our pool as soon as possible,” Edwards said. Vermont Yankee stores spent fuel rods in a pool on the plant’s site.

Elizabeth “Betsy” Williams, a Westminster West resident, was the last person to ask a question. Wearing a “Hello, my name is corporate profits” sign, she asked, “Is there anything we could say tonight that would cause you to shut the reactor down?”

“That’s not the way the system works,” Farrar said.

This response led to a walkout, en masse, to the tune of another “shut it down” chant, ending the hour-and-a-half meeting.

“What we say in these meetings really makes no difference whatsoever,” Williams said.

“I don’t come here because I think you’re going to listen,” said Chad B. Simmons, a Brattleboro resident and member of the Safe and Green Campaign.

Simmons said he was present to show his support for community members who were opposed to the plant and weren’t being listened to.

The community, Simmons said, does not want the plant.

“Safety, reliability — whatever term you put on it — we don’t want to be a part of it,” he said.

Public will get opportunity to ask safety assessment questions

Public will get opportunity to ask safety assessment questions