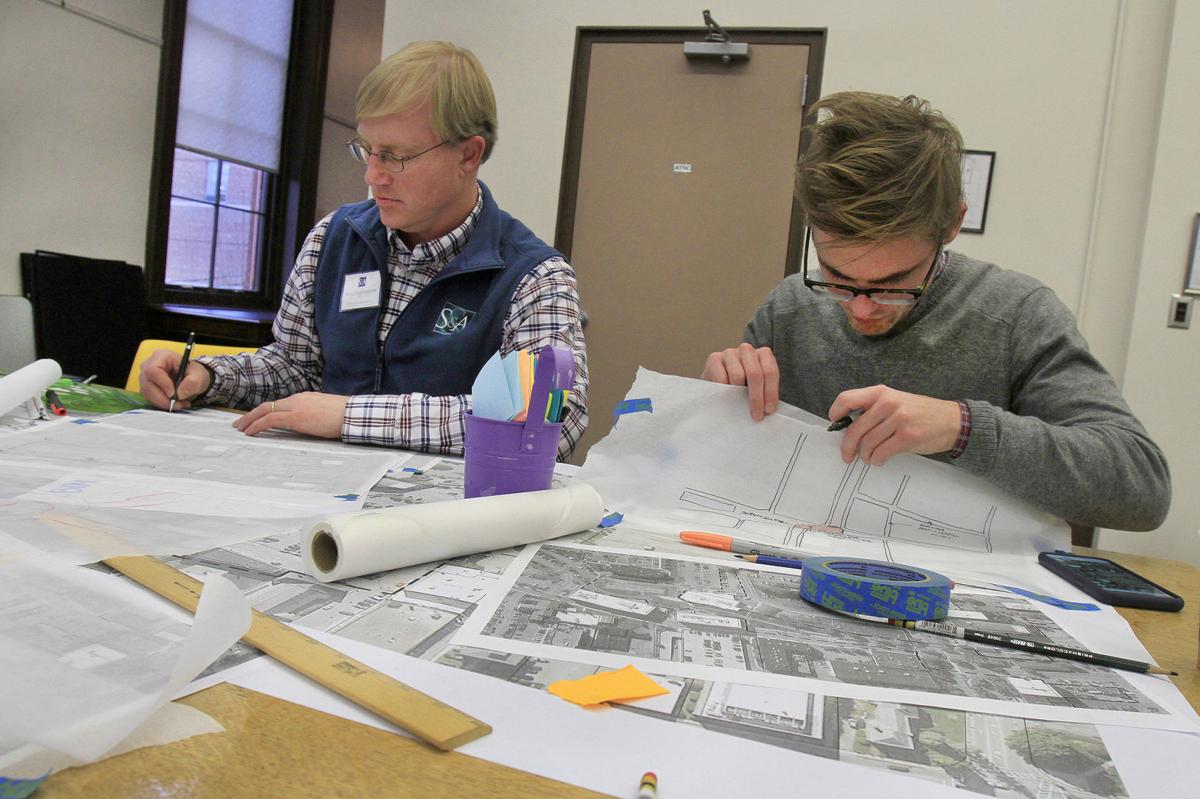 Brud Sanderson, left, an engineer with Stevens & Associates in Brattleboro, and Todd Horner, a planner with the Southwest Region Planning Commission, work during Wednesday's charrette on the proposed Keene arts and culture corridor. The event, which drew input from members of the public, was held at the old courthouse. 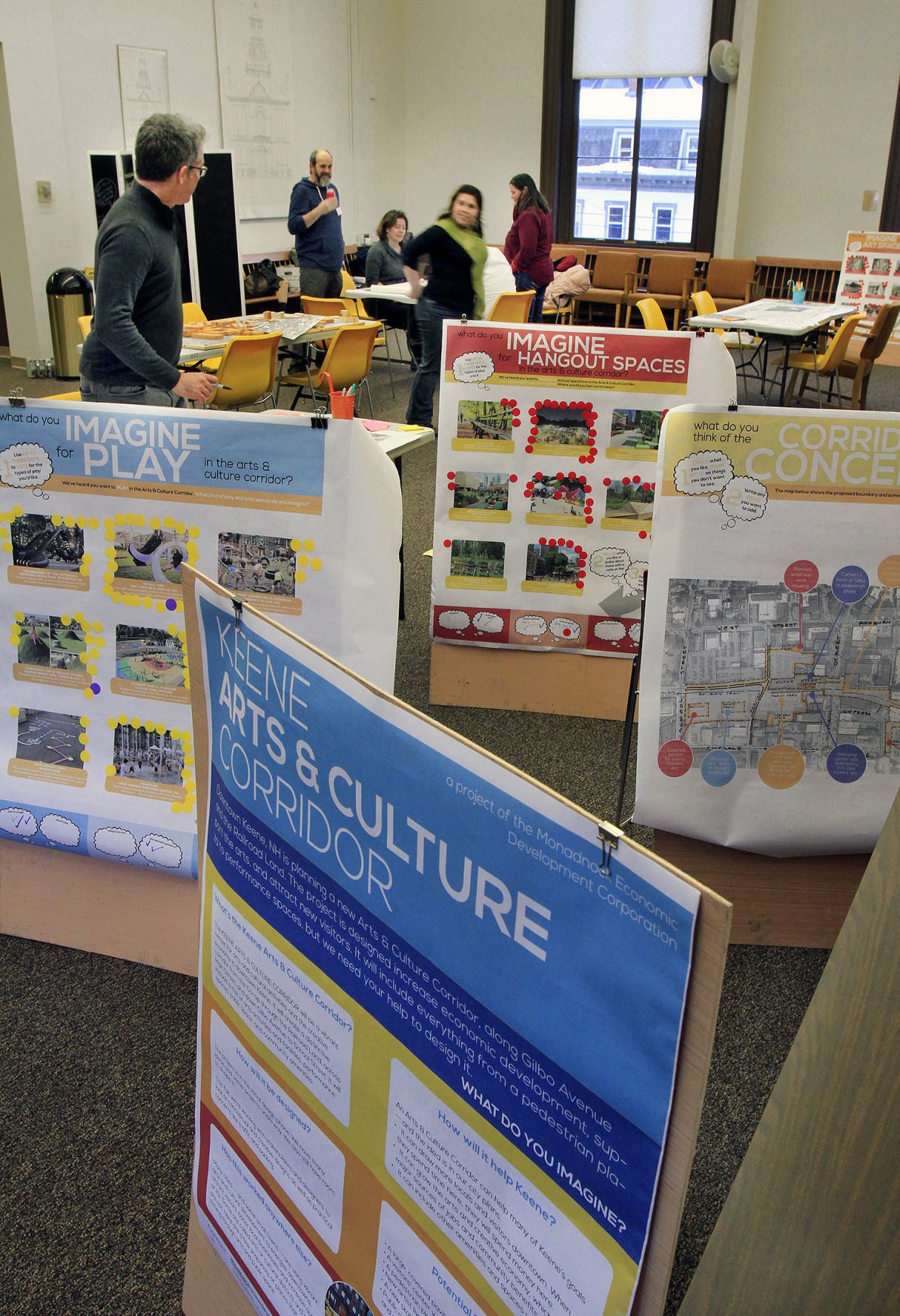 The team working on an arts and culture corridor being proposed for downtown Keene hosted a charrette in the old courthouse Wednesday to draw input from people in the community. 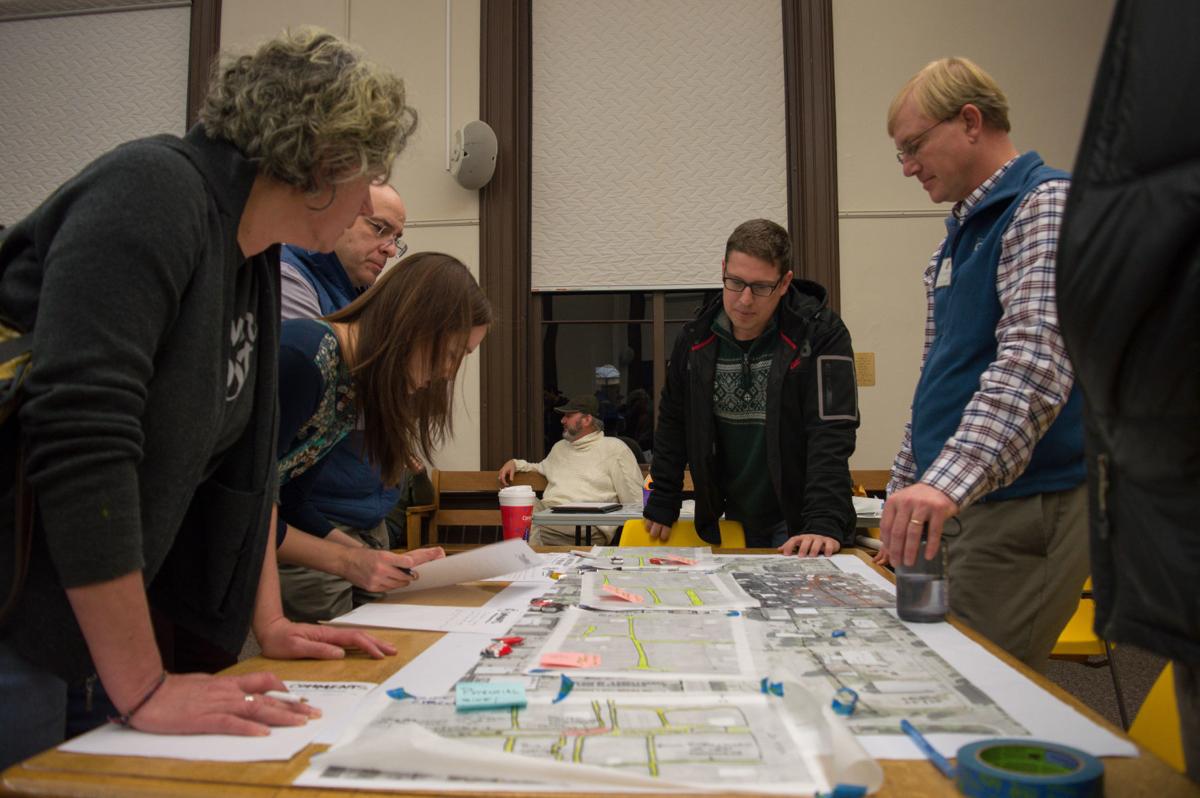 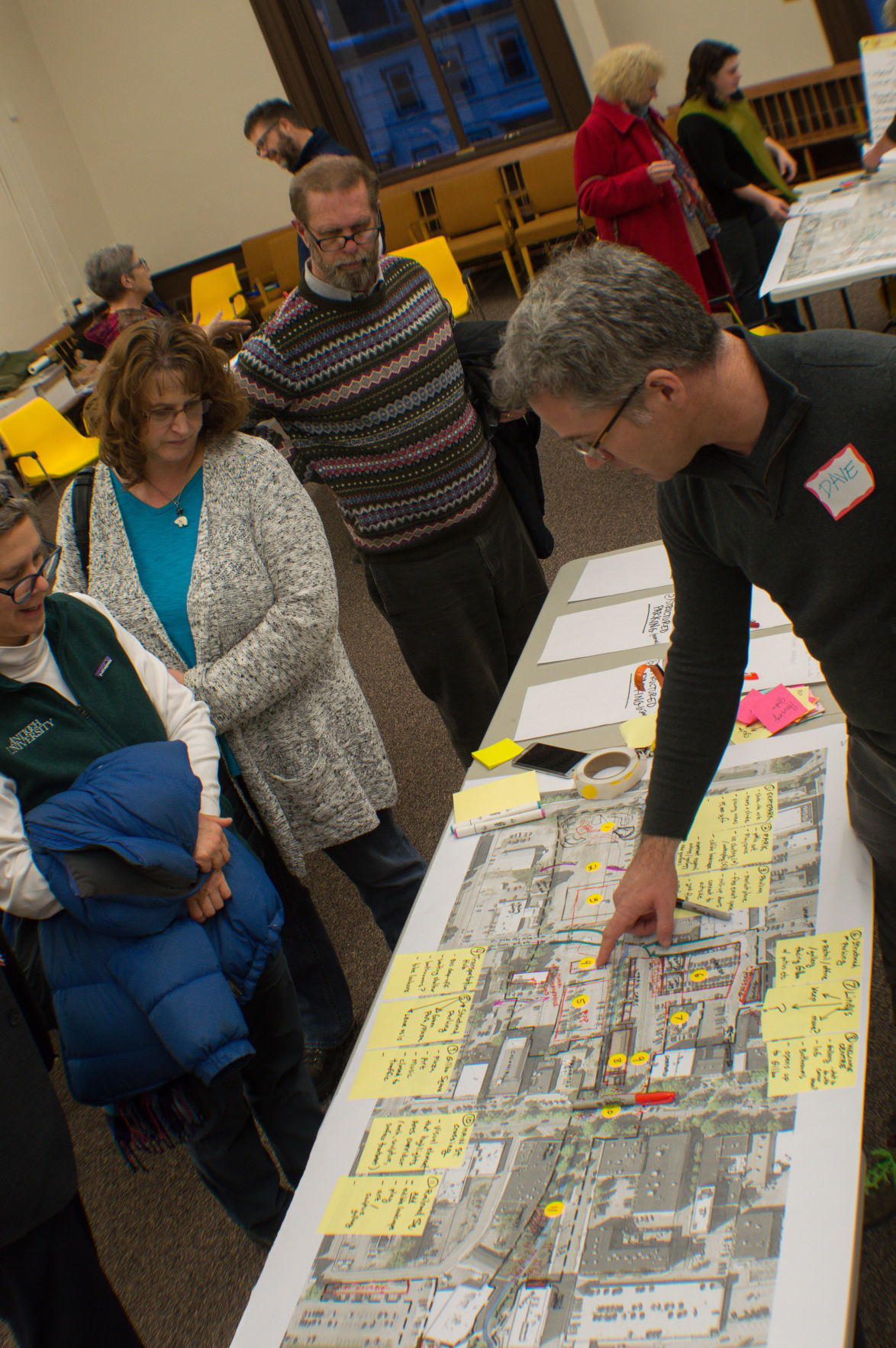 David Hohenschau of Community Workshop LLC explains the draft plans for the arts and culture corridor being proposed for Keene, which were produced Wednesday after additional public input. 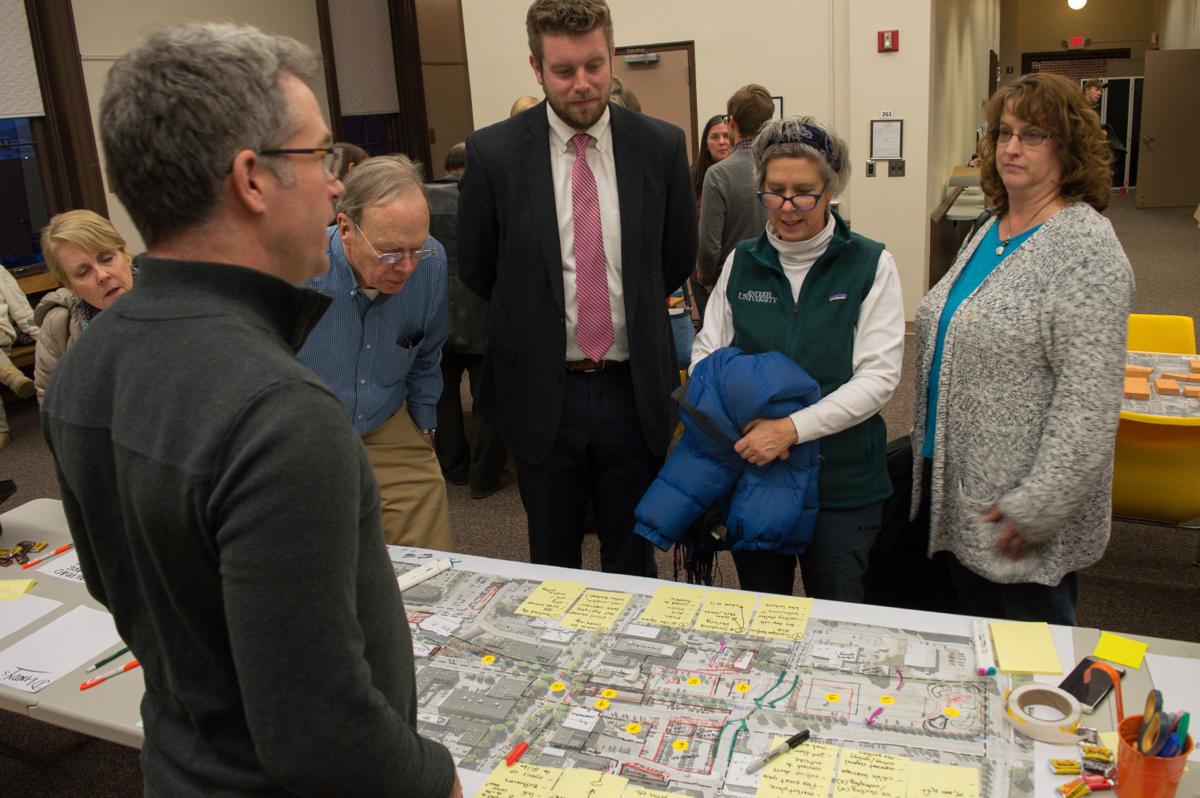 From left, David Hohenschau of Community Workshop LLC explains the draft plans for the arts and culture corridor being proposed for downtown Keene, which were produced Wednesday after additional public input, to Mayor-elect George S. Hansel, center, and Keene residents Laura Andrews and Faith Wilder.

Brud Sanderson, left, an engineer with Stevens & Associates in Brattleboro, and Todd Horner, a planner with the Southwest Region Planning Commission, work during Wednesday's charrette on the proposed Keene arts and culture corridor. The event, which drew input from members of the public, was held at the old courthouse.

The team working on an arts and culture corridor being proposed for downtown Keene hosted a charrette in the old courthouse Wednesday to draw input from people in the community.

David Hohenschau of Community Workshop LLC explains the draft plans for the arts and culture corridor being proposed for Keene, which were produced Wednesday after additional public input.

From left, David Hohenschau of Community Workshop LLC explains the draft plans for the arts and culture corridor being proposed for downtown Keene, which were produced Wednesday after additional public input, to Mayor-elect George S. Hansel, center, and Keene residents Laura Andrews and Faith Wilder.

The second floor of the old county courthouse at the corner of Winter and Court streets was abuzz Wednesday as Keene’s arts and culture corridor was elevated from a concept to sketched-out designs.

Monadnock Economic Development Corp. is spearheading the proposed corridor, with the help of city staff and two Vermont-based consulting firms: Community Workshop and Stevens & Associates. The team hosted a daylong charrette Wednesday to bring community leaders, business owners and residents together to continue discussions on the project and configure the preliminary layout.

Its footprint would stretch from Gilbo Avenue across Main Street and down Railroad Street. Ideas floated Wednesday for the corridor included a 15,000-square-foot skate park, public art and sculptures, a pavilion, a parking deck, outdoor patio seating, a welcome center with public restrooms, play areas for children, a transportation hub, a park with a water feature, and artist residences.

In an interview with The Sentinel’s editorial board this summer, MEDC President John G. “Jack” Dugan said the goal is to help revitalize downtown Keene and support the area’s vibrant arts community. He’s estimated the project would cost around $30 million and has said the organization plans to use grant money and tax credits to help fund it.

City residents Laura Andrews and Faith Wilder attended Wednesday’s open house to get their first look at the sketches after hearing so much about the corridor. Both women work at Antioch University New England and lauded the idea of upgrading the downtown, which Andrews called the city’s core. She said she’s most excited about the art installations, performance spaces and built-in areas for people to gather around pop-up businesses, such as food trucks.

Four stations at the old courthouse were covered with sketches and invited attendees to write their suggestions. Each was staffed by a consultant, who led participants through a brainstorming session earlier in the day, then incorporated their ideas into the preliminary designs on display.

Rebecca Stone of Community Workshop said her group focused on the art and play aspects of the corridor. How could the outdoor amphitheater near the Monadnock Food Co-op be better utilized? If Gilbo Avenue is restructured, could the farmers market move to the pavilion that has been pitched for construction toward the corridor’s west end? Rather than artist residences, would shared studios with spaces for rent serve the community better?

“All of this is just tossing stuff out for reactions right now,” Stone said.

In a nod to the city’s railroad history, her table also included plenty of ideas involving trains. People responded positively to an idea Dugan pitched earlier this year about incorporating rail cars, she said, and they actually proposed putting them throughout the corridor rather than in just one section. A caboose could be used in a play area for children, Stone noted, and other cars could be reserved for pop-up art galleries or restaurants.

Mark Westa with Stevens & Associates in Brattleboro detailed three potential options for the corridor’s welcome center, which is tentatively planned for the city-owned building at 12 Gilbo Ave. that houses Yolo Frozen Yogurt and the former transportation center.

The three designs feature multiple contingencies for a small but central piece of the corridor:

In one, an arch stretches diagonally over a new pedestrian walkway crossing Main Street, and the welcome center extends to the sidewalk, overtaking the Corner News building.

Another plan prepares for the possibility of a parking structure in the lot on Gilbo Avenue, and moves Lindy’s Diner behind the welcome center, which no longer reaches the sidewalk. Main Street is reduced to one lane heading south, and the entry arch is more prominent.

A third design leaves Lindy’s and Corner News where they are, and there is no arch, instead marking the entrance to the corridor with train cars on Railroad Street. This mockup, however, allows Gilbo Avenue to remain partially open, with one-way traffic traveling west.

Dugan said Wednesday that, like many of the ideas that were incorporated into the sketches, the prospect of absorbing Corner News into the welcome center came from attendees’ suggestions.

But he stood by his prior statements to the proprietor.

“As I said to [building owner Roberta Mastrogiovanni] before, even as of tonight, we don’t have an interest in her building,” he said.

In Mastrogiovanni’s effort to buy the land under the Corner News building she owns at 2 Gilbo Ave., her lawyer Joseph S. Hoppock told a City Council committee last month that Dugan had confirmed to Mastrogiovanni that the corporation didn’t have plans for Corner News in its arts corridor project. The City Council approved the negotiation of the sale.

The parking deck also stemmed from the brainstorming session. It’s possible, Dugan said, that the corridor could bring more people and vehicles downtown, which might necessitate more parking.

“It’s a much bigger discussion for the city to have. We don’t want to build a parking garage. We’ll do all the other stuff,” he said, laughing, of MEDC’s role in the project.

Dugan said he hasn’t yet spoken to the new owners of Lindy’s, who bought the diner Nov. 18, though he had been discussing the arts corridor with the prior owners. They were concerned that the removal of parking from in front of their building might negatively affect business, Dugan said, and there were cursory conversations about moving the diner or orienting it differently. But he also noted that the diner could benefit from the potential foot traffic of the project.

Over at Brud Sanderson’s table, the Stevens & Associates engineer fielded questions from attendees about changing the traffic patterns. He also had three potential plans at his station, two of which involved closing Gilbo Avenue between Main and School streets; opening the pedestrian alley of Lamson Street to cars; using Federal Street (next to Comic Boom) as an access point for vehicles to Lamson; and connecting Wilson Street to Gilbo Avenue by either intersection or roundabout.

In the third option, Gilbo Avenue between St. James and Main streets would remain open to one-way traffic traveling west, as portrayed in one of Westa’s welcome center designs.

Sanderson said the question going forward will be whether the goal of increasing pedestrian activity outweighs any concerns about the traffic flow.

“We want people on their feet, not in their cars,” he noted.

But many of the attendees’ comments at Sanderson’s table focused heavily on the potential Gilbo Avenue closure, with a couple of people deeming it a waste of money and others encouraging at least one-way traffic.

David Hohenschau of Community Workshop noted that the original concept was to close the road, so that’s what the consultants have primarily worked toward. At the brainstorming session that morning, he said, a quick poll of two dozen or so people revealed about 70 percent support for shutting down that portion of Gilbo, with another 15 percent unsure.

Some skepticism, however, is “classic with any master plan, urban project,” Hohenschau said, often requiring multiple rounds of public input and discussion before a consensus is reached.

While the traffic issue is mulled over, he said his team will move forward with the rest of the corridor. After collecting Wednesday’s input, the team will narrow down the amenities and tweak the sketches, submitting two potential designs for the project if necessary.

“All we’re really doing is creating a tool for Jack [Dugan] and the rest of the city to use as a concept,” Hohenschau said. “... At the end of the day, what we’re trying to do is create the vision.”

Crucial to that vision, though, is the pedestrian aspect, according to Dugan.

“I think, if Gilbo is not closed, it basically takes the central theme of what we’re trying to accomplish out of the picture, and it makes us question as to whether we would like to be involved in a project that does that,” Dugan said.

He also noted that Wednesday’s charrette was not the only public outreach, and said the idea of closing Gilbo has received majority support from the hundreds of people his team has encountered over the past few months.

Dugan called the turnout at both the morning brainstorming session and the evening open house impressive, representing a diverse crowd of city and county staff and elected officials, business owners, people from the arts community and curious residents. While some of the ideas presented might be “well beyond our control,” Dugan said, he felt invigorated by the interest in entrepreneurship opportunities, arts spaces and the aesthetic amenities “because it reinforced this idea that we want people on foot.”