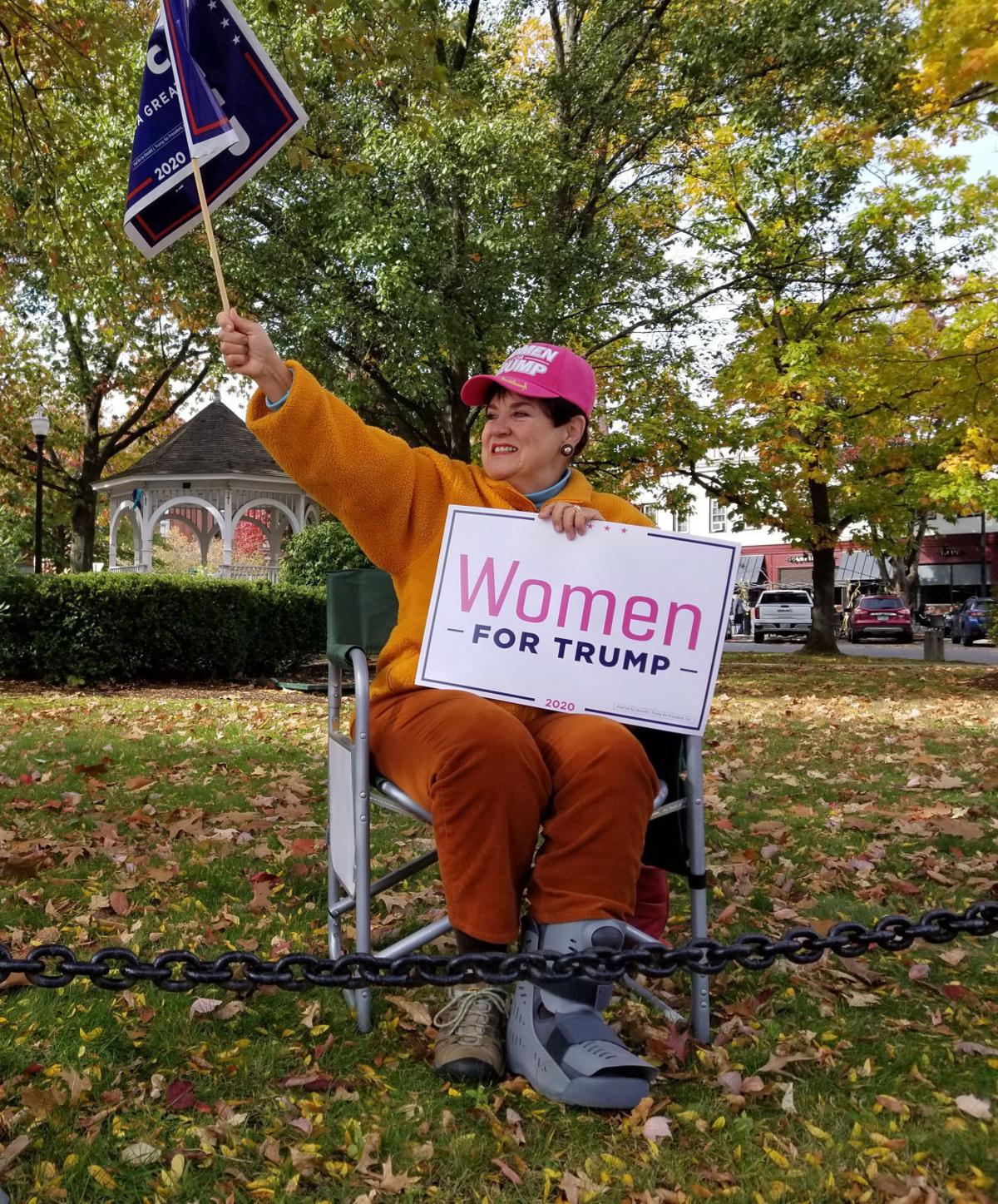 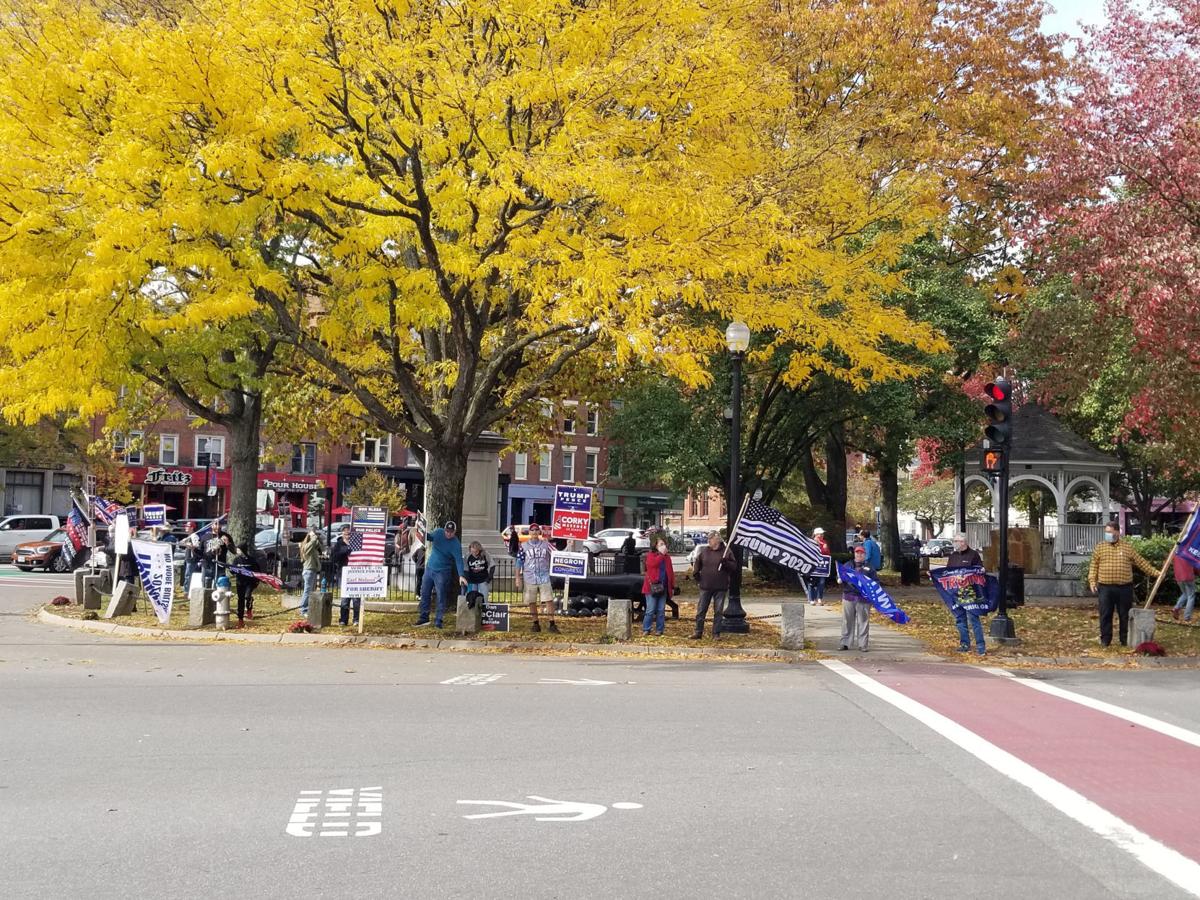 About 50 people rallied in Keene’s Central Square Sunday in support of President Donald Trump and other Republican candidates. 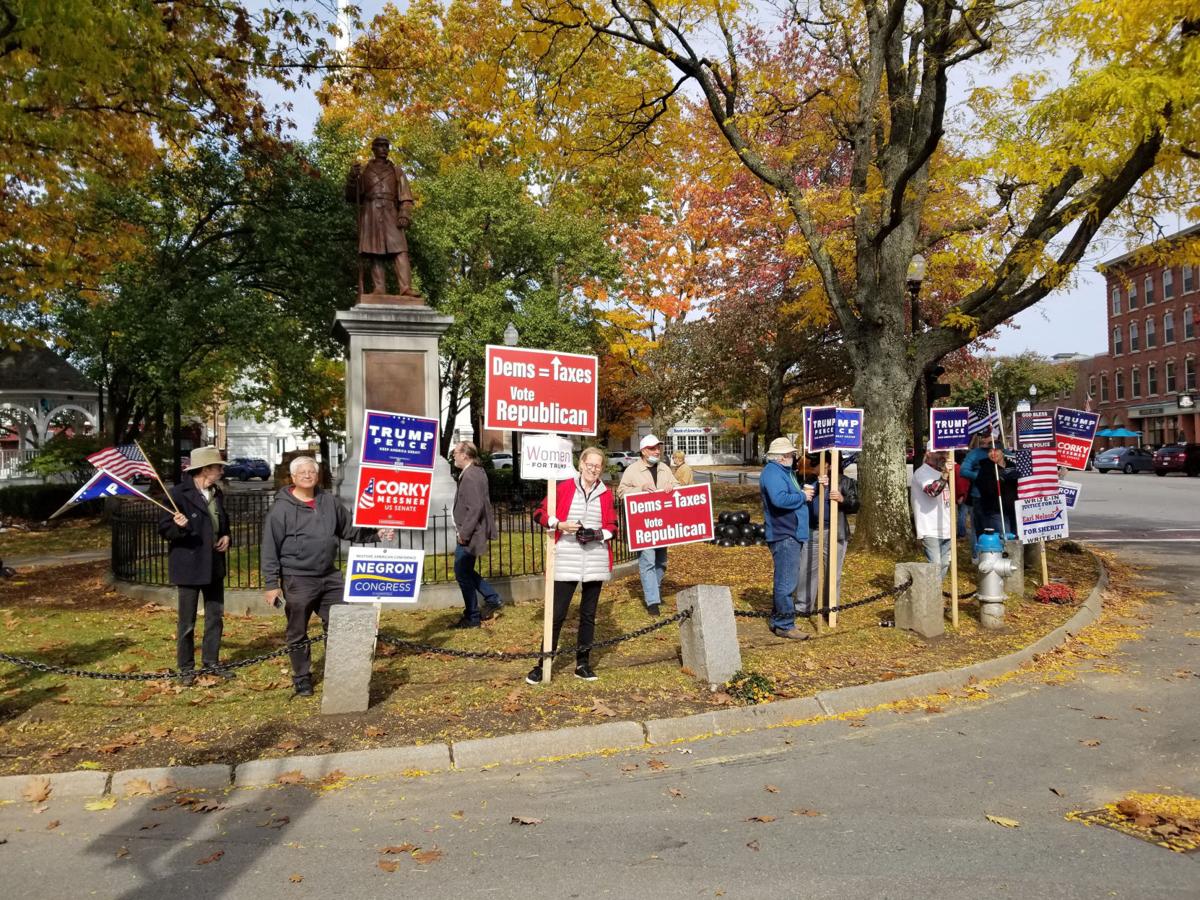 About 50 people rallied in Keene’s Central Square Sunday in support of President Donald Trump and other Republican candidates.

Just over two weeks before Election Day, Ramona Branch is confident voters will give President Donald Trump another four years in office.

“Oh, I think the president will win,” Branch, a retired photojournalist who lives in Dublin, said, adding she believes independent voters throughout the country will lean Republican in the Nov. 3 general election.

Branch, who chairs the Dublin Area GOP, based in eastern Cheshire County, was one of about 50 people who gathered on Keene’s Central Square Sunday afternoon to rally support for Trump, as well as state and local Republican candidates. And like Branch — who donned a bright pink “Women for Trump” hat, and carried a sign with the same message — others at the event expressed their enthusiasm, and optimism, for Trump’s re-election bid.

David DeWitt, another retired Dublin resident who worked with the Dublin Area GOP to organize the rally, said he feels “fantastic” about Trump’s chances.

“I think a lot of times, Trump supporters, they don’t want to talk to pollsters,” he said.

Fred Giaimo of Dublin, who stood just south of Central Square Sunday afternoon holding a handmade wooden Trump sign, said he doesn’t agree with Trump 100 percent of the time, he still supports the president enthusiastically, and believes local Republicans do, too.

“Sometimes I don’t agree with his tact, but I’m willing to disregard that to a certain degree, because of his accomplishments,” he said, adding he especially likes Trump’s record on foreign policy and international trade agreements.

The Dublin Area GOP has organized similar events over the past few weeks in Jaffrey, Peterborough and Keene, DeWitt said. Richard Merkt, a Republican running for the N.H. House in Cheshire District 1, said he attended the group’s previous event in Keene, and was pleased with the amount of positive support they received.

Sunday’s rally drew frequent honks from passing cars, but Merkt, a 71-year-old Westmoreland resident, said he was concerned about others who expressed their displeasure with the president in less civil ways. For example, Merkt said he lamented the recent reports of vandalism and theft of campaign signs in Keene.

“I take great offense at that because it’s a violation of somebody’s, anybody’s, free speech,” he said. “... Civil political discourse has really almost disappeared.”

Phil Hebert, a retired teacher from Keene, was the lone Democratic supporter on Central Square at the beginning of the Republican rally Sunday, and said he’s committed to promoting decency in politics. Hebert, who was holding a handmade sign supporting Biden and vice presidential nominee U.S. Sen. Kamala Harris of California, said he comes downtown almost every day to quietly show his support for the Democratic ticket.

“I’m willing to stand amongst anybody,” Hebert said of the crowd of Trump supporters Sunday. “And I respect their views.”

As the presidential campaign heads into the final stretch, the Dublin Area GOP plans to host similar rallies the next two weekends in Rindge and Peterborough.

“Our country is going to be great again,” Branch said, echoing the president’s campaign slogan, “and we are going to be the America that our forefathers planned.”