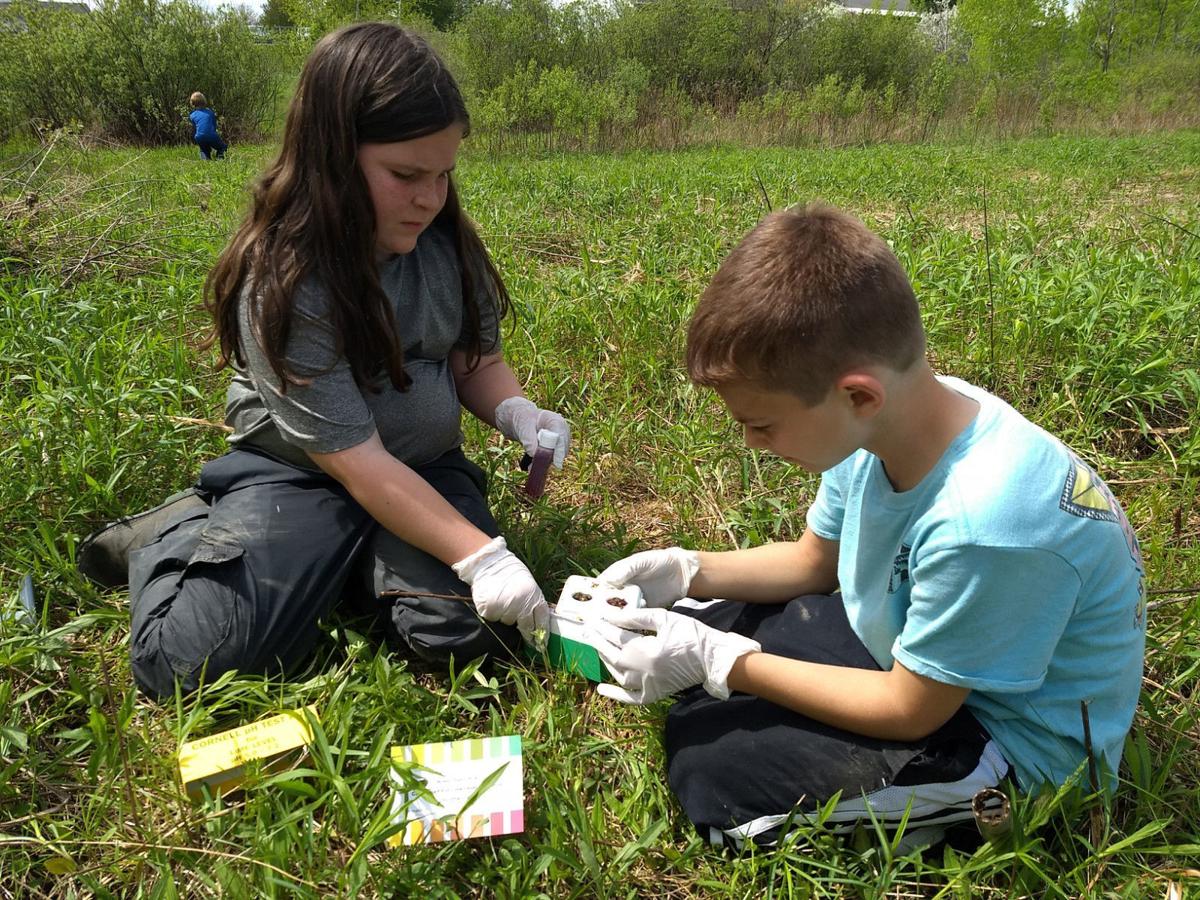 Elise Pratt and CJ Tustin, 5th-graders at Chesterfield School, do a soil pH test in the school’s outdoor learning space. 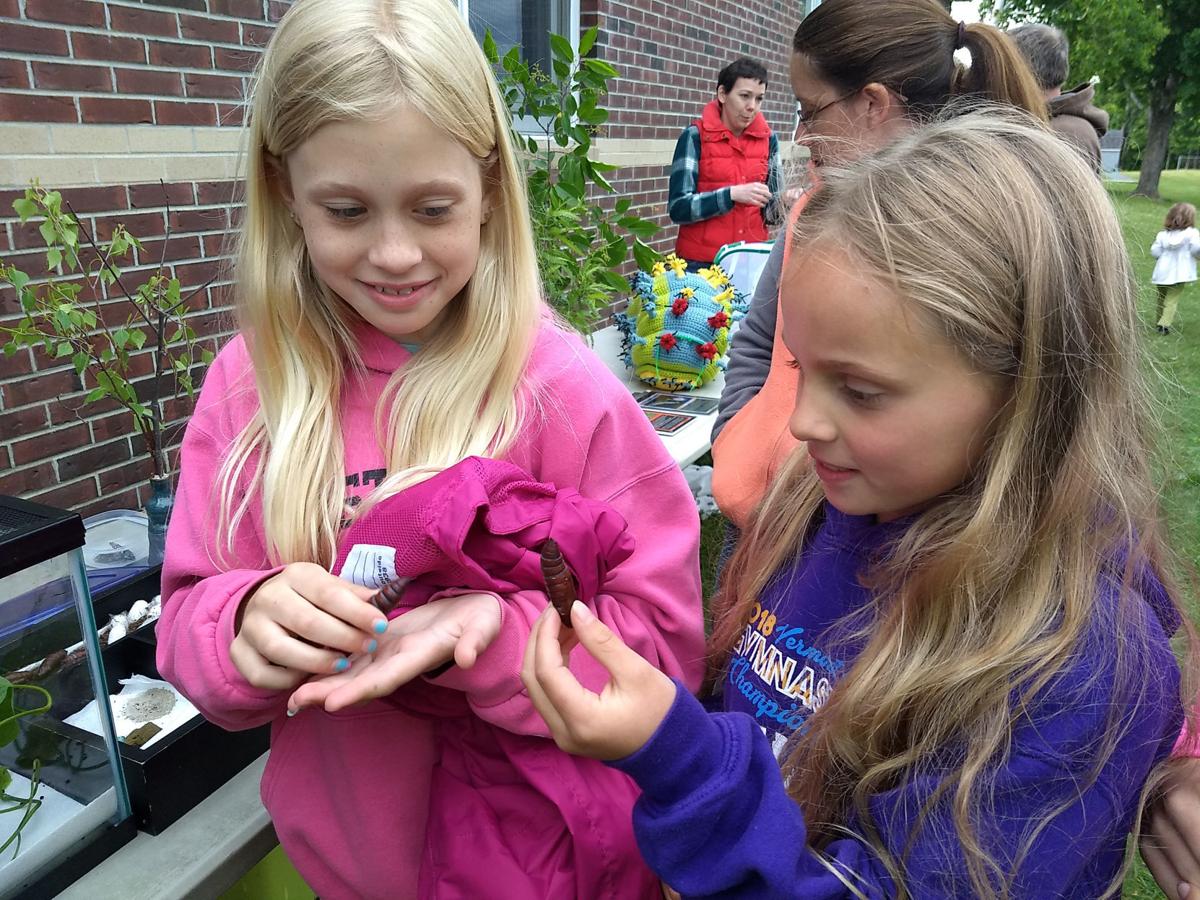 From left, 4th-graders Kate Hennigan and Lily Vitters handle some caterpillars at the Caterpillar Lab station during a recent open house the Chesterfield School held for families to find out more about students’ educational opportunities outside the elementary’s walls. 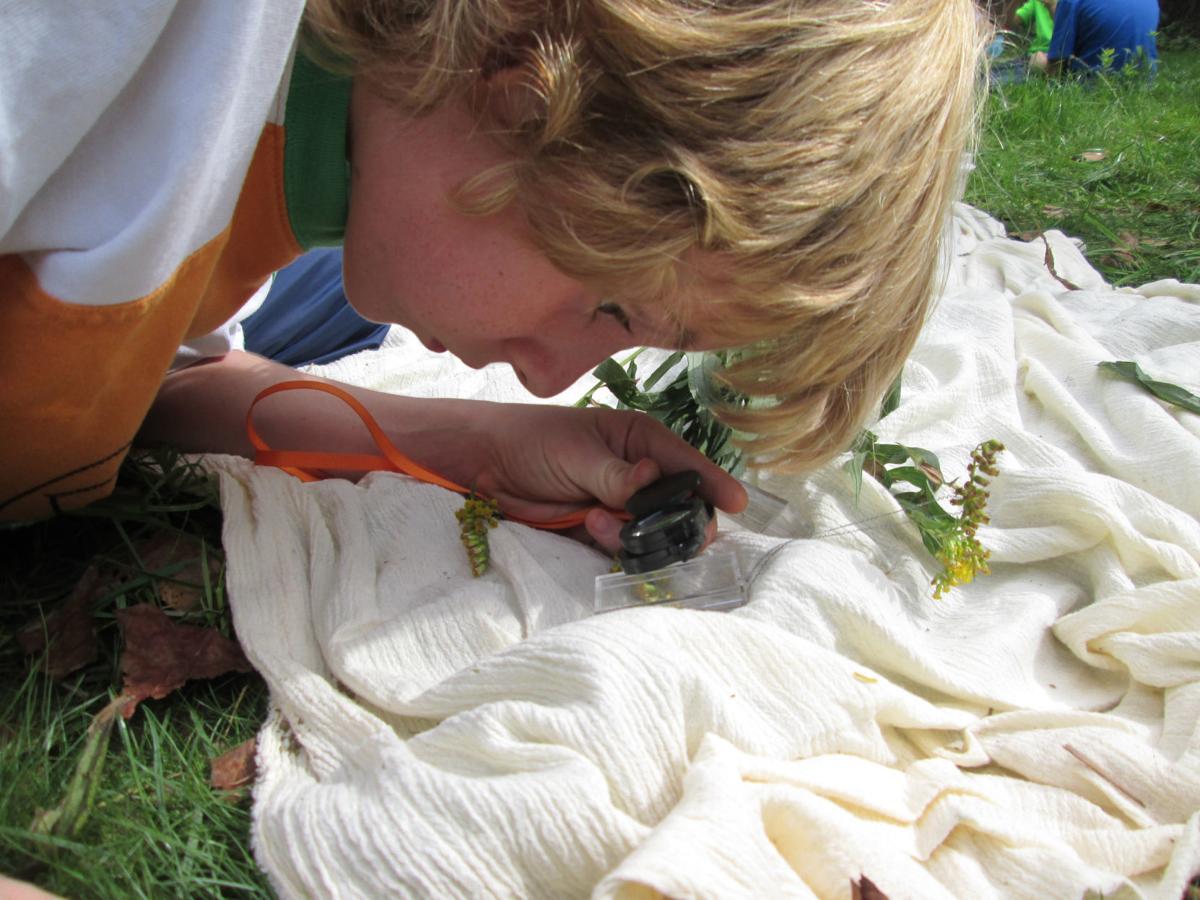 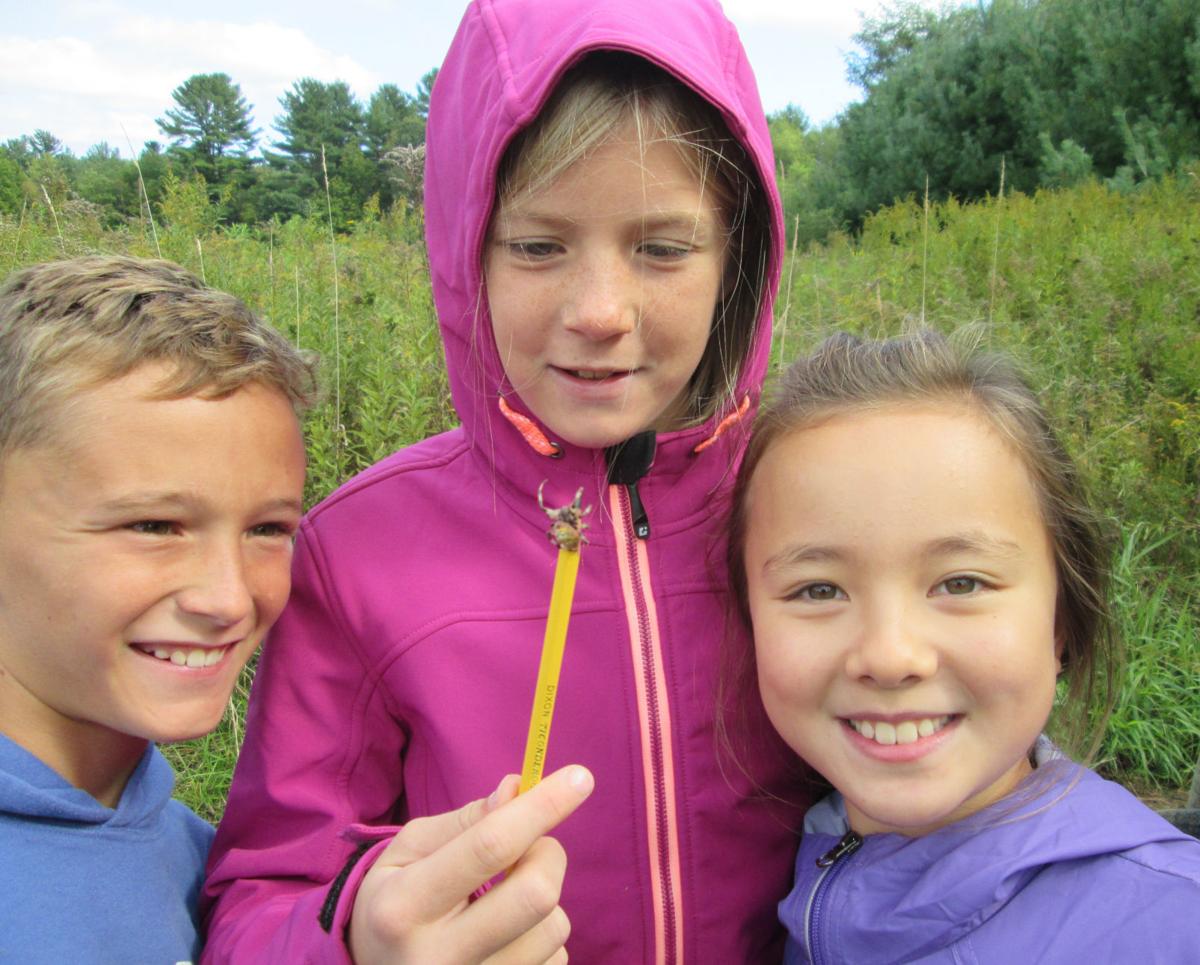 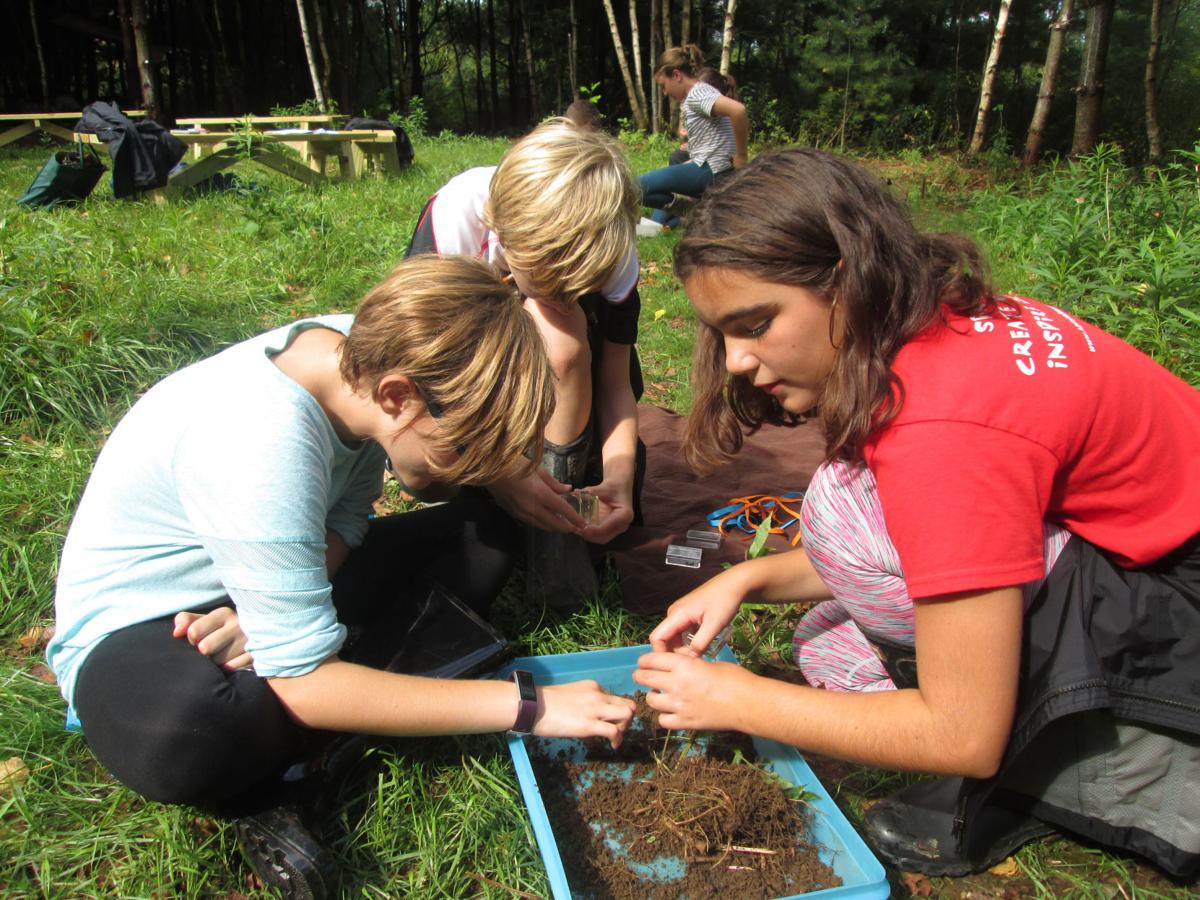 From left, 5th-graders Taryn Madden, Graham Dunsford and Bella Fortier explore the creatures in the rootball of a goldenrod plant in one of the Chesterfield School's outdoor classrooms. 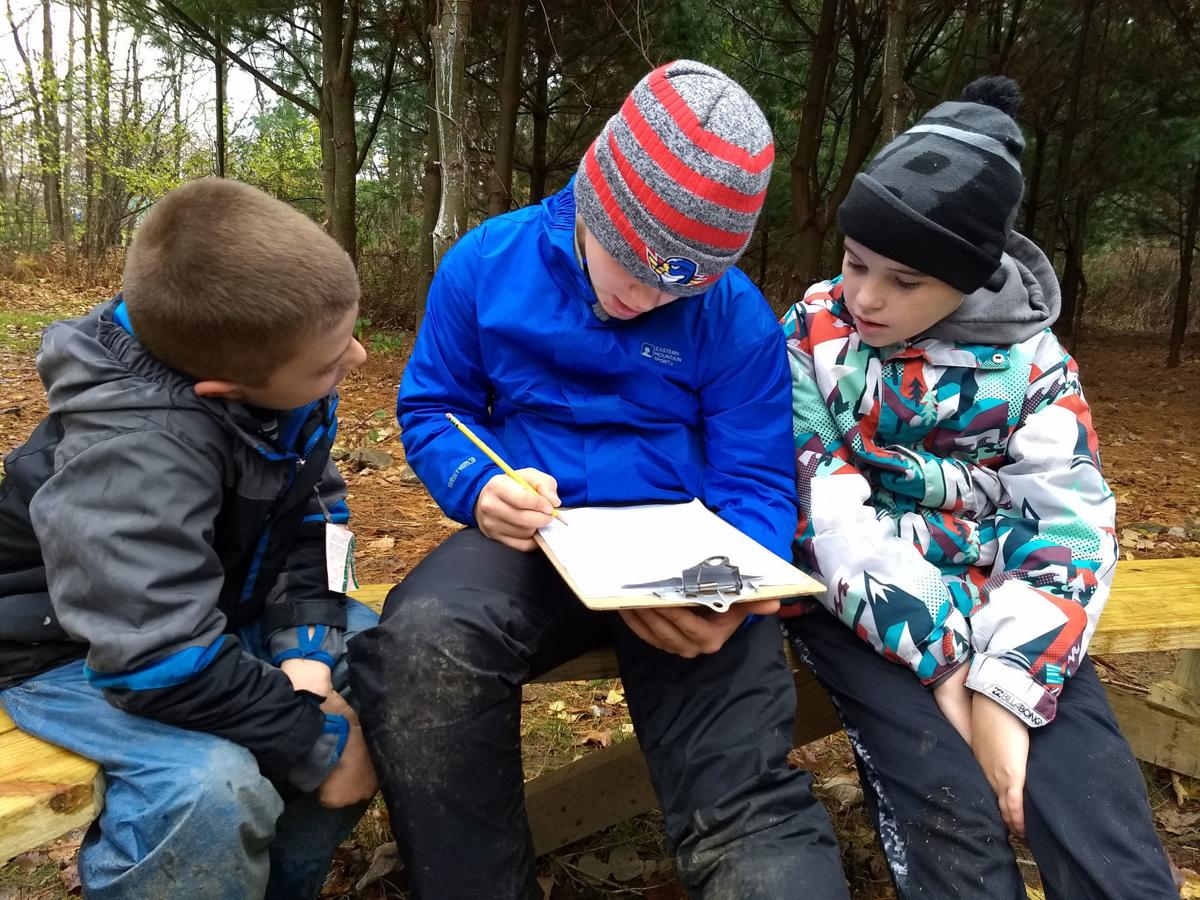 Elise Pratt and CJ Tustin, 5th-graders at Chesterfield School, do a soil pH test in the school’s outdoor learning space.

From left, 4th-graders Kate Hennigan and Lily Vitters handle some caterpillars at the Caterpillar Lab station during a recent open house the Chesterfield School held for families to find out more about students’ educational opportunities outside the elementary’s walls.

From left, 5th-graders Taryn Madden, Graham Dunsford and Bella Fortier explore the creatures in the rootball of a goldenrod plant in one of the Chesterfield School's outdoor classrooms.

CHESTERFIELD — At Chesterfield School, not all classrooms have walls. Some have traded hallways for trails and ceilings for the open sky.

And it’s all thanks to a neighboring parcel that has become an epicenter of outdoor learning — and soon, the subject of a documentary.

Voters approved the $89,500 land purchase from town resident Betsey Chickering at the district’s annual meeting in March 2017. And in the time since, teachers have begun using the 21.7-acre plot of fields and forest in increasingly creative ways, according to Laura White, a 5th-grade science teacher.

This year, White’s students spent 90-minute sessions outside each week for hands-on learning about topics being covered in the classroom, such as food webs, matter cycling and energy flow.

Though White said many of the school’s teachers were already incorporating outdoor education at nearby Pisgah State Park and the town forest into their classes, having the adjacent land has made getting outside much simpler. Two “outdoor classrooms” have been outfitted with benches, and trails run throughout the area.

“What’s been really amazing with this new purchase of land is it’s now school property, so legally, we don’t need to go through the permission-slip process,” White said. “We can just go out when we want to.”

There’s no stipulation that teachers must use the land — or requirements on the ways they can employ it — but classes across every grade level have been getting outside, White said.

The projects have been wide-ranging, from 4th-graders who learned about mammal tracking with Hancock’s Harris Center for Conservation Education to 7th-graders who built a wigwam as part of their Native American studies unit.

From White’s perspective, there are a number of benefits to outdoor learning; apart from giving students an opportunity to get away from their desks, it helps make curriculum work more hands-on and engaging.

And then there are the unexpected educational opportunities that come from being in nature, when every animal sighting or trail of tracks is a chance to learn.

Last week, the school held an open house for families to come explore the two outdoor classrooms and learn about what their children have been up to. After touring the trails, they were invited to stay for a picnic and check out outdoor learning stations from the Harris Center, the Caterpillar Lab of Marlborough and outdoor-education school Kroka Expeditions of Marlow.

According to Principal Sharyn D’Eon, the event also provided an opportunity for parents to see in action the spontaneous learning White referred to.

“The kids were so excited because there was bear scat down there, and it wasn’t planted there — we actually had a bear walk through the land,” D’Eon said. “So the kids identified yet another mammal that’s living within their backyard, so it really has made some of the learning very real.”

The community has been involved in planning for the land’s future, too.

Parent Liza Lowe is a member of Chesterfield School’s land-use subcommittee, a group comprising staff, parents and school board members that has been coordinating infrastructure needs for the space. So far, in addition to clearing the trails and building the benches for the outdoor classrooms, volunteers have worked with the school to gauge needs for future projects.

Lowe, who has a 4th-grader at the school, is also the founding director of Wild Roots Nature School, a nature-based childcare center in Chesterfield. She said that as a parent, it’s exciting to see outdoor learning become a more integral part of the Chesterfield School’s curriculum.

“This movement for more nature-based and outdoor education benefits the children, and I think eventually — and to some degree already — the greater community,” Lowe said. “It’ll be interesting to see how more and more community members get involved.”

Lowe also played a role in connecting the school with Antioch University New England, which was looking for a subject for a short documentary about place-based education.

Chesterfield filmmaker Chris Hardee, who is an alumnus of the Keene graduate school, has been working on the 15-minute film, “Turning School Inside Out,” since the beginning of the school year. It chronicles the evolution of Chesterfield’s outdoor education initiatives.

According to Ellen Doris, an education faculty member at Antioch, the documentary is supported with funding from the Wyoming-based George B. Storer Foundation.

“We were excited to be able to make a film that really focused on what happens when a whole school and the school’s community really commits itself to figuring out how to use land to improve the educational and social and emotional and physical lives of its students,” Doris said.

Antioch’s education program places emphasis on place-based learning, she said, and allows students to focus on nature-based early childhood education. And from the university’s perspective, what’s happening in Chesterfield is “terrifically exciting.”

“This felt like a really special moment to capture, where it was early in this process of the land being acquired and the community meeting to envision what was possible there,” she said.

This is the second project Hardee has worked on for the university, he said. The first, “Best Day Ever,” followed kindergarten programs in Vermont in which students spend one day outside a week.

Over the course of filming this latest documentary, he said he’s been impressed with how the school has welcomed the new learning opportunities provided by the land.

“I think it’s been pretty substantial and amazing how quickly the teachers who may have not thought too much about teaching outdoors in the past have really embraced the fact that it’s there,” he said.

Hardee said he hopes to finish the film sometime in the fall. Once completed, it may be used as an educational or community engagement tool, according to Doris. The university’s previous documentary was shown at film festivals and broadcast on public television stations in Vermont and Maine, she said.

For Chesterfield School, it’s exciting to think that through the documentary, these initiatives could have “another level of impact,” White said.

“A lot of the teachers here are doing more outdoor-based programming because they are experiencing what benefits it has for their kids, and they’re seeing that firsthand,” she said. “But now maybe, that benefit will be a bit bigger of a ripple effect if what we’re doing here can be shared elsewhere.”