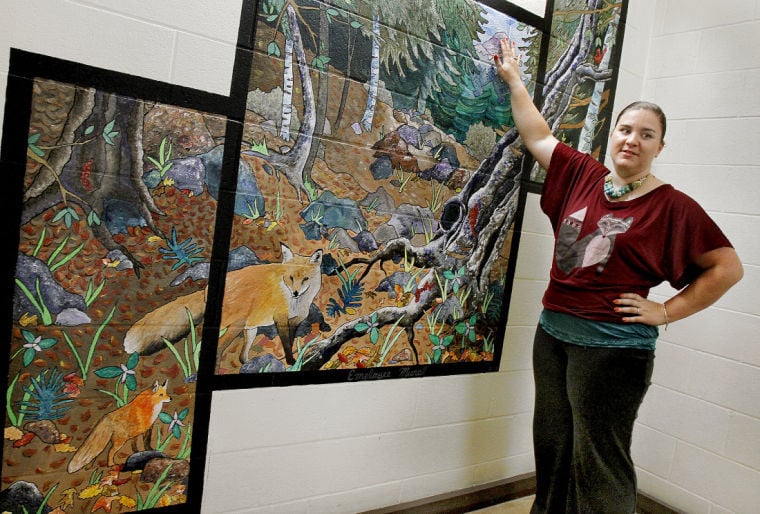 Artist Emily Sodders, of Gilsum, talks about the murals on six levels of stairwell at Cheshire Medical Center/Dartmouth-Hitchcock Keene on Saturday. Sodders did a good portion of the painting and oversaw the rest of the work done by hospital employees and fellow artists. 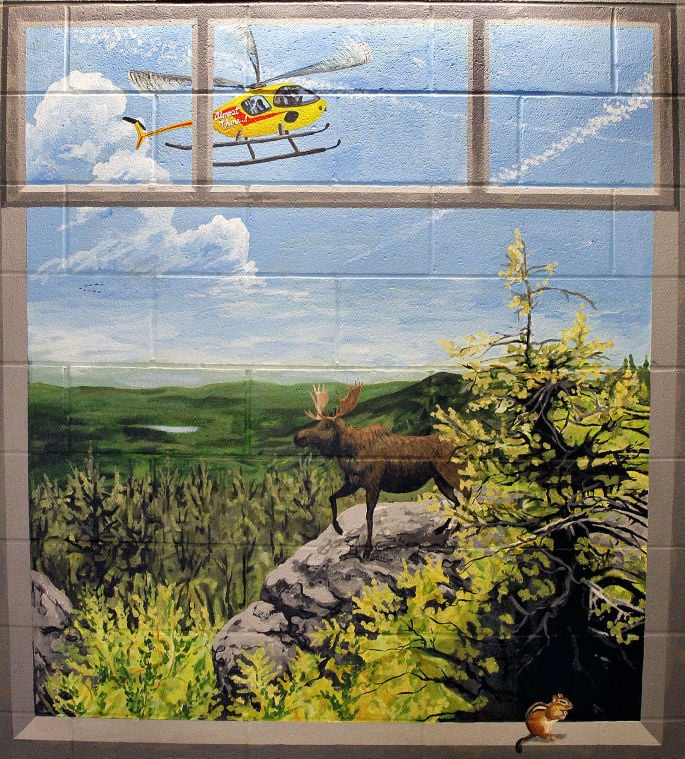 One of the Cheshire Medical Center/Dartmouth-Hitchcock Keene stairwell murals overseen by artist Emily Sodders, of Gilsum. 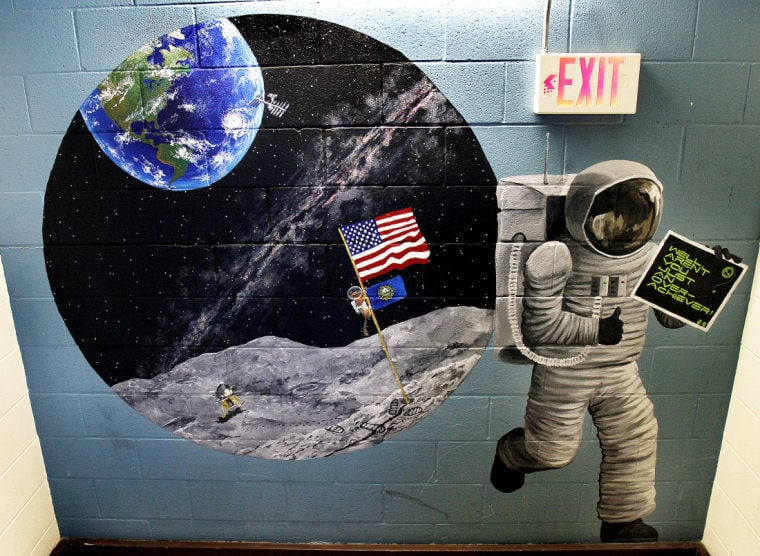 This mural in the 6th floor stairwell at Cheshire Medical Center/Dartmouth-Hitchcock Keene was done by artist Emily Sodders, of Gilsum.

Artist Emily Sodders, of Gilsum, talks about the murals on six levels of stairwell at Cheshire Medical Center/Dartmouth-Hitchcock Keene on Saturday. Sodders did a good portion of the painting and oversaw the rest of the work done by hospital employees and fellow artists.

One of the Cheshire Medical Center/Dartmouth-Hitchcock Keene stairwell murals overseen by artist Emily Sodders, of Gilsum.

This mural in the 6th floor stairwell at Cheshire Medical Center/Dartmouth-Hitchcock Keene was done by artist Emily Sodders, of Gilsum.

The sky’s the limit for local art in area hospitals — literally.

The mural in Cheshire Medical Center/Dartmouth-Hitchcock Keene’s stairwell A starts below the ground and goes all the way to outer space. The mural, painted to resemble a hike up Mount Monadnock (and beyond), was unveiled last week and painted by local artists and hospital staff.

And Brattleboro Memorial Hospital recently partnered with a Vermont organization to hang local art on its walls.

The mural at Cheshire Medical Center/Dartmouth-Hitchcock Keene started as part of its Healthy Monadnock 2020 goals.

The hospital has a “Take the Stairs” campaign to encourage employees to get some exercise into their day, according to its Worksite Wellness Manager Jennifer Begley.

People are more apt to take the stairs if they have something nice to look at, she added. “If you can beautify the stairwell it makes it a more inviting place to go.”

There are a total of six murals, one for each floor of the hospital. Two of the murals were painted by a mix of hospital staff, overseen by local artist Emily Sodders.

Sodders, who lives and works in Gilsum, was first contacted about the project a few years ago. She said painting the walls of the stairwell took a long time “on purpose” so as not to disrupt the everyday business of the hospital too much.

Originally, hospital officials were considering a tropical theme for the stairwell, but it was instead decided the series should have a local focus, Sodders said.

But the bright colors are still there, a glow of light in a cave and a forest floor strewn with red and yellow autumn leaves.

“It’s a hospital,” said Sodders. “We wanted it to be cheery.”

For people climbing the many flights of stairs, there are also little notes of encouragement painted into some of the murals.

Sodders did two of the murals by herself, finished one started by another local artist, and oversaw the creation of two employee-painted murals. Yet another was painted by Katherine Thorell, an artist and friend of Sodders.

The large majority of hospital employees who painted the murals had never painted before, but many told Sodders it was a great experience, she said.

“Most people came in on their lunch breaks,” she said. “They’re already tired. A lot of people said it was therapeutic.”

Sodders said some of the staff were nervous to do something they had never done before, but that they had a lot of fun with the painting.

Begley said she also heard good things from employees about being involved in the painting.

“For the majority of folks, this was new and different and it was really a creative way to try something new,” Begley said. “They loved it; they found it relaxing.”

Across the river, Brattleboro Memorial Hospital has its own local art initiative to brighten up the walls.

Over the summer, that hospital received more than two dozen pieces of Vermont artwork to display from the Susan Sebastian Foundation, based in Williston, Vt.

Susan Sebastian was born at Brattleboro Memorial Hospital in 1956. Throughout her life, she battled a long illness and spent a lot of time in hospitals because of it.

After Sebastian’s death in 2008, her mother, Elise Braun, of Waterbury, Vt., started a foundation in her daughter’s name, purchasing and donating local works of art to hospitals.

Brattleboro received 27 pieces of artwork this year, according to a hospital news release.

“By showcasing local artists, BMH strengthens (its) connection to the community, supports area artists and engages the broader community in appreciation of art,” said hospital spokeswoman Nicole Zinn in an email interview.

At Cheshire Medical Center, the paintings in Stairwell A are encouraging more people to take the stairs instead of the elevator, according to Begley and Sodders.

Begley said for laboring mothers in the hospital, the hospital’s midwives sometimes take them for walks up and down the stairs to show them the mural.

Sodders said some of the staff who worked on the mural told her they encourage all their clients and co-workers to come visit the paintings whenever they can.

“It is a destination,” she said.