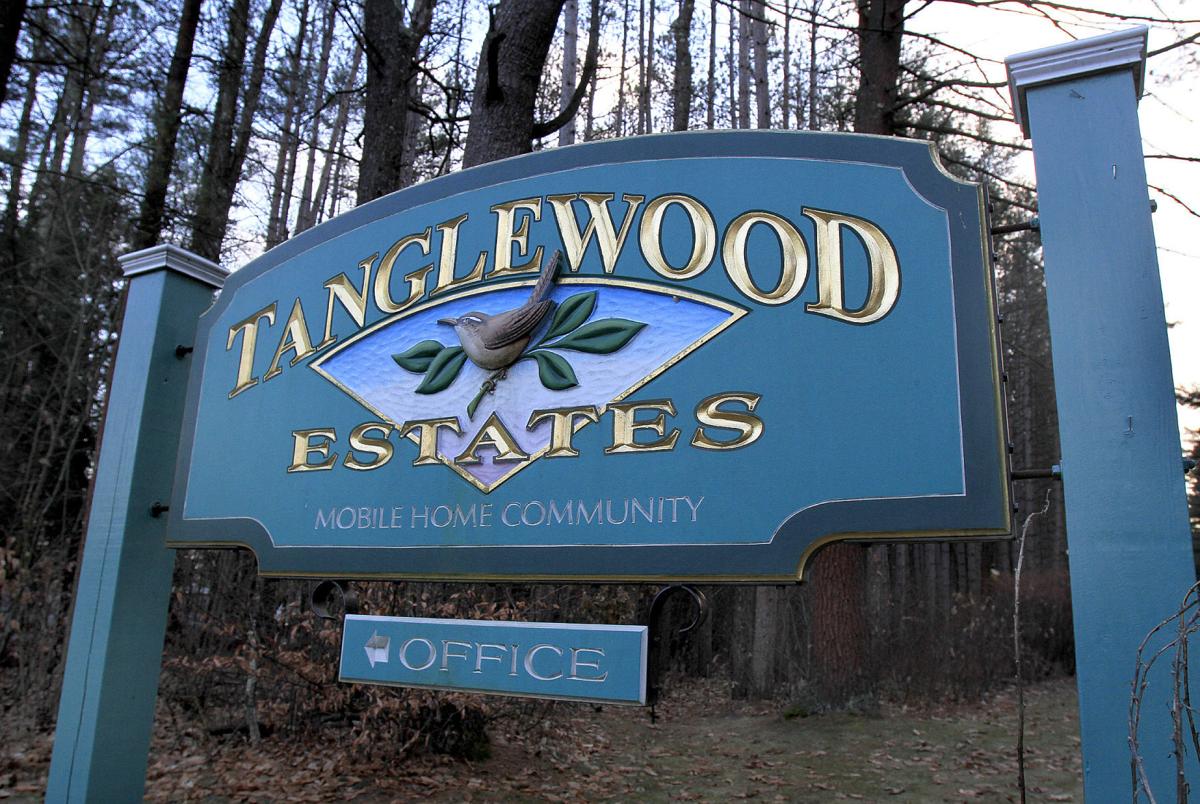 A sign marks the entrance to Tanglewood Estates off Maple Avenue in Keene. 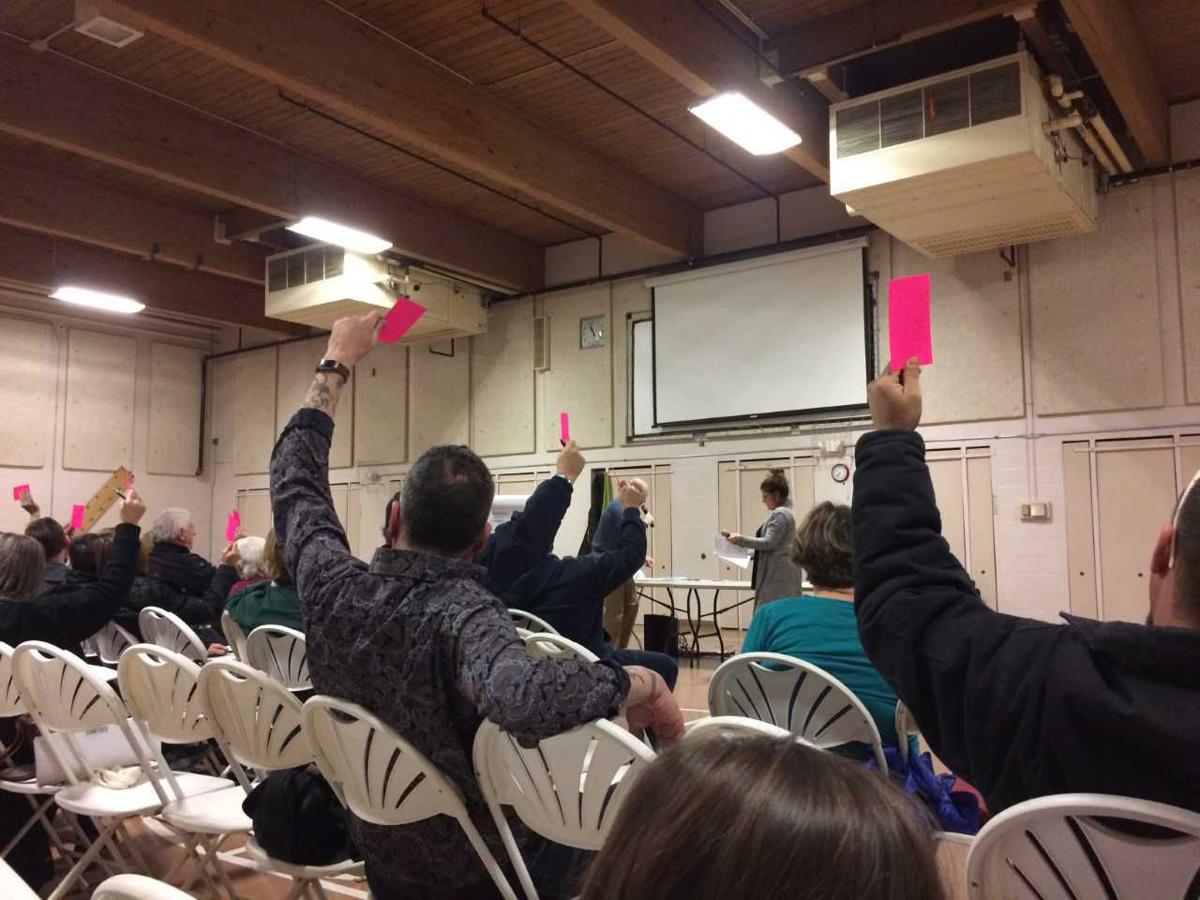 Members of the new cooperative for Tanglewood Estates in Keene vote on bylaws Tuesday during a meeting at the Jonathan Daniels Preschool.

A sign marks the entrance to Tanglewood Estates off Maple Avenue in Keene.

Members of the new cooperative for Tanglewood Estates in Keene vote on bylaws Tuesday during a meeting at the Jonathan Daniels Preschool.

Residents of Tanglewood Estates have formed a cooperative association and are considering buying the Keene mobile-home community.

The move was prompted by the owner’s interest in selling the park to a large Michigan company. New Hampshire law requires mobile-home park owners to notify residents before a sale so they can make a purchase offer of their own.

Forming the cooperative is a preliminary step and allows residents to explore a purchase but doesn’t commit them to that, specialists from a nonprofit organization told about 100 Tanglewood residents at a meeting Tuesday night.

“You’re in the fact-gathering phase right now,” Michelle Supry, a cooperative conversion specialist with the N.H. Community Loan Fund’s Resident Owned Communities program, told the crowd in a multi-purpose room at Jonathan Daniels Preschool. “You don’t know if this purchase, or possible purchase, is going to be a fit for your community.”

Sitting on about 100 acres between Court Street and Maple Avenue in northwest Keene, Tanglewood has 328 home sites, according to the park’s website.

The Hynes Group, the Vancouver-based company that owns Tanglewood, notified residents last month of a potential sale, according to a copy of the letter reviewed by The Sentinel.

The letter says The Hynes Group “would like to accept” a purchase offer from RHP Properties, which owns more than 230 mobile-home communities in 24 states worth a combined $3.6 billion, according to its website.

RHP has offered $20 million for Tanglewood, part of a proposed $78 million acquisition of six Hynes Group mobile-home parks in New Hampshire, Maine and South Carolina, according to a summary of the offer distributed to Tanglewood residents.

"We would look forward to getting to know the residents, be(ing) a community partner and to owning Tanglewood for a very long time, similar to our other communities," Joshua Mermell, RHP's senior vice president of acquisitions, said in an emailed statement.

He said the company has 30 years of experience and would provide "stable, dedicated ownership."

Last week, RHP held a meeting with Tanglewood residents about the company’s possible purchase of the park. According to residents, the company said it would limit annual rent increases to $14 per year and promised improvements to the property.

A fee schedule on the Tanglewood website puts monthly rent per lot at $535 in 2018.

At a separate meeting last week, residents voted to form the cooperative, according to Chris Monroe, a housing cooperative specialist with the N.H. Community Loan Fund.

At Tuesday’s meeting, members of 62 Tanglewood households joined the co-op.

Residents at the meeting had a range of opinions on the possibility of co-op ownership.

In interviews, some worried that cooperative ownership would lead to ineffective management, poor upkeep and higher costs for residents. Several cited other mobile home parks that they said deteriorated after becoming co-ops.

At one point during the meeting, resident Barbara Pierce stood up and asked Monroe to guarantee rents wouldn’t rise under co-op ownership. He said he couldn’t guarantee that — rents would be voted on by the members themselves.

“I’m on a fixed income of Social Security,” Pierce later told a Sentinel reporter. She said she’s concerned that expenses related to maintaining the property would cause rents to spike. “Any increase is a hardship.”

But others expressed enthusiasm for the cooperative model. They said it would give residents more control and put their rent money back into the local community.

“The residents are in control of their own destiny,” said Chris Villeneuve, a Tanglewood resident since 2001 who was elected president of the co-op’s interim board of directors Tuesday.

Under cooperative ownership, residents can make sure the park stays affordable and viable in the long term, something corporate ownership does not guarantee, he added.

Some residents were still on the fence. Diane Kelly said she joined the co-op and is skeptical of a “big corporation coming and taking over,” but wants more information before deciding.

If residents move forward, they have until Jan. 18 to submit a purchase and sale agreement, signaling interest in the property, Monroe said. Then, they would have time to study the property and the transaction’s financial impact before voting on whether to close on the sale.

At that point, if a majority of co-op members are unsatisfied with some aspect of the deal — such as its projected impact on rent prices or the condition of the property — they can walk away from it, Monroe said.

According to state law, The Hynes Group must “negotiate in good faith” with residents if they make an offer.

Tanglewood residents can continue to join the co-op and should speak to a board member to do so, Monroe said during the meeting. The fee is $10 per household.

This article has been updated to include a comment from RHP Properties.