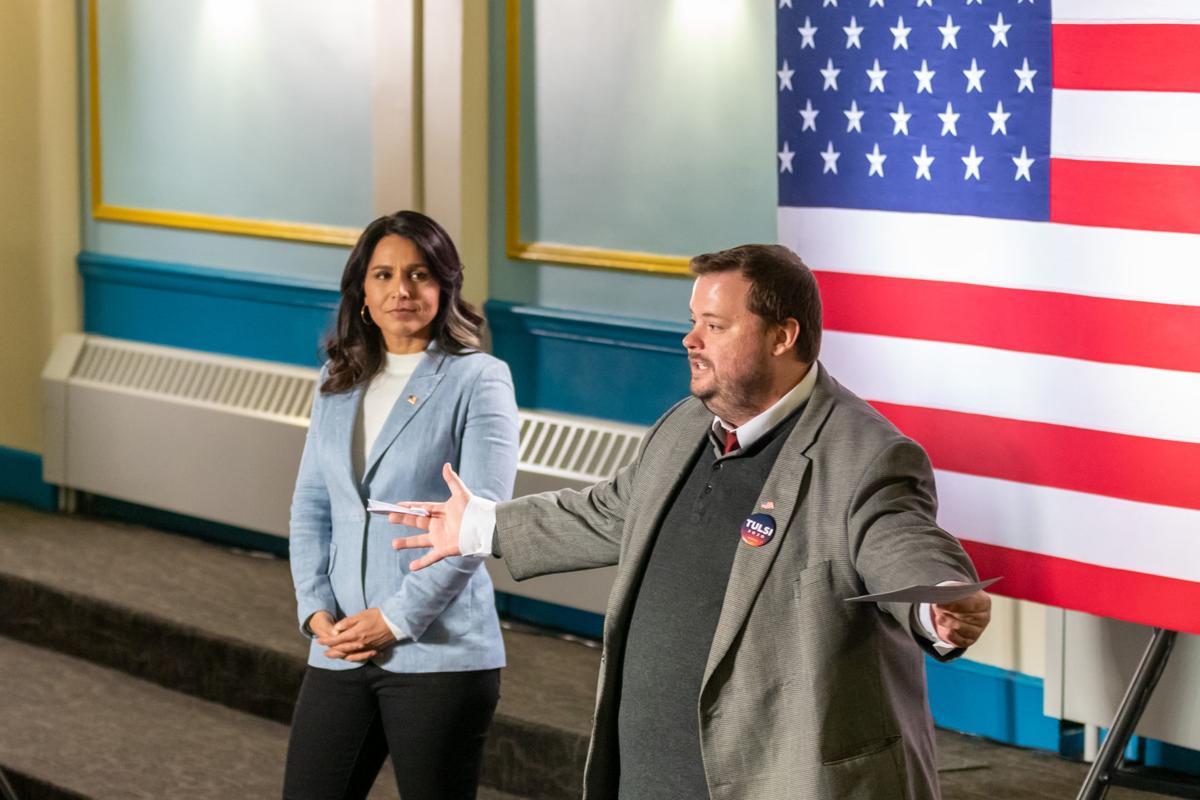 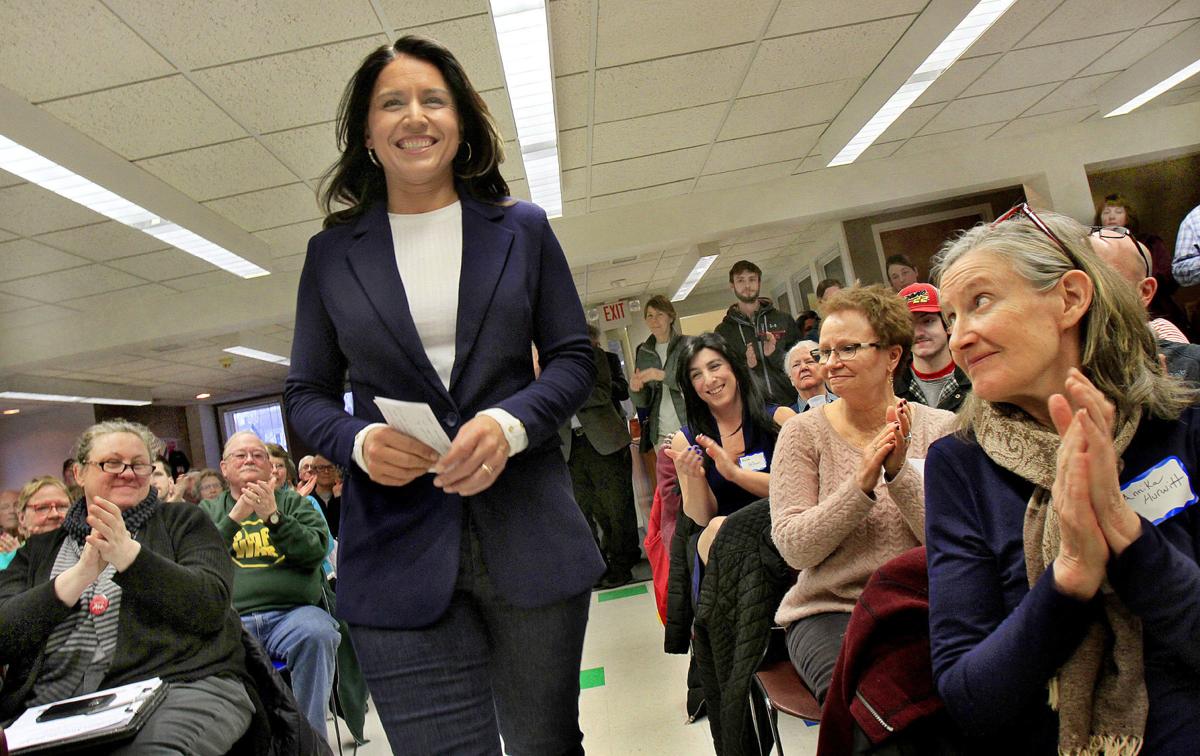 Presidential candidate Tulsi Gabbard, a Hawaii congresswoman, receives applause as she walks to the podium after being introduced at the Jaffrey Public Library last spring.

Presidential candidate Tulsi Gabbard, a Hawaii congresswoman, receives applause as she walks to the podium after being introduced at the Jaffrey Public Library last spring.

Heading into the first-in-the-nation primary on Feb. 11, Democratic presidential candidate Tulsi Gabbard is hoping to pull off a shock upset in New Hampshire, all but abandoning campaigning in Iowa and even renting a house outside Manchester.

And for her ride-or-die supporters, a top-five finish is completely within the realm of possibility.

Despite a relatively low polling average and significantly less media attention than several of her competitors, the Hawaii Congresswoman is betting on the Granite State’s open primary system and penchant for candidates with a maverick streak.

Gabbard, 38, has drawn sizable crowds to her events in the Monadnock Region, and whatever they may lack in attendance compared to the events headlined by Bernie Sanders, Elizabeth Warren and Pete Buttigieg, they make up for in loyalty.

“I said it in Jaffrey the other night: I feel like Tulsi is kind of the JFK of my generation,” said Eric Jackman, 33, of Peterborough.

Outside of his work as an academic adviser at Southern New Hampshire University and his side gig as a professional Donald Trump impersonator, Jackman is a volunteer organizer and self-described “New Hampshire cultural attaché” for the Gabbard campaign.

He was an early supporter of the Iraq War veteran, and has long said he sees Gabbard as the inheritor of an outsider, quasi-libertarian and anti-war legacy left by the likes of Dennis Kucinich, Ron Paul and Mike Gravel — all long-shot presidential candidates who found a fervent following in the Granite State.

Because New Hampshire’s primary allows for independents and even Republicans to vote in the Democratic race without needing to stay registered in the party, Gabbard attracts a distinct base of supporters compared to her 2020 rivals.

At her events, such as one in often politically overlooked Charlestown Wednesday night, many openly say they voted for Trump in 2016, often after backing Sanders in the Democratic primary against Hillary Clinton.

Others say they identify as Republicans, independents or Libertarians who otherwise would never be interested in the Democratic primary race, but are willing to give it a shot this year because of Gabbard and the lack of a consequential contest on the Republican side.

Almost all of them say they share a loathing for Clinton, whom Gabbard sued for $50 million this week for defamation after the former secretary of state implied — without mentioning Gabbard by name — that she could be a “Russian asset.”

“People who support Gabbard — or even your MAGA people [Trump supporters] or your [Andrew] Yang people — they viewed Trump as that outsider who was gonna smash the system and bring it to heel,” Jackman said. “And then they view Gabbard as someone who has a demonstrable record of standing up to the Clintons by resigning her [Democratic National Committee] post in 2016, endorsing Bernie, shedding light on the corruption and meddling that the DNC sought to do [from emails in the WikiLeaks hack] ...”

Clinton’s accusation came on a podcast as Russian bots promoted Gabbard’s candidacy on social media and as Gabbard continued to refuse to call Syrian dictator and Russian ally Bashar al-Assad a war criminal after meeting with him in 2017.

The meeting, brokered by Kucinich, was part of what Gabbard described to The Sentinel’s editorial board Tuesday as part of what a true leader needs to do, arguing that sitting down with a dictator to negotiate peace is better than sending young Americans to war.

At the end of the interview, Gabbard also questioned whether Assad used sarin gas on his own people, expressing skepticism of U.S. intelligence and United Nations reports blaming the Syrian regime.

Sarin gas is a nerve agent that paralyzes the human respiratory system, killing slowly by asphyxiation.

Vince Chevalier, a 30-year-old Gabbard organizer based in Nashua, said he decided to drop everything to volunteer for the campaign when he “turned on Stephen Colbert one night grilling her about Assad and that bullsh-t.

“So then I realized, yeah, she doesn’t take PAC money, she doesn’t get along with the establishment, it’s not gonna be an easy thing,” Chevalier, a dual French-American citizen originally hailing from Strasbourg, continued. “I don’t have a girlfriend. I’m 30. I’m able-bodied. If I don’t get up and volunteer, who else will?”

Chevalier added he finds Gabbard to be following in the footsteps of Paul and Kucinich, which is why she appeals to a segment of current and former Trump supporters.

In Charlestown Wednesday night, Larry Colby of Gilsum and his wife, Marilee Cyr, said they’ve made their minds up to vote for Gabbard after pulling the lever for Trump over Clinton in 2016.

“She’s very calming to me,” Cyr, who identifies as a Democrat, told The Sentinel upon heading out of the town-hall event.

She said she backed Sanders in the 2016 primary, but has been sold by Gabbard’s bipartisan attitude and opposition to “regime-change wars,” a consistent refrain from the candidate on the trail.

Colby said he’s a registered Republican planning on writing in his vote for Gabbard in the GOP primary, after missing Gilsum’s deadline to change his registration for the race.

Gabbard’s anti-war platform registers deeply with him as a Vietnam War veteran, he added, and her stop in Charlestown is also a sign she’s in touch with the working class.

While Colby’s registration mishap may be an unfortunate example, Gabbard’s dependence on non-Democrats in the primary could pose a major problem, according to Andrew Smith, a political science professor and pollster at the University of New Hampshire.

“Which is about 3 percent of the electorate; it’s not that big,” he added. “... It sounds so good though that we recycle it every few [campaigns]. The truth is, no candidate has ever won the New Hampshire Primary without winning the plurality of their party’s registered voters. That is, nobody wins the primary on the backs of independents.”

Smith also doused water on the claim from some Gabbard supporters that she under-performs in polls because of libertarians’ tendency toward privacy or due to an under-sampling of non-Democrats, pointing to a University of Connecticut study finding no correlation between privacy concerns and willingness to pick up the phone to answer a poll.

Gabbard herself is often reluctant to weigh in on the so-called horse-race elements of the campaign, preferring instead to stay on her anti-war message.

She said her appeal to Trump supporters comes from “treating [them] with respect, inviting them to come in,” when asked by a reporter what she understands about those voters that her competitors do not.

“I think that’s a basic thing that I talk about every night, and people feel that and understand that — that because they voted for Trump, they’re not treated as second-class citizens,” Gabbard told The Sentinel after her Charlestown event. “Treat them with the respect that every single one of my fellow Americans deserve, and they feel as though they are the change.

“We all are the change that we need to see in our country.”

Looking for more on the 2020 candidates? Visit our Elections page.