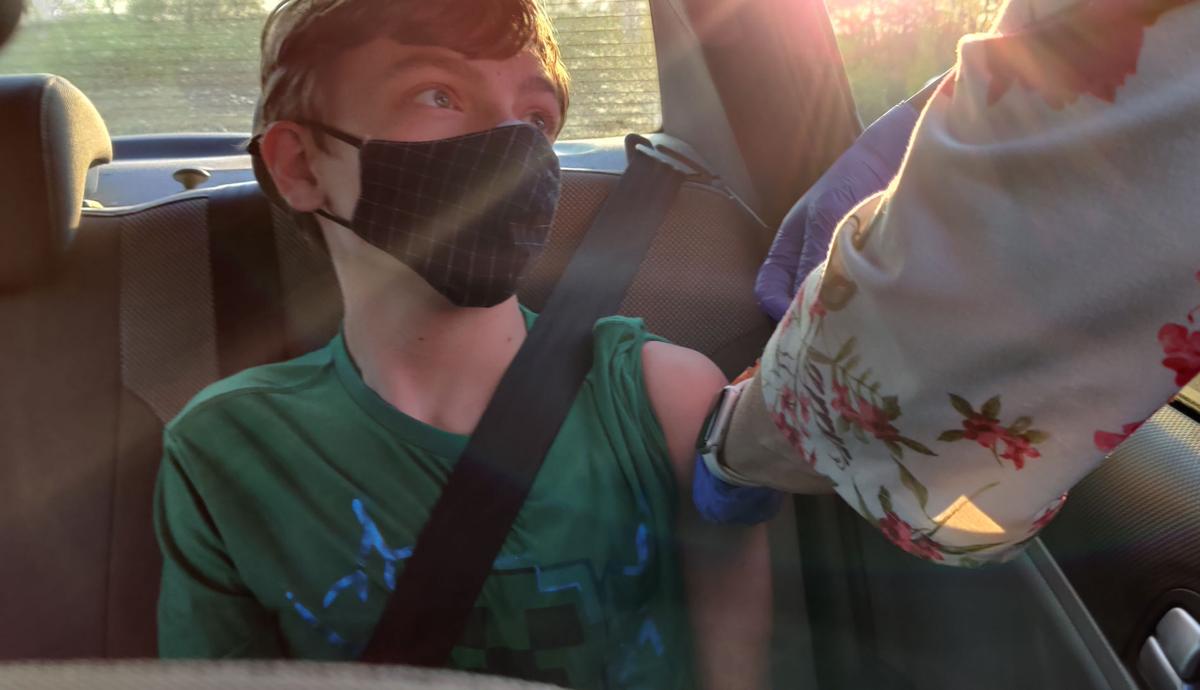 Calvin Williams receives his first vaccine dose on May 15 at the state-run site on Krif Road in Keene. 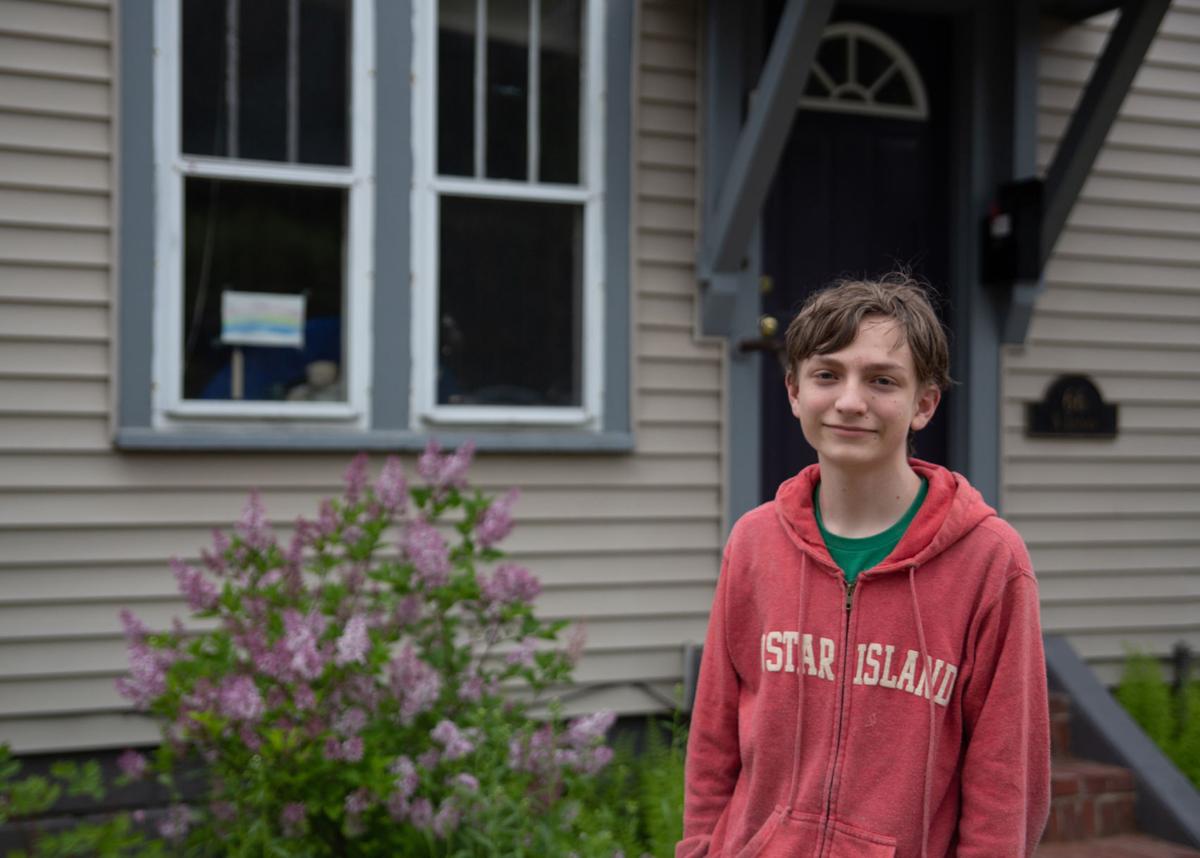 Calvin Williams, 14, outside of his home in Keene on Friday. He received his first dose of the Pfizer-BioNTech COVID-19 vaccine on May 15.

As soon as the Pfizer-BioNTech COVID-19 vaccine was approved for young teenagers, Calvin Williams was asking his dad to book him an appointment.

The 14-year-old from Keene — like several other Monadnock Region adolescents whose parents spoke to The Sentinel — decided for himself whether he’d get vaccinated, rather than leaving the choice to his parents.

“It was always his choice and he’s wanted it for a long time,” his father, City Councilor Bobby Williams, said in an email. “[It’s] been stressful to be a kid living through a pandemic, and he has been very concerned that he, or someone in our family, might get the disease.”

The Food and Drug Administration approved the Pfizer vaccine for those 12 and older May 10. The other two approved vaccines, made by Moderna and Johnson & Johnson, are available only to those 18 and older, though Moderna is seeking clearance from the FDA for people as young as 12.

New Hampshire allowed 12- to 15-year-olds to start making appointments three days later. As of May 25, more than 14,000 state residents who are 15 or younger — representing about 6 percent of that age group — have received their first dose, according to the most recent data from the N.H. Department of Health and Human Services. It’s too early for any of them to have received their second dose, which is supposed to happen 21 days after the first.

Several vaccination clinics have occurred at schools in the Monadnock Region, according to Tricia Zahn, director of the Greater Monadnock Public Health Network, which runs Keene’s vaccination site.

The Jaffrey-Rindge school district, Hinsdale Middle/High School, ConVal Regional High School and South Meadow School in Peterborough, and Great Brook School in Antrim all had first-dose clinics in May, Zahn said, and have clinics for second doses scheduled for June, before the end of the school year. The Fall Mountain school district also held its first clinic last weekend, according to its website.

And at the Keene site on Krif Road — which is moving to Maple Avenue next week — Zahn said the younger crowd has led to an uptick in appointments.

“As soon as the new age groups were added — first for 16 and over, then for 12 and over — we [saw] an increase in appointments,” she said in an email.

Two of those younger patients were Addison and Ainsley Treat of West Chesterfield.

Addison, 17, is fully vaccinated, while Ainsley, 14, has her second dose scheduled for June 5, according to their mother, Amy Treat.

She said she and her husband have been talking to their daughters about the importance of getting vaccinated for a while, so they were prepared once the vaccine became available to them.

“Both of them were thrilled to be able to get the vaccine and hopefully start to get back to normal and to protect themselves and others,” she said in an email. “We felt the same way.”

Morgan Philbrick, 14, of Nelson also advocated for herself to get vaccinated.

Even though she has a fear of needles, her mom, Anna, said she was adamant about getting immunized. Morgan received her first dose on May 15. If she hadn’t wanted to get vaccinated, Anna Philbrick added, she wouldn’t have forced her daughter to do so.

“Of course I would have WANTED her to get it, for her safety,” she said in an email, “but I would have respected her desire to not have the vaccine if that was how she felt.”

Sarah Dunton of Keene, however, believes the vaccine needs to be tested further before getting herself or her kids — who are 14 and 16 — immunized.

“I’m not against the vaccine at all and I understand people who decide to receive the vaccine ... but ultimately I feel it was rushed and not studied enough to give to my children,” she said in an email.

The FDA based its approval for the emergency-use authorizations of all three COVID-19 vaccines — like any other vaccination on the market — on the safety and efficacy findings from several clinical trials. Pfizer is currently seeking full authorization from the FDA.

For others like Calvin Williams, getting vaccinated has “lifted a weight from his shoulders,” according to his dad. That, Bobby Williams said, outweighs any possible side effects or complications.

The most common side effects include swelling or pain at the injection site, fever, headache, tiredness, muscle pains, chills and nausea — all of which typically last 24 to 48 hours after the dose.

“We understand that any risks related to the vaccine are dwarfed by the risks related to catching covid-19,” he said by email. “We also recognize that we have a responsibility toward those around us to make sure that we are not contributing to the spread of a dangerous disease, and know that getting vaccinated is a way to do our part to hasten the end of the pandemic.”