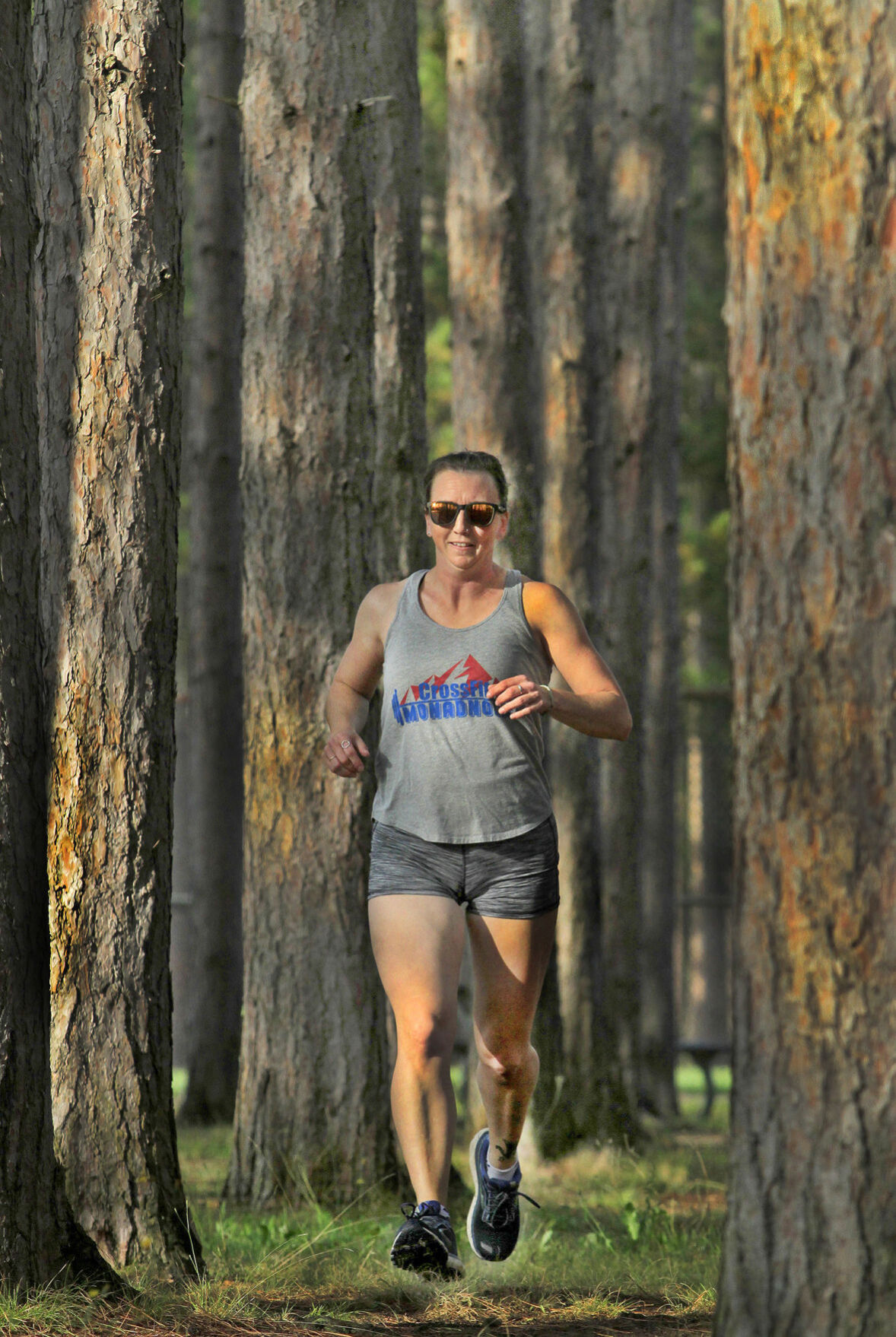 Amy Coey trains among the pines at Wheelock Park on Thursday in preparation for a running a solo marathon, after the Clarence DeMar Marathon was canceled due to COVID-19. 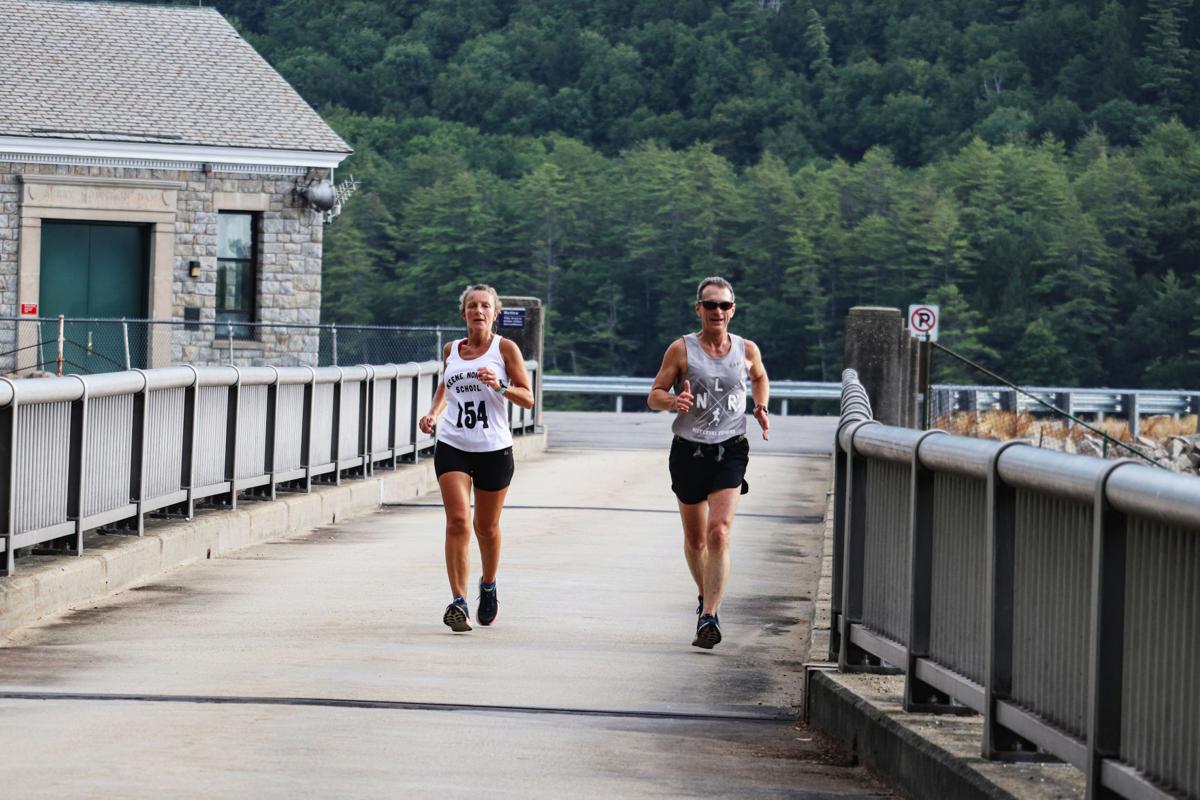 Amy Coey trains among the pines at Wheelock Park on Thursday in preparation for a running a solo marathon, after the Clarence DeMar Marathon was canceled due to COVID-19.

Running a marathon takes sacrifice and discipline. All those miles. All those hours training.

Now imagine if the race you’ve been training for was canceled — poof. Not happening.

That’s the reality many area runners face this year as COVID-19 forced their favorite road races to be made into virtual-only events or canceled altogether. No cheering crowds. No big celebrations at the end. Not this year.

For a subset of those runners — the die-hards, the truly dedicated — their response was simple: I’m running anyway. (Safely and socially distanced, of course.)

That includes runners who planned to do the Boston Marathon and Keene’s Clarence DeMar Marathon in 2020 and are taking things into their own (sanitized) hands to meet their goals this year.

“Let’s bring Boston to Keene,” Thomas Paquette recalls Kristen Leach saying. “Let’s do this up. Let’s make a show out of it.”

So they’re pushing on. The trio of Paquette, coach and owner at Next Level Running; Alan Stroshine, race director for the DeMar Marathon; and Leach, an avid runner who’s artistic director at the N.H. Dance Institute, along with a handful of eager volunteers, will help bring the Boston Marathon to the Elm City on Saturday as a consolation prize for those who qualified for Boston only to see the actual race wiped away.

“I’m hoping to just have a blast,” Kim Cotter, 53, of Chesterfield, said with a laugh. “I’m looking forward to seeing friends in different places along the course. I’ve invited some to squirt me with water guns.”

The “Virtual Boston” course will follow the usual DeMar Marathon route, starting at 7 a.m. in Gilsum and running 26.2 miles to Keene, finishing on Main Street (in lieu of the usual Appian Way finish line on the Keene State College campus). Also running will be Tom Julius, 63, of Gilsum; Karen Jordan, 39, of Keene; Denise Roderick, 52, of Keene; Crystal Morey, 43, of Bellows Falls; and Lucinda Bliss, 55, of Manchester.

The Boston Athletic Association, which organizes the Boston Marathon, originally postponed the race to September, but ultimately decided to convert it to a virtual-only event. Runners must submit their times between Sept. 5 and 14 to receive their T-shirt and medal.

Each runner in the Keene run will get transportation to the Gilsum starting line, bike support with all of their preferred fueling goodies and even the signature sweet rolls that are a fixture of the Boston Marathon finish line, which runners have come to love for a post-race treat.

“We’re going to treat everyone like they’re elite athletes,” said Paquette, a three-time Boston Marathon runner who even designed “Right on Main St., Left on Appian Way” custom T-shirts for the virtual event. “We want to get these little details right. We want to give them that experience.”

The “bring Boston to Keene” crew is truly going the extra mile, so to speak. They’re hanging up poster-board versions of the seven town line signs that runners would normally see on the Boston course (“Entering Framingham,” for example), as well as a miniature Citgo sign for the Marlboro Street/Optical Avenue area.

They’re even having volunteers recreate the Wellesley “Scream Tunnel” — another Boston Marathon staple — on the bike path in Wheelock Park. (Spectators are also welcome to cheer along the route, but are asked to wear masks and socially distance.)

“It is amazing,” said Cotter, who has run five marathons prior to this one. “It validates that whole community spirit even more than you already know.”

Julius, who has trained with Cotter for the better part of two years — first for the Providence Marathon in May 2019, where both recorded Boston qualifying times — said the trio’s “selfless” efforts aren’t surprising.

“It was totally in character for them,” Julius said. “It shows a lot about the way key people in our region contribute to it being a strong running community.”

And all of the extras will come at no cost to the runners, Paquette said.

“We want to do this for the running community,” said Paquette, who has been coaching Cotter, Julius and Morey with his Next Level Running group. “I think that’s what this town needs.”

For runners who planned on tackling the Clarence DeMar Marathon, which is usually held at the end of September, several have chosen to push on as well. Amy Coey of Keene ran the half marathon in 2019 and committed to running her first full marathon this year — pandemic or no pandemic — even if that meant training alone with no carrot of a live event at the end.

“When COVID hit, I knew I needed some sort of structured routine to follow,” said Coey, 39, of Keene, “because that would give me the physical outlet that I needed to help me deal with everything that was going on.”

For Coey, that outlet is usually CrossFit. She works out at CrossFit Monadnock five or six times a week, she said. But when the pandemic forced gyms to close, that escape valve was taken away.

Running gave it back to her.

“I actually felt more inspired when the race was canceled,” Coey said. “Because at that point, I was so far into my training and had some really long runs and really pushed the boundaries of what I’d be able to do before, I knew this one more obstacle — or perceived obstacle — it wasn’t going to be an obstacle for me.”

So, on the originally scheduled weekend of the race — Saturday, Sept. 26, instead of the usual Sunday date — Coey and a handful of her fellow CrossFit Monadnock runners will do their own unofficial Clarence DeMar Marathon and Half Marathon.

While Coey will be the only one running the full marathon, CrossFit Monadnock members McKenzie Leach, Kathleen Grotton, Jim Butler, Brian Lee, Marty Barnard, Alexandrin Zuser, Aaron Cooper, Marissa Clifford-Biederman and Molly Finnigan will be doing the half marathon on the Surry-to-Keene course. Coey will run a combination of area rail trails and segments of the DeMar course, and the routes will finish at the gym on Carpenter Street in Keene.

“I think it’s inspiring,” Michelle Gaffney, owner and coach at CrossFit Monadnock, said of her runners completing their training despite the lack of a big event at the end. “I think it helps build character. It’s saying you’re going to do something and you go do it.”

One thing several runners in both groups (virtual Boston and unofficial DeMar) agreed on was the importance of community in times like this — especially when training for a marathon. Instead of large group training runs, it’s hours and hours by yourself. Instead of high-fives and fist bumps, it’s Strava “Kudos” and comments.

“It’s been invaluable, really,” said Coey, who regularly posted her runs on the gym’s group Facebook page, always receiving a chorus of fire emojis and supportive comments. “It’s really nice to hear from my community and see that support of knowing that I have people that are going to be there.”

So, what do you do when your marathon gets canceled? It turns out, you run anyway.