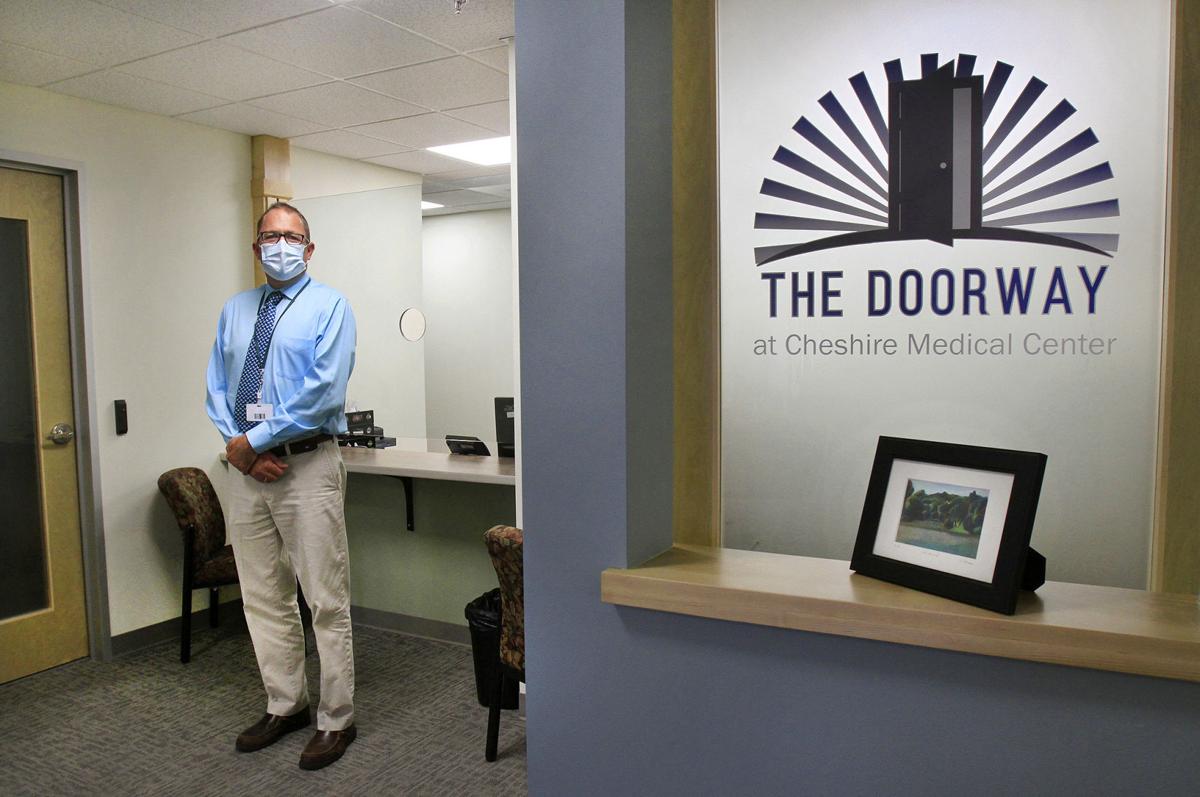 “People isolate, and it just fuels their substance use because they are not having that interaction with others,” Nelson Hayden, the executive director of Keene’s Doorway, said of the pandemic. 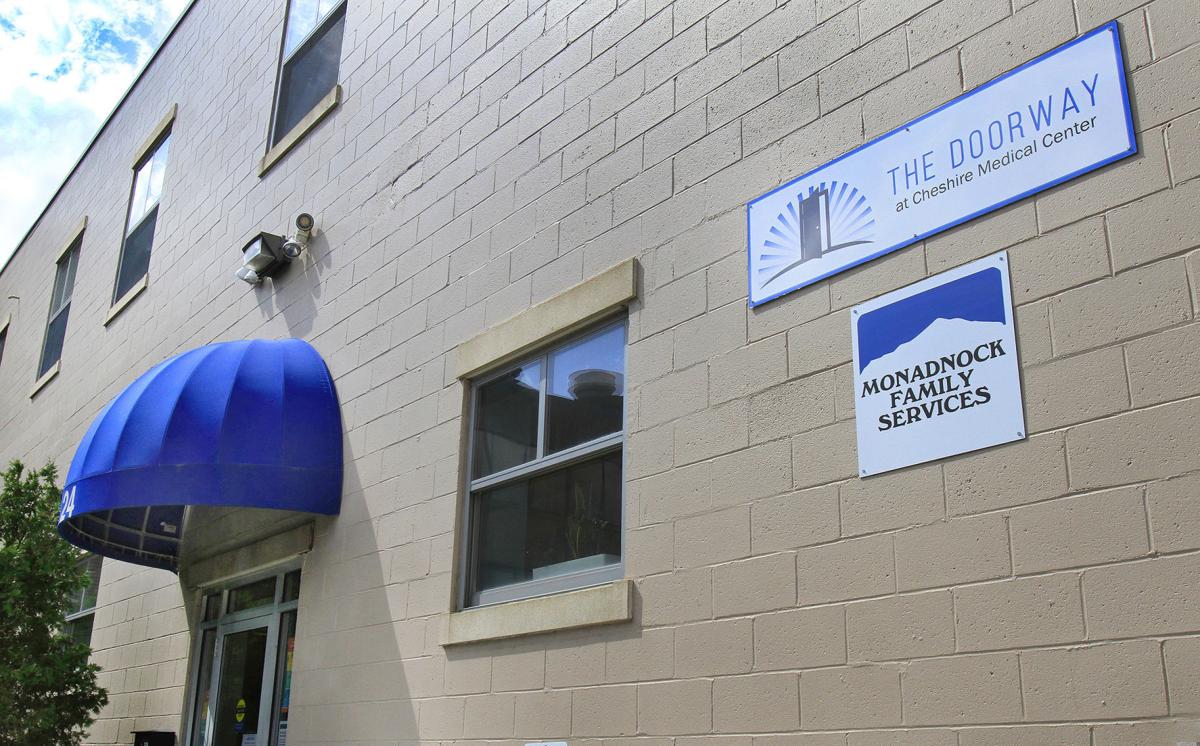 The Doorway, a referral hub for substance-use treatment, is at 24 Railroad St. in downtown Keene. It's shown in this photo last August.

“People isolate, and it just fuels their substance use because they are not having that interaction with others,” Nelson Hayden, the executive director of Keene’s Doorway, said of the pandemic.

The Doorway, a referral hub for substance-use treatment, is at 24 Railroad St. in downtown Keene. It's shown in this photo last August.

In May 2019, two people were seen for alcoholism at The Doorway, a referral hub for substance-use treatment in Keene.

Last month, that number spiked to 25, echoing a national rise in alcohol use amid the COVID-19 pandemic and adding, locally, to the need for detox facilities.

“People have stepped down from being engaged with their whole community,” said Sam Lake, executive director of the Keene Serenity Center. “So they are kind of bored, hanging out, and now maybe someone who had a few drinks after work, they are working from home, and the beer moves from 6 o’clock at night to 9 in the morning.”

A December study by the National Center for Biotechnology Information shows that 60 percent of those surveyed increased their alcohol consumption during the pandemic, with nearly half saying it was because they were under more stress.

Of the 27 percent who said they drank less, 58 percent said it was because of diminished alcohol availability.

“The stress has been amazing for some people,” said Martha Huckins, program coordinator of Monadnock Family Services’ substance abuse department. “They’ve lost their job; if they haven’t lost their job, they are working from home, their kids are running in and out of the room, and they are trying to do school, and your spouse is there too. Life changed, and it changed overnight.”

All of the substance-use treatment providers interviewed by The Sentinel said they’d seen an increase in alcoholism among their clientele during the pandemic, including those relapsing and people experiencing alcohol addiction for the first time.

Among those seen at The Doorway, alcohol has consistently been the second most-used substance since the center opened in 2018, with opioids being the first.

“Our volume has steadily increased throughout the pandemic as people find maladaptive ways to cope with the stress,” Executive Director Nelson Hayden said.

Isolation — commonly called the “enemy of addiction” in the recovery community — is another reason for the increased use, according to Hayden.

“People isolate, and it just fuels their substance use because they are not having that interaction with others,” he said. “We need to have people have connection, and that is one of the things that this pandemic did, was take it away.”

A dearth of detox options

Over time, excessive alcohol use can lead to the development of chronic diseases and other serious ailments, such as high blood pressure, digestive problems, heart disease, stroke and liver disease.

In 2019, about 14.5 million people in the nation had an alcohol-use disorder, according to the latest available data from the National Institute on Alcohol Abuse and Alcoholism.

And for years, New Hampshire has led the country in drinking, with an alcohol consumption per capita of 4.76 gallons annually, data from the World Population Review show.

While this isn’t the first time America has seen an uptick in drinking, the pandemic prevented people from turning to their community for help, with treatment providers having to shut their doors for extended periods of time.

“We’ve had past episodes where there has been an increase in alcohol use, like after 9/11 or [Hurricane] Katrina, but it was a short period of time, and help was available,” Huckins, of Monadnock Family Services, said. “... The concern is [the pandemic] has been going on for so long, this is developing significant patterns.”

And though providers have since reopened, they say there is still a dire need for detox facilities locally and across the state.

If someone with an alcohol problem needs to be admitted to an inpatient program, most facilities require they complete a detox program first, according to Hayden. This is because people withdrawing from alcohol have an increased risk of seizure or death.

“That has been a big bottleneck in the whole system,” he said.

Currently, there are only two alcohol detox facilities in New Hampshire, in Manchester and Effingham. Others are in the works, such as one in Peterborough slated to open by the end of the year.

To help combat this, The Doorway launched a new medication-assisted treatment program specifically for alcohol use this fall.

Similar to its program for opioids, clients take a drug — most commonly librium taper — every day under a physician’s supervision to help them safely detox from alcohol, according to Hayden. The outpatient program is often coupled with counseling or other behavioral therapies.

People with a history of seizures or difficult withdrawals would not do well with the program, he added, and would need to go to an inpatient detox facility.

“We’ve probably done it a few dozen times,” Hayden said of medication-assisted treatment for alcoholism, “and it’s just been able to facilitate access to treatment.”

In addition to more treatment, providers said the stigma surrounding alcoholism is another component that needs work.

Alcoholism is often shrugged off, providers said, partially because people are more familiar with it and have used the legal substance themselves.

“Family members are like, ‘What’s your problem? Stop drinking too much. I can.’ Family members and friends will say that to people struggling with alcohol addiction,” Huckins said.

Hayden added that there is a long history of people covering up their alcohol-use disorders, or loved ones simply ignoring the problem.

“People have just said, ‘OK, we will brush that under the carpet.’ Whereas if you say [you’re using] heroin, it’s like ‘Whoa, wait a second,’ ” Hayden said.

However, Lake said alcohol — as well as benzodiazepines, a tranquilizer — have the highest risk of permanent injury or death when people are detoxing, underlining the need for people to take it seriously.

“People don’t die when they withdraw from opioids, they just feel terrible. With alcoholism, withdrawal can kill you,” he said, “and that’s why we need treatment in that area.”

For help with substance-use disorders, Cheshire County residents can visit The Doorway at 24 Railroad St. in Keene. The Doorway is open Monday through Friday, from 8 a.m. to 5 p.m. Support through the state’s 24/7 hotline is available at 211.