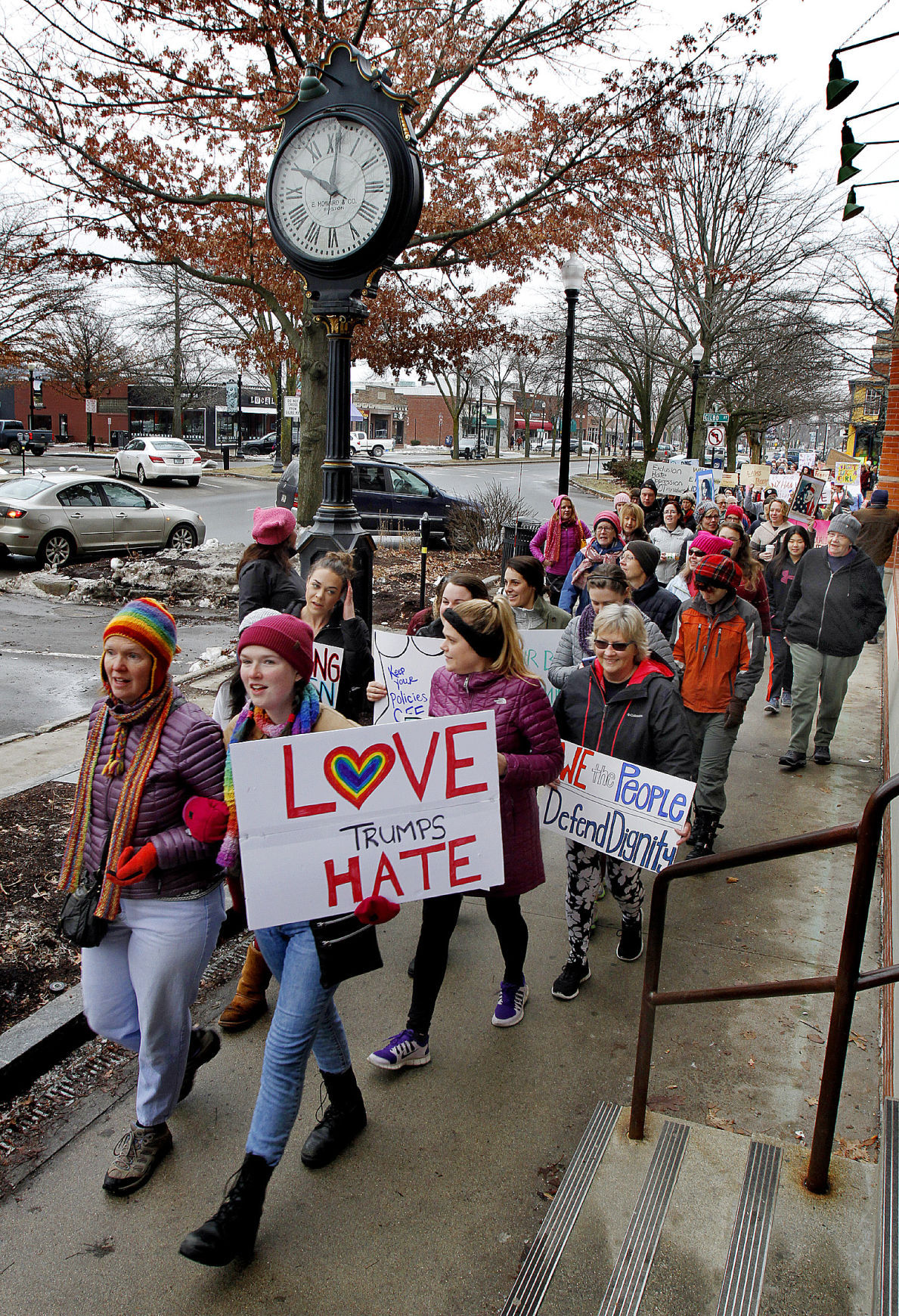 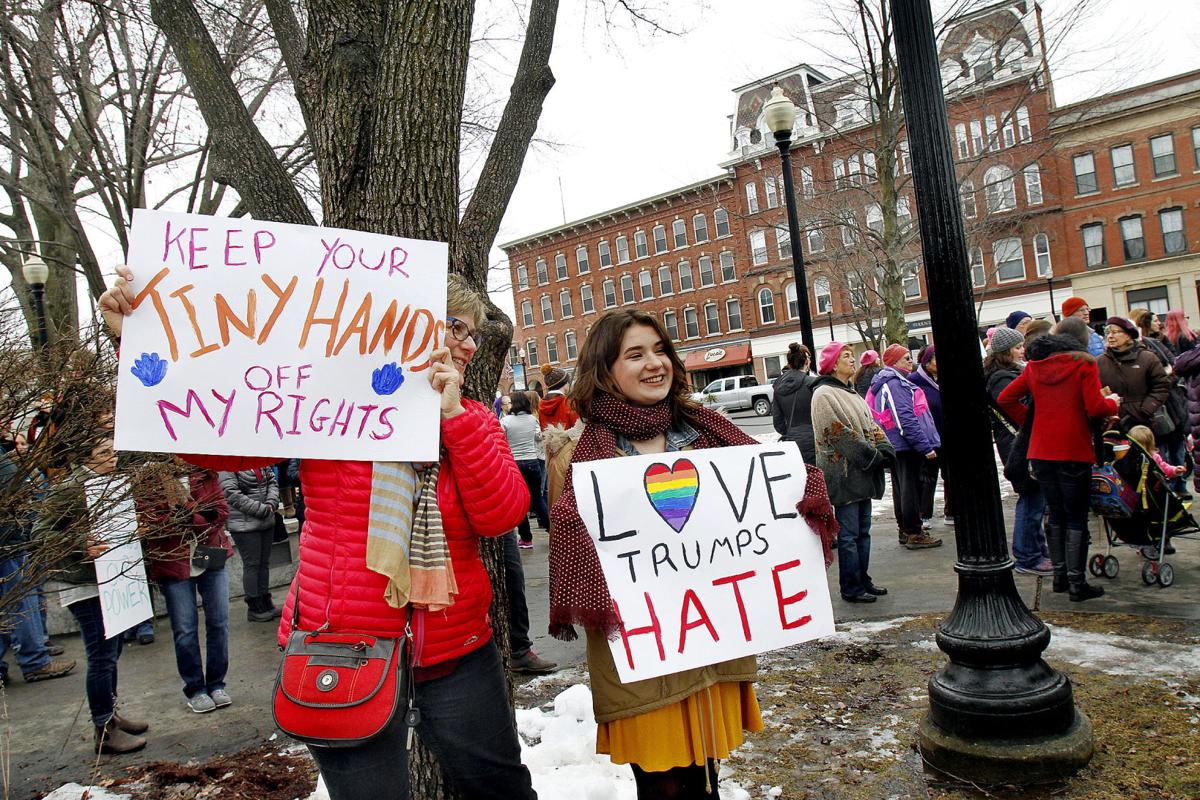 Kristen Beske, left, and her daughter, Cassie Dunn, both of Brattleboro, joined the hundreds gathered on the Central Square common during the Women's March on Keene on Saturday. 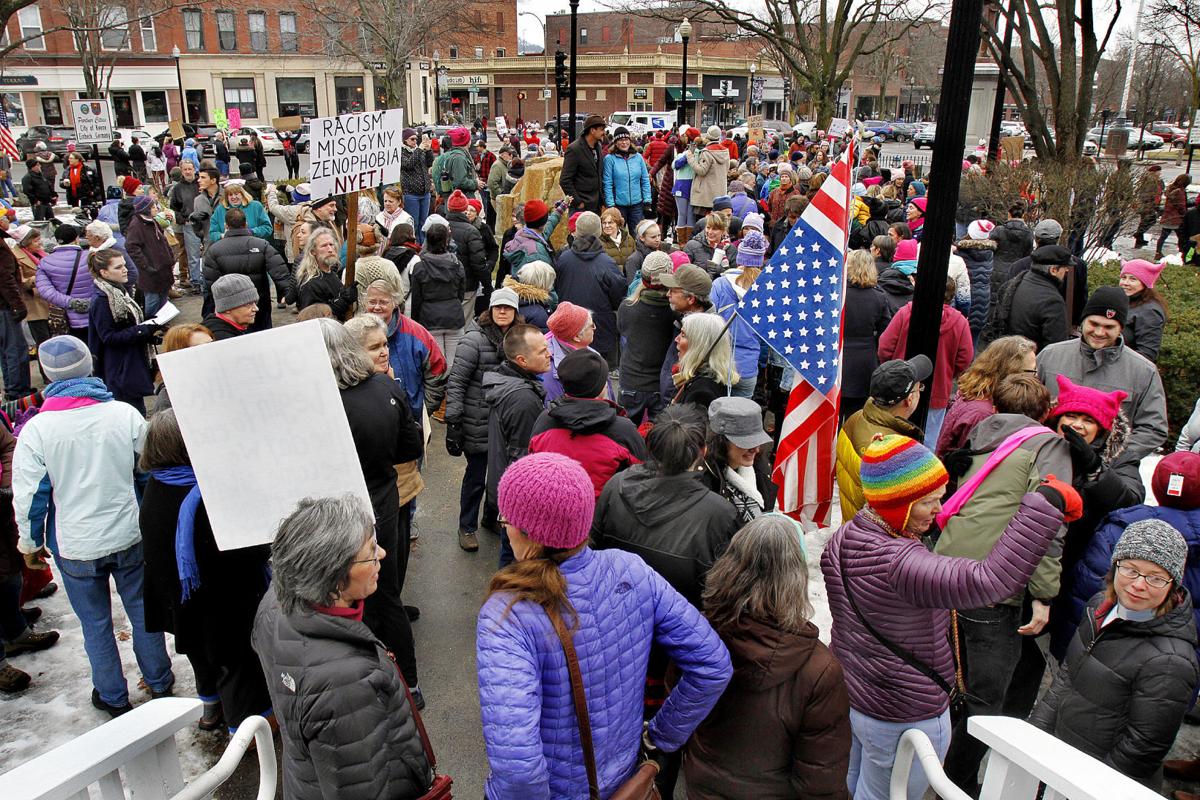 Hundreds participated in the Women's March on Keene on Saturday, gathering on the Central Square common to rally with song and speeches.

Kristen Beske, left, and her daughter, Cassie Dunn, both of Brattleboro, joined the hundreds gathered on the Central Square common during the Women's March on Keene on Saturday.

Hundreds participated in the Women's March on Keene on Saturday, gathering on the Central Square common to rally with song and speeches.

Susan Bosk of Sharon stood with her daughters in the parking lot behind Margaritas Saturday morning, in a crowd of more than 300 people.

The girls, five-year-old Chloe and three-year-old Maya, held signs with pink and purple writing that read “Girls are strong” and “Girls are smart” as the family members prepared to join the crowd in walking to Central Square in the Keene Women’s March. The march was one of nearly 700 held throughout the world on Saturday in response to the inauguration of President Donald Trump.

“For them it’s about having pride in being girls,” Bosk said of her daughters, noting she’s concerned now that President Trump has taken office. She doesn’t want the leader, whom she called “chauvinistic” and “disrespectful to women,” to serve as a role model.

“I’m not thrilled as a mother of two young daughters,” she said. “I want to do something instead of complaining.”

The hundreds of marchers thronged Main Street just after 10 a.m; many held signs and sang “This Little Light of Mine” as they walked. Packing the sidewalks, the marchers started and stopped for about 15 minutes, waiting for the traffic to stop at the intersection Main and West Street before filing into Central Square in large groups.

Waiting on the sidewalk to enter the square, Kate Ross, 66, of Langdon held a sign that read “Rise up. Resist. Speak.” She said that, while it addressed the importance of women’s rights, the event was about much more than that.

She believed the march was a “call” for speaking up against the “rhetoric” she accused President Trump of using against many groups, including immigrants and refugees, during his campaign. Ross said people now need to start speaking out when they are discontent with the government.

“It needs to be that activism becomes a little bit more visible again,” she said.

Yamuna Meleth, 29, and Susan Barnes, 32, both from New York City, came to the march in Keene after visiting Dover, Vt., to celebrate a friend’s birthday. They had wanted to take part in the Women’s March in New York, but because they were away for the weekend, decided to find a march that was close by.

Barnes said the two were marching for the women in the past who allow them to “be who (they) are today.”

Meleth, whose family immigrated to the United States from Kerala, India, 19 years ago, said she disapproves of the policies President Trump has proposed that could target immigrants. She mentioned his plan to build a wall on the Mexican border and his previous suggestions to deport the children of immigrants from the U.S. and establish a registry for Muslims as the ideas she denounces.

“It was important for me not to sit on the sidelines,” she said.

Women’s marches across the country collectively drew hundreds of thousands. A rally and march held in Chicago brought out about 250,000 people according to Chicago Tribune. The New York City mayor’s office said the city saw approximately 400,000 marchers. Police in Los Angeles report the march drew 500,000, according to the Los Angeles Times.

After marchers arrived in the Central Square commons, organizers of the event held a brief rally and people remained in the square until about 2 p.m. Marchers in Keene stood at the circumference of the commons in Central Square holding signs. Cars greeted those in the commons with honking which constantly echoed throughout the square. However, not all passersby were supportive of the demonstrators. One driver in a red pickup truck gave protesters the middle finger at about 11 a.m.

Dianne Eno, 59, of Swanzey stood at the edge of the commons facing City Hall, with a hot pink sign that said “Women’s rights are not up for grabs.”

Like many at the march and rally, she said she disapproved of President Trump’s comments about women and what she sees as his lack of concern over climate change.

“The wrong man is in office,” she said.”We all have to be out here and stand against what is in the White House.”