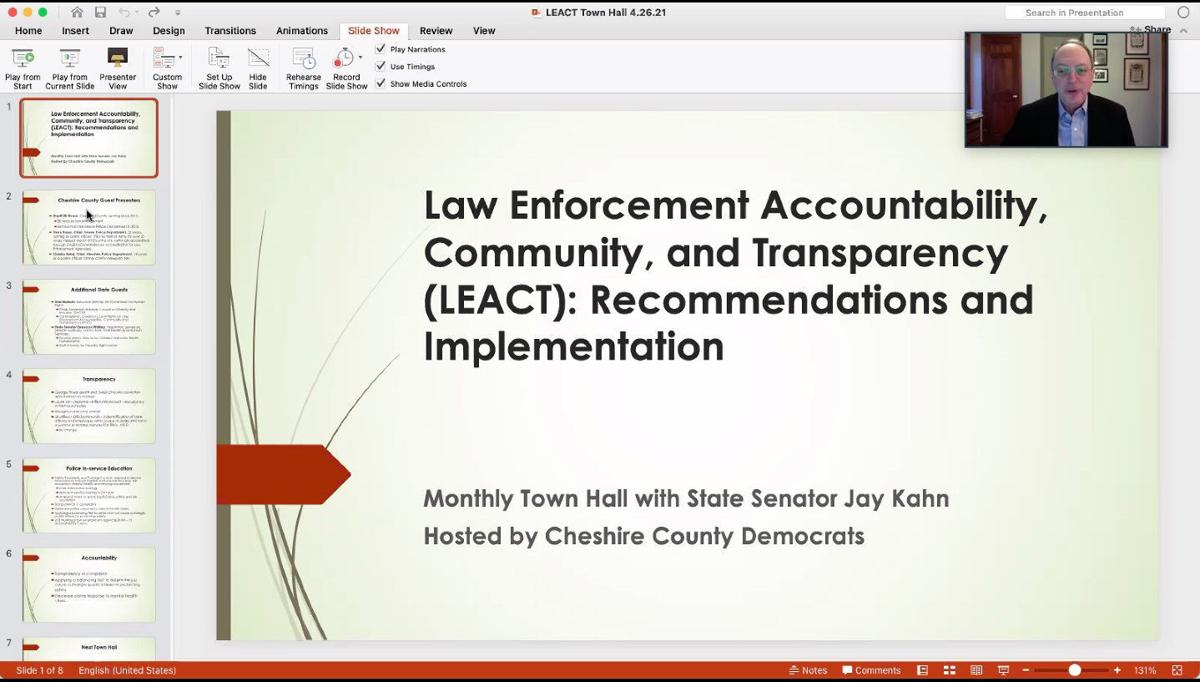 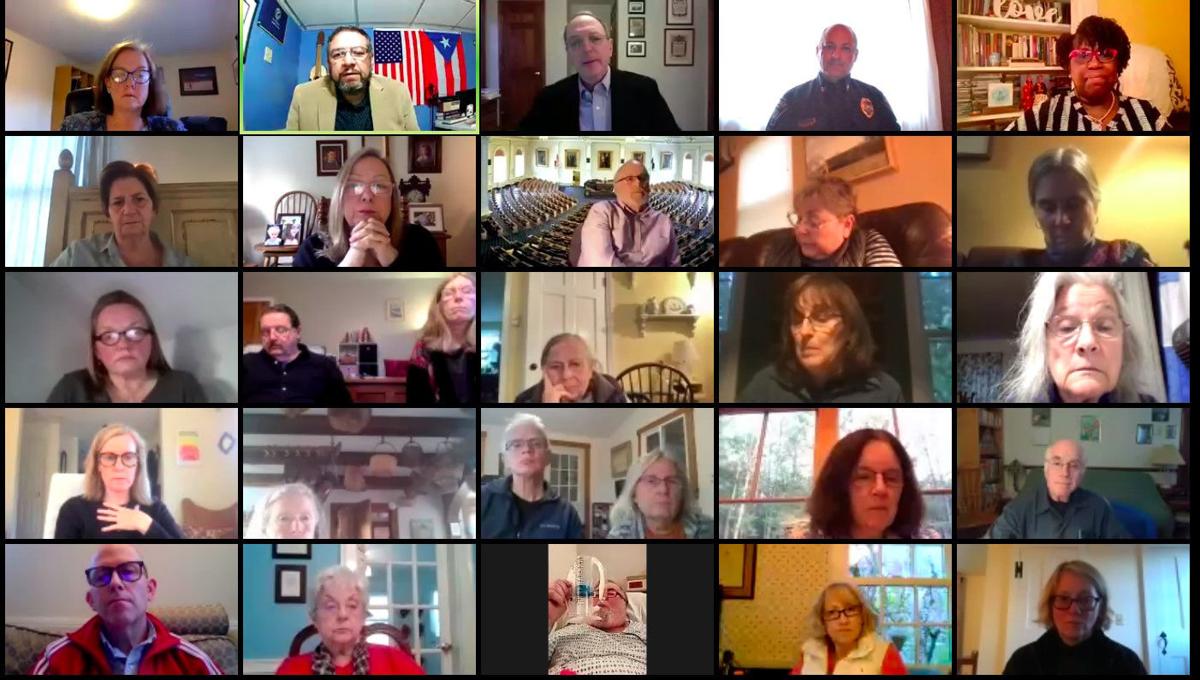 In a broad discussion of potential policing reforms Monday night, elected officials and law enforcement authorities from the Monadnock Region called for greater investment in mental health care while also sparring over issues of police accountability.

State Sen. Jay Kahn, D-Keene, moderated the virtual town hall, which came as New Hampshire lawmakers are drafting the state’s 2022-23 budget and after some have been accused of weakening reforms that a state panel on policing recommended last summer.

The event — organized by the Cheshire County Democrats — focused largely on those recommendations from the Commission on Law Enforcement Accountability, Community and Transparency (LEACT). Gov. Chris Sununu, who convened the commission in mid-June after a Minneapolis police officer murdered George Floyd, endorsed its nearly 50 proposals last September.

Among them, the commission recommended more police training on mental health and substance-use issues, as well as embedding mental health professionals in tactical response teams to reduce the need for police officers to directly handle mental health-related incidents.

Cheshire County Sheriff Eli Rivera praised those proposals Monday, saying that police officers have become a “collect-all” for handling problems like homelessness and mental health. Communities should instead invest in social services to limit police involvement in those situations, according to Rivera.

“History has shown that when you defund any organization … it ends up in the hands of the police,” he said.

Keene Police Chief Steven Russo said his department has been working with Monadnock Family Services, which helps people dealing with mental health issues, for more than a year to find alternatives to a police response in those situations.

Russo said they have struggled to develop solutions, however, and requested that state policymakers offer more support to help police and local organizations respond to mental health crises. Until then, he said, law enforcement officers are often the only available option.

“There are no other resources for us just not to show up,” he said. “… Police show up because there’s no one else to call.”

State Sen. Rebecca Whitley, D-Hopkinton, said Monday that she and other lawmakers are pushing the N.H. Department of Health and Human Services to make crisis response teams available to address mental health emergencies statewide. (Those teams currently exist in Concord, Manchester and Nashua, she said.)

If enacted, those policies would mandate that officers receive 24 hours of in-service training each year — up from the existing eight-hour requirement — including at least two hours on each of the following topics: implicit bias, ethics and de-escalation tactics.

Keene police officers already do more than eight hours of training per year, according to Russo, who said the department wouldn’t need to make any substantial changes to comply with the recommended requirements.

“Any increased level of training is going to lead to hopefully better performance,” he said. “… I don’t see any downside other than the cost to taxpayers.”

Russo called the existing requirement “way too light,” adding that a 24-hour requirement is a “no-brainer.” In addition to training reforms, he said police departments must also reconsider how they recruit officers.

A contentious debate Monday centered on the doctrine of qualified immunity — known as “official immunity” in New Hampshire — which protects public officials from civil liability in some situations.

N.H. Rep. Paul Berch, D-Westmoreland, argued that qualified immunity is “the biggest impediment to reform and accountability and transparency that exists in New Hampshire right now.”

Berch, who authored a bill earlier this year that would have eliminated qualified immunity as a defense in lawsuits against public officials — including police officers — that allege violations of constitutional rights, said that legislation was meant to hold officials accountable. (The N.H. House of Representatives voted narrowly against the bill April 9.)

But Rivera, the Cheshire County sheriff, said qualified immunity does not protect officers who violate people’s constitutional or statutory rights, instead shielding them from mundane complaints like disputed parking tickets.

“If police officers were sued for everyday judgment … there would be an uncounted number of lawsuits,” he said. “Ultimately, what would happen is a crushing amount of debt on small towns and small cities.”

The LEACT Commission, which recommended only policies that its members agreed on unanimously, didn’t endorse any reform on official immunity.

Noting that the commission’s recommendations were unanimous, Whitley criticized Senate Republicans for weakening a measure that would have required police to collect data on the race and ethnicity of people who interact with law enforcement. Proposed legislation would have given Granite Staters an option to add those attributes to their identification, Whitley said, explaining that it would have kept police from guessing a person’s race or ethnicity.

“We really heard from law enforcement that just having that on the license was the easiest way to do this data collection,” she said.

However, Senate Republicans cut the data-collection requirement last month, saying it resembled racial profiling, and instead proposed a committee to study the issue, according to reporting by The Concord Monitor.

That move drew criticism from multiple LEACT Commission members, including Joseph Lascaze, a justice organizer for the ACLU of New Hampshire, and James McKim of the Manchester NAACP.

Another commission member, Ahni Malachi, said during the town hall Monday that she was pleased with the panel’s recommendations. Malachi, who is executive director of the N.H. Human Rights Commission, said more public awareness on policing practices is needed and also called for greater tolerance in debate around those issues.

“If we can have real conversations where we can talk about what our thoughts are in a way that you’re not vilified for them, then I think we can move forward faster,” she said.