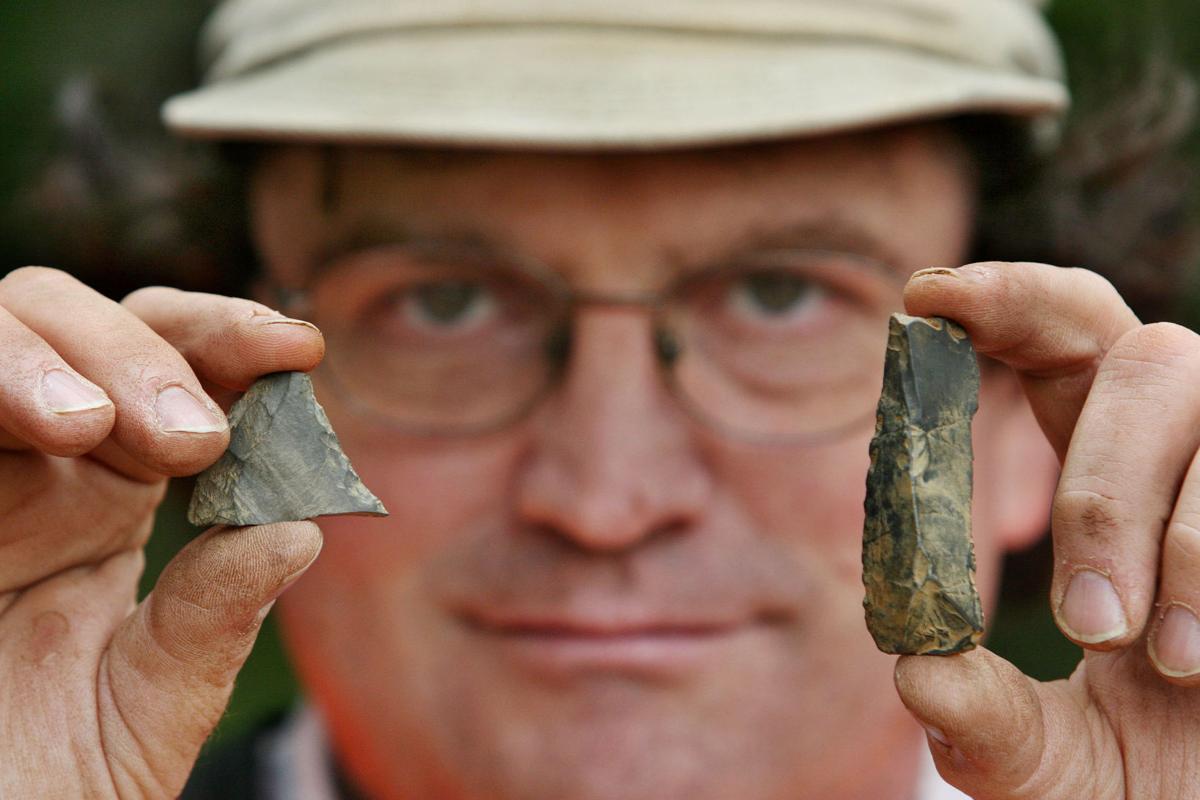 Archaeologist Robert Goodby, of Stoddard, holds a scraping tool, left, and a cutting tool unearthed near where the new Keene Middle School was built, in this file photo from 2010. 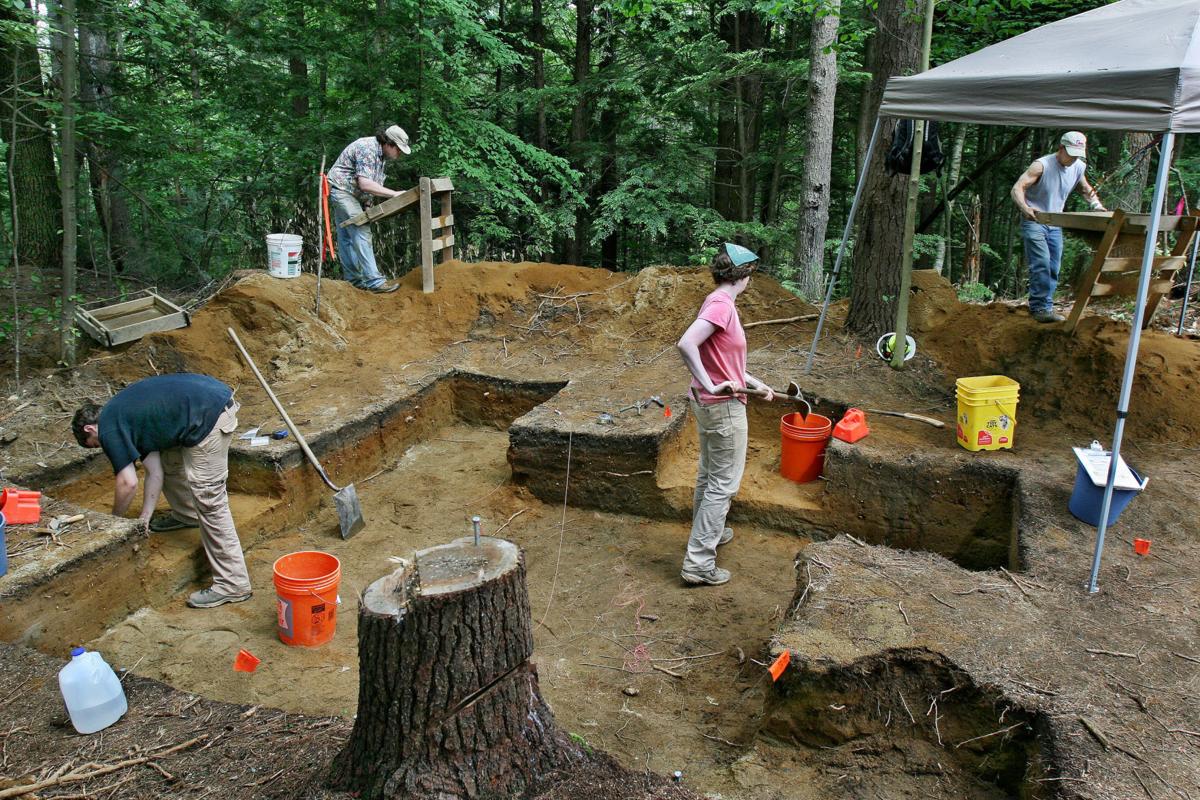 This file photograph from 2010 shows one of the pits dug for an archaeological excavation near the site of the new Keene Middle School. Shoveling out layers of dirt, 5 millimeters at a time, and then sifting the dirt through a screen are from left, Franklin Pierce University senior Cory Atkinson; Robert Goodby of Monadnock Archaeological Consulting, of Stoddard; Gail Golec, project archaeologist and George Leduc, field technician.

Archaeologist Robert Goodby, of Stoddard, holds a scraping tool, left, and a cutting tool unearthed near where the new Keene Middle School was built, in this file photo from 2010.

This file photograph from 2010 shows one of the pits dug for an archaeological excavation near the site of the new Keene Middle School. Shoveling out layers of dirt, 5 millimeters at a time, and then sifting the dirt through a screen are from left, Franklin Pierce University senior Cory Atkinson; Robert Goodby of Monadnock Archaeological Consulting, of Stoddard; Gail Golec, project archaeologist and George Leduc, field technician.

Robert Goodby’s “Eureka” moment began one day in 2010 when he walked out upon a spit of land abutting what’s called Tenant Swamp in West Keene.

Little could he have known then that it would change his life’s work and rewrite the history of New England in a dramatic way.

There, a few feet down into the sandy soil of what now rims the southern edge of the new Keene Middle School’s athletic field, Goodby was to find the oldest evidence of human habitation in Northern New England and one of the most significant archaeological finds in the northeastern United States.

What he found there was a settlement of four ancient homes dating to between 12,570 and 12,660 years ago, proof that humans were living here thousands of years before conventional wisdom previously held and placing it on a list of the oldest prehistoric communities to be found in the United States. Putting this in timeline perspective, these dates were only a few thousand years after mile-high ice sat atop New England in the Great Ice Age.

Now, six years later, Goody beams when he talks about the amazing find.

“It’s the best, most significant, most interesting site I’ve worked on” in a 32-year archaeological career, he said. He’s already compiled a 400-page report describing what he found there, and his work continues in analyzing the results of the excavation.

“I will probably spend the rest of my career studying what was found there,” he said this past weekend, not a mile away from the ancient settlement. Goodby spoke at a presentation at Congregation Ahavas Achim in West Keene, sponsored by a grant from New Hampshire Humanities, a private organization that provides free education programs to the public.

Goodby, an associate professor of anthropology at Franklin Pierce University in Rindge, was called in 2010 by an engineering firm working on plans for the new Keene Middle School off Maple Avenue. He was tasked with conducting an inspection of the land for possible archaeological potential prior to groundbreaking. It is a routine protocol frequently done before large construction projects under the auspices of the federal National Historic Preservation Act.

In most cases, the inspections are pretty much quick, “down and dirty” operations, he said — a few test holes dug and, if nothing significant is found, that’s it. In this case though, the test holes uncovered evidence of stone tools and charred animal bones, smoking-gun evidence of habitation.

He was told to “dig fast” by Keene School District leaders who were eager to go ahead with the construction of the new facility, he recalled.

That he did, with a team of four other professional researchers and students. What they uncovered during a seven-week operation was a treasure trove of more than 200 stone tools and scores of bits of charred bones from caribou and deer. The tools are termed “scrapers,” used for cutting and scraping skins, cutting and shaping wood and several other tasks.

Goodby said the site possessed attributes that would have made it attractive to settlers of the period: good sandy soil for drainage, nearby water and a relatively level field.

The most significant result from the bountiful find, though, is that there were so many relics that it enabled Goodby to place all of them within a matrix based on exactly where they were found. That allowed researchers to put together computer imaging that showed specific patterns which in turn provided evidence of how the groups worked and lived. For example, evidence showed that the residents slept and worked in a ring around the interior of the structures, with cooking and work done in the middle. Goodby also speculates that it was a winter settlement and that the people worked inside the structures most of the time during the severe weather, with men and women sharing tasks in preparing food, creating garments and so forth. The climate at the time was harsh, a cold period that followed the long warm eon that melted the gargantuan glaciers a few thousand years earlier.

The Keene site ranks very well with some of the oldest remains found in North America. According to a May 2016 article in Popular Mechanics, a team of archaeologists in Florida has found stone knives and bones that radio-carbon dating has shown to be at least 14,550 years old, a full 1,500 years before many scientists recently believed humans first populated North America. For many years, archaeologists had believed that the 13,000-year-old stone spearheads and other remains found in the 1920s in Clovis, N.M., represented the first wave of human settlers in North America.

There are many other fascinating findings from the Keene site, which officially is named 27CHI187. None of the tools found are made from stone native to Southern New Hampshire. Four percent of the tools found at the site come from stones 110 miles away in Jefferson; 50 percent from Mount Jasper Quarry in Berlin, 120 miles away; and the remainder from a site in central Maine, 350 miles away. This indicates trading among families and groups within a very large geographical area, Goodby said.

Another interesting finding is the almost complete lack of hunting “points” found at the site. Except for two small broken bits of a spear point that were found, those were almost entirely missing, Goodby said.