You are the owner of this article.
Edit Article Add New Article
You have permission to edit this article.
Edit
Home
News
Sports
Opinion
Events/tickets
Obituaries
Hub
Publications
Classifieds
Jobs
E-edition
1 of 6 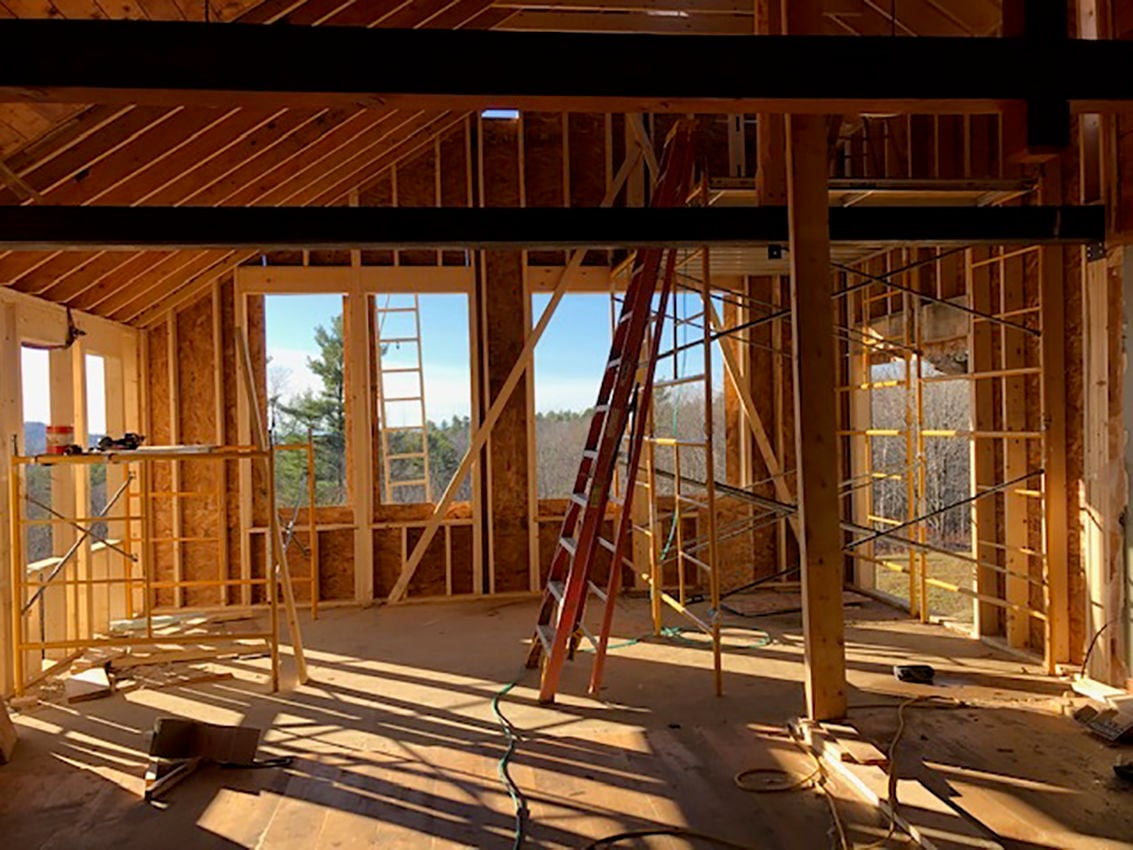 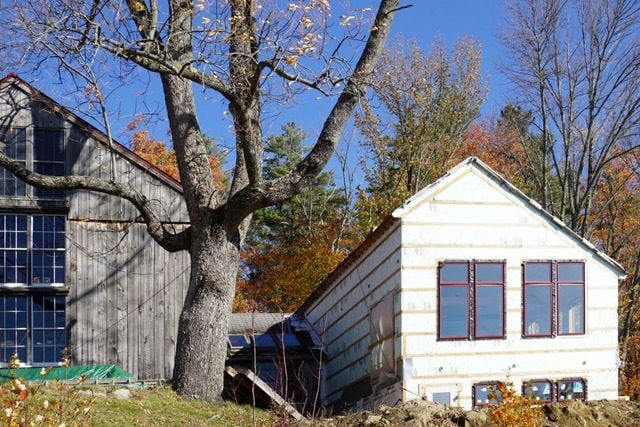 Construction is underway to expand an existing rehearsal space at the Apple Hill Center for Chamber Music in Nelson. 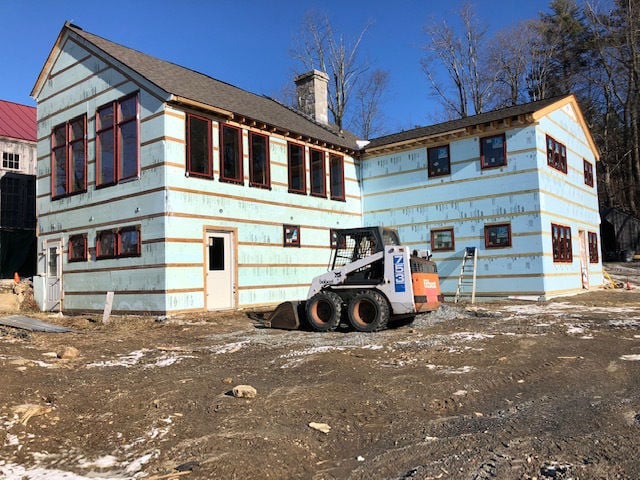 Exterior construction on rehearsal space at the Apple Hill Center for Chamber Music in Nelson is pictured last month. 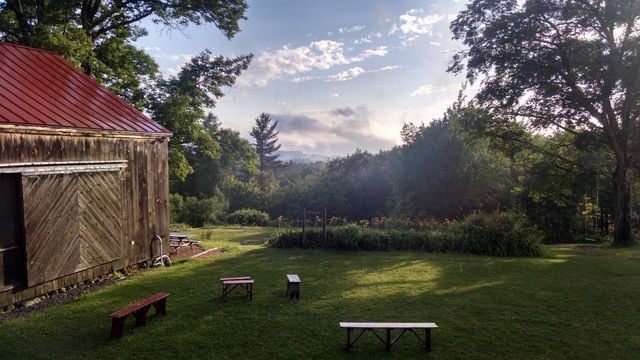 The Apple Hill Center for Chamber Music in Nelson is pictured on a summer night. 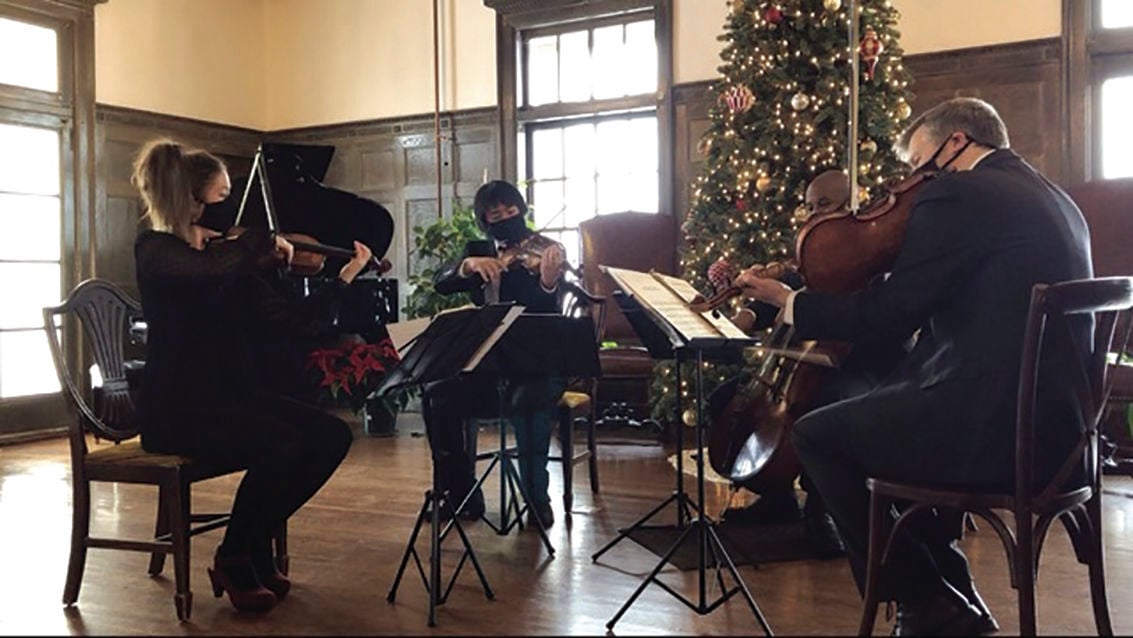 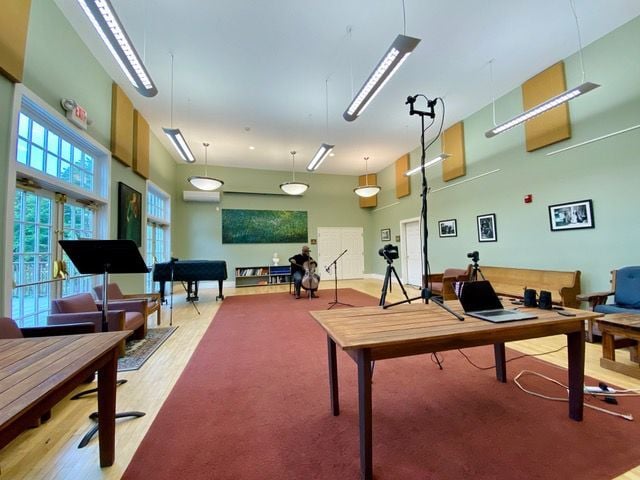 The Hoffman Community Auditorium at the Apple Hill Center for Chamber Music in Nelson, constructed during an ongoing modernization project, includes a recording studio.

Construction is underway to expand an existing rehearsal space at the Apple Hill Center for Chamber Music in Nelson.

Exterior construction on rehearsal space at the Apple Hill Center for Chamber Music in Nelson is pictured last month.

The Apple Hill Center for Chamber Music in Nelson is pictured on a summer night.

The Hoffman Community Auditorium at the Apple Hill Center for Chamber Music in Nelson, constructed during an ongoing modernization project, includes a recording studio.

NELSON — Things are far from routine for the Apple Hill Center for Chamber Music as it enters its sixth decade in Nelson, amid a public health emergency that interrupted its usual programming and slashed its revenue.

But the organization — which is home to the Apple Hill String Quartet and typically hosts several hundred students at its 100-acre campus each summer — has moved some of its offerings online and is proceeding with a years-long effort to revitalize its facilities, according to Director Leonard Matczynski.

Matczynski, who joined Apple Hill as an instructor in the 1980s, said construction on the site has resumed after a temporary pause.

Efforts to modernize the organization’s facilities began in 2010, he said, nearly 40 years after it relocated from Hinsdale to its current location on Apple Hill Road. In the past decade, Apple Hill has built the 60-seat Hoffman Community Auditorium, which can be heated year-round, and has refurbished most of its 24 residential cabins.

“Every building that we’ve renovated or constructed has been really necessary,” Matczynski said. “It’s sort of re-energized everything about Apple Hill.”

But construction stopped last spring, when he realized Apple Hill would likely have to cancel its residential summer music workshop, which attracts approximately 300 students each year, due to the pandemic.

Without tuition from that program and expecting also to lose ticket sales from recitals by the quartet and other Apple Hill performers, Matczynski anticipated a 45 percent drop in revenue for the year. He paused construction, hoping to deflect the financial issues toward that project rather than letting them affect the organization’s nine employees. (All nine have remained with Apple Hill, according to Matczynski.)

“That just didn’t seem ethical to me,” he said. “So we just put it on hold while we figured out what we were going to do.”

Without substantial programming expenses last year, Apple Hill cut its operating budget by about one-third, according to Matczynski. He explained that it has recouped the remaining lost revenue from private fundraising and government programs, receiving nearly $20,000 from the federal CARES Act, via the state’s Nonprofit Emergency Relief Fund.

The current work, which he said focuses on the heart of campus, includes expanding its kitchen and a rehearsal studio, adding three new practice rooms and installing new utilities equipment. He expects those projects to be completed in June 2021 and that subsequent phases will continue through at least 2025.

Mike Kelley, the quartet’s violist who has been involved with Apple Hill since he was a student there in 1986, said he hopes the larger facilities will help Apple Hill resume in-person instruction later this year.

“Those big spaces are going to be really important if we want to have groups next summer that can [rehearse while] distancing,” he said.

In the meantime, like many performing arts organizations, Apple Hill has adapted to remote programming. The Nelson nonprofit held three week-long educational sessions by prerecorded videoconference last summer, each curated by a different member of the quartet, who also serve as musical directors.

And the quartet — Kelley, violinists Elise Kuder and Jesse MacDonald, and cellist Rupert Thompson — recorded eight recitals that were posted on the nonprofit’s social media platforms last year. Those events gave Apple Hill students more opportunities to hear the group than they would during a typical summer, according to Kelley.

“We’re really used to being up close and personal with the audience,” he said. “… It was rough to not be able to do that, but I think there’s always silver linings.”

The organization has also developed plans to celebrate its 50th anniversary remotely, with at least one concert by the quartet and Apple Hill alumni each month, in addition to other programming, including a photo retrospective of its history.

Another silver lining of the pandemic: Matczynski, who became director in 2008 and announced last February that he would step down from the role in March 2021, delayed his departure to help guide Apple Hill through the upheaval. He plans to step down in March 2022, when he hopes to travel “somewhere far, far away” like Scotland or Provence, France.

“The way our organization handled the pandemic, with so much love and so much care … is indicative of the whole 50-year experience,” he said. “I think for a nonprofit to weather 50 years is pretty amazing.”