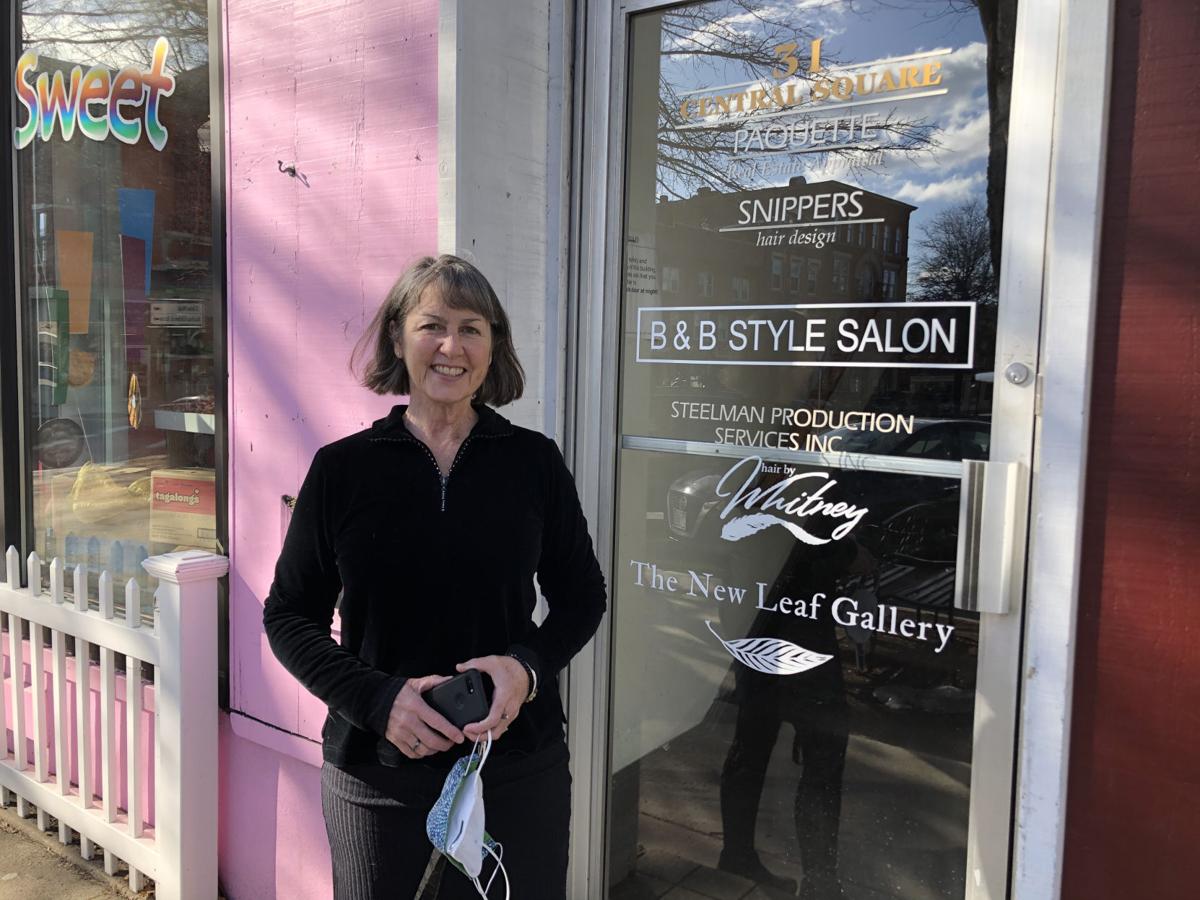 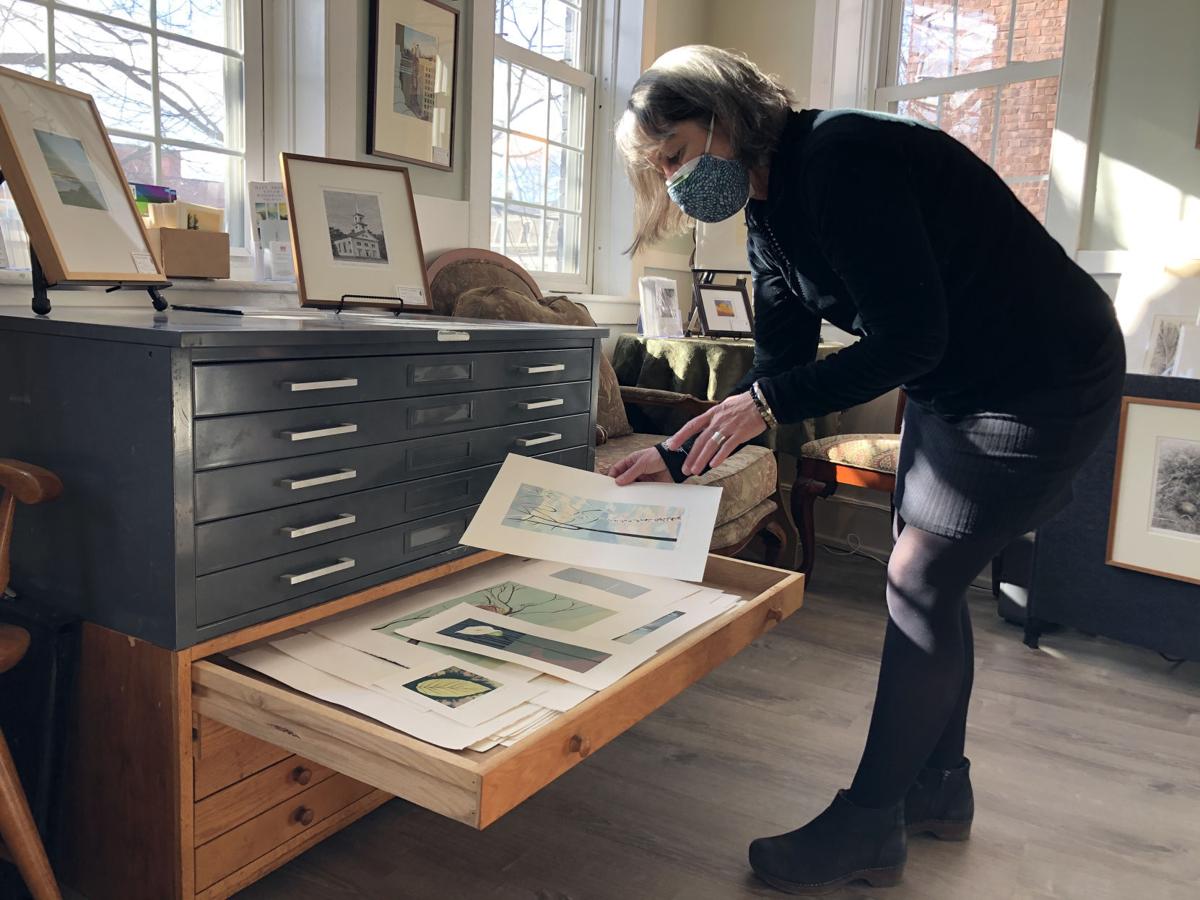 Taryn Fisher, gallery director at The New Leaf Gallery, gestures toward a print available for purchase from the downtown Keene business.

Taryn Fisher, gallery director at The New Leaf Gallery, gestures toward a print available for purchase from the downtown Keene business.

Taryn Fisher’s eyes brighten when asked to talk about two prints in her small Central Square art gallery that depict a coastal scene.

The small prints, from the same series, are practically identical.

But Fisher, 60, points out the subtle differences in the blue and purple landscapes, how the hills fade into the sky in one and pop against it in the other. One might look better with a certain frame or wall color, she explains.

That kind of personalized service is the focus at The New Leaf Gallery, even though the Keene business, which opened in November with Fisher as its director, operates primarily online.

“We’re the antithesis of Amazon,” she said in an interview. “This isn’t about a shopping cart.”

Fisher’s path to running an art gallery, winding across the Northeast, was anything but traditional. There was no “master plan,” she admitted.

Born in suburban Massachusetts, Fisher spent most of her childhood — a time marked by family challenges, she said — in Somers, Conn. She graduated from Southern Connecticut State University in 1982 with a journalism degree and then got on a bus to New York City, where she spent the next decade.

In New York, Fisher earned a Master of Fine Arts in creative writing from Brooklyn College, before working on Wall Street for several years.

She moved back to Massachusetts in the mid-1990s to pursue a business degree from Babson College in Wellesley, Mass. While at Babson, Fisher said, a friend told her about an open position at the shaving products manufacturer Gillette.

She got the job, which led to other roles in supply-chain management and consumer services at large firms like Gillette’s parent company, Procter & Gamble, and Fidelity Investments.

But Fisher soured on the corporate world while administering a $100 million annual budget for Gillette that went toward purchasing single-use plastics. The experience inspired her “sustainability journey,” she said, and a particular interest in sustainable business practices.

Fisher went back to school, earning a doctorate degree with a focus on sustainability and entrepreneurial leadership from Franklin Pierce University in 2013.

That fall, she joined the faculty at Antioch University New England as director of the school’s MBA in sustainability program. Fisher stayed in that role for five years, teaching young professionals about existing sustainable strategies and encouraging them to develop new ones.

“It really felt like a nice encore career,” she said. “I was doing work that felt important.”

The MBA program ended in 2018 due to low enrollment, however — an outcome she said the Antioch administration had warned earlier was likely.

Having moved to Keene in 2016, Fisher said she wanted to stay in the community because she likes its rural character, access to large cities like Boston, New York and Montreal, and progressive politics. She decided to “put my money where my mouth is” and start a business of her own, she said, settling on a gallery because of her love for the arts.

But an initial attempt — a gallery that operated solely online, with no brick-and-mortar store — flopped.

“I significantly underestimated what it would take to launch a brand-new brand in a sector where credibility and reputation is critically important,” Fisher said. “I thought an online venture would be a very nimble way to operate, but I was ahead of my time in terms of an e-commerce business in the arts sector.”

Not to be deterred, Fisher took over a Central Square storefront that had been vacant for nearly three years and launched Keene Fine Craft Gallery in June 2019.

The gallery was one of nine in the state associated with the League of N.H. Craftsmen, a Concord nonprofit that aims to support Granite State artists, which meant it could sell pieces made by juried League members only. That arrangement worked well, Fisher explained, because it ensured that her merchandise — which included ceramics, jewelry, glassware and furniture — was high-quality and carefully curated.

Keene Fine Craft Gallery proved popular, grossing more than $100,000 over its first seven months, capped by particularly strong sales during the holiday season. The business was rolling: Fisher joined the Greater Keene Chamber of Commerce, placed her first advertisements and had put away enough cash to endure the winter months, a notoriously slow time for art galleries.

“For a startup with no [previous] advertising, I felt super pleased with that,” she said.

Fisher said she realized quickly that the pandemic and public health protocols would devastate her gallery. Since the business was new and had very low payroll numbers, she said, it did not meet the criteria for federal relief programs. Instead, the only aid that Keene Fine Craft Gallery received was a $2,500 grant from the Keene nonprofit Hannah Grimes Center for Entrepreneurship.

Facing rent obligations and a lack of income, the gallery closed last April. Fisher said she met with many of the 150 artists whose crafts the gallery featured to thank them for their work and express hope for one day collaborating again.

The decision to close drained her emotionally, since it meant abandoning her own livelihood and those of all her artists, and financially: Fisher lost $40,000 she had invested in the gallery, and had not yet repaid $10,000 on a loan from the Monadnock Economic Development Corp. (She settled the MEDC obligation after raising enough cash in just six days of a community fundraiser last June.)

Then came another challenge in July, when Fisher suffered a bout of Bell’s palsy, a nerve failure that temporarily paralyzed half of her face. She went to the hospital but told staff that she couldn’t afford a CT scan and might lose her house if faced with high medical bills. Concerned that Fisher was having a stroke, however, doctors ordered a CT scan and electrocardiogram, or EKG, test.

“It was a really dark period,” she said.

Fisher recovered, kept her house and began talking to Lyme artist Matt Brown, whom she met two years ago at a League of N.H. Craftsmen event, about opening a gallery suited for the pandemic, with rent costs often too high to maintain a sprawling store.

“With COVID, the old brick-and-mortar model is obsolete,” she told Brown. “I think we need to flip the model. I think we need to go 100-percent online as the central operating backbone, and then anything we do in-person is complementary to that.”

Prompted by that vision, the duo opened The New Leaf Gallery in late November. The business, which sells only original prints, has a small, second-story room at 31 Central Square but mainly operates online: All of the artwork can be found at www.thenewleafgallery.com, and Fisher maintains its active social media presence. Many of the artists are from northern New England, including some, like Brown, who are juried League members — though the gallery is not associated with the organization.

The idea is to pay as little as possible in upkeep costs while still retaining a community presence, Fisher explained.

Whereas monthly operating expenses, including rent and utilities, totaled more than $3,500 at Keene Fine Craft Gallery, she said, the new location — which is primarily a place to keep prints — costs $350 per month. The Central Square space is largely open by appointment only, though Fisher puts a sandwich board on the sidewalk when it is available for drop-ins.

Despite the turn from traditional retail shopping, she said The New Leaf Gallery values personal interactions with customers. There is no “shopping cart” feature on the gallery’s website; anyone interested in buying a print must call, which usually involves scheduling a time to visit the gallery or a videoconference with Fisher to review the available artwork and how it may fit their home or office.

“It is very much an individualized experience,” she said. “I do believe that’s resonating with people. People are tired of buying toilet paper rolls in bulk and having them shipped.”

The online-oriented model has expanded the gallery’s impact beyond the Monadnock Region, which Fisher said can cultivate a “community of printmakers and print-appreciators.” That includes hosting Zoom events with non-local guests, including one Sunday evening that will feature presentations from two New York City artists. (Attendance information is available on the gallery’s website.)

She recognizes that as the digital world dismantles borders, it can also damage human connection. But Fisher is leaning into the adversity and grace in her own past, in a belief that The New Leaf Gallery represents a future that is more sustainable, emotionally.

At a glance: Taryn Fisher