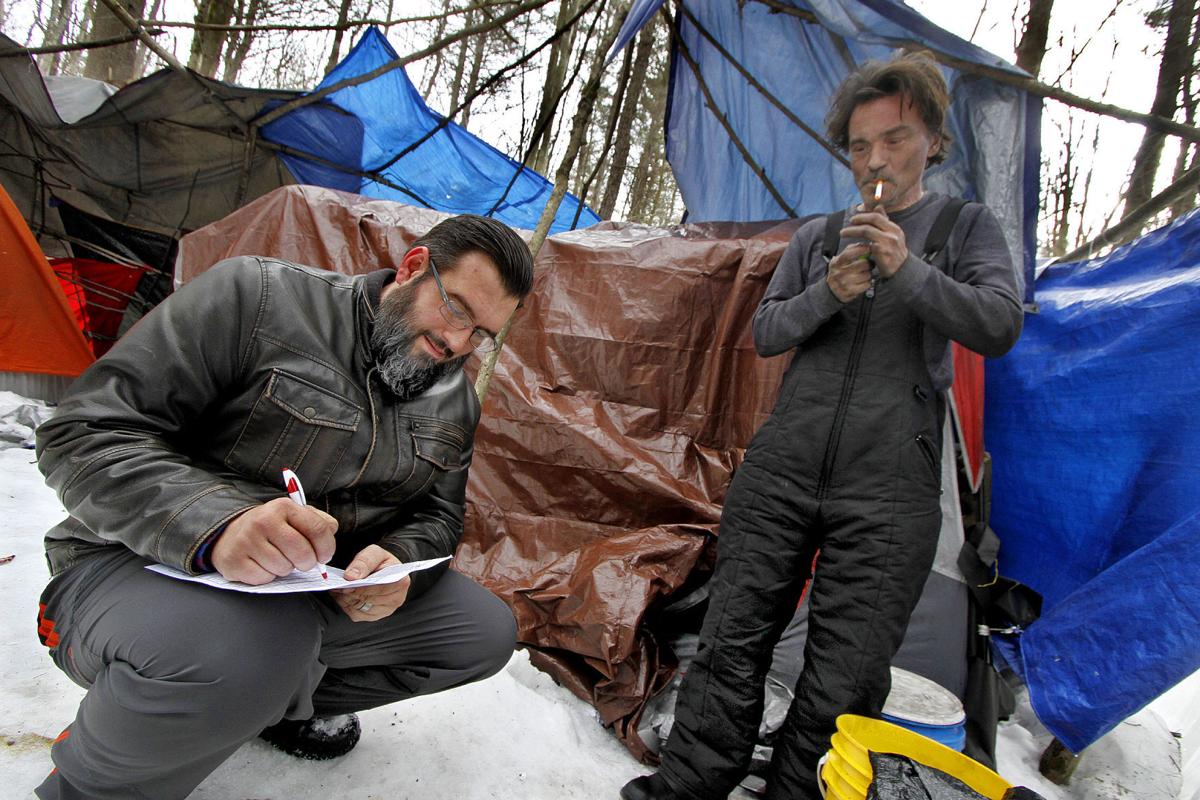 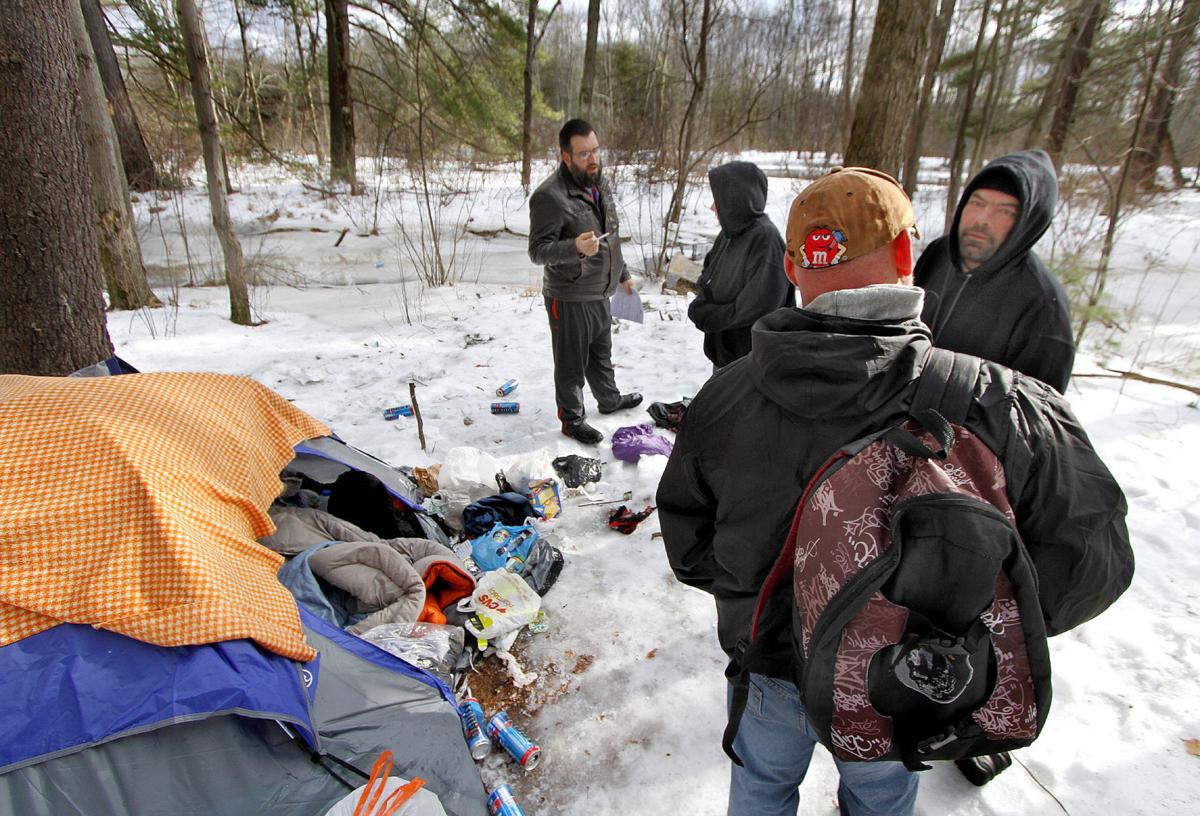 Homeless outreach workers Travis Rowe, background left, and Rob Waters, foreground, take down information provided by homeless couple Tiffany and Darby Wednesday morning at their encampment in a patch of Keene woods. Rowe works for Monadnock Family Services, and Waters for Southwestern Community Services. Darby apologized for the messy area, saying he hadn’t been “home” for a little while. 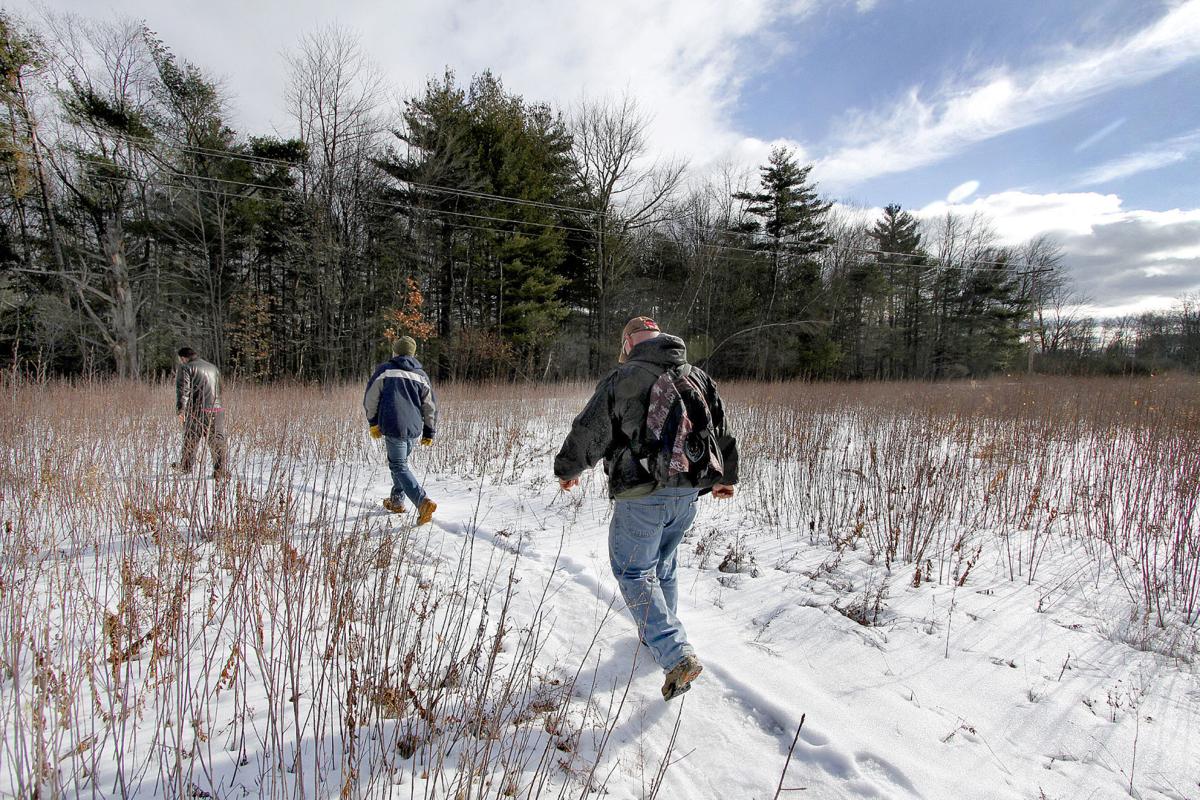 From left, Travis Rowe of Monadnock Family Services and Ronnie Witham and Rob Waters of Southwestern Community Services trek off in search of the homeless in Keene Wednesday morning for the annual point-in-time survey.

Homeless outreach workers Travis Rowe, background left, and Rob Waters, foreground, take down information provided by homeless couple Tiffany and Darby Wednesday morning at their encampment in a patch of Keene woods. Rowe works for Monadnock Family Services, and Waters for Southwestern Community Services. Darby apologized for the messy area, saying he hadn’t been “home” for a little while.

From left, Travis Rowe of Monadnock Family Services and Ronnie Witham and Rob Waters of Southwestern Community Services trek off in search of the homeless in Keene Wednesday morning for the annual point-in-time survey.

They make up the state’s least visible population.

And on Wednesday, staff of nonprofit organizations, shelters and housing agencies sought to find out just how many homeless residents live in New Hampshire, as part of an annual point-in-time count.

Rob Waters works in homeless outreach with Southwestern Community Services, a Keene-based nonprofit agency that fights poverty with housing assistance and other programs. Waters and two colleagues crossed frozen streams and trekked through the woods for more than half an hour Wednesday morning before finding what they were looking for: one tent.

They journeyed to this encampment to count those who call this tent home. After spending more than an hour in these woods, Waters found three people.

But he and his colleagues were “in search mode,” as Waters calls it, looking for any homeless people they could find as part of the national count. They spent hours checking wooded areas behind a hospital, shopping centers and cemeteries, checking for any signs of camps.

Even if Waters or one of his colleagues believed just one person occupied a camp, they were going to journey through the terrain to find that person and add him or her to the count.

The U.S. Department of Housing and Urban Development requires any organizations that receive federal funding for homeless assistance from the agency to complete an annual point-in-time count. Conducted each January, this is a coordinated effort to count a community’s homeless population. The data are released several months later, typically closer to the end of the year.

In Keene, more than 50 people across at least 10 agencies and organizations participated Wednesday by canvassing campsites and manning checkpoints at places such as The Community Kitchen and Hundred Nights shelter and resource center.

While Southwestern Community Services covers Cheshire, Sullivan and the western portion of Hillsborough County, Waters said efforts for the organization’s count are concentrated in Keene.

“Homeless encampment sites are typically found in larger, populated areas based on the fact there’s more resources there,” Waters explained.

HUD-funded organizations like Southwestern Community Services may serve a broad range of individuals, but the count uses a very specific definition of “homeless.”

According to HUD’s website, a sheltered homeless person is “an individual or family living in a supervised publicly or privately operated shelter designated to provide temporary living arrangement,” which might include a motel room if it was paid for by a charitable organization or state or federal program.

An unsheltered homeless person is someone who must regularly sleep overnight somewhere “that is a public or private place not designed for or ordinarily used as a regular sleeping accommodation for human beings,” according to the website.

“It could be a car, could be a tent in the woods, could be a park bench somewhere,” Waters said. “But my count wouldn’t include people that would be doubled-up with a family member or friend.”

While Southwestern Community Services would offer assistance to people who are couch-surfing, they’re not included in the federal definition of “homeless” for the count.

Besides tallying the number of homeless individuals, those taking the count ask a few survey questions and collect data to help better identify the homeless population, including each person’s race, ethnicity, gender, general age range and veteran status.

Travis L. Rowe is an outreach specialist who helped Waters canvass the woods Wednesday. Rowe works at Monadnock Family Services, a nonprofit mental health agency based in Keene. He is not a mental health professional; rather, he focuses on finding homeless people in need and streamlining the process of connecting them with Monadnock Family Services.

Working as an outreach specialist gives him an advantage during the count, Rowe said.

“They know Rob (Waters), they know me, because we’re the ones that go out to the sites,” Rowe said. “So, when we’re doing the PIT count, I can ask these questions because I’m not new to these people. They know me.”

He admitted, however, that the mobile nature of the homeless population presents difficulties during the count.

“You’ll see people carrying tents around with them because they move from different sites every day, so it’s very hard to really understand the total number,” Rowe said. “We have people who are homeless for three weeks, but this one night may be the night that they’re not going to go to their site.”

Another challenge is finding people living in their cars.

“It’s easier to go find somebody in a tent because you can go find footprints,” Rowe said. “When somebody’s sleeping in their car, you can’t follow tire tracks in a parking lot.”

Sometimes, he said, outreach workers may get a tip about someone who is living out of their vehicle, but that person can easily move from one location to another several times in a day.

“And that’s the problem with this count,” Rowe said. “You can’t guarantee that all those people are counted, even though we know they’re sleeping in their cars.”

Regardless of the count’s shortcomings, the study goes on. The website for the National Alliance to End Homelessness states that, “despite its flaws, the annual point-in-time counts result in the most reliable estimate of people experiencing homelessness in the United States from which progress can be measured.”

That measurement is vital to determining a need in a community. And Rowe and Waters said results from counts are used to allocate funding for homeless assistance programs, which is why accuracy is so important.

Waters said he wants to model the count in Keene on Nashua’s approach, which he has heard is much more elaborate and involves more community partners. If local businesses got involved and offered things like free haircuts or snacks, he said, there might be more voluntary participation from homeless people who live in encampments.

“Something as little as a haircut … that can change the whole course of the game for them,” Waters said. “We may not get 100 percent accuracy on a count, but we can get much closer if we’re making some of this more attractive with getting people’s information.”

When he conducts his survey for the count, Waters also takes the opportunity to check on each person’s supplies and ask if they need any extra blankets, tarps, tents or food.

“We’re constantly trying to create a great rapport with everybody, so they know that they can come to us if they need it,” Waters said.

Raising awareness of the count may be another way to dispel the various stigmas that follow the homeless, according to Waters, including that they are to blame for their situation.

“Personally, I hate that,” he said. “Some people have a terrible event that happens, like maybe their house burns down or something.”

Getting more of the community involved in the annual point-in-time count might also encourage others to be more open-minded, he added.

“Smiling and saying ‘hi’ goes a long way,” he said. “Not every person experiencing homelessness is looking for a dollar.”