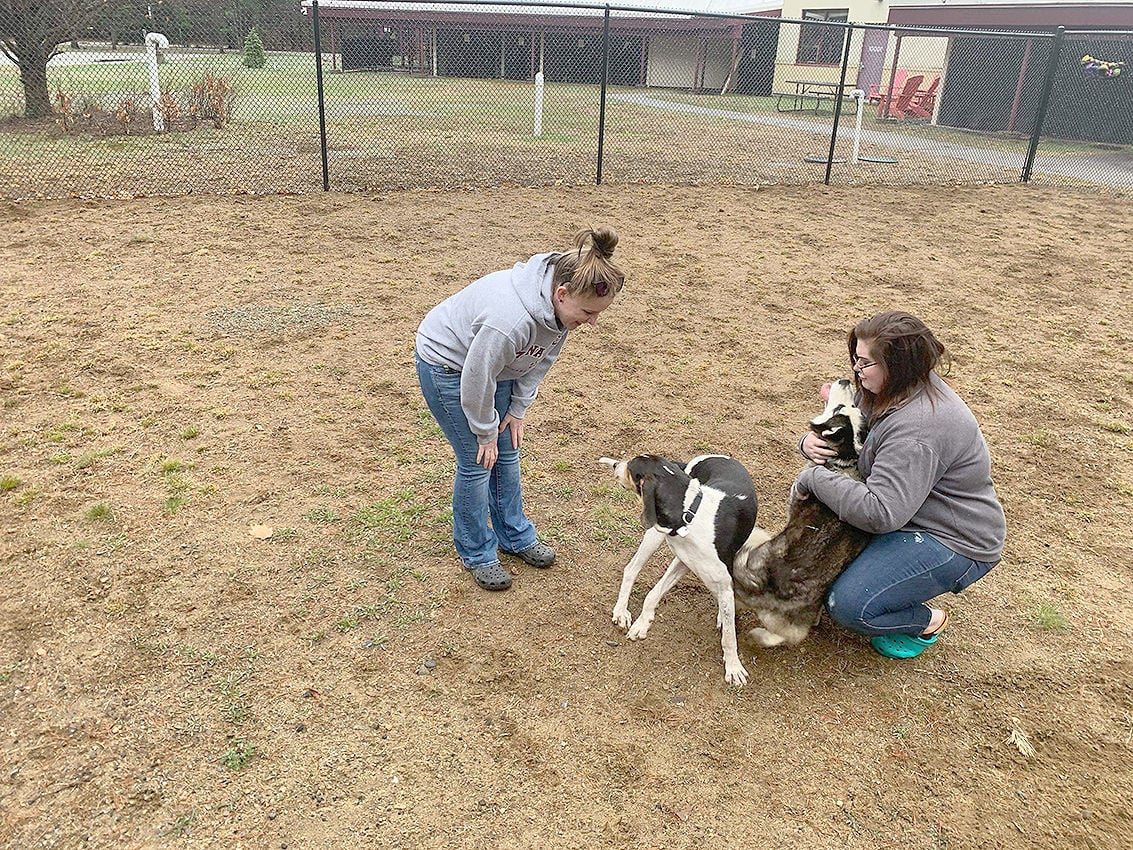 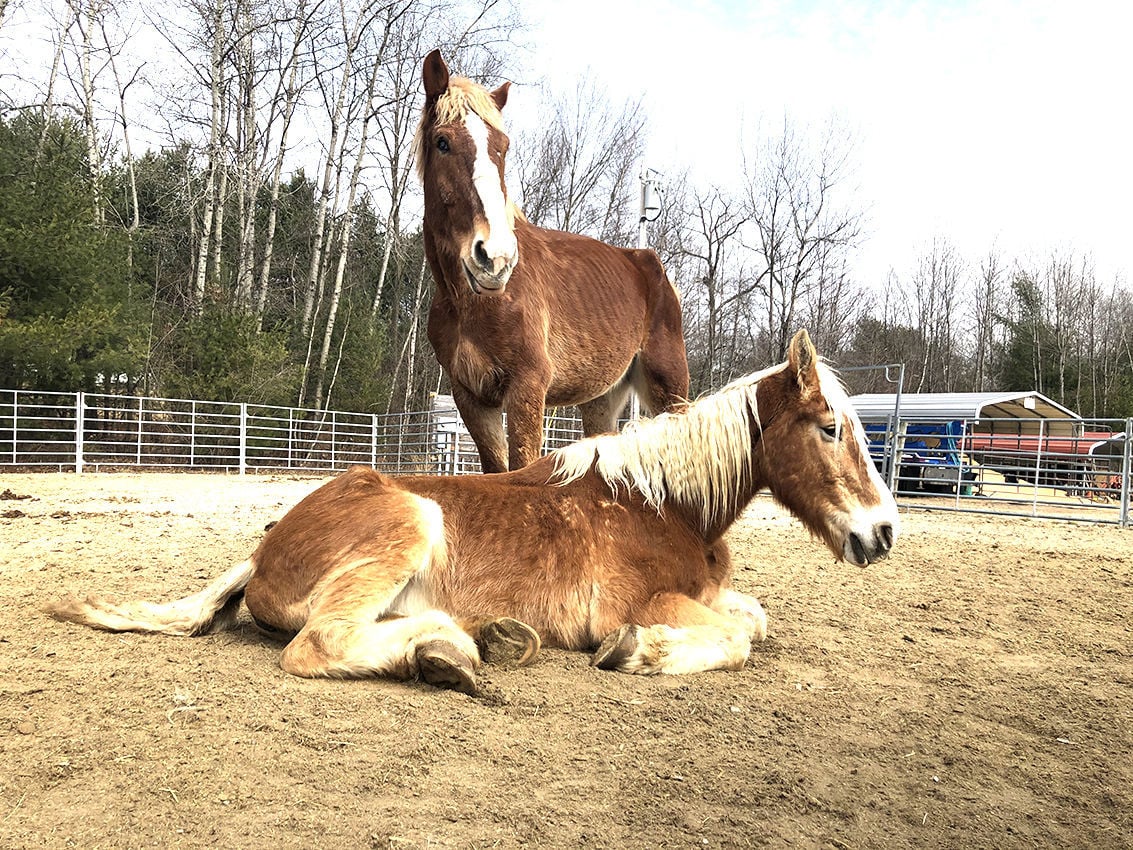 Mighty Mike and Patty get some air at Draft Gratitude in Winchester.

Mighty Mike and Patty get some air at Draft Gratitude in Winchester.

While area animal shelters had braced for an onslaught of pet surrenders and abandonment due to the COVID-19 crisis, they haven’t experienced this yet.

But as the pandemic continues to affect public health — and economic and social norms across the country — staff at these centers say they remain concerned they could soon see a rise in animals needing homes.

Whether that happens will depend, in part, on when certain restrictions are lifted, Emily Kerylow, director of operations for the Monadnock Humane Society in West Swanzey, said Thursday.

She pointed to Gov. Chris Sununu’s March executive order temporarily banning evictions and foreclosures. Evictions are normally the number one reason for animal surrenders at the humane society, Kerylow said.

“Will that change a few months from now? We don’t know,” she said. “I think we’re waiting to see what the secondary effects are for us. Once those things are lifted, we may be seeing more surrenders, but time will tell at this point.”

So far, however, Kerylow said the humane society hasn’t received any calls from pet owners looking for temporary shelter for their animals due to the pandemic.

“We are available as an absolute last resort, but we haven’t experienced that yet,” she said.

In fact, public health and animal-welfare agencies recommend pets stay at home with their owners and, like humans, practice social distancing. The Centers for Disease Control and Prevention advises people who are sick with COVID-19 to stay away from their pets and put them under the care of another member of their household.

In rare cases, animals can contract the virus from people who are infected, according to the CDC.

While not seeing a rise in surrenders, Kerylow said humane society staff have seen an uptick in the use of the organization’s pet food pantry, which people are accessing curbside.

The pantry continues to receive donations from the community, according to Kerylow, who said she hopes that in the next couple of weeks, the humane society can start delivering some of that food to pet owners who are shut in without access to transportation.

“We’ve never done anything like this before. Everything is on the table. We’re seeing what’s out there so we can respond appropriately,” she said.

As of Thursday afternoon, Draft Gratitude, a horse rescue organization in Winchester, had 12 horses in its care with another one on the way.

While founder Rebecca Roy hasn’t received any calls from people looking to place their horses temporarily during the pandemic, she said she has received requests for permanent care. But the number of calls isn’t higher than normal, she noted.

Like Kerylow, though, Roy said she’s concerned about what could happen in the coming weeks as the reality of the pandemic and its impact — including lost income — continues to set in for people.

Meanwhile, COVID-19 has created a huge need for Fast Friends Greyhound Adoption in West Swanzey to take in greyhounds from Florida, Development Director Amy Roy said in an email Thursday.

Florida passed a constitutional amendment in 2018 requiring greyhound racing to end in the state by Dec. 31, 2020. All tracks have temporarily closed because of COVID-19 concerns. But now, several have decided to shutter ahead of schedule, resulting in 1,000 to 1,500 greyhounds needing to be moved from the tracks to adoption groups around the country, she wrote.

Fast Friends has already taken in 15 of those greyhounds and has committed to accepting as many as the organization can place, she said.

On top of all this, the last greyhound track in Alabama also suddenly closed recently, she said; that’s another 400 to 500 greyhounds needing placement.

“That is a huge amount of dogs needing homes,” she said.

But as they continue to monitor the outbreak, several of these animal rescue organizations have noted a rise in people interested in opening their doors.

At Draft Gratitude, which focuses on caring for aged draft horses, Rebecca Roy said she’s seen an uptick in calls from people wanting to know the requirements for adopting these animals. At this point, she noted, it’s hard to judge if the elevated interest has been fueled by the pandemic.

“I don’t know if people are making shifts in their lives or priorities, or they’re home and have more time on their hands to follow up on what they’ve been thinking about,” she said.

At Monadnock Kitty Rescue and Adoption in Jaffrey, adoptions have been on the rise since the crisis started, according to Heidi Bourgeois, adoption manager and a member of the organization’s board of directors.

“A lot of people have called saying they’ve been thinking about adopting for a long time, and now seems like a good time,” she said.

“So many people are contacting us — many more than normally do — since they are home and have the perfect opportunity to socialize a new family member,” Amy Roy wrote. “We are working with all our new adopters on how to handle any separation anxiety their dog may experience when they DO need to return to their jobs.”