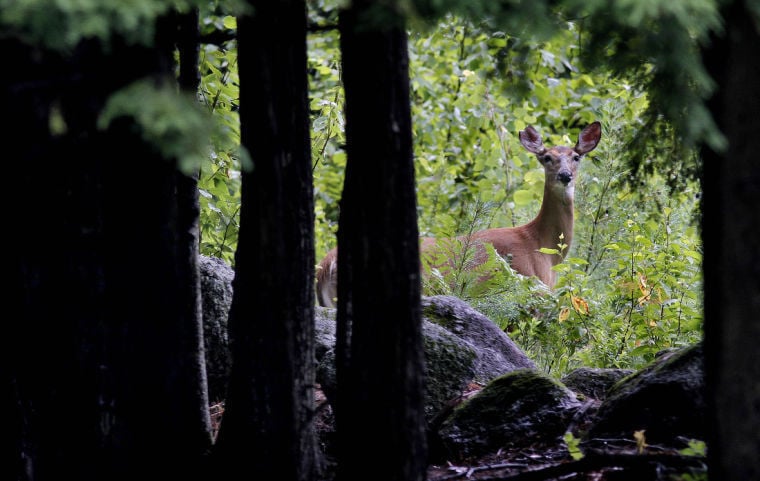 A deer gazes through trees and foliage off Route 9 in Antrim in this file photograph from July 2014. 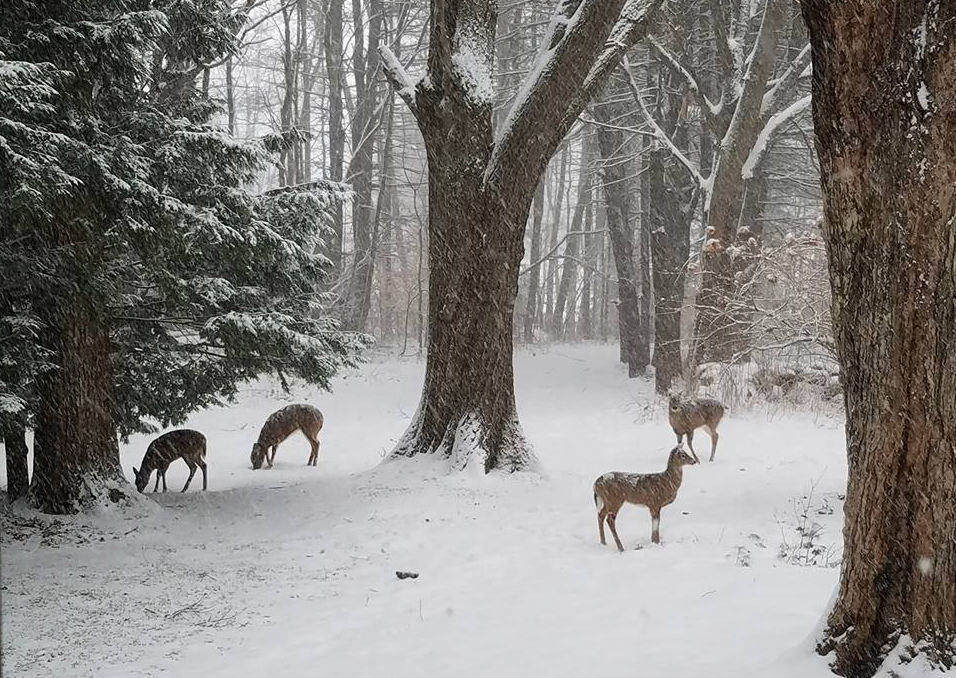 Four white-tailed deer brave a snow squall to kick up some snacks behind a house on Lake Warren in Alstead in this file photo from December 2016.

A deer gazes through trees and foliage off Route 9 in Antrim in this file photograph from July 2014.

Four white-tailed deer brave a snow squall to kick up some snacks behind a house on Lake Warren in Alstead in this file photo from December 2016.

A growing deer population was dispersed by extreme weather events, making it easier for hunters in the right areas to take advantage of the saturation, according to wildlife and forestry professionals.

But while this mix of factors helped hunters get the most bang for their bullet, it could pose long-term hassles for farmers and gardeners.

Although Cheshire County has had a relatively average deer-hunting season, other parts of the state, led by Coos County, saw increases as high as 27 percent in the number of kills over the same time last season, according to recent data from the N.H. Department of Fish and Game.

Grafton and Merrimack counties each saw a 17 percent increase in deer tags.

But according to Dan Bergeron, Fish and Game’s deer project leader, the tag breakdown by county can be a misleading indicator given the distances many deer are traveling to find food.

Tags registered by Fish and Game keep track of the number of kills each deer-hunting season. The overall season is split into periods based on the weapons used: Bows, muzzleloaders and the broader category of “regular firearms.”

Firearms can be used until Sunday, and the entire season ends a week later.

Extreme weather events on the heels of several mild winters are at the center of a perfect storm for optimal deer hunting, experts at the University of New Hampshire Extension program say. After the Granite State experienced a mild winter with a late frost, the hottest summer in nearly 150 years brought a July drought, according to the National Weather Service.

Since then, New Hampshire saw rainfall of around 15 inches above average for the fall, according to the UNH Extension’s forestry team and US Climate Data.

A higher-than-average deer population — thanks to those mild winters that kill off fewer deer — began to struggle to find food in normal places, Tarr and Bergeron said.

Normally, a mild winter would leave more food available, but the drought drastically lowered the yields for key food sources, according to Tarr.

Deer in New Hampshire mostly eat beech nuts and acorns, which were much harder to find in wooded areas this year.

Tarr said the migration patterns of deer are critical to understanding each hunting season.

Much like snowbirds with second homes in Florida, deer try to have one home range that works through the spring to late fall and then another for the winter.

To protect themselves from the snow and to find food efficiently, deer usually hole up in dense forests of spruce or fir trees in the north of the state and under hemlocks in the south, Tarr said.

But once the cumulative effect of the mild winter and drought began to hit, the high deer population had to extend beyond the normal 20 to 30 miles between ranges to find food.

“Most of our deer aren’t water stressed like a deer in Texas would be,” Tarr, who works on UNH’s campus in Durham, said of the effects of the drought. “... But in a year like this year, the acorn crop is horrible. There really isn’t much for acorns anywhere that I’ve seen in New Hampshire.”

All of this is good news for hunters.

The bad news for farmers and gardeners is these resilient prancers will annihilate as many unprotected fruits and vegetables as they can, said George Hamilton, a field specialist in fruit and vegetable production at UNH Extension.

“We’re seeing more extremes in our weather patterns,” Hamilton, who works out of the extension’s Hillsborough County office, said Tuesday. “... So we have seen an increase in (the) amount of damage being done to fruits and vegetables, I know in the southern part of the state that I work in.”

Hamilton said this has led many farmers to invest in souped-up security, which he described as “exclusion-type fencing,” to protect their crops from deer, bears and other critters.

“Which is an additional cost to the grower,” he said. “They’re not going to see any return in the sense of being able to make money.”

Depending on the severity of the coming winter, the deer population could continue to grow or slow down, and the next hunting season may not build off of any particular momentum from this one, Tarr said.

But he stressed that New Hampshire deer have been able to thrive in the state’s traditionally frigid winter climate for so long for a good reason.

“Deer in New Hampshire are incredibly resilient,” he said. “They are designed to survive. Over evolutionary time, they are animals that are designed to deal with a lot of this (weather) variability.”

So, with weather extremes only increasing with climate change — perhaps even more quickly than expected, according to the recent United Nations and Trump administration reports — the fencing industry may end up happier than the deer hunters.

“Our deer herd overall is quite healthy,” Tarr said, “and I think our gardeners should expect that in areas where there is a lot of human development, probably deer numbers can be expected to increase over time, primarily due to difficulty in hunter access in some of those areas.”

As for the strategy among the deer, far less is known by the woodland experts.

“We don’t know what they know,” Tarr said.