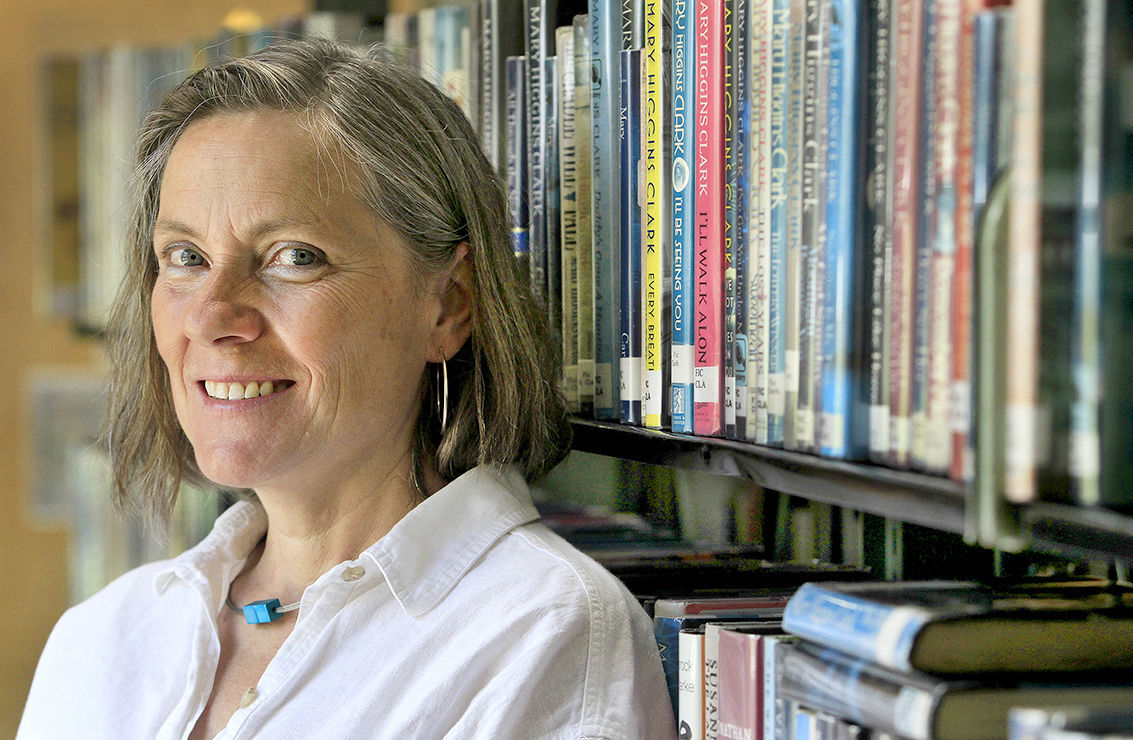 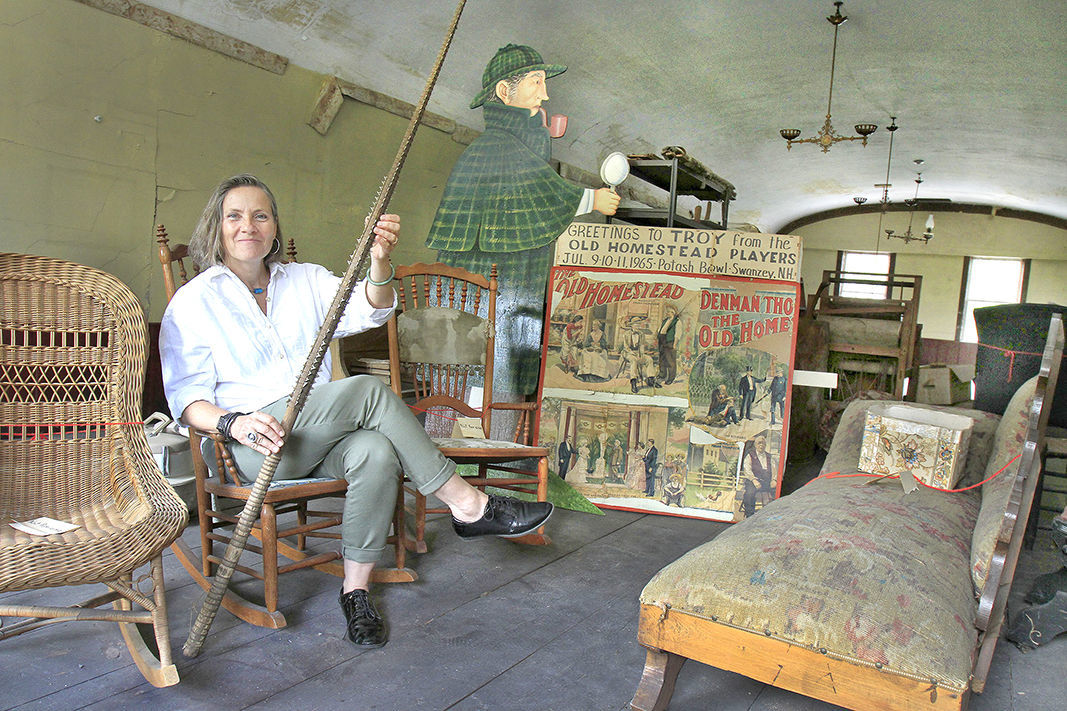 Cadigan Gregory, director of the Mount Caesar Union Library in Swanzey Center, in the attic with a variety of

antiques, including a harpoon lined with shark’s teeth that she is holding.

Cadigan Gregory, director of the Mount Caesar Union Library in Swanzey Center, in the attic with a variety of

antiques, including a harpoon lined with shark’s teeth that she is holding.

SWANZEY CENTER — “I love it up here,” Cadigan Gregory said as she walked up a flight of stairs, next to wallpaper that looks like a 19th-century decorator’s take on ancient Rome. “If you like attics, you’ll be psyched.”

She stepped onto the third floor of Mount Caesar Union Library in Swanzey — a long hall with an arched white ceiling, dark wood floorboards and windows on either end.

“There’s some things up here that I think are absolute treasures,” said Gregory, the library’s director for about 14 years, as she moved through a jumble of aging wooden furniture, scattered papers and items of obscure vintage and purpose.

She paused to point out what looked like a waist-high umbrella stand, carved out of a single hollowed-out tree trunk several feet in diameter. Then she came to her favorite item: a ribbed stick about 6 feet high, leaning against a shelving unit. For a long time, she thought it was a piece of rebar. Then she looked closer and realized it’s a wooden harpoon lined with rows of shark teeth. “And they are still sharp,” she whispered.

In that room, one could be forgiven for mistaking an antique spear for modern construction debris. It houses a delightful jumble of 19th- and 20th-century bric-a-brac, most of it somewhere between trash and treasure.

In one corner, a glass case encloses a model ship with three masts. Bookshelves and tables hold volumes from more than a century ago, their bindings faded and peeling, with titles to match the times: “THE MOTHER AT HOME,” “CONFESSIONS OF A SCHOOLMASTER,” “M’GUFFY’S NEW FIFTH ECLECTIC READER,” “A WHALEMAN’S ADVENTURE.” On one surface rest four swordfish swords — 3-foot-long pieces of bone tapered at one end.

Gregory picked up a much smaller, curved bone, with a tag affixed. “The jawbone of something that was deemed worth saving,” she said.

As she picked her way through the room, Gregory narrated bits of the library’s past.

Built in 1843, the structure — which joined the N.H. State Register of Historic Places in April — started as a seminary. It became a library after George and Lucy J.W. Carpenter of Swanzey transferred it to the Mount Caesar Union Library Association for $1 in 1885. (The deed requires, among other things, that it forever remain a library and “never be used for dancing, card playing, gambling or skating,” or for “any immoral purpose whatever.”)

Around the same time, an antiquarian society formed and started asking the townsfolk to donate items, which were stored in the third-floor attic. “So in 1885, they were giving things that were old,” Gregory said.

The real treasures are not in the attic but below ground, in a fireproof underground room built several decades ago. Wooden snowshoes hang on a wall next to an 1892 oil painting of a river landscape in autumn. A large drum, used to muster soldiers during the American Revolution, sits on a shelf. Spinning wheels cluster in a corner, near a halberd supposedly carried by sergeants in the revolution to symbolize their rank. Boxes of old clothes are stacked here and there, descriptions scrawled in marker: “STRAW HATS,” “LANE-PEABODY WEDDING DRESS 1893.”

“A child’s shoe with wooden soles,” Gregory said, reading from a description. “… Branding iron.” She held up a pleasingly symmetrical item made of three intersecting pieces of wood. “I don’t know what these are for, but this is really cool.”

Having a better place to display those objects is one reason the library launched a $2 million capital campaign at the end of last year. The plans call for various renovations and improvements, including turning the third floor into a museum space and building an elevator to bring visitors up there.

“Our library is not just a library; it’s a historical museum,” said Mary Wood, president of the library’s board of trustees. “That’s what we’re supposed to be — and we don’t have a place to display all those antiquities.”

But it’s not just about looking to the past. The renovation plans also call for making the entire structure more accessible — a top concern identified in a survey of community members last year — and creating an expanded children’s area, among other improvements.

Meeting the needs of a 21st-century town is about more than storing novels and old wedding dresses, Gregory, a Jaffrey resident, said.

“Most libraries are becoming not just, you know, repositories of books and materials, but also more community centers,” she said, providing everything from camaraderie to Internet access.

And for Gregory, there’s a bigger philosophical point.

Growing up in Keene with five siblings, Gregory learned the value of libraries early in life. “My mom took us to the Keene Public Library every week,” she said. “All six of us would take out as many books as we were individually allowed. We would all read our own books, we would all read everyone else’s books, and then we’d all take them back late. And then take out a whole ’nother, like, carload of books.”

She remains an avid reader, delighting in all the knowledge one can gain from books. “People will say, ‘How do you know what a barouche is?’ And I’ll say, ‘I read it. Yeah, from those novels written by so-and-so.’ ”

(A barouche, she explained a moment later, is a type of horse-drawn carriage.)

Gregory studied art at the Rhode Island School of Design in Providence and then lived in various places, including San Francisco, Oregon and France, before settling in the Monadnock Region with her husband, Sean Wiley, about 30 years ago. She began working at the Toadstool Bookshop in Keene, eventually becoming a book buyer for the company. In 2005, she was hired for the Mount Caesar library director job.

“It was a really steep learning curve,” Gregory said. She had no prior library experience, though her time at the bookstore “segued right in,” she said. “I knew about people’s reading tastes; I knew about the publishing industry.”

One of Gregory’s focuses as library director has been reaching kids. Standing by shelves of picture books, she spoke about plans for an expanded children’s section as part the anticipated renovations.

“We’re so cram-packed in here,” she said, pointing to various types of books, toys, a reading chair and a puppet theater. “… We can’t have story time in here because there’s nowhere for the kids to sit.”

A bit later, she described working with elementary-schoolers who gather for summer programming at the nearby Monadnock Regional Middle/High School.

“In the summertime, I sort of try to take the library to the kids,” she said. “’Cause this idea of this building full of kids, sitting over here — with no books! All summer! It’s like, no!”

Gregory started going to the school every day to read aloud to the children. Once a week, she would drop off dozens of books for them to borrow, and switch them out for new books a week later.

Wood described Gregory as engaged and committed to the community. “She’s very invested in the library,” Wood said. “She’s been there a long time, and she’s reliable, she’s personable, she loves the community, and she knows everybody. … Sometimes they don’t have to get their library cards.”

Gregory said she has always had an urge to serve the public, a desire she traces to her politically active mother. During her children’s youth, Mary Gregory protested the Seabrook nuclear plant, spent time in jail for civil disobedience and took her children to Quaker meetings.

“I feel like this job is absolutely being of service,” she said. “And it’s not just making sure that little kids have the latest Lego Ninjago book, or that someone has the latest James Patterson or found that old Agatha Christie.”

Rather, it’s “the open door welcome that people get at a public library,” she said. “... There’s no monetary transaction happening, there isn’t a power setup. I mean, this is the people’s place.”

At a glance: Cadigan Gregory