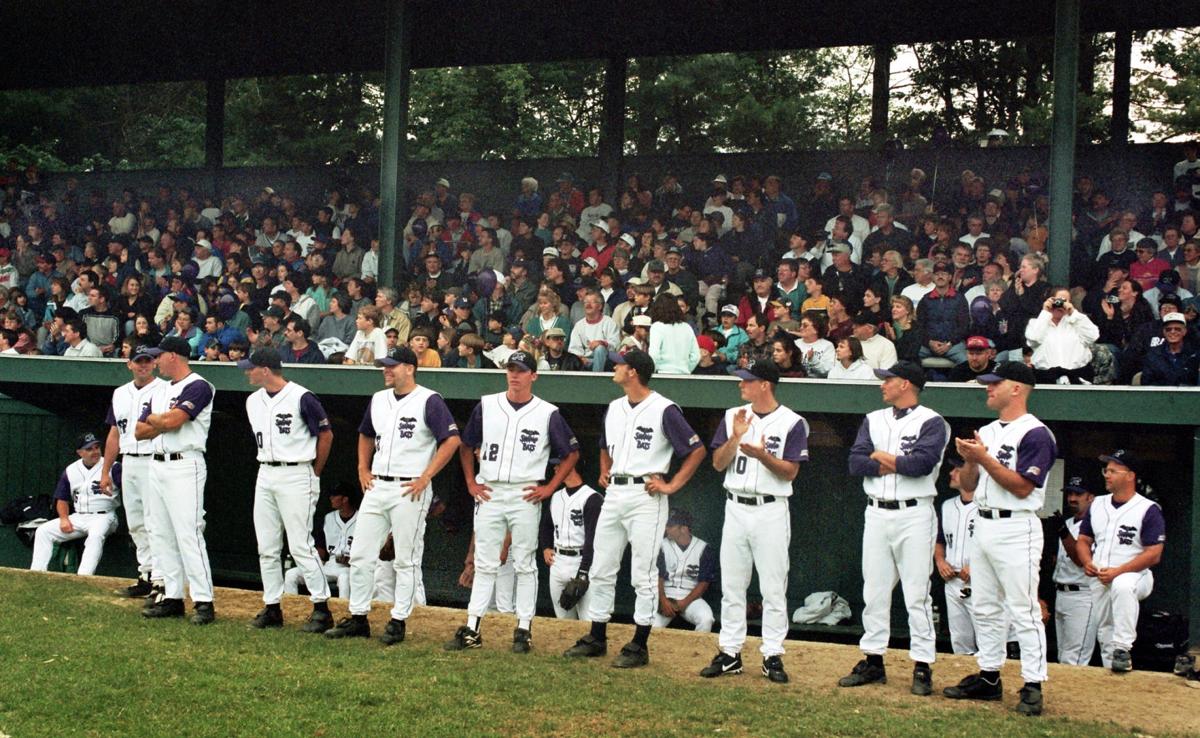 The Keene SwampBats stand in front of their dugout as the players are introduced for the home opener of the team’s inaugural season on June 5, 1998. 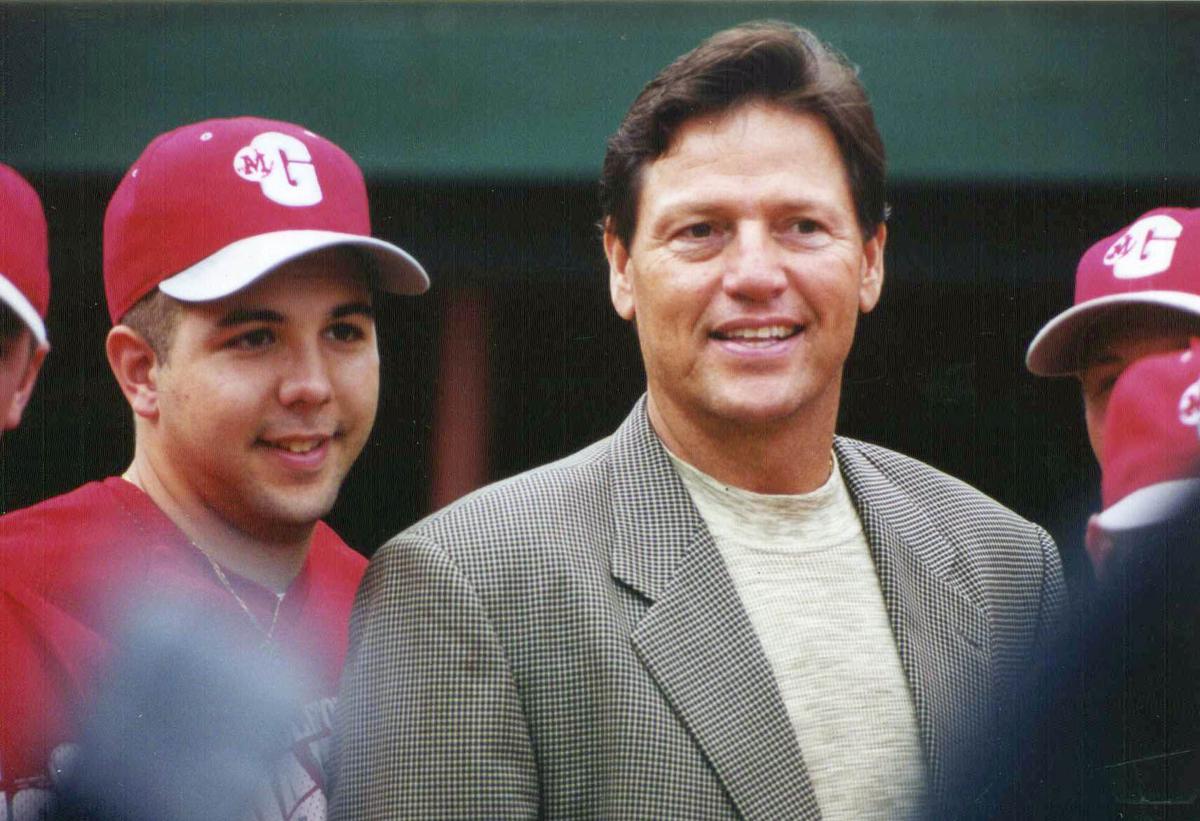 Hall of Famer and former Red Sox catcher Carlton Fisk poses with players during an NECBL All-Star Game at Alumni Field, hosted by the SwampBats. 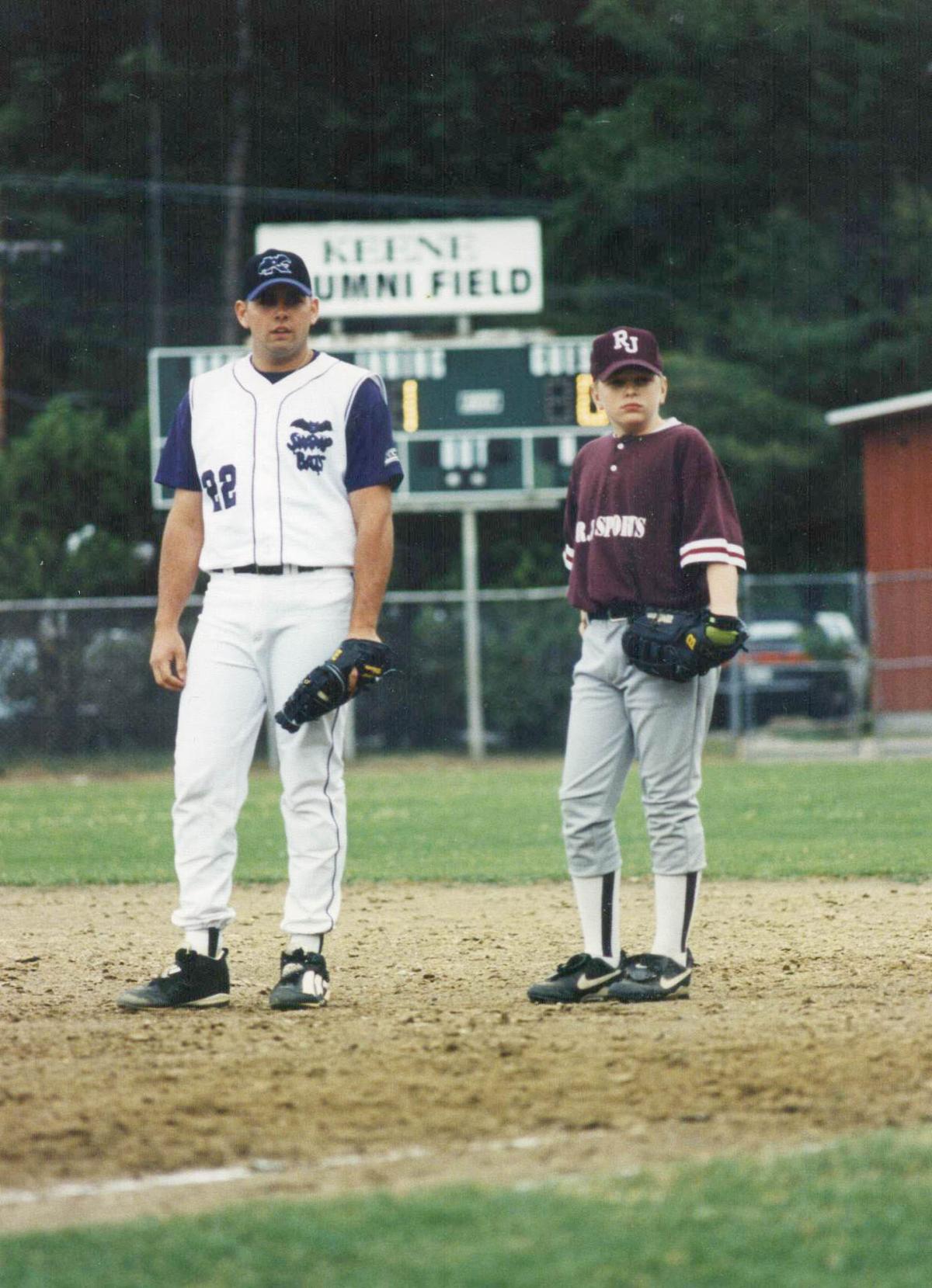 Gil Barkman is seen at first base with youth baseball player Zach Rokes during the team’s inaugural season 20 years ago. In the early years, the Bats were introduced along with players from a chosen youth team at each position. 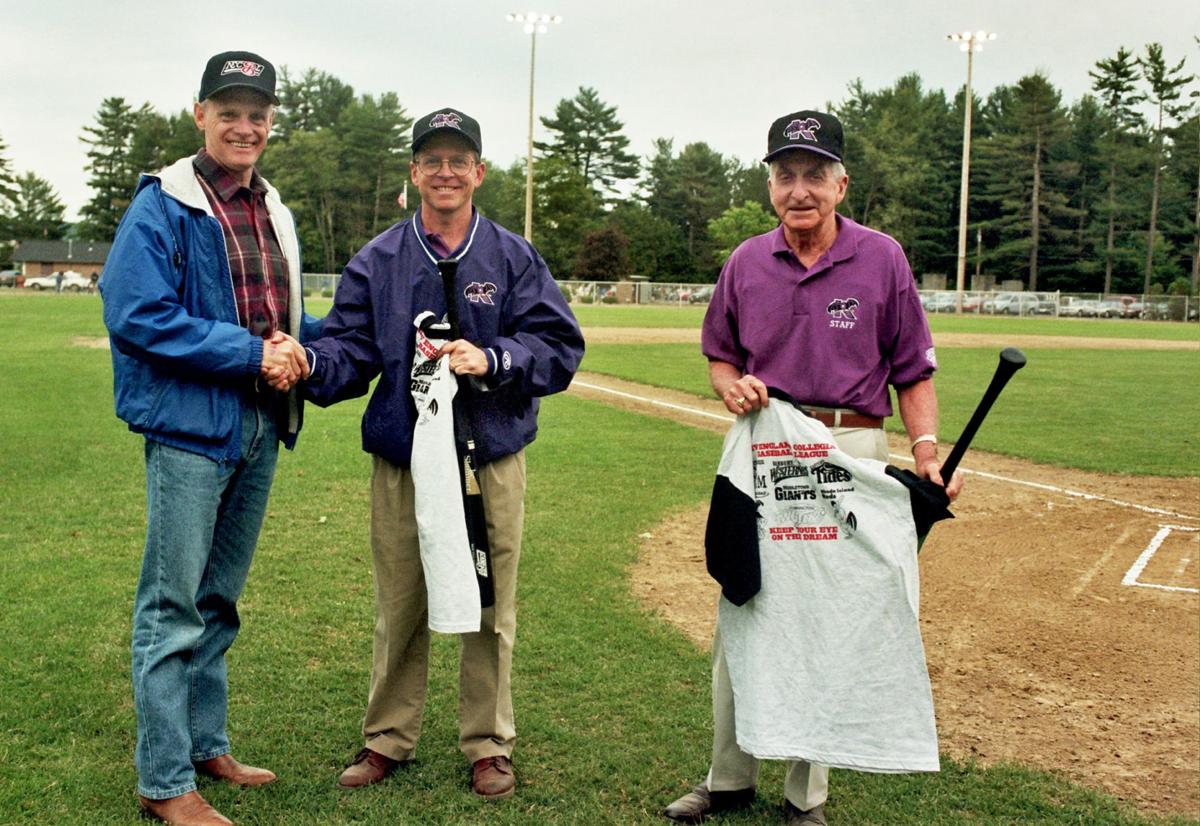 Kevin Watterson, center, and John Watterson, right, represent the SwampBats in this photo from their home opener on June 5, 1998.

The Keene SwampBats stand in front of their dugout as the players are introduced for the home opener of the team’s inaugural season on June 5, 1998.

Hall of Famer and former Red Sox catcher Carlton Fisk poses with players during an NECBL All-Star Game at Alumni Field, hosted by the SwampBats.

Gil Barkman is seen at first base with youth baseball player Zach Rokes during the team’s inaugural season 20 years ago. In the early years, the Bats were introduced along with players from a chosen youth team at each position.

Kevin Watterson, center, and John Watterson, right, represent the SwampBats in this photo from their home opener on June 5, 1998.

Twenty years. Wow. It’s been 20 years since Dan Moylan laced a line-drive double down the left-field line against the long-defunct Eastern Tides in Willimantic, Conn., the first hit in the history of the Keene SwampBats.

It’s been 20 years since Shah Bobonis threw the first-ever pitch at Alumni Field before 2,347 fans. Tucker Bradley, an outfielder/pitcher from Georgia on this year’s squad, wasn’t even a month old.

It’s been 20 years since the late Keene Mayor Pat Russell and the City Council honored the team with an official greeting on the eve of its debut in the New England Collegiate Baseball League, 20 years since more than 400 fans turned out for Media Day at Alumni Field merely to meet the players and soak in the atmosphere.

“I’ve been here since 1969 and I don’t know of anything that’s created as much interest or excitement,” Keene businessman Bob March, who died earlier this year, said 20 years ago of the hullabaloo.

And what a wild and woolly opening season it was.

The SwampBats were a hodgepodge collection of Division I, II and III players, some with Major League talent, others not so much. They were led by Manager Dave Pano, a baseball lifer who went on to coach St. Petersburg College for 13 years and today is hitting coach for the Vancouver Canadians, a Toronto Blue Jays minor league affiliate.

“That first year was fun. We didn’t know what we were doing,” said Kevin Watterson, the team’s founder and president. “We had a character as a manager.”

They also had some character players, and some players who were characters. Who can forget Gill “The Thrill” Barkman of the Bronx, who hit 14 home runs that still stands not only as the team record for homers in one season, but also the NECBL record? He earned his nickname with a flamboyance that endeared him to the Alumni fans, while drawing the enmity of opponents.

“They hated him,” Watterson says. “He had to have been the most hated player in the league.”

Today, Barkman keeps the peace as a police officer in the Bronx.

Bobonis, the pitcher from Miami, swapped his baseball glove for mixed martial arts gloves. Shah “The Showstopper” Bobonis has a 16-12 record as a 145-pound featherweight inside The Octagon of the UFC (Ultimate Fighting Championships).

Home-towners Moylan and Jon Watterson, Kevin’s son, were also on that original 1998 squad, setting team records yet to be eclipsed. Moylan is tied with Ashley Freeman and Jim Negrych — last year’s manager — with most games played (42), and Watterson is the all-time leader in sacrifices with eight.

Perhaps the most talented player to ever don a SwampBats uniform was on that inaugural team as well. Alfredo Amezaga was a slick-fielding shortstop, who played nine years in the majors. He left Keene after six weeks, a teenager homesick for Mexico, but made his mark.

“He might have been the best we ever had,” Watterson said. “Every night he made a breathtaking play.”

That’s saying something, since 21 players who wore the purple and black have played in the majors. Heck, last year 40 percent of the Miami Marlins’ starting rotation pitched for the SwampBats (Tom Koehler and Adam Conley).

You can’t talk Major Leagues without a nod to outfielder Andre Ethier. Though injuries have slowed him, Ethier was a mainstay in the Los Angeles Dodgers lineup for a decade. In Keene, he was a shy 19-year-old who played right field and hit .220. It was a key stop in his learning curve.

There was the quiet and classy Tim Stauffer, who had a decent career as a pitcher with San Diego, though injuries plagued him after he left Keene.

Some players are just plain special as people. Gabe Ribas and Shaun Larkin hold that distinction for Watterson back in the team’s formative years, J.P. Sportman, Conley and Nathan Kirby more recently. Ribas and Larkin are still in baseball — Ribas as interim head coach at Santa Clara University and Larkin as coordinator of skills development for the Dodgers.

“Warriors,” Watterson said. “They were all about winning.”

Off the field, many in the core group that ran the team in 1998 are still involved, particularly Vicki Bacon. She introduced the popular tennis ball toss at every home game (fans try to throw balls into a moving car, the “Swampmobile”), the baseball buddies program and was instrumental in designing Ribby, the team mascot who is omnipresent in the city.

Treasurer Ron Manahan and PA announcer Walt Kilburn are long-timers on the board of directors. City activists such as former N.H. Senate President Junie Blaisdell, Kip Weeks, Charlie Burns, Anita Piermatti and March were all instrumental in the SwampBats’ success.

Blaisdell, Weeks and March have since passed away, as has Bob Lund, the team’s original radio announcer who will be remembered at the July 7 game. And the Bats will dearly miss the warm smile and friendly nature of Dave Cleveland, who manned the front gate ticket booth for nearly 20 years. He, too, died this off-season.

“We had influential people, who, if they believed in what you were about, got behind it,” Watterson said. “We’re a community really wrapped in baseball.”

The 19-year journey has featured four championships: 2000, ’03, ’11, ’13. They have hosted several all-star games, with Carlton Fisk and Tommy John among those throwing official first pitches.

They hosted four exhibition games against Team USA (Dustin Pedroia played here) and a memorable one-game showdown against an all-star team from the prestigious Cape Cod League. Instead of a couple of starting pitchers and relievers, the Cape brought something like nine closers to pitch one inning apiece. Watterson still marvels at that strategy, though he hates losing.

No one foresaw the impact the organization would have on its interns, who are vital in keeping it running. Many college students have used summers in Keene as a launching pad to successful careers in sports management, including a handful on the executive level in pro baseball.

“Didn’t see that coming,” Watterson said. Thus, every year at the introductory gathering he insists that incoming players treat interns and broadcasters with the same respect they give their teammates.

In baseball, of course, there are more misses than hits. When it comes to recruiting, the SwampBats have had their share of both. For every Ribas and Larkin, there’s a Leclair and Beauregard. Many years ago, Watterson passed on Monadnock Regional graduates Aric Leclair and Josh Beauregard, much to his regret. Both went on to superb careers in baseball and beyond.

“I blew it,” Watterson said.

The SwampBats host their home opener tonight at 6:30 p.m. at Alumni Field.