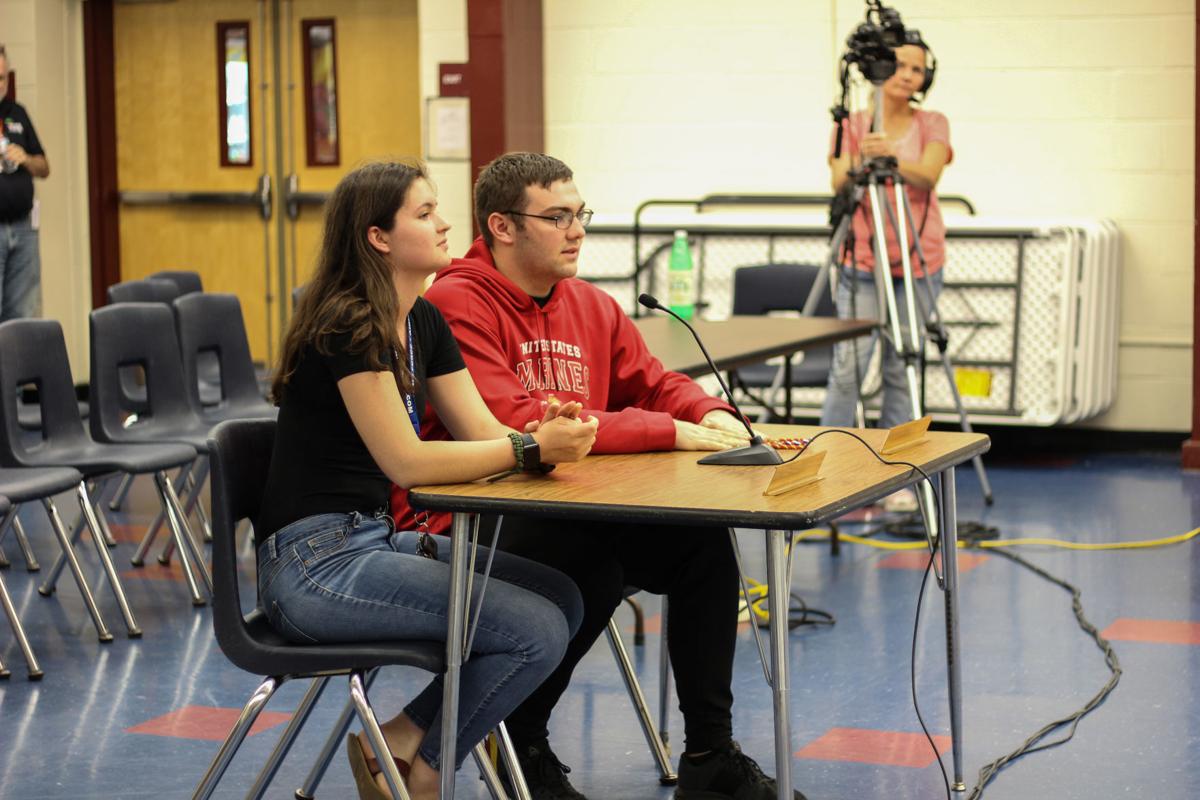 Keene High students Clarice Davis, left, and Jonathan Marsh advocate for the Keene Board of Education to create a policy allowing students to wear military sashes at graduation. Davis and Marsh are joining the U.S. Air Force and the U.S. Marine Corps, respectively. 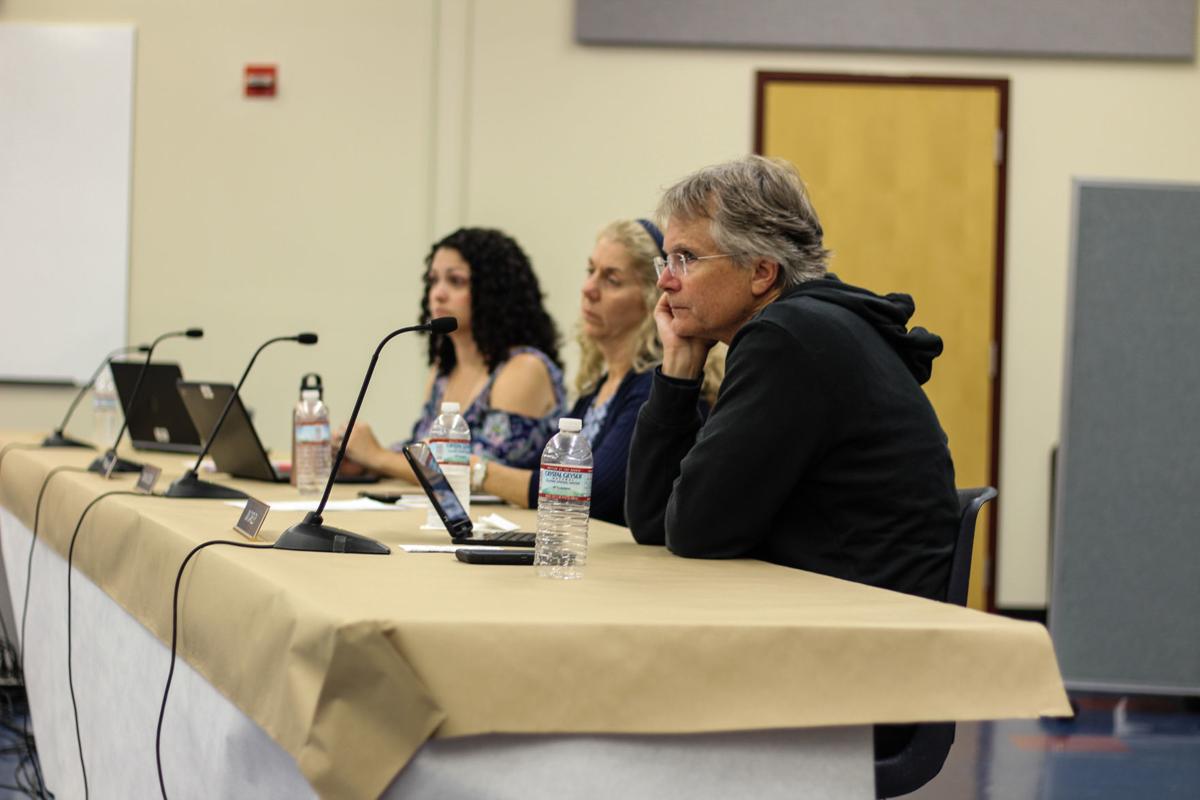 Keene Board of Education member Jim Carley, right, listens as members of the public weigh in on the issue of graduation attire at Tuesday night’s board meeting. In the background, from left, are board members Rebecca Lancaster and Dawn Mutuski.

Keene High students Clarice Davis, left, and Jonathan Marsh advocate for the Keene Board of Education to create a policy allowing students to wear military sashes at graduation. Davis and Marsh are joining the U.S. Air Force and the U.S. Marine Corps, respectively.

Keene Board of Education member Jim Carley, right, listens as members of the public weigh in on the issue of graduation attire at Tuesday night’s board meeting. In the background, from left, are board members Rebecca Lancaster and Dawn Mutuski.

Days after the superintendent gave the go-ahead for students to wear military sashes during Keene High School’s commencement ceremony this year, the Keene Board of Education laid plans Tuesday to begin crafting a formal district policy on graduation attire.

The issue gained traction on social media early last week after a group of military-bound students created an online petition asking the high school to permit the sashes, which represent the branch of service each student has opted to join. More than 3,500 people signed the petition on Change.org.

Clarice Davis, 17, of Lempster said she and other graduating seniors were told by Principal James F. Logan that the sashes, which they received from their recruiters, are not related to a school activity and would be distracting to other students.

Logan was not reachable by phone or email for comment early last week.

By law, Granite State schools must allow graduates who have completed boot camp to wear a military dress uniform for their high school commencement ceremony. The legislation, signed by then-Gov. Maggie Hassan in 2016, was named for Brandon Garabrant of Greenfield, who was not permitted to wear his Marine dress uniform at his graduation from ConVal Regional High School in Peterborough in 2013.

Garabrant was killed about a year later, in June 2014, when the tank he was in was hit by a roadside bomb in the southern Helman province of Afghanistan. He was 19.

N.H. School Administrative Unit 29 Superintendent Robert H. Malay told The Sentinel that allowing the military sashes would raise the question of whether regalia from other outside entities, such as religious groups, colleges and community organizations, must also be permitted.

Malay said students have traditionally been allowed to wear cords for school-related accomplishments and have also been allowed to decorate their caps for the past two years.

After meeting with Davis last week, Malay said Friday that he decided to allow the students to wear their sashes after all. His reason, he explained at Tuesday’s board meeting, is that there’s no existing district policy or guidance prohibiting the practice.

“We are here tonight to say thank you for letting us wear our sashes this year, but we also want to make sure that Keene students from here on out will also get the same chance that we do,” Marsh said.

Davis emphasized that the students are proud of their decision to join the military. She said attending Keene High gave her the opportunity to explore her options and, ultimately, to join the armed forces.

“I don’t think that it’s fair to give us the opportunity to meet the recruiters (at school), and then not allow us to wear the sashes representing this decision,” Davis said. “Because even though it’s not ... academic directly, the things that we learned at Keene High School really affect how we came to serve in the military.”

Another attendee, Keene resident Joseph Mirzoeff, raised concerns about the district advertising for the armed forces by allowing students to wear the sashes.

“I’m distressed at how much of our economy the military is taking over at the detriment of everything else,” Mirzoeff said. “So I would hope that you don’t allow your ceremony to market the military-industrial complex.”

During his report later in the evening, Malay encouraged the board to begin discussing a formal policy for graduation regalia, and said he plans to release a community survey in the fall to gather public input on the issue.

Malay noted that, though he ultimately overturned Logan’s decision not to allow the sashes, he doesn’t necessarily disagree with the principal’s view.

“Mr. Logan shared his perspective on it, and both of them are right. Neither one of them are wrong,” Malay said of Logan and Davis. “That’s the difficult part about this, is that you’ve got very compelling positions on both sides of that conversation.”

George Downing, chairman of the board, said he will direct the board’s policy committee to take up the issue in the fall.

“It goes beyond just the sash question. There’s an awful lot of questions involved — a lot of ambiguity in how we do things right now,” Downing said.

Keene High’s graduation ceremony is set for Friday at 6 p.m. on Alumni Field.