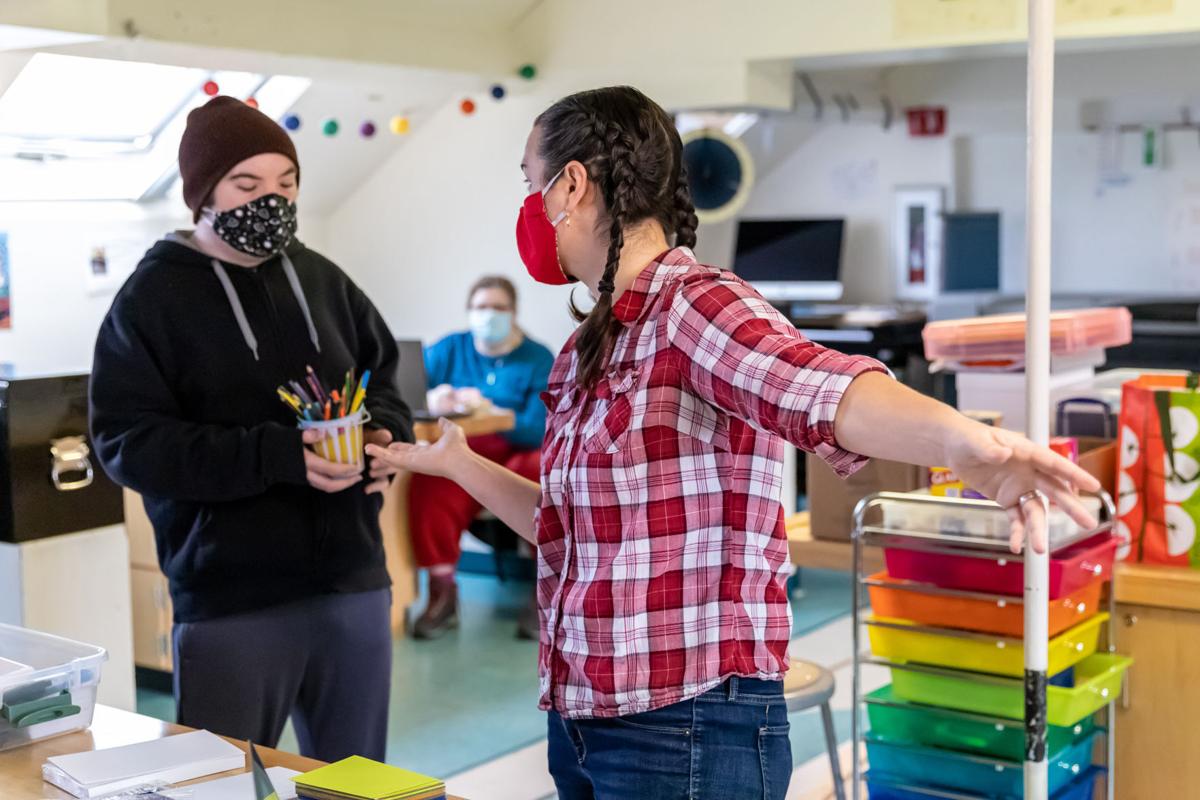 explains a card-making project to student James O’Reilly in this file photo from November 2020. 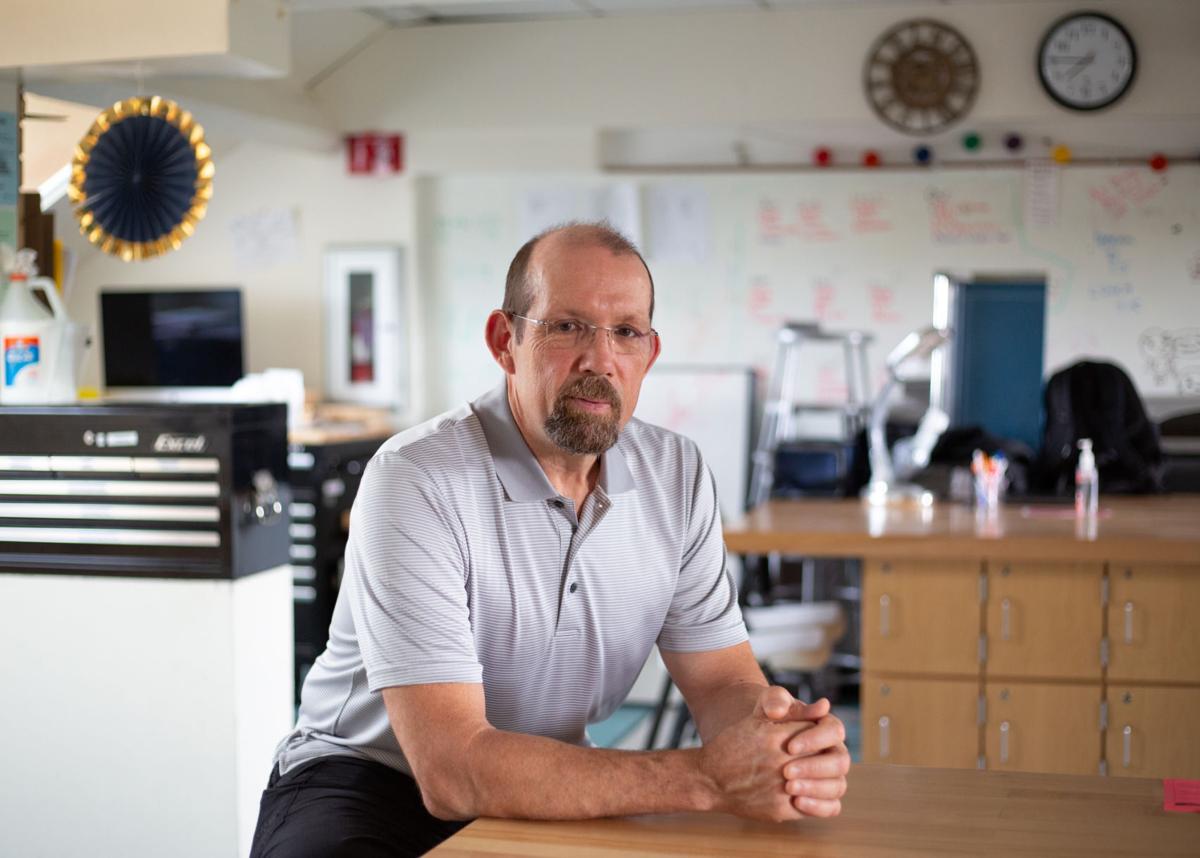 “I think it’s hopeful. I think it’s promising,” Executive Director Chris O’Reilly said of Making Community Connections’ financial outlook. “We have basically stabilized our enrollment at around 50 students. We have the utmost confidence that we will increase enrollment over the next year. Our model is well known in the area, it’s established.”

explains a card-making project to student James O’Reilly in this file photo from November 2020.

“I think it’s hopeful. I think it’s promising,” Executive Director Chris O’Reilly said of Making Community Connections’ financial outlook. “We have basically stabilized our enrollment at around 50 students. We have the utmost confidence that we will increase enrollment over the next year. Our model is well known in the area, it’s established.”

After Making Community Connections’ decision this past spring to consolidate its two campuses, the public charter school’s top administrator says he’s optimistic about the future of the Keene site.

“I think it’s hopeful. I think it’s promising,” Executive Director Chris O’Reilly said of the school’s financial outlook. “We have basically stabilized our enrollment at around 50 students. We have the utmost confidence that we will increase enrollment over the next year. Our model is well known in the area, it’s established.”

The school, which is also known as MC2 (pronounced “em-cee-squared,” like Einstein’s energy-mass formula), began as part of the Monadnock Regional School District in 2002 and ran through 2010. MC2 established its Manchester campus as a public charter school in 2012, and the Keene site opened in 2015 in the Center at Colony Mill (formerly known as the Center at Keene).

MC2’s board of trustees decided in April to close the Manchester campus, but maintain the location in Keene, though O’Reilly said Thursday that the school is looking to move to a different Elm City space.

“There was a decline in enrollment both in Manchester and Keene, with the majority of the decline being in Manchester,” O’Reilly said. Board member Amanda McLellan told The Sentinel in April that the Manchester campus had 38 high-school students and seven staff members, compared to roughly 50 students and 11 staff in Keene.

With the decision to consolidate the two campuses, the board also eliminated the position of chief education officer, and named O’Reilly MC2’s executive director. The position, he said, is roughly equivalent to superintendent of a public school district, overseeing various administrative responsibilities. He’ll also remain the school leader in Keene, a role that is similar to a principal.

The most immediate of these priorities, MC2’s reopening plan, is well underway, O’Reilly said. The school on Wednesday released a draft plan, and is seeking staff, student and family input. O’Reilly said he will use this feedback to fine-tune the plan before presenting it to the board at its July 19 meeting.

“It’s not terribly different than the plan that we had during COVID,” he said. “We still maintain distancing, we still are following all the protocols recommended by the Department of Health and Human Services, by the CDC. Masking is the big question.”

School officials will continue to monitor COVID-19 transmission rates in the area before making a final decision on when to require masks in school settings, O’Reilly said. The draft plan calls for students and staff to wear masks whenever they cannot maintain physical distancing.

O’Reilly added that MC2 intends to return to fully in-person classes at the start of the new academic year. The school offered a hybrid model for most of last year, but ended the term fully in-person, which public schools statewide also did at Gov. Chris Sununu’s order.

And as MC2 continues to seek public input on its reopening plan, O’Reilly said the school has also been working with families, staff and students to determine how best to spend the roughly $1 million it has received through several rounds of federal COVID-relief packages.

Based on this feedback, MC2 has already developed a number of plans for this money, including additional outdoor programs, the creation of a new part-time family liaison position to assist families with academic and social-emotional needs, mental health supports for students and staff members and an afterschool academic support program to help students who fell behind during the pandemic.

The school also hopes to expand its makerspace, which students use for a variety of hands-on lessons and projects. Several groups of students have used the space to launch their own businesses, including one that sells handmade wooden pens, and another that offers greeting cards and other stationery, O’Reilly said.

“And our intention was to build this makerspace out, to actually share it with the community. So, maybe rent some space to people who wanted to come in in the evenings or weekends to use the equipment for their own personal use, such as many of the makerspaces do across the country,” he said. “… So that is still our hope, to do that.”

This vision of the makerspace should be more attainable if MC2 moves to a new location, which O’Reilly said the school is in the process of doing.

“We’re negotiating terms for a new space in Keene that we intend to move into in the next school year,” he said, adding that the new location would also reduce overhead costs for the school, and give it enough room to hopefully grow to its target enrollment of up to 120. (He declined to say where in Keene the new space is.)

MC2 is also in the process of re-launching its internship program, which is mandatory for students in each of the four “phases” they complete to graduate. The program paused during the pandemic, but students in the past have interned at local businesses including the Hannah Grimes Center for Entrepreneurship, Keene Day Care Center and Toadstool Bookshop.

“The primary task at hand is to re-launch everything, to get back to where we were,” O’Reilly said. “But my hope is that in the process, we’re able to make even more connections in the community to expand our internship sites so we can get more of our students out.”

This level of community engagement, he added, remains central to MC2’s mission.