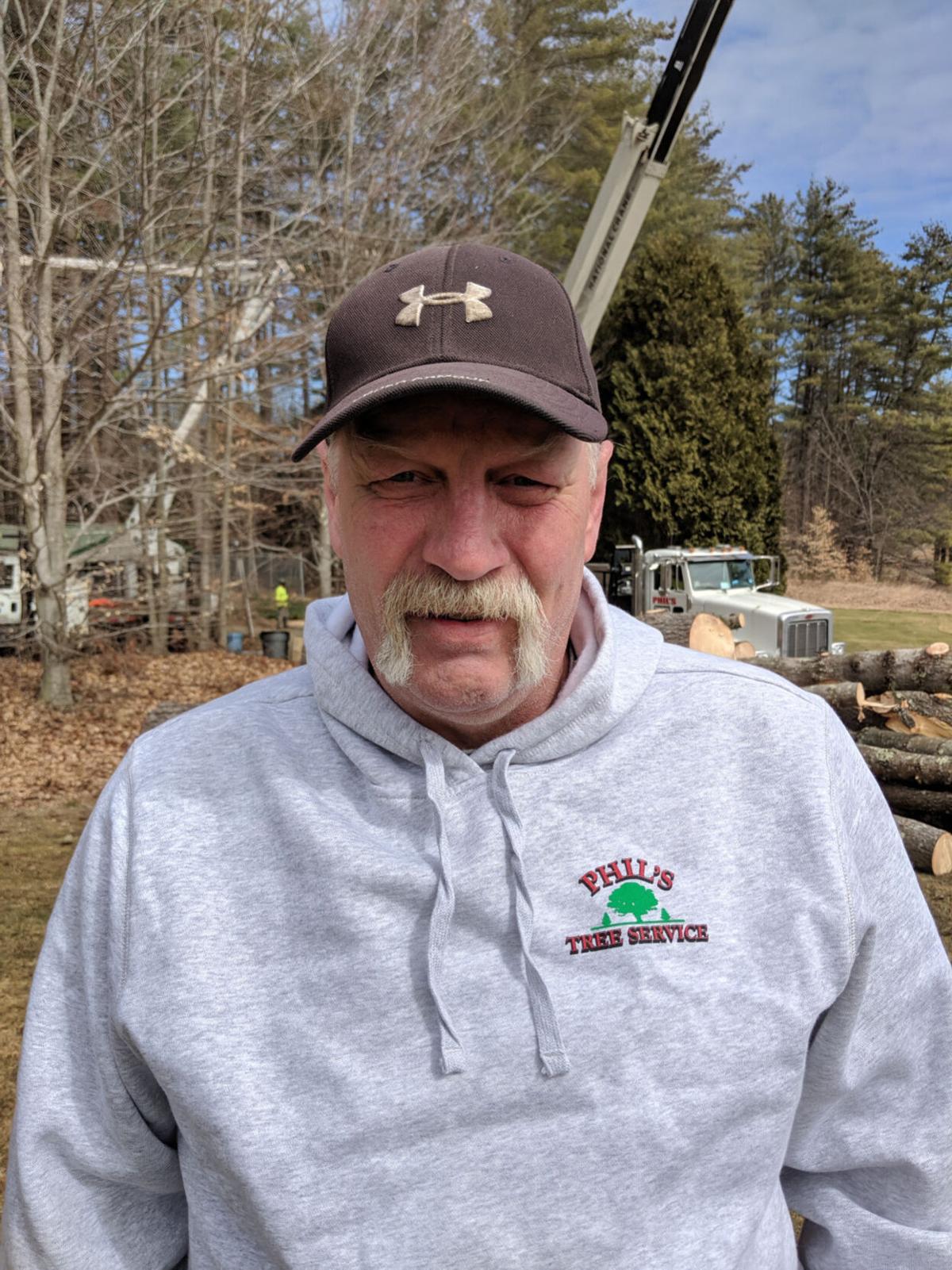 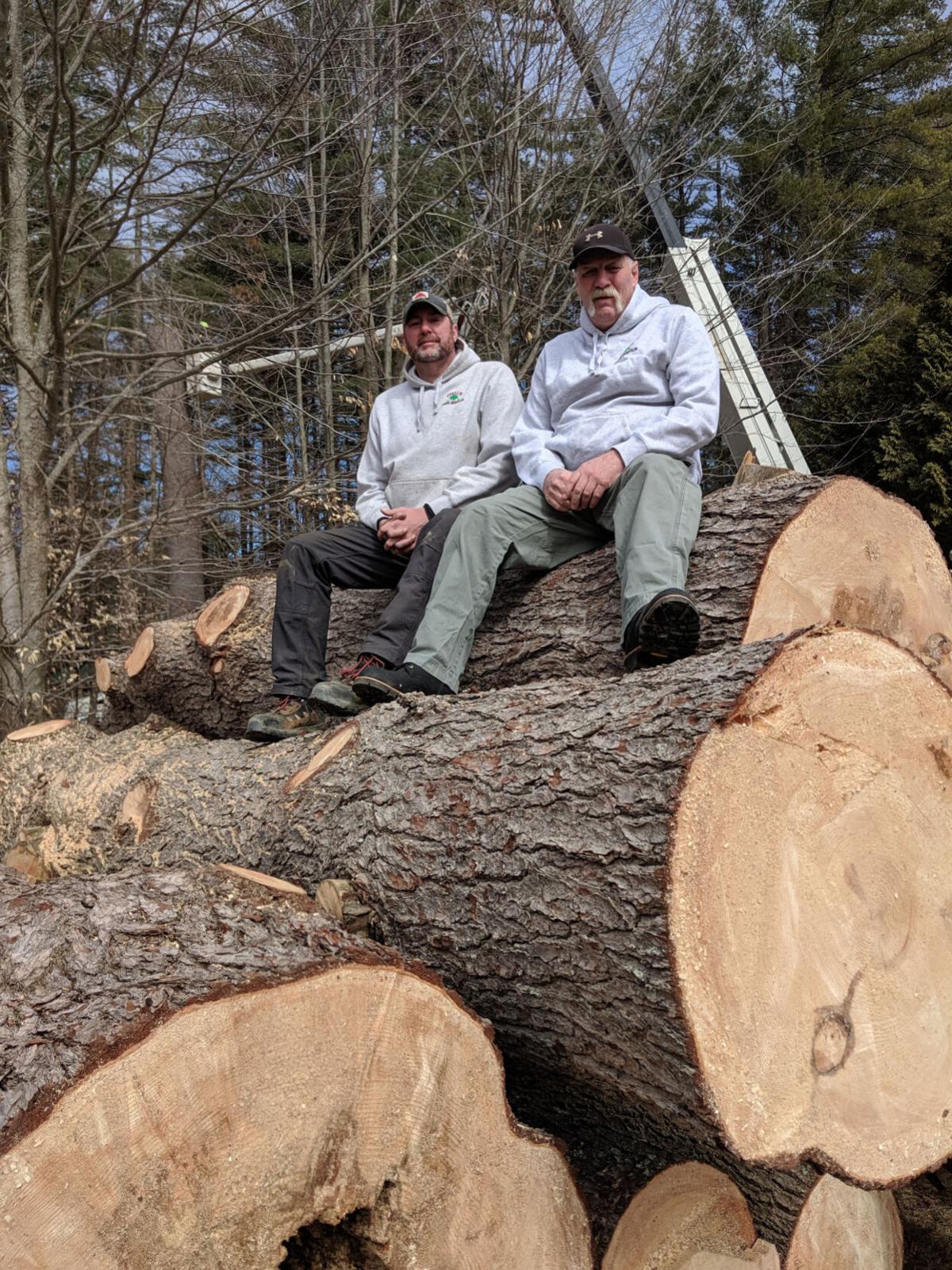 The high-pitch whine of chainsaws and raspy clatter of woodchippers emanate from a stand of tall white pines off the first fairway at the Keene Country Club. A huge section of tree trunk weighing nearly two tons sways slightly about 50 feet in the air, tethered to a crane cable.

Phil Davis, a Keene native who estimates he has felled hundreds of thousands of trees in this region over the years, walks toward the worksite, accompanied by Jon Driscoll, who purchased Davis’ company, Phil’s Tree Service, last October.

It’s a big job, Driscoll, 43, of Harrisville, says, requiring a team of nine men and more than $1 million in equipment. He quips that maybe thousands of misguided golf balls — including some of his own — have hit those trees.

Then Davis speaks, in the authoritative tone of someone who knows his business well.

“It’s a good day to cut. The ground is still solid; it hasn’t turned to mud yet, and there’s no wind to fight. And it’s not too cold out, makes it easier to work.”

Although Davis, 55, isn’t officially employed by the company anymore, Driscoll often seeks his advice on tricky jobs such as this one. They’re good friends, and Davis is more than happy to impart the wisdom of his experience on the company’s new owner.

“He knows everything about the business,” Driscoll says. “I check with Butch (Davis’ nickname) about a lot of things. He’s seen it all.”

The two burly and muscular men walk around and survey the site, conferring with some of the crewmen about the status of the job, raising their voices to be heard above the din. A half-dozen other trees are scheduled to be felled, followed by a dozen over in a nearby stand. The country club wanted them removed because they threatened the row of sheds that house the club’s golf carts, Driscoll says.

“See that one over there?” Davis asks, pointing in the direction of a fallen tree off to itself on the fairway. “That came down in the wind the other night. You wouldn’t know it by looking at it, but it was rotted throughout.”

Davis has been around the tree-felling business since he was a teenager. He learned the trade by working with his father, also named Phil, who was crushed to death on April 23, 1988, when a tree he was scaling broke apart underneath him at a work site at Felt and Wildwood roads in West Keene. Davis saw it happen.

“Nothing scared the guy,” Davis says of his father. “It was a freak accident. You never get over that; that’s a trauma you have to deal with.”

His father’s full-time job was with the Keene Fire Department, and rescuers who rushed to the accident scene were members of his dad’s own shift.

“They were traumatized as well. Everyone was,” Davis says.

“My dad had taken the day off to play softball; we were just finishing up on a job. I was doing some cleanup work when it happened.”

Despite the horror of the accident, Davis stayed with the profession, starting his own company shortly after his father’s death. The modest operation consisted of a pick-up truck, ropes and several chainsaws.

“It was just me in the beginning,” he says, “slow at first, and I built it up customer by customer. I never advertised; business came from word of mouth. As time went by, I bought more equipment and hired more people.”

Although he did some clear-cutting, as it is known when timber is cut out in the open forests, most of the jobs that came to him consisted of removing trees at residential and commercial sites, or being hired by area municipalities, where work has to be more precise and painstaking to prevent trees falling onto structures. Unlike what some may assume, trees are not simply cut at the bottom and allowed to fall, but “deconstructed” from the top and cut in sections that are then lowered to the ground.

The work is highly dangerous, too, as he knows so clearly given how his father died. Logging and tree-cutting is the most perilous job in the United States, with an accident rate 33 times the average job nationwide, and 111 deaths annually per 100,000 workers, according to the U.S. Bureau of Labor Statistics.

A conversation with Davis, who has a hail-fellow-well-met demeanor, is a fascinating tutorial on the complexities of cutting trees.

“You have to carefully study the scene beforehand; you have to know where you want the tree to go down, where exactly the crane needs to be,” he says, comparing the operation to the choreographed movement of ballet.

Once the operation begins, there is no room for error, he says. Everyone on the crew must know where they are to be at all times, and the crane operator keeps everyone’s movements in view. One recent innovation is the placement of microphones and headphones inside helmets, giving crews the ability to readily communicate with one another. In the old days, they relied on shouting above the noise.

There are several other important components to doing the job correctly, Davis stressed. One is to ensure the team members work smoothly together. “There’s a chemistry that needs to be there.”

Secondly, Davis says, timber work is extremely taxing both physically and mentally, and you have to watch for fatigue in the crews. “Tired guys make mistakes,” Davis says. Hot weather is more taxing on crew members than cold, he notes.

Thirdly, it’s important to never overload the crane, and for everyone to always pay attention to the movement of that piece of equipment. Once, while working in a cemetery years ago, Davis, who was on the ground, saw the crane start to tip over, and raced out of harm’s way at the last second when it fell. It was the closest call he’s ever experienced in the business.

A couple of years ago, Davis felt some discomfort in his chest and went to the hospital, where two stents were implanted in the blood vessels to his heart. At the time, he attributed it to the stress and hard work involved in his business, requiring sometimes as many as 100 hours a week. He readily admits he’s always been a workaholic.

So he throttled back, relying more on his crews. However, in June of last year, he suffered a massive heart attack while at home, requiring emergency triple bypass surgery and a valve replacement at Dartmouth-Hitchcock in Lebanon.

After that, he knew it was time to put the work behind him and sell the company. Driscoll was eager to take over.

“Phil has created a huge clientele, and he’s loyal as the day is long,” Driscoll says.

Davis also gave up his 35-year association with the Keene Fire Department as a “call company” member, part of an auxiliary unit used when extra personnel is needed. When summoned, these firefighters head to the scene on their own.

“Firefighting is a young man’s game,” he says.

Davis grew up on Rule Street in Keene, part of a family with deep local roots that originally settled the old Davis Farm in Roxbury. He attended Roosevelt Elementary School, then Jonathan Daniels School, then on to the old middle school downtown before graduating from Keene High School.

He met his wife, Steffany, while on a snowmobile outing, and their eldest son, Philip III, is an example that the apple doesn’t fall far from the tree — he is the owner of Phil’s Tree Service Seacoast in Lee. Their second son, Lincoln, is a senior at Keene High School, and their daughter Paige, a freshman there.

Davis says he misses his employees and the camaraderie that comes from working in a taxing and risky field. But he doesn’t miss the hard work of climbing and cutting or the hassles of running a business, with its high overhead expenses.

And Davis has a new avocation that occupies his time, as a day-trader, having exchanged his chainsaws for three computer monitors he watches, tracking his buying and selling of stocks.

“I’m not doing so bad at it, either,” he says of his new occupation. “It’s a lot different than what I used to do, but it’s also a lot warmer working inside.”

At a glance: Phil Davis