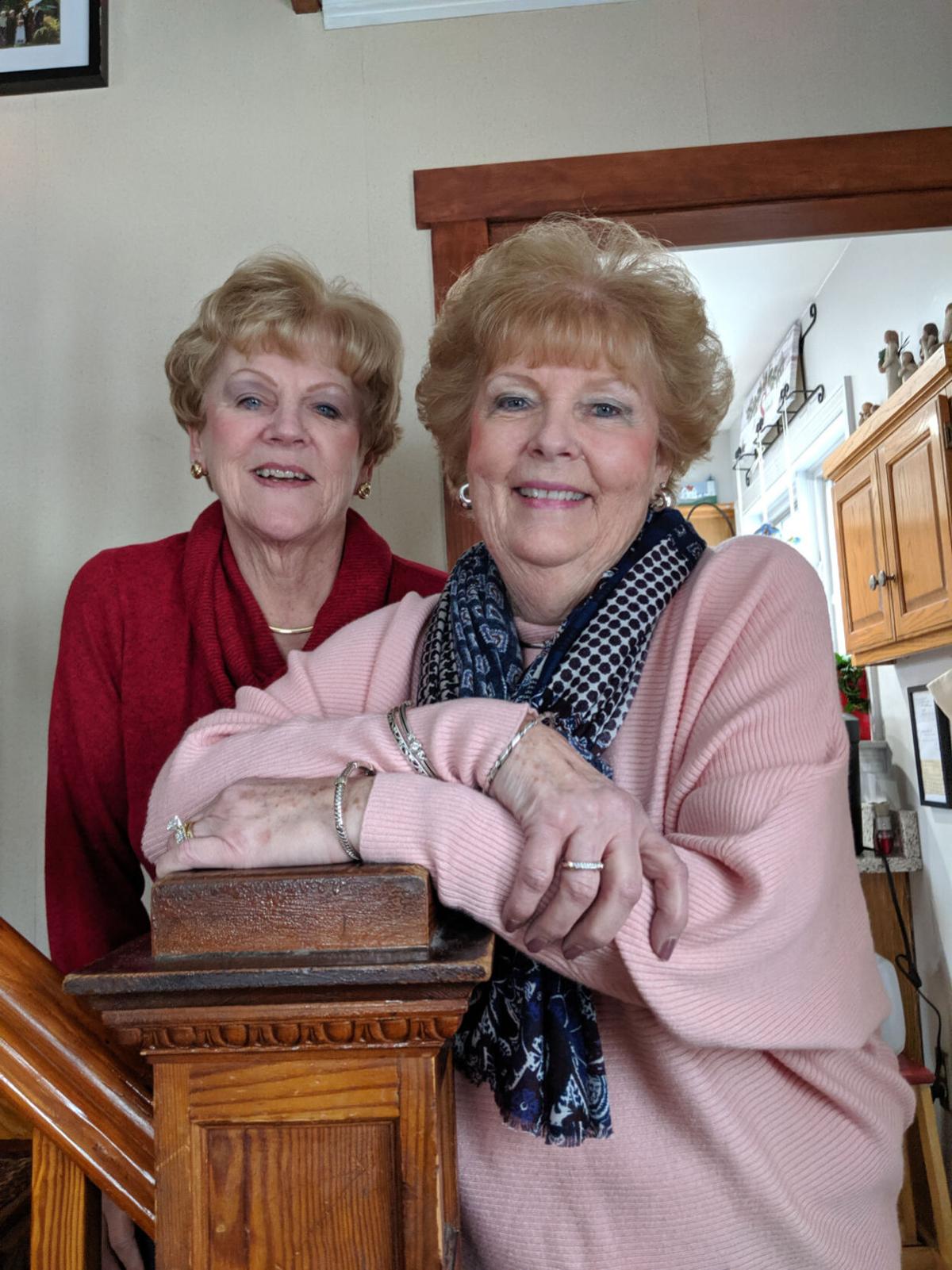 Carolyn Szoc, left, and Marilee Tilton, at Szoc’s home in Keene. “A lot of people thought we were sisters,” said Tilton of their decades as stylists and business partners. 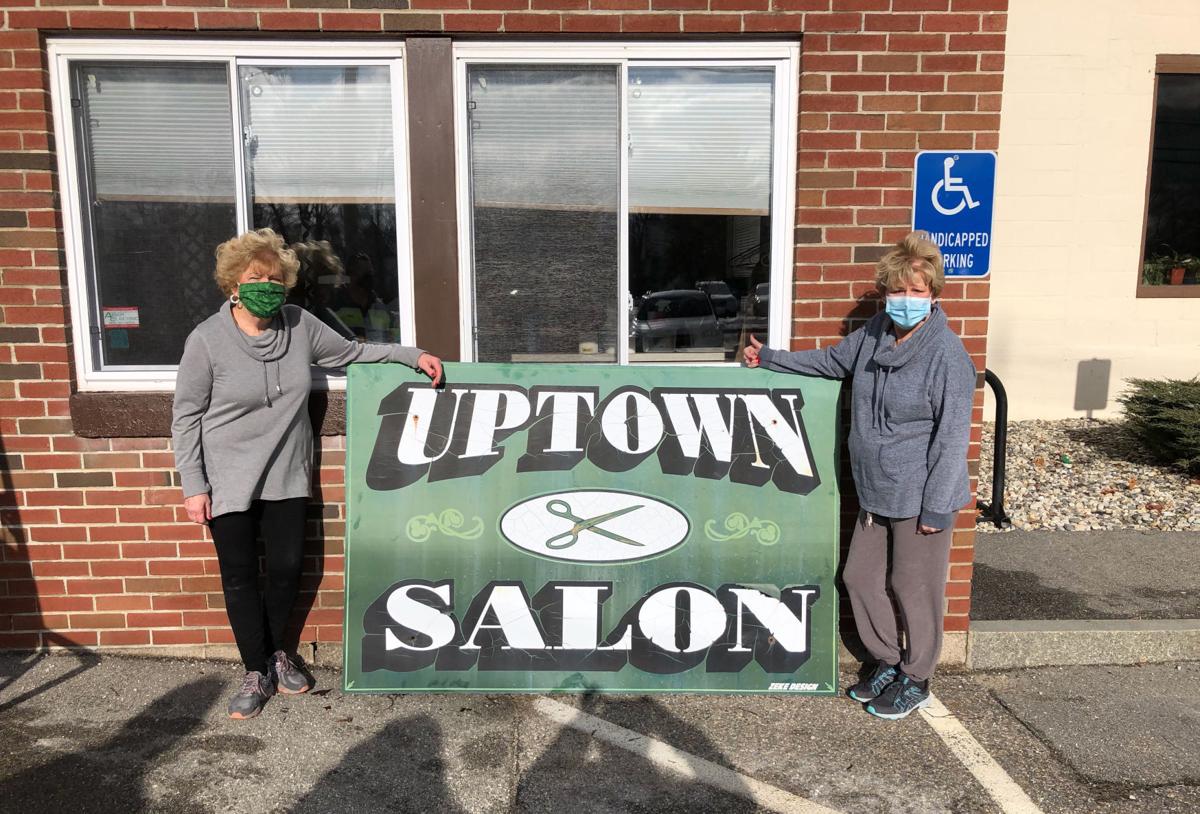 Marilee Tilton, left, and Carolyn Szoc outside the Keene beauty salon they ran together, on the day this winter its sign was taken down.

Carolyn Szoc, left, and Marilee Tilton, at Szoc’s home in Keene. “A lot of people thought we were sisters,” said Tilton of their decades as stylists and business partners.

Marilee Tilton, left, and Carolyn Szoc outside the Keene beauty salon they ran together, on the day this winter its sign was taken down.

This past Christmas Eve, Carolyn Szoc and Marilee Tilton surveyed the empty rooms of what had been their beauty shop, Uptown Salon on Emerald Street in Keene. They were ending a half-century each as beauticians, almost all of those years working side by side.

What had been a place overflowing with activity and conversation just a couple weeks before — the constant buzzing of blow dryers and clippers — was now silent. Their voices echoed off the walls, they said. The equipment had been sold, and the green, rectangular sign out front was to come down in a couple of days.

“We could write a book about what happened in that beauty salon over the years,” Tilton, 69, of Westmoreland, said in a recent interview of the two together.

“It was a good business. It was a fun business,” Szoc, 70 and a Keene resident, said.

The two reflected on the many years spent working together.

“A lot of people thought we were sisters,” said Tilton, who first met Szoc when they were new hairdressers working for Beatrice Legere of Keene in 1970. Both are New Hampshire natives, Tilton born and raised in Lancaster, Szoc from Charlestown.

“And, we’re best friends,” Szoc said. “Our husbands are friends; our kids are all friends. We even take vacations together.” It’s not unusual for phone calls between the women to last an hour or two.

Mistaking them for siblings is easy, as they look alike, both with blue eyes and radiant hair done in similar styles. As is typical of very close friends, they often finish each other’s sentences and look at each other with knowing glances, communicating in a nonverbal way. The biggest recognizable difference between the two during the interview is Tilton is right-handed, Szoc left.

The women both came to Keene the same year — 1970 — to work at separate beauty salons owned by Legere, and were introduced to one another at a company Christmas party. They became fast friends and met and married men from Keene.

In 1974, Legere consolidated into one salon, on Water Street, and the two women then worked side by side.

“I had a child, and Carolyn became pregnant, and eventually we babysat for one another, and we had a play group together,” Tilton said.

In 1984, Legere closed her salon, and the two went to work for eight years at Charlotte’s Beauty Parlor on Washington Street.

“In 1992, we decided we could do this ourselves as partners,” Tilton said.

They applied for a business loan but quickly discovered banks at that time discriminated against women who wanted to start their own businesses.

“They wanted our husbands there to co-sign for the loan,” Szoc said. “We didn’t want to do that. Then they kept nit-picking at us, asking us for this, then that; it was clear they weren’t going to loan money to women.”

So, the two put up equal amounts of their own money and found a storefront to rent on Emerald Street.

“We decided to divide everything up evenly. We paid each other the same amount, and when one was busy with customers, the other would either clean up or do the books. We never changed those rules,” Tilton said.

Because they had already worked as stylists, they had a ready-made clientele.

“We did well,” Szoc said, and the salon eventually expanded to four hairdressers.

“We did the hair for men and women, entire families, some for four generations,” Tilton said. “One client of mine was with me for 48 years.”

Surprisingly, among their thousands of customers over the decades, they could come up with only two who were unpleasant and disagreeable.

“I didn’t have any problem with people who are fussy about their hair,” Tilton said, adding with a laugh, “although there are some scars on my tongue from where I had to bite it to keep quiet.”

“Really, 99.9 percent of the customers were great,” Szoc said, adding that many of them became friends.

Tilton agreed, noting that what she learned in all her years as a beautician is that people are basically kind and generous.

“You look at the news, and it’s a barrage of bad things, but I still think that there are more good people than bad,” Tilton said. “I have hope. If you need help at a given moment, there is always someone there.”

Both said the role of hairdresser often involved providing a sympathetic ear to their clients’ personal issues.

“People confided in us. Sometimes we felt like we were psychologists. You get close to people. You can feel when they’re depressed or sad, or going through tough times,” Tilton said.

Once, the two were hired for temporary jobs on the manufacturing line at the old Kingsbury plant in Keene because that company had experienced a significant hike in orders. They thought it would be an interesting diversion while they continued to style hair.

They learned something from that experience.

“You think women gossip?” Szoc asked. “Well, we found out working at Kingsbury that men gossip a lot more than women ever do.”

Szoc and Tilton maintained an arduous schedule as beauticians, with three consecutive days a week of 12-hour shifts in which they would book as many as a dozen appointments. The other days were eight-hour shifts. Each year, they’d take two weeks’ vacation, both couples — Szoc and her husband, Paul, and Tilton and her husband, Brian — traveling together to their favorite spot in the Caribbean: St. Martin. Occasionally they would go on cruises.

Often, they’d begin their workday at 6 a.m., starting with a 2½-mile walk together, getting coffee along the way.

It was a hard decision to retire, both of them said, but the COVID-19 pandemic played its part.

“That rushed it along,” Szoc said.

The salon was closed in mid-March last year on orders from the governor, and didn’t reopen until mid-May.

“I have to say, in the 50 years of working as a beautician, this year of COVID was the most stressful,” Tilton said.

By December, the two decided to call it quits.

Then, two weeks after they closed, in early January, both couples came down with COVID-19.

“I felt blah and came down with a fever,” Szoc said, and she and her husband — who has multiple myeloma, weakening his immune system — tested positive for the virus. Fortunately, both were able to avoid hospitalizations.

At the same time, Tilton and her husband also became sick, she suffering from a high fever and he experiencing such dire breathing difficulty that he was at Cheshire Medical Center in Keene for five days. Then she came down with breathing problems, too, that sent her to the emergency room.

As if that weren’t bad enough, Brian Tilton suffered a heart attack a couple days after his hospital discharge, requiring an emergency airlift from Keene to Dartmouth-Hitchcock in Lebanon.

“It’s been rough for us,” Tilton said.

Still, she and Szoc say they much appreciate some of the benefits of retirement, first among them having the time to do what they wish, which in both of their cases involves much knitting, crocheting and cross-stitching. And, they maintain their close friendship, visiting nearly every day either by phone or in person.

“We’re both very active people, so we have to keep busy,” Szoc said.

And, once the pandemic winds down, they’re anticipating another vacation in St. Martin.

At a glance: Carolyn Szoc

At a glance: Marilee Tilton