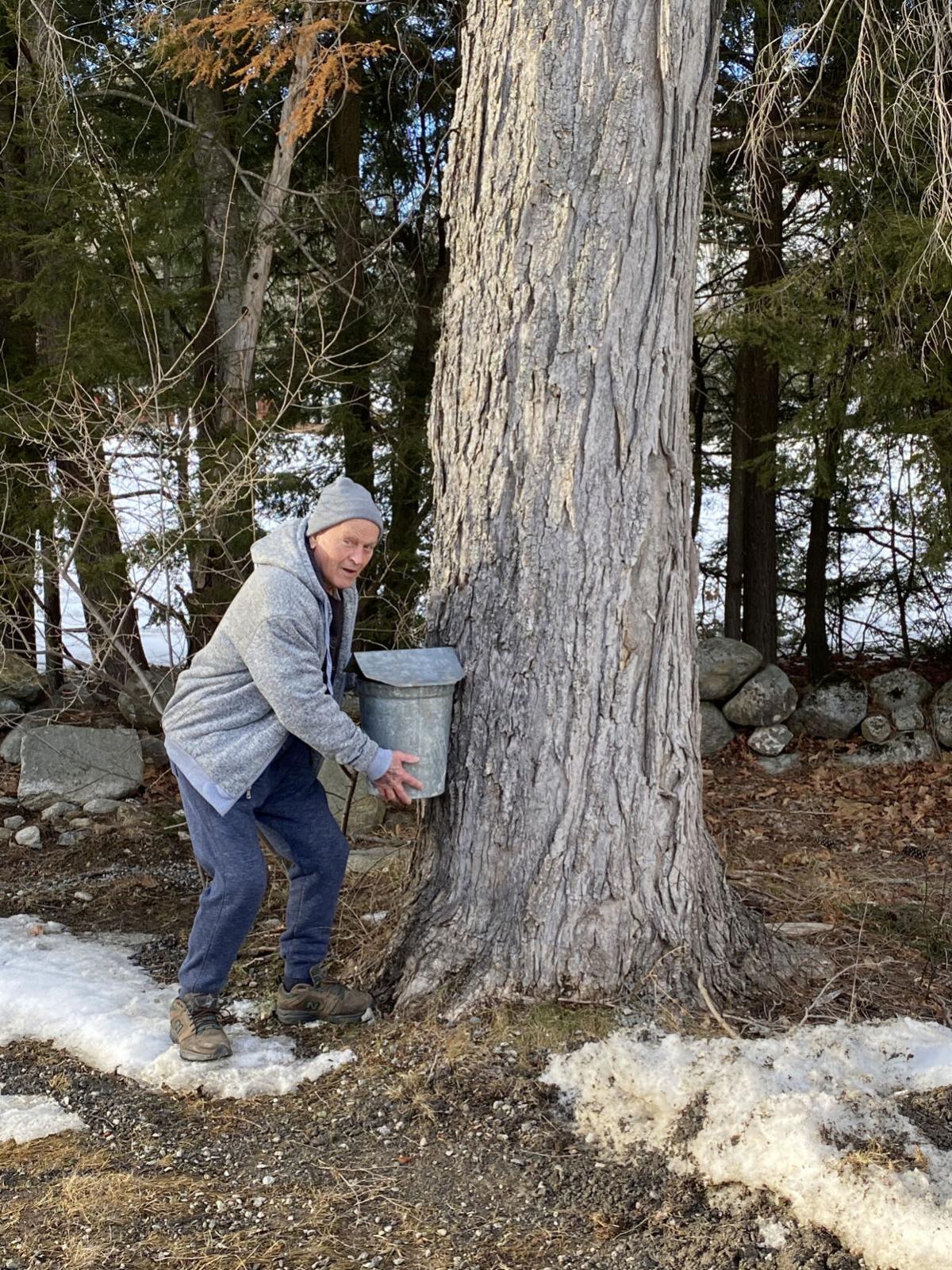 Peter Barrett, shown here beside a tap in the woods of Keene, has memories of tapping trees as a teenager with his father, Evans, and making maple syrup at their farm's sugarhouse. 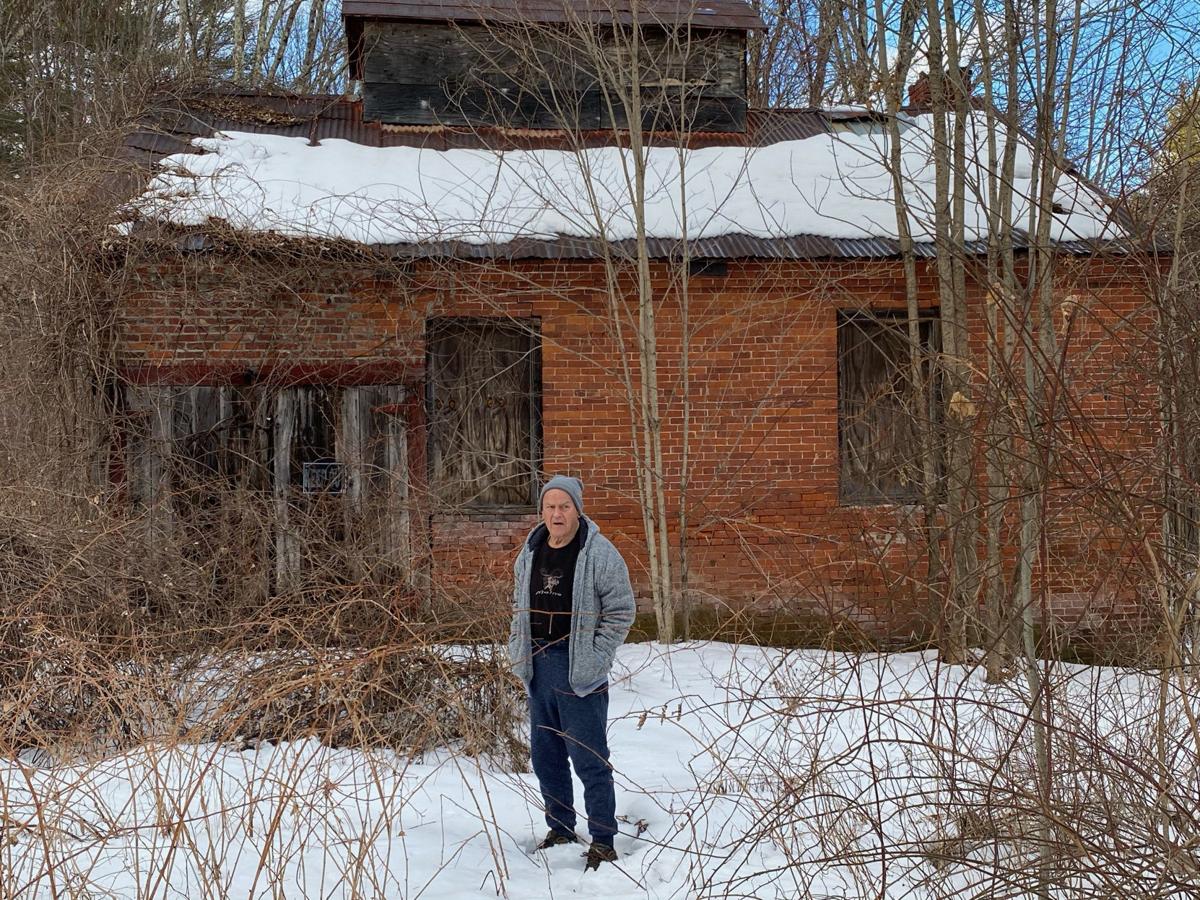 Peter Barrett stands next to what had been the sugarhouse at his family's farm in Keene. The structure was initially a one-room schoolhouse.

Peter Barrett, shown here beside a tap in the woods of Keene, has memories of tapping trees as a teenager with his father, Evans, and making maple syrup at their farm's sugarhouse.

Peter Barrett stands next to what had been the sugarhouse at his family's farm in Keene. The structure was initially a one-room schoolhouse.

Like many people this past year, Peter Barrett has been spending nearly every day at home.

The toll of leukemia, with which he was diagnosed in the fall, coupled with the COVID-19 pandemic, has limited the Keene native’s activities. Reading, watching TV and playing cribbage with his wife, Willy, fill up most of his time.

But the one thing Barrett, 79, really wants to do again is one of his favorite childhood pastimes — maple sugaring. He used to tap trees with his father as a teen, and the pair would then make maple syrup in their farm’s sugarhouse.

With his cancer diagnosis, Barrett can’t go into the woods by himself in case something happens. But his doctor did clear him to tap, as long as he has someone with him.

And though he hasn’t gone sugaring in years, Barrett swore that, as long as he felt up to it and could find a friend to tag along, he’d find a way to tap again this season.

He was first diagnosed last year with myelodysplastic syndrome — when the body no longer makes enough healthy blood cells — and after a few rounds of chemotherapy, he was getting better.

“But then, when we went on to the fourth set of chemo, it wasn’t helping,” he said.

Barrett was referred to Dartmouth-Hitchcock Medical Center in Lebanon for a second opinion, and learned in October that he had leukemia.

“It’s not easy,” his wife, Willy, said. “I wouldn’t think it would be easy on anybody, [with] the not knowing, and our kids having to go through it.”

Willy said she used to boil the sap in the sugarhouse, but never actually went out to collect it with her husband. One of his old friends will take him instead.

“I really didn’t want him to go off sugaring,” she admitted, “but everybody said, ‘Let him do it.’ ”

A legacy of farming

Before his diagnosis, Barrett joked, he had never taken a sick day.

Born into a family of farmers, he was used to the long hours and grueling work needed to keep their dairy operation in West Keene running.

“Even if I was sick, I still had to go to work,” he said. But “I think I am one of the luckiest men alive that I just loved what I was doing, and I never had a day where I hated to go to work.”

Barrett Farm was started by his grandfather, Henry, more than 100 years ago. The farm was taken over by his father, Evans, and then by Barrett, who ran it for 45 years.

“Growing up on a farm in my time — back when kids used to work a little bit and perhaps didn’t sit and play games on the computer all the time — was fun,” Barrett recalled. “I had to work, I had to help, but I got money — enough to buy my own car.”

His grandfather started out with 15 cows, Barrett said, and his father built up the livestock to 130 cattle.

The 500-acre operation was renamed Stoneholm Farm in the 1980s because of the stone farmhouse that sits prominently on the property at the intersection of Maple Avenue and Summit Road, across from the Keene Family YMCA.

Barrett’s son, Michael, took over in the 1990s, and they moved the family farm to Putney, Vt., in 1997, after the city of Keene recommended more than 50 acres of the farm property be rezoned to accommodate a corporate park development.

In recent years, with the price of milk so low, margins were thin, and Barrett — who received a bachelor’s in dairy science from the University of New Hampshire — said the family had to start borrowing money to pay the bills.

Between 1992 and 2012, the country lost more than 250,000 midsize and small commercial farms, according to the U.S. Department of Agriculture. During that same period, The Washington Post reported, more than 35,000 very large farms started up, and some of the large farms already in existence consolidated their acreage.

Another family offered to buy the Putney farm in 2018, and the Barretts accepted.

“We had some meetings with consultants and decided, before we burned up all of our equity, we’d sell out,” Barrett said. “So we sold everything.”

Barrett and Willy, who’ve been married for 54 years, moved back to Keene afterward, while Michael moved to Santa Ana, Calif., with his wife to be closer to her family.

The original farm’s sugarhouse, which was initially a one-room schoolhouse, still sits on the property in West Keene, according to Barrett. The stone home and some of the nearby property is now owned by C&S Wholesale Grocers.

And while he no longer has his own sugarhouse, Barrett said he still looks forward to tapping trees this season and bringing the sap to local sugarers.

The start of the season varies, he said, with spring-like weather emerging earlier in recent years. But typically, March 1 would be the first day to tap.

Prime conditions are 30 to 40 degrees at night, and 40 to 50 degrees during the day, so the sap drips easily from the maple trees, he said. Trees with southwest exposure are his personal favorite, he added, because the early morning sun warms them up.

But regardless of when the season starts or how much sap he collects, Barrett said he’s just looking forward to getting out of the house for something other than a doctor’s appointment.

At a glance: Peter Barrett