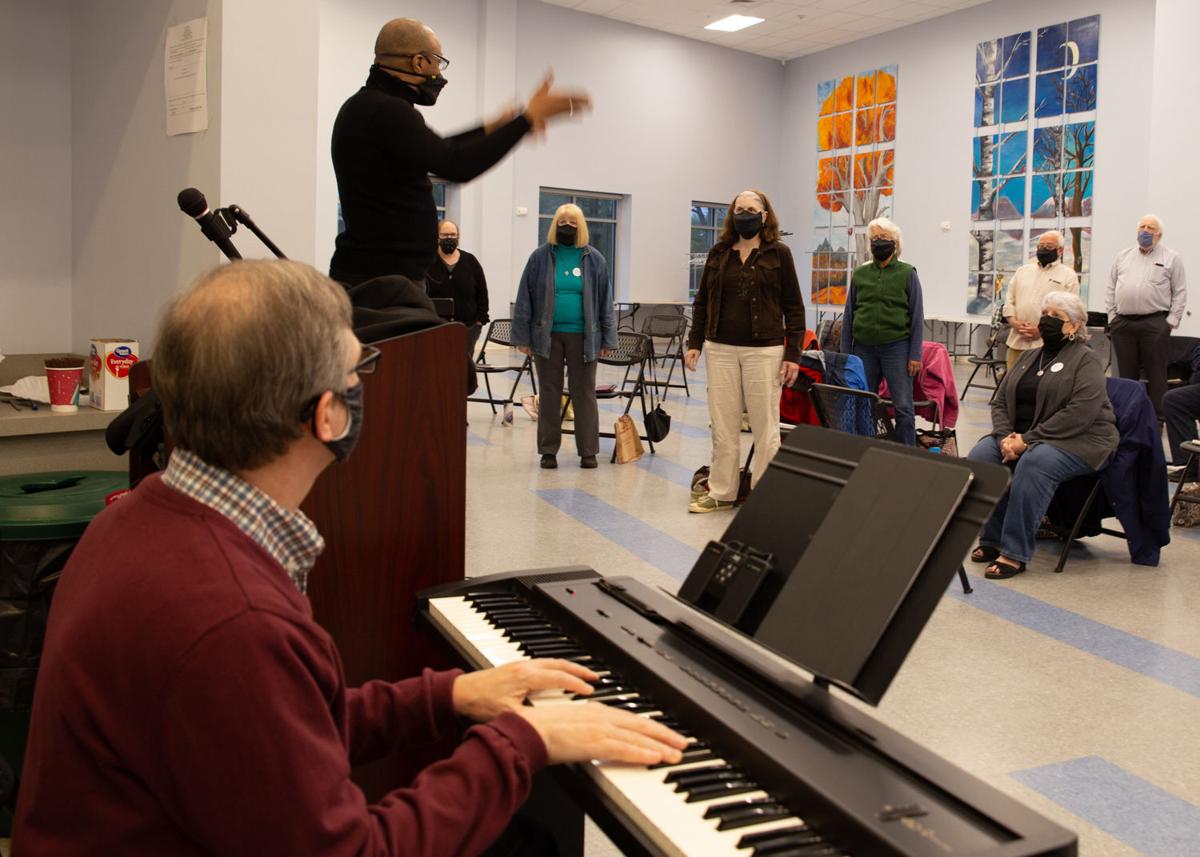 Vladimir Odinokikh accompanies the Keene Chorale as members rehearse for a concert at Keene Ice, in this file photo from last month. The choir’s music director is Cailin Marcel Manson.

As a child, Vladimir Odinokikh said he often infuriated his neighbors in Moscow, where the tight urban quarters kept them from escaping the sound of his regular piano rehearsals.

Now living on a wooded property in Richmond, Odinokikh, 62, a piano instructor and accompanist for several area choirs, said he no longer has that problem.

“I have seven acres,” he said. “I can play piano during the night.”

Born outside of Moscow, Odinokikh lived as a young child in East Germany with his parents and older sister, Nadezhda. It was there, at age 4, that he began learning the piano because Nadezhda had started taking lessons.

His parents supported his early interest in the instrument, he said, and when the family moved to Moscow two years later, they enrolled him in a school for gifted young musicians. The atmosphere there was cutthroat, according to Odinokikh, who estimates that he slept only five hours a night because he had to practice so frequently.

“It was very intense,” he said. “It was a lot of competition because they eliminated people each year.”

While stressful, the education was of high quality, Odinokikh said. He excelled among his peers and gained entrance to the eminent Moscow Tchaikovsky Conservatory, which counts composer Sergei Rachmaninoff among its alumni. From there, he got bachelor’s and master’s degrees from the Gnesin State Musical College in Moscow, now the Gnesin Russian Academy of Music.

Odinokikh earned professional acclaim as a soloist and a chamber musician in Soviet Russia, performing with well-known vocalists and orchestras, including the Moscow Philharmonic. As the communist government provided generous support to top classical artists, Odinokikh said state officials helped fund his career domestically and abroad, especially after he won competitions in Russia, Peru and England.

“They were very strict about who they allowed to travel internationally to perform and compete,” he says in a biography on his personal website. “The only way for a big career was to win the competitions.”

But the government also limited musicians’ free expression, according to Odinokikh, who said those restrictions kept composers from producing work that might be critical of the state. He was confined largely to playing older works by composers like Mozart and Chopin, he said.

Odinokikh said financial support for the arts ended when the communist government collapsed in the early 1990s. He moved to Mexico City shortly thereafter, where he performed and taught piano for several years.

A friend living in the Monadnock Region invited him to join the Keene Institute of Music and Related Arts, a now-defunct local conservatory, which Odinokikh did in 1998 after obtaining permanent residency status in the U.S.

“When I was young, I always wanted to immigrate to the United States,” he said. “Of course, it was impossible, but I always thought about it.”

But making the switch to American life wasn’t easy, Odinokikh said. Shy by nature, he spoke very little English, and without an agent, struggled to find opportunities to perform. A year after moving to Keene, he went back to Mexico.

Since returning to the area in 2001, though, Odinokikh has become active in the local classical music scene, largely setting aside his solo career for work accompanying choir groups and teaching young students.

He resumed his instructional role at the Keene Institute of Music and Related Arts until it closed in 2006, according to past reporting by The Sentinel, and also began playing at the Unitarian Universalist Church on Washington Street. Working at the church — which he continued until several years ago — offered Odinokikh a break from his usual classical repertoire, he said.

“It allowed me to play music of completely different genres,” he said.

Odinokikh prefers to keep the details of his personal life to himself, declining to answer a Sentinel reporter’s questions about his family in Russia and whether he has any family locally.

Professionally, however, Odinokikh’s impact on the Monadnock Region is as clear as it is substantial. He teaches piano at Franklin Pierce University in Rindge and also serves as staff pianist in the Music Department at Keene State College, a role in which he accompanies student ensembles and occasionally holds his own performances.

In 2009, the same year he moved to Richmond, Odinokikh also began playing with the Keene Chorale, an amateur choir with members from across the region. Since the group, which rehearsed at the Unitarian Universalist Church before the COVID-19 pandemic, performs different music at each of its twice-a-year recitals, Odinokikh said he’s often experimenting with new styles and sounds.

Even though most Keene Chorale members — many of whom are seniors — have no formal training, Odinokikh said he still holds himself to a high standard of performance, like he did with professional orchestras.

“I can tell that, of course, it’s a difference,” he said. “But I still love doing this because we’re still making music. I try to keep the same high level of my playing [whether] in Moscow or here. It doesn’t matter for whom I’m playing.”

Odinokikh drew praise from choir members last year, when the group rehearsed over Zoom to help prevent the spread of COVID-19, for helping them adapt to the virtual format. (They have since resumed in-person rehearsals and are scheduled to perform selections from George Frideric Handel’s “Messiah” at a free concert Saturday at Keene Ice.)

While Odinokikh rarely performs solo anymore — especially compared to when he played around 70 concerts a year in Russia — he said the rise of video-streaming during the pandemic made one recital at Keene State College’s Redfern Arts Center last month particularly meaningful: His friends and family back home, including his older sister, were able to watch.

In addition to the Keene Chorale, Odinokikh has also played with Raylynmor Opera in Peterborough and provided instruction to piano students at the Apple Hill Center for Chamber Music in Nelson.

After initially thinking he’d need to visit large cities like Boston or New York for distinguished performances, he said he’s been pleasantly surprised to find a wealth of talent locally.

“I was really impressed how much musical activity is happening here,” he said. “You look on a map, it’s like no big city. But almost every day we have … some chorus or concert.”

Plus, living in the Monadnock Region means the soft-spoken Odinokikh can play piano as loud as he’d like.

At a glance: Vladimir Odinokikh

Hometown: Born outside Moscow; lived in Weimar, East Germany, until age 6, before moving to …