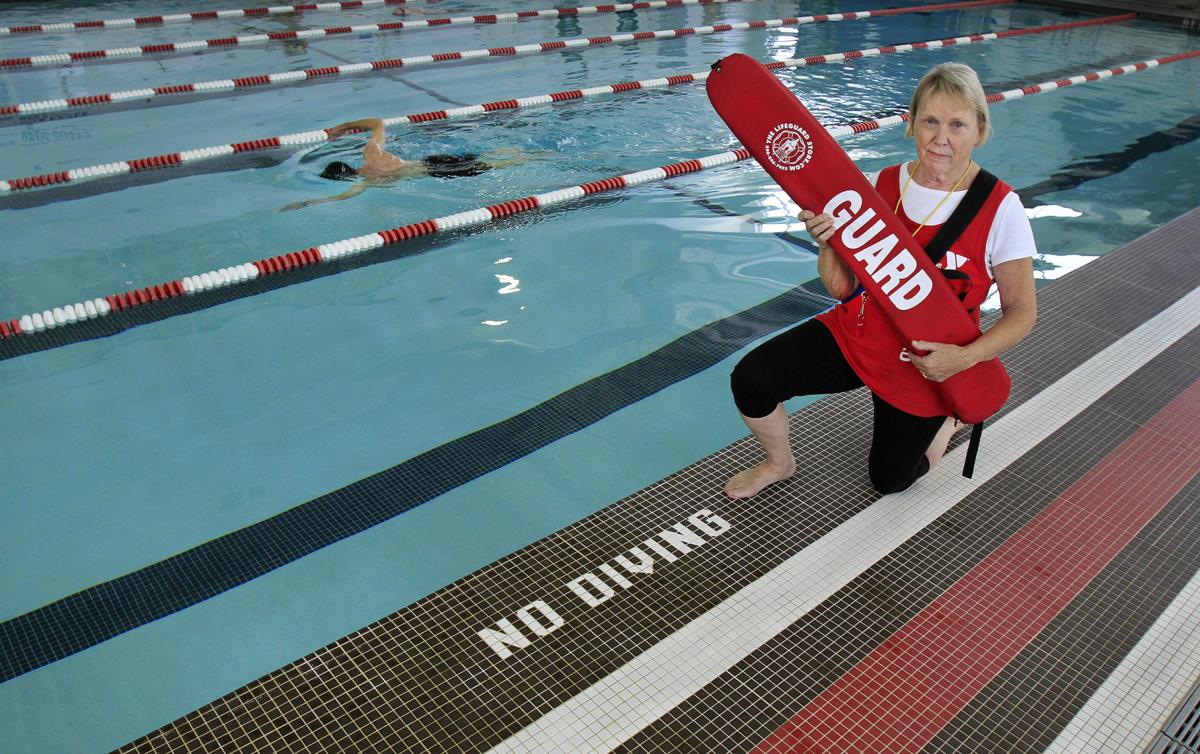 Jean Girard, who turns 73 Sunday, has been working as a lifeguard at the Keene Family YMCA after passing the certification test in the spring. 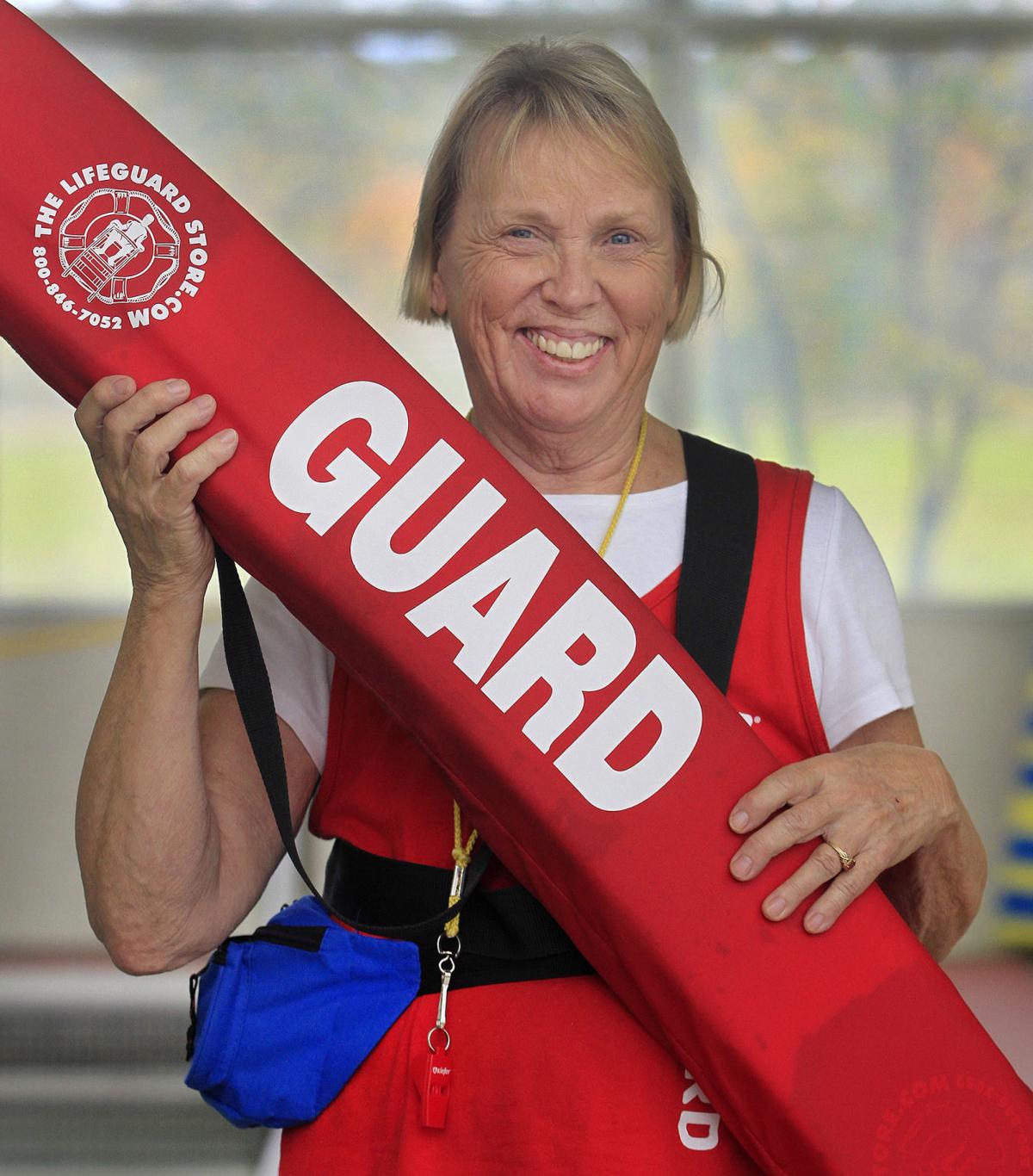 Jean Girard, who turns 73 Sunday, has been working as a lifeguard at the Keene Family YMCA after passing the certification test in the spring.

Jean Girard has always been drawn to the water.

Growing up in Claremont, she lived near a babbling brook that fed the swimming hole where she first learned her strokes. In her teenage years, she swam and sailed on Lake Sunapee. And later in life, she and her then-husband settled in Harrisville because of its proximity to the region’s lakes.

But she’d never been one for lap swimming — at least, not until about a year ago, when she began to take to the water in a different way.

Last December, the Keene resident — who turns 73 Sunday — decided to take a lifeguard certification course at the Keene Family YMCA. It began as a good-natured joke, she says, aimed at the Y’s aquatics director, Menachi Pillai, who’d been one of Girard’s students at Monadnock Regional High School in Swanzey before she retired 10 years ago.

Pillai had put up a sign at the Y’s pool reading something like, “Do you want to be a lifeguard?”

“Having had Menachi as a student at Monadnock, we sort of had a connection, and I’m maybe a little bit of a wise guy. So I said, ‘Hey Menachi, is there an age limit on being a lifeguard?’ ” Girard says. “And she said, ‘No, of course not. Do you want to be one?’ ”

Since retiring as a family and consumer sciences teacher, Girard had been thinking about taking a part-time job. After considering it for a while and doing a bit of volunteering with the Y’s preschool swim classes, she signed up to take the intensive class, which involved about 30 hours of training over two weekends.

Intensive is the key word. It required Girard to, among other things, swim 300 yards, tread water continuously for two minutes and retrieve a 10-pound brick from the deep end of the pool and then swim with it on her stomach.

It proved to be a little too intensive on the first try, Girard says. But she wasn’t about to give up. So she spent the next few months practicing at the pool a few times a week, 10-pound brick in hand. Staff and other clients at the Y were always cheering her on, she says, some even volunteering to help her “practice her saves.”

“It’s intensive, but Jean really put in the time and dedication to make certain that she could pass it, and she did it with flying colors,” Pillai said.

Meredith Stensaas, aquatics coordinator at the Y, said watching and helping Girard train for her certification was “inspirational.” And in the months since, she says, Girard has become a “strong part of the team, adding joy and adding warmth.”

“I think that people, regardless of age or background, don’t often ask for help. And so especially in those training months, [Jean] calling me ... and just kind of found [her] resources — she made it a community effort,” Stensaas said.

Girard passed the certification test in April, and she’s been on the guard stand ever since.

It was an occasion worth celebrating — her sons even bought her a bottle of Champagne to commemorate it, she says. And Girard’s persistence in achieving that certification is notable not just because of her age, but also because she’s gone through two bouts of breast cancer, undergoing chemotherapy, radiation and eventually a double mastectomy.

She doesn’t necessarily look back negatively on that time in her life, however. She recalls the first time she was diagnosed, when she was still teaching at Monadnock. After undergoing chemotherapy during the summer vacation and losing her hair, Girard had taken to wearing caps to class.

But her students told her to take them off, she recalls. They told her, “You’re beautiful just the way you are.”

“I think it’s really shaped who I am, the cancer experience. ... All in all, it was a good experience,” Girard says. “It made me really strong, really appreciate people, really want to give back to people.”

And when her cancer returned in 2017, Girard says she wanted to take care of it as quickly as possible so that she could “get back to the water.”

“The water is peaceful to me. It calms you,” she says. “Even sitting in the lifeguard chair with people jumping all around you — it’s just something about the water.”

Though some aspects of lifeguarding — namely the physical ones — were new to Girard, others were not. Much of guarding is about surveillance, she says — keeping your eyes trained on the people you’re responsible for at all times.

That’s a big part of teaching, too, she notes.

Education seemed a normal path for her, she says, as both of her parents had gone into the profession. And growing up with four siblings, she spent a lot of time helping around the house. So she chose family and consumer sciences as her subject matter — though it was still called home economics back when she graduated from Keene State College.

“I find working with kids that I needed something more than just being a math teacher — something that you could work with the whole child,” she says. “Which in family and consumer science, you deal with all aspects of their life. So it was much more meaningful for me.”

Sometimes the other guards will ask her what it’s like to work for a former student, but she says other than Pillai’s initial impulse to continue calling her “Ms. Girard,” it’s just like any other friendly working relationship.

And according to Pillai, Girard has added a new dimension to the lifeguarding team.

“I wish more people like Jean would feel brave enough to at least try, because I find that my older lifeguards, whether they’re just doing this as a part-time gig and out of school, they’re typically my most reliable and more apt to stay long term, which is really nice,” Pillai says.

Girard will come up for recertification when she’s nearly 75, and she says she’ll have to wait and see if she’s still up for the challenge at that point. But as long as she’s still doing well physically — and still having fun at the Y — she hopes to continue looking down from her spot on the guard stand.

“My father used to talk a lot, but one thing I do remember him saying is, ‘If you’re going to do something, do it because it’s fun.’ That doesn’t apply to all facts of life. But deciding to do this, I decided: It was gonna be fun, or I wasn’t gonna do it,” she says, laughing.

At a glance: Jean Girard