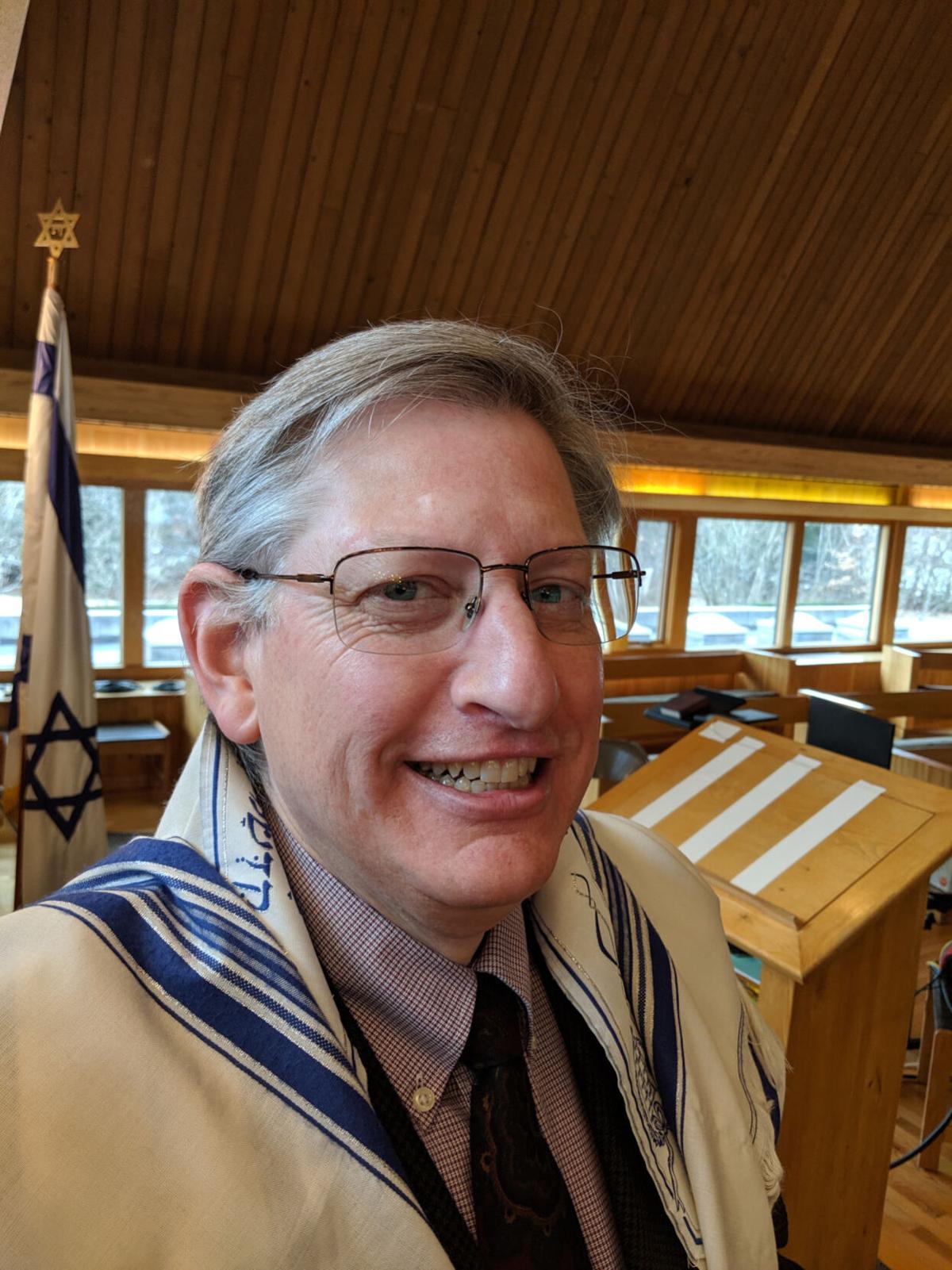 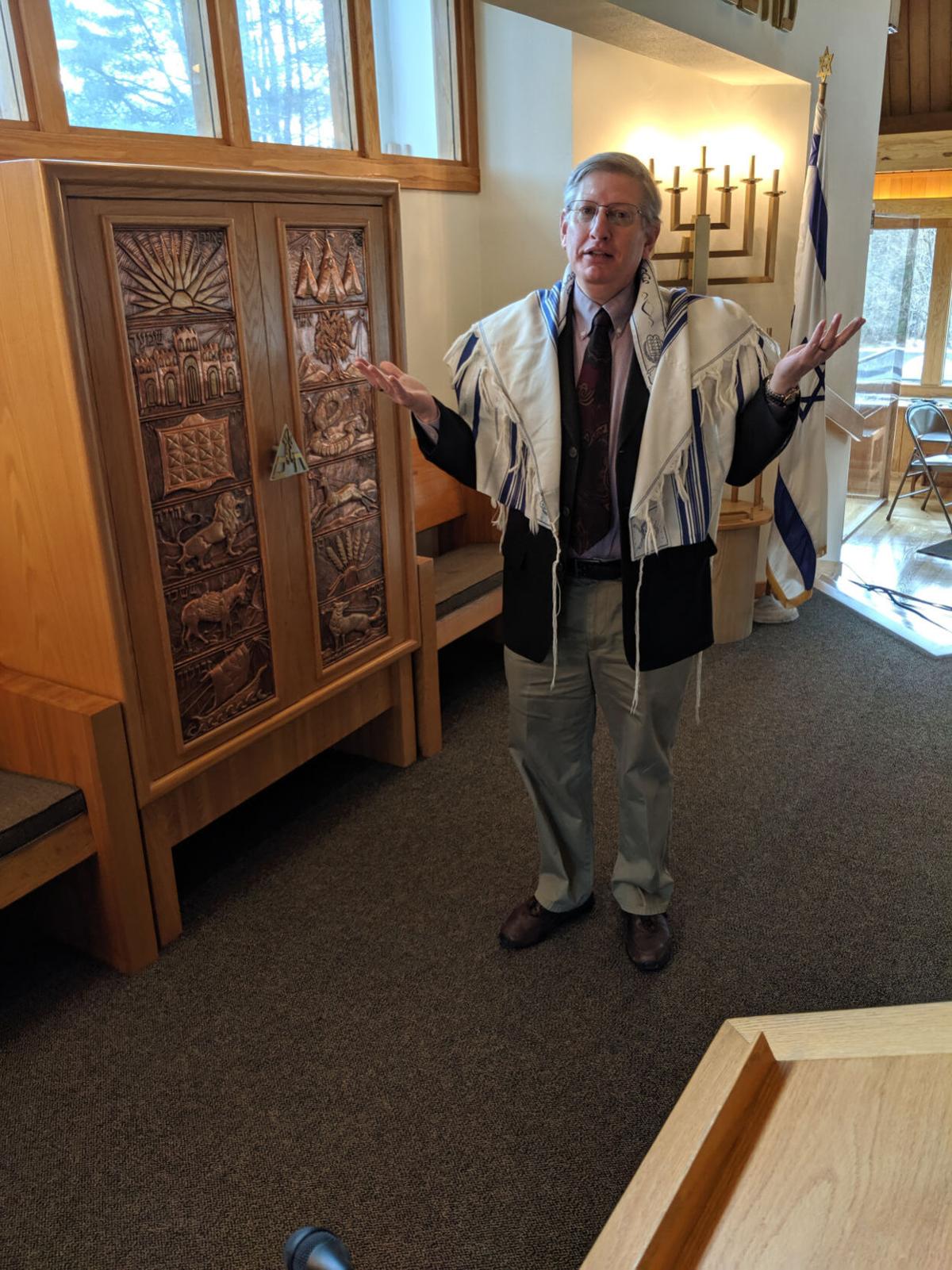 Rabbi Daniel Aronson, shown at Ahavas Achim synagogue in Keene beside the Torah ark, hopes to

expand the congregation’s size and encourage younger people to join. 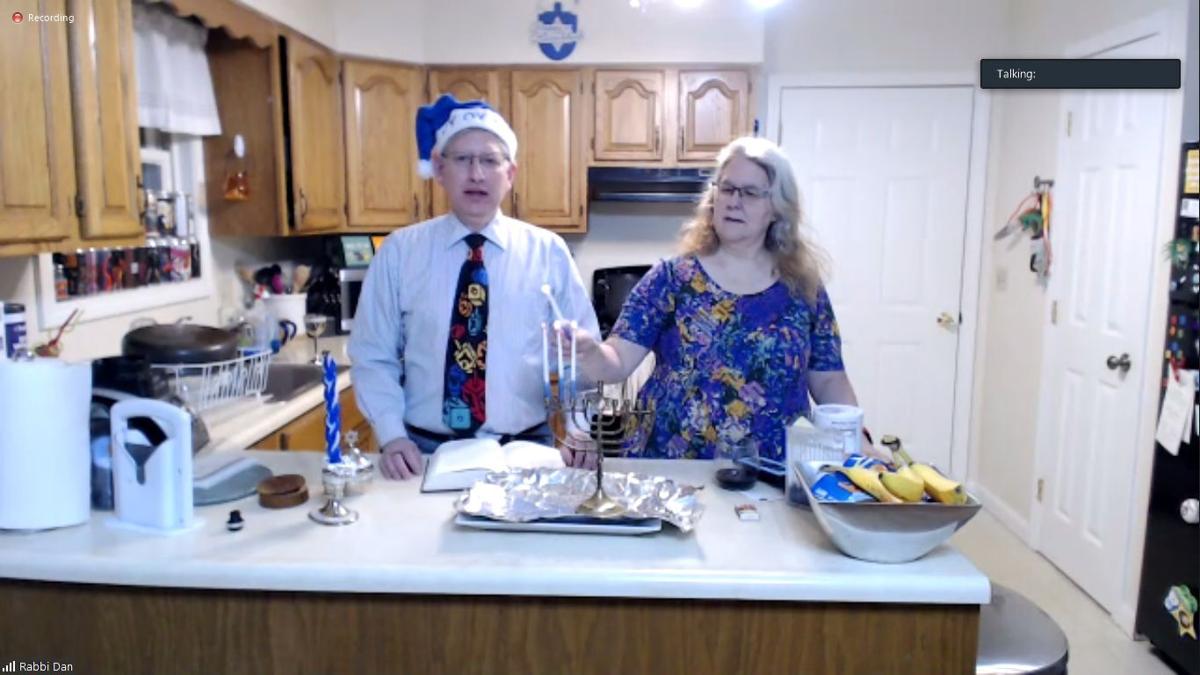 Daniel Aronson became rabbi at Congregation Ahavas Achim in Keene smack in the middle of the COVID-19 pandemic. He and his wife, Beth, are shown lighting the menorah this past December as synagogue members gathered virtually during Hanukkah.

Rabbi Daniel Aronson, shown at Ahavas Achim synagogue in Keene beside the Torah ark, hopes to

expand the congregation’s size and encourage younger people to join.

Daniel Aronson became rabbi at Congregation Ahavas Achim in Keene smack in the middle of the COVID-19 pandemic. He and his wife, Beth, are shown lighting the menorah this past December as synagogue members gathered virtually during Hanukkah.

Daniel Aronson arrived in Keene from Houston in mid-July to become the new rabbi at Congregation Ahavas Achim, and as he stepped out of his car, what struck him was the freshness of the air.

“In Houston, you usually get the smell of petroleum,” he says. “My wife and daughter said the same thing — the air smelled so good.”

It was a homecoming of sorts for the 56-year-old Aronson, to be back in New England after having been born and raised in Portland, Maine.

“Providence, Boston, Philadelphia, Houston. I moved to bigger cities each time, and it’s wonderful to be back in this part of the country,” he says. “The mountains. The trees. Amazing.”

It’s been a challenge, of course, taking on a new congregation amid COVID-19, and Aronson is looking forward to a day soon when people will have been vaccinated and can assemble without fear. Before the pandemic, the synagogue offered — in addition to traditional worship — lectures and educational seminars open to the public.

Although he and his family — wife, Beth, and daughter Katie — have been here just six months, Aronson says the area has the feel of a “very caring and loving community; I’m heartened by the openness of the town.” And he was pleasantly surprised at how many of the synagogue’s members are involved in various charitable activities, including with The Community Kitchen in Keene and Hundred Nights homeless shelter.

His plans for the synagogue in West Keene include expanding the size of its congregation — currently about a hundred families — drawing members from a wider geographical area, encouraging younger people to join, and providing an inclusive place of worship for Jews of diverse backgrounds and opinions.

“I’m a peacemaker and a community builder,” he says.

Jan Cohen of Keene, a long-time member of the congregation who served on the committee to select Aronson, wrote in an email: “Like President Biden, Rabbi Dan is a unifier. He has deep experience in several types of congregational settings and has made lasting friendships in all of them. His background in pastoral counseling is already coming in handy, with the pandemic creating issues of isolation and anxiety among the congregation and beyond.”

Ahavas Achim dates back to 1887 when about 10 Jewish peddlers began holding services together every Saturday morning in a clothing store, according to a history of the synagogue written by Michael Schuman. The first permanent synagogue was opened in 1947 on Court Street near downtown Keene and moved to the present location on Hastings Avenue in 1973.

Aronson’s backstory is one steeped in Judaism, beginning with his upbringing, the youngest of three sons to Dick and Adelle Aronson. His father was the CEO of a tire company and also the president of the Jewish Federation of Portland, and his mother was a real-estate agent. Both still live in Portland. His older brothers, Andrew and Michael, live in California and Florida, respectively.

After high school graduation, he enrolled in Brown University in Providence, R.I., which is where he first thought about becoming a rabbi, and where he earned a bachelor’s degree in Judaic studies in 1987.

He continued his education in Jewish studies at the urging of a professor at Brown and went on to earn a master’s degree in Jewish communal service from Brandeis University in Waltham, Mass. At the same time, he served as a graduate intern with the Anti-Defamation League of New England and with the university’s Hillel Foundation, as an adviser to several Jewish student groups.

In 1989, he became the assistant director of the Brown University-Rhode Island School of Design Hillel Foundation in Providence, where he worked until 1994. During this time, in 1991, Aronson served in a three-month internship as a chaplain at Roger Williams Medical Center. The experience had a powerful impact on the young man.

“I was busy with people at their most vulnerable, and I definitely knew I wanted to be a rabbi,” he says. “I was with people in very dark places, and it’s where I encountered God for the first time in my life.”

In 1994, he enrolled in the Reconstructionist Rabbinical College in Wyncote, Pa., and received his rabbinic ordination in 1999. While at the college, he was a student rabbi at a synagogue in Connecticut and a chaplain intern at the Philadelphia Geriatric Center. After ordination, Aronson served as student rabbi at Temple Beth Israel in Winsted, Conn., chaplain intern at the Philadelphia Geriatric Center, and visiting rabbi at congregations in Ewing, N.J., and Hewlett, N.Y. He then worked for nine years as a fundraising and admissions administrator at his alma mater, Reconstructionist Rabbinical College in Pennsylvania, followed by a stint as director of congregational learning at Ohev Shalom of Bucks County, Pa.

With his first wife, Aronson had a son, Jacob, now an engineer in Denver. After his divorce, he married Beth in 2005, who he had known during his days at Brown. In 2013, the couple moved to Houston when she was hired as a psychology faculty member at Lamar University in Beaumont.

In Houston, Daniel Aronson worked for several synagogues, including as visiting rabbi at Congregation Kol HaLev, and as rabbi at the Temple Beth Sholom in Salem, Ore., to which he commuted from Houston one week a month from 2013 to 2016. He also served as a chaplain at the famed MD Anderson Cancer Center. During this time, too, he earned a master of arts degree in Jewish education from the Jewish Theological Seminary in New York City.

In his many roles, Aronson says, he has learned much about himself and how he relates to people.

“I’m about being fully present, listening, being humble. I like to live my life in the gray area; the state of flux is where there is discovery.”

He sums up his views on religious belief by citing a book entitled “I and Thou,” written in 1923 by the noted Austrian Jewish philosopher Martin Buber, which posits that it is only through human relationships that we find meaning, and that ultimately lead us to God.

And he has a favorite quote — one from Frederick Buechner, a theologian, writer and Presbyterian minister:

“The place God calls you to is the place where your deep gladness and the world’s deep hunger meet.”

At a glance: Daniel Aronson