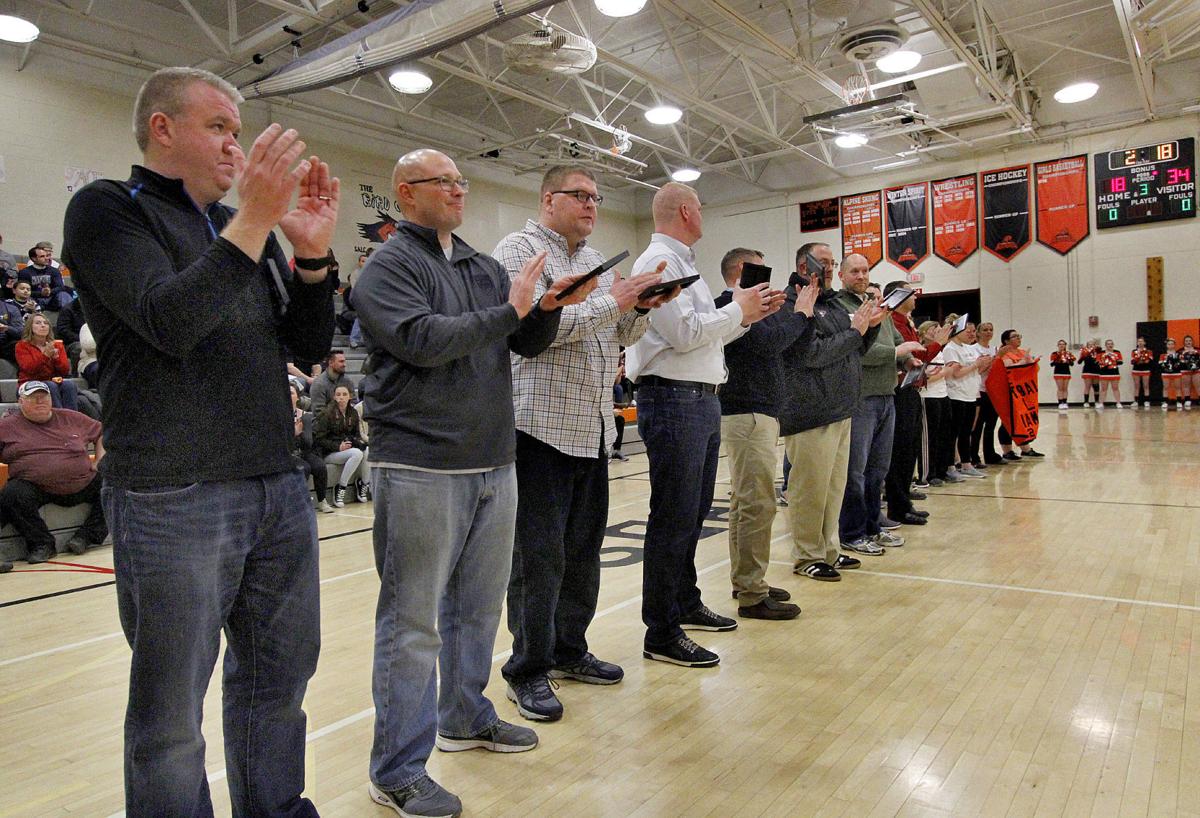 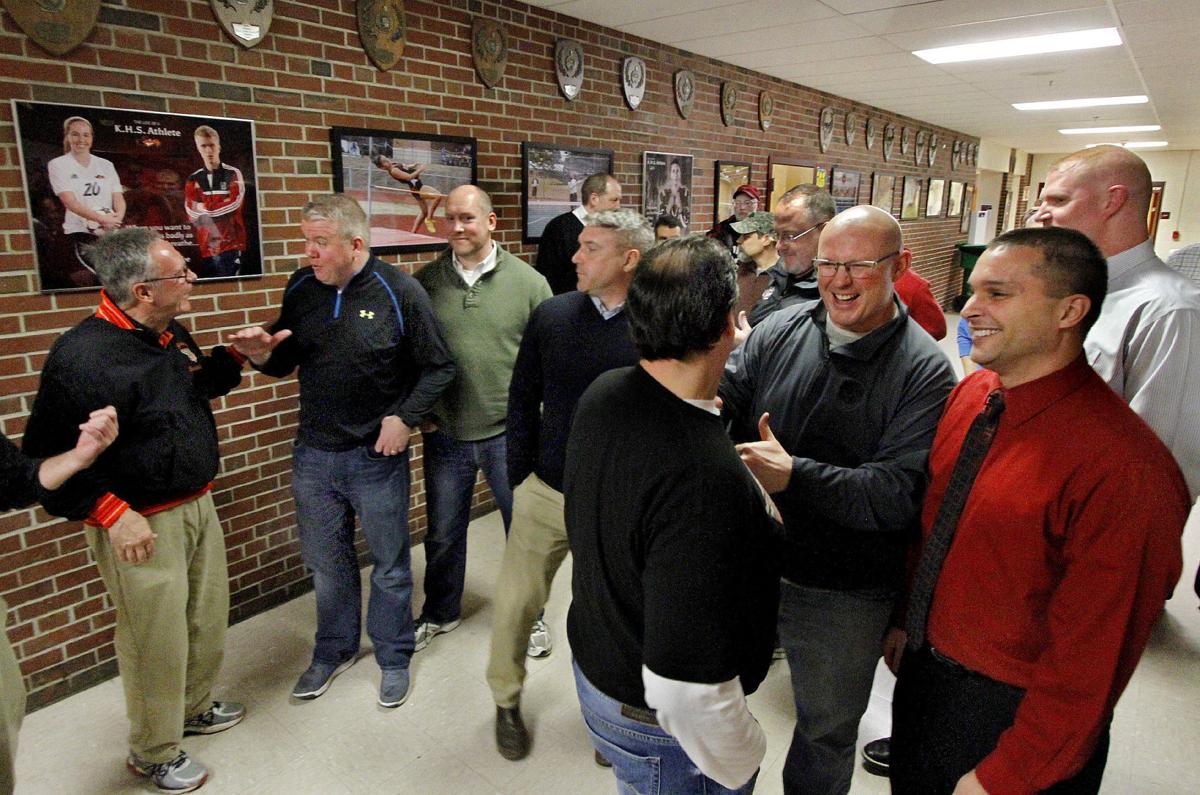 Members of the Keene High School 1992 boys basketball team gather in the hall outside the gym before being announced on Friday night.

Members of the Keene High School 1992 boys basketball team gather in the hall outside the gym before being announced on Friday night.

The tension in the Keene High School locker room was palpable. Players swayed nervously. They sought guidance from their coaches and captains, inspirational words before taking the court — minus head coach Phil Hebert, who was somewhere in Purbeck Gym laughing deliciously, wallowing in nostalgia.

Moments before tipoff, when asked about his strategy — flex? press? 12A? — Hebert would reply, “I just want to make sure they’re all sober after Elm City (site of pregame cocktails, minus the traditional spaghetti dinner).”

Into the void ventured assistant coach Jon Perry and captain Josh Hils, one of six captains of the 1991-92 Keene High boys’ basketball team.

Many of you thought you had played your last game on this floor, Hils told the team, his voice rising to the occasion. Well, now you get to play one more. Let’s get out there and make it count.

Duly inspired, on Friday night the “old team” — anchored by the ’92 squad and consisting of Keene High alumni from the 1980s and 1990s — roared (ambled) onto the court for an alumni game against its arch rivals, the “new team,” graduates in the 2000s.

As a chronicler of that 1991-92 team that took the city for a wondrous ride to the state championship game, I’d love to report that it turned the clock back and whipped the young’uns. I’d love to describe Jim McGilvery’s silky-smooth jumper as unstoppable, Jeremy Casson’s board work as impeccable, Tom Killelea’s wing play as outstanding. I’d love to wax upon the prodigious defensive effort of selfless Steve Wilber.

Alas, that would be, as they say, alternative news.

The team was missing its floor general, so that didn’t help. As CEO of the Minnesota Timberwolves, Ethan Casson had other obligations. Though captain Mike Koscinski, who is head boys varsity basketball coach at Riverside High School in Leesburg, Va., wasn't there, his parents, Dave and Nancy Stone, were; they hosted many of the team’s spaghetti dinners. Hils and Mike Lunny were sidelined with age-induced maladies, and a few others couldn’t make it back as well.

McGilvery, now living outside Philadelphia, did return, bringing his family and bagpipes, wearing his Irish tweed cap to the pregame gathering at Elm City Brewery. Eddie Paquin, Jason Parker and Bob Blaisdell made it onto the floor.

Perry, an ’87 graduate and English department chairman who organized Friday’s Community/Alumni Night — the proceeds benefited a number of area organizations — also suited up. But it wasn’t the game that made this night. It was the bonding of teams and cheerleaders from various eras, the pep band pitching in, all celebrating the 25-year reunion of the ‘92 club.

It was about swapping memories and stories, from watching at least a portion of the movie “Hoosiers” on VHS before every game to Hebert’s greatest hits of halftime tirades.

Those who were here 25 years ago may remember home games regularly drawing 1,300 fans, while others listened at home as Bob Lund, the voice of the Blackbirds, described the action on radio. Now living in Florida, Lund couldn’t make it Friday night, but the ’92 team raised a toast in his honor.

The school and team also remembered former teacher, coach and scorekeeper Bill DiGuilio with a moment of silence before the varsity game. DiGuilio died Jan. 23.

The Birds, 15-3, were seeded No. 1 in the Class L tournament, and a “Hoosiers”-like procession of vehicles stretched from Keene to Durham for the three Class L tournament games at sold-out Lundholm Gymnasium. The crowning achievement slipped away, however, as Keene fell 48-43 to Winnacunnet Regional in the finals. Yet it’s the journey, not the bitter end, that’s remembered so fondly. ...

The front page in The Sentinel on opening night, Dec. 18, 1991, read: “Bush admits U.S. mired in recession.” The team preview story in sports read: “Birds will flex, but they’re not likely to break.”

Well, they did both on opening night. Employing their newfangled flex offense in the claustrophobic Trinity High gym, the Blackbirds lost their opener 62-51. Hebert, the second-year coach, continued to insist the squad was capable of a special season even though it went 9-9 the year before and was ousted in the preliminary round of the tournament.

Signs of progress came soon, first in the holiday Queen City tournament in Manchester when Keene reached the finals before losing 57-47 to Central. It would avenge that loss a week later with a 64-61 win. The tone was established. The team went undefeated at home that season, and didn’t lose another game after a 69-66 setback Jan. 24 at Pinkerton Academy.

The special moments piled up, culminating on the final night of the regular season when McGilvery needed 40 points to reach the 1,000-point mark for his career. He got 42 in an 88-74 win over Portsmouth, a game punctuated by one of loudest and largest crowds ever at Keene.

Meanwhile, spaghetti dinners and “Hoosiers,” a basketball movie set in the 1950s starring Gene Hackman, became team trademarks. “We’re kind of obsessed by it,” said Wilber, today a regional sales manager for Intrafusion, a national health care management company. “My favorite part is when before the championship game the minister comes in and gives his David and Goliath speech.”

The championship game was, well, a dud. Winnacunnet, a team they beat 77-59 in the regular season, sat in a 2-3 zone and dared the Birds to shoot from mid-range. “It was kind of weird,” Ethan Casson would say after the game. “I kept thinking about (Trinity). They let us shoot all night and we missed, just like tonight.”

No, the ’92 team didn’t old-school the new-school team Friday night. It lost 66-41. Its signature song, Van Halen’s “Right Now,” blared through the gym when the team was introduced at halftime of the varsity game, but that didn’t help. I’d like to report that the game was closer than the final score. It wasn’t.

Still, basketball today remains in their blood. Most either coach or have coached their own teams, youth level on up. Vestiges of the past occasionally surfaced Friday, from McGilvery burying a jumper on the wing to Paquin’s no-look pass to Jeremy Casson for a layup.

No one stopped smiling, of course, except when they were laboring after a few trips up and down the court. When Kyle Hebert, son of the coach, drained a rainbow NBA 3-pointer for the new team, he detoured to the ’92 bench to give his father a playful jab.

Adding depth to the night, Keene’s Jim Moylan and Rick Zecha wielded the whistles, reuniting a tandem that’s been officiating for decades. They each had worked varsity games (Moylan at Keene, Zecha at Monadnock) earlier that night. And when they called Killelea for a foul, he dissented upon arriving at the bench, his teammates chuckling unsympathetically.

“All ball,” Killelea moaned. “I still can’t get a call in this gym.”

As for Perry, an assistant coach on the ’92 team, he was everywhere. First, he nailed a 3-pointer to pull the old team into a 3-3 tie. He blocked shots. He snapped a no-look, behind-the-head pass to Joe Tolman for two. He led the team in turnovers, or so he says.

Saturday morning, on the team’s Facebook messenger site that buzzed with post-game pictures and teammate interplay, Perry was reflective.

“Thanks to everyone who helped make it special,” he wrote. “We ended up not making much money in donations, unfortunately (he’s still accepting them), but we brought the community together and had a great time. We’ll have to do it again.”

It was quite a ride.

This article has been changed to correct the job of 1992 player Mike Koscinski.