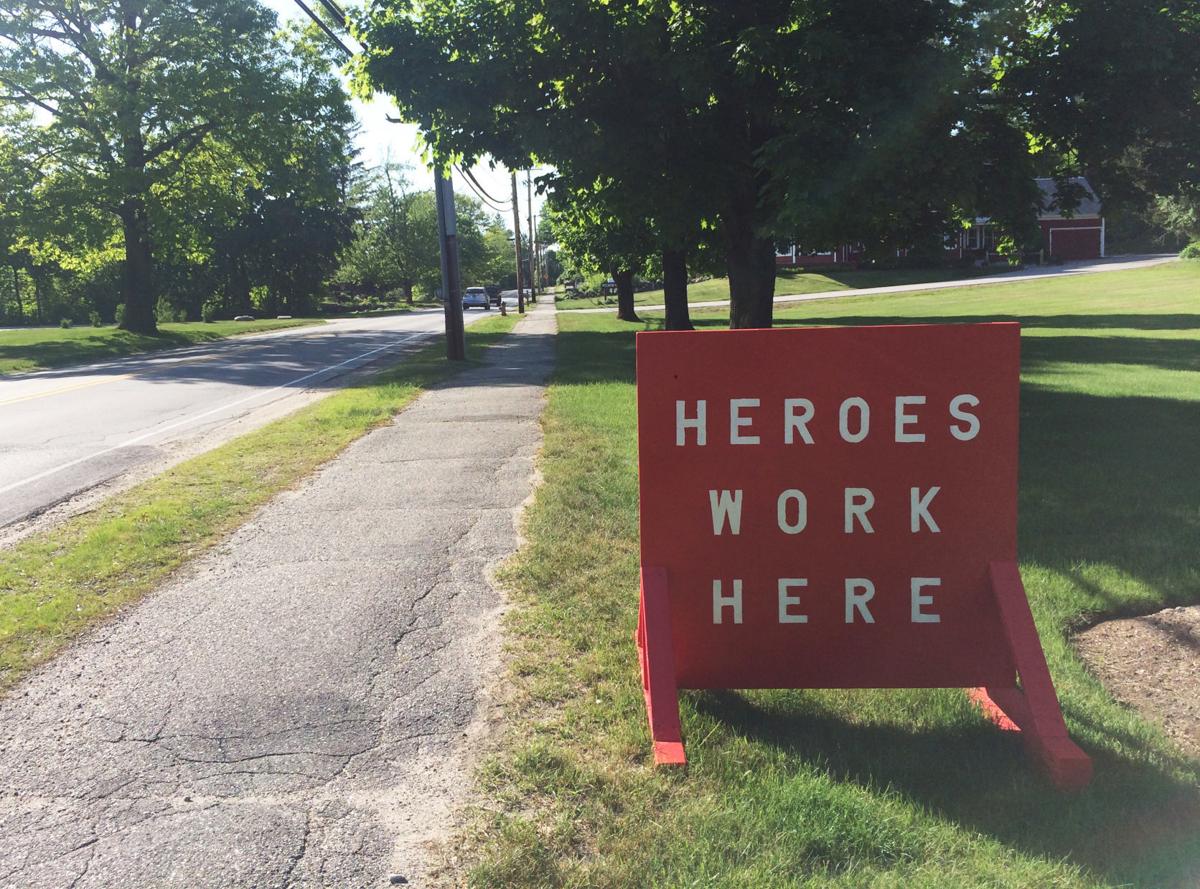 A sign on Court Street in Keene pays tribute to the workers at Genesis Keene Center nursing home. 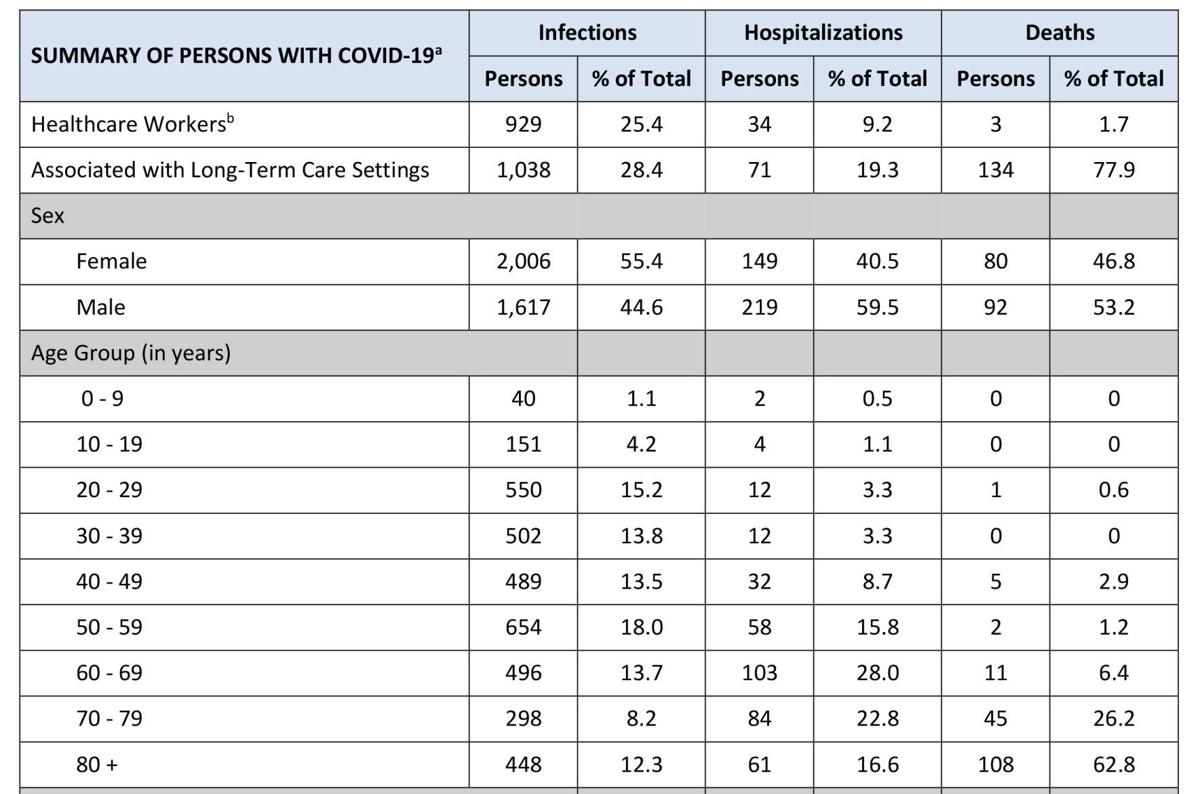 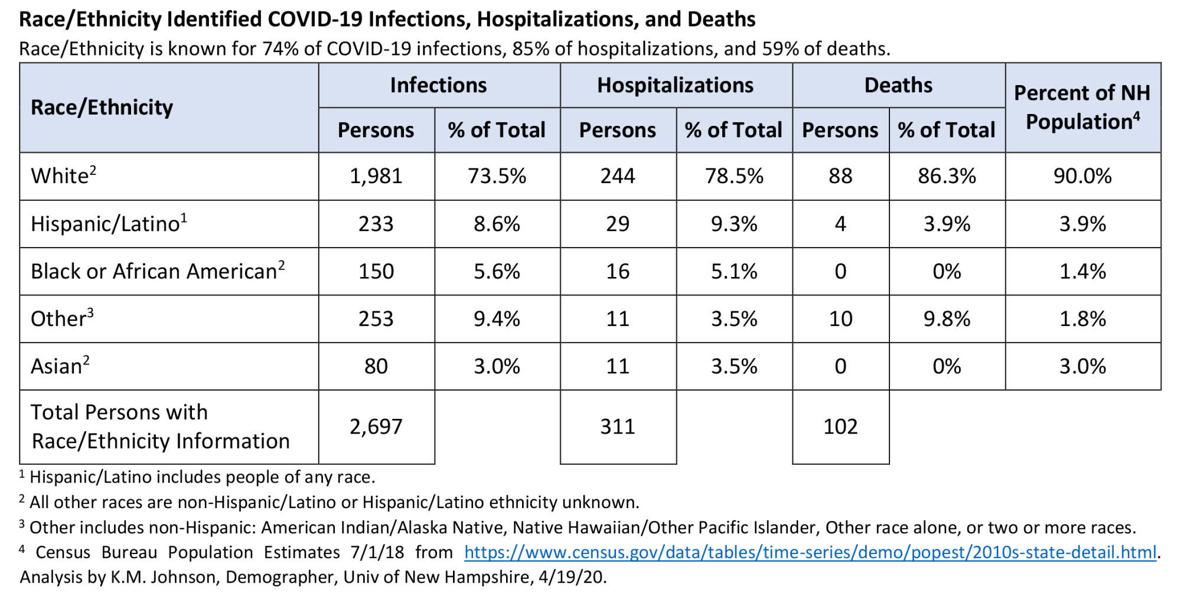 Nearly all of New Hampshire’s COVID-19-related deaths have been elderly residents, often living in long-term care facilities. Health-care workers represent a quarter of those known to have come down with the viral disease. And women and minorities appear to make up a disproportionate share of the state’s cases.

Those are among the takeaways from detailed demographic data being reported weekly by the N.H. Department of Health and Human Services.

The most recent report includes data through May 18, when 3,652 state residents had tested positive for COVID-19 and 172 people had died. (Those totals have since risen to 4,231 and 214, respectively.)

Here’s a look at some of the data in the latest report.

Older people are considered to have a higher risk of severe complications due to COVID-19, and New Hampshire is no exception.

In other words, people who were 70 and older represented 89 percent of New Hampshire’s COVID-19 deaths through May 18.

The state reported 11 deaths among people in their 60s. Two people in their 50s, five in their 40s and one in the 20-29 range had also died. (The state’s data don’t indicate whether they had pre-existing health issues that put them at greater risk for serious complications.)

Most of the state’s deaths — 134, or 78 percent, as of May 18 — have been associated with long-term care settings like nursing homes and facilities for people with disabilities.

Group-living settings and older or medically compromised populations make those facilities especially vulnerable to COVID-19 outbreaks, according to the Centers for Disease Control and Prevention.

Many health-care workers are getting sick.

There’s a reason signs outside health-care facilities proclaim “Heroes work here.” Health-care workers accounted for 25 percent of all confirmed positive cases in New Hampshire as of May 18, according to the state’s data.

Of those 929 people, 34 required hospitalization due to COVID-19. Three died.

The large number of health-care personnel testing positive may have to do with a greater risk of exposure in the course of doing their jobs, in addition to the state’s concerted effort to test as many long-term care workers as possible.

More women have tested positive, but more men have died.

The state’s data show that substantially more women than men have tested positive for COVID-19. But that flips when it comes to hospitalizations and deaths.

Approximately 55 percent of people who had tested positive by May 18 were female, while about 45 percent were male. But nearly 60 percent of patients hospitalized for COVID-19 were male, and men accounted for 53 percent of deaths.

That mirrors the national data, which also show noticeably more men than women dying, according to the CDC, as well as state-reported data in Vermont.

People of color seem to be disproportionately affected.

The available national data indicate that people of color are contracting COVID-19, and dying from it, at higher rates. To an extent, that appears to hold true in New Hampshire, though the state does not have race/ethnicity data for all cases or deaths.

Latino people make up 3.9 percent of New Hampshire’s population, but 8.6 percent of known COVID-19 cases for which race/ethnicity information was available, according to the state health department. Black residents accounted for 5.6 percent of cases, but only 1.4 percent of the statewide population.

People whose race was listed in the state data as “other” — which includes Native Americans, Pacific Islanders and people who identify as two or more races — represent less than 2 percent of the state’s population but accounted for more than 9 percent of both deaths and cases, according to the state data.

White residents of New Hampshire, who make up 90 percent of the population, accounted for 74 percent of cases and 86 percent of deaths.

An April report from the Kaiser Family Foundation identified several factors behind COVID-19’s disproportionate impact on the national level, including pre-existing disparities in underlying health issues, access to medical care and economic and social conditions.