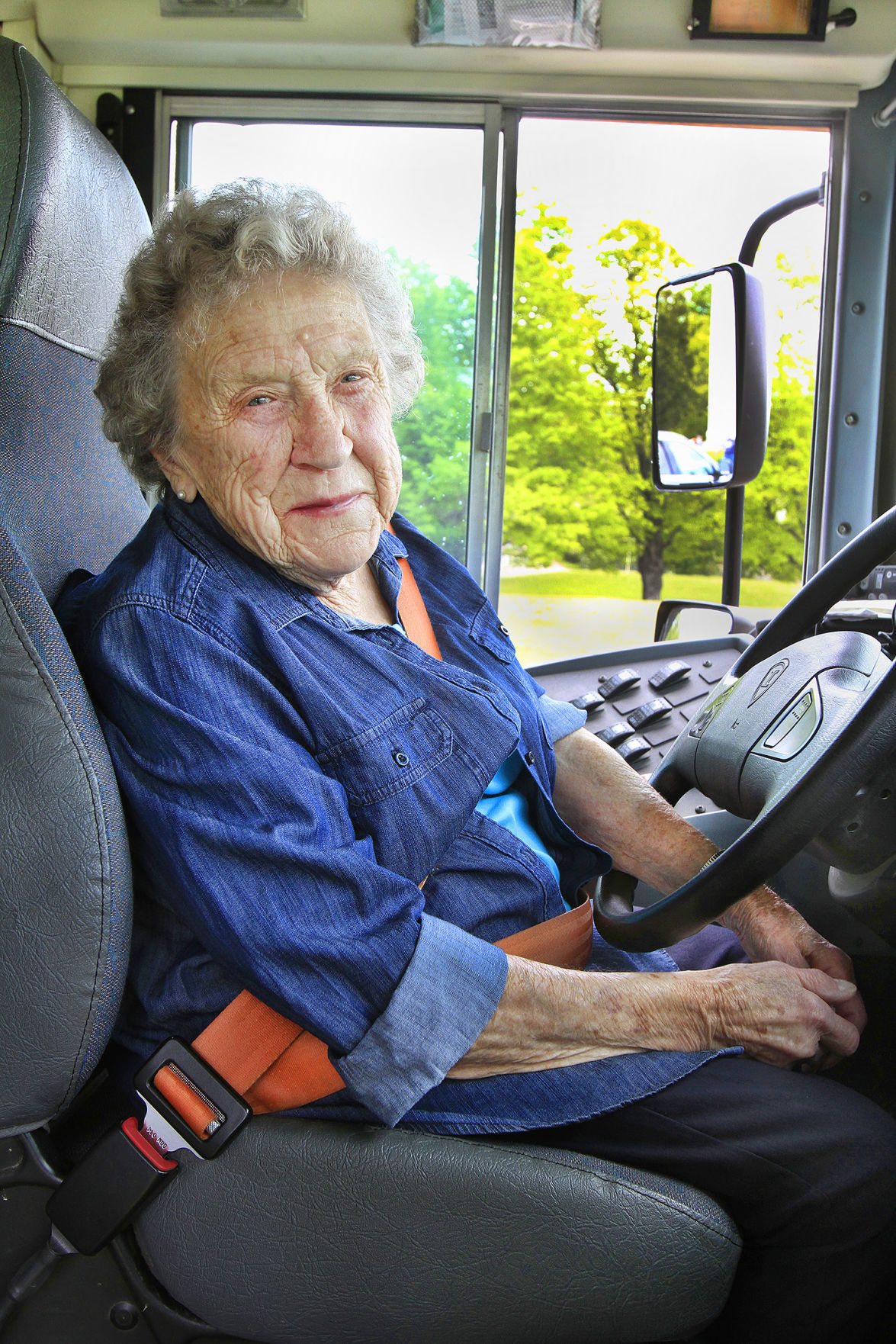 Esther Luther, 90, in the bus she drove on Thursday as a farewell after 50 years of ferrying kids to school. 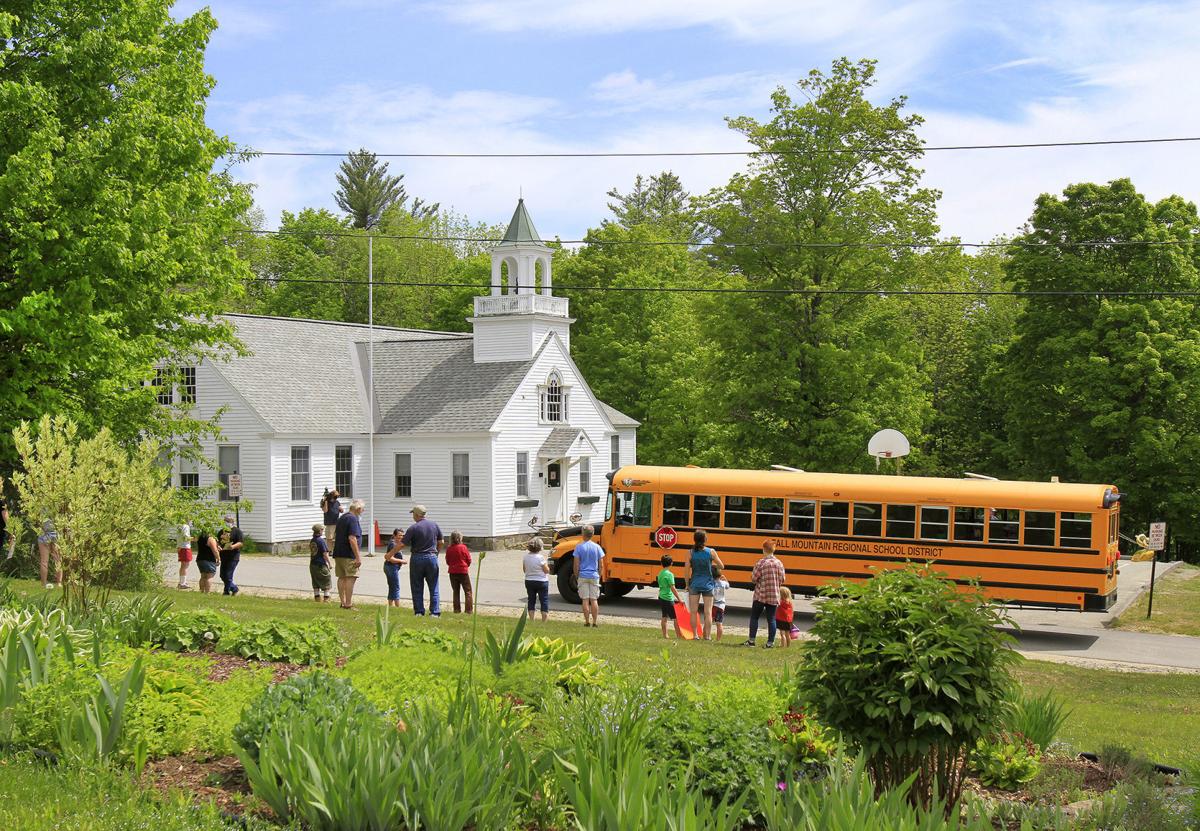 Well-wishers gather at the Acworth Center School on Thursday morning to greet and see off 50-year bus driver Esther Luther, 90, as she drove a bus one last time before retiring.

Esther Luther, 90, in the bus she drove on Thursday as a farewell after 50 years of ferrying kids to school.

Well-wishers gather at the Acworth Center School on Thursday morning to greet and see off 50-year bus driver Esther Luther, 90, as she drove a bus one last time before retiring.

ACWORTH — When she’s not splitting and stacking wood, you may have found Esther Luther driving the local school bus, mowing the lawn, pitching in on the family farm, assisting in corralling a wayward cow.

Nothing unusual about that in rural northern New England. Except, perhaps, that Esther Luther is 90 years old.

After a 50-year career, she officially gave up one of those duties Thursday, and it wasn’t chopping wood. Mrs. Luther’s Last Ride, a final turn behind the wheel of a full-sized yellow school bus, gave townspeople a chance to say thank you and goodbye. Beginning and ending at Fall Mountain Regional High School in Langdon, the three-bus caravan made its way up Route 123A and into Acworth, tracing part of the route she drove for a half-century.

Several family members, friends and former pupils rode in Luther’s bus, while residents waved from their yards on the lightly traveled roads. Some set up lawn chairs on the sides of streets, farmers took time off from their chores to watch her bus pass by, and others displayed “thank you Mrs. Luther” signs. The parade also featured a few stops, notably at the Acworth Center School and the South Acworth Village Store. About 30 people greeted Luther at the store, including state Rep. Judy Aron, R-Acworth, who read a proclamation from Gov. Chris Sununu commending Luther on her retirement.

From the store, she drove another couple miles to Tucker Road, where more well-wishers greeted her with flowers. The three buses then turned around and headed back to Fall Mountain, where multiple generations of Luther’s passengers gathered for a socially distanced cookout. And an era came to an end.

“I’m overwhelmed,” Luther said during one of the stops. Later, she added, “Well, it was much bigger than I thought. I thought I did quite well to hold the tears back.”

The original plan called for Luther to drive her route for the final time with a trainee on board, followed by a gala retirement party at the Fall Mountain Regional School District central office. Those plans had to be scuttled when the coronavirus pandemic idled the buses in March, so school officials came up with the rolling salute.

“This was amazing. Seeing so many people out there was a great part of it, and realizing how much they wanted to see me is a great feeling,” Luther said.

A lifelong farmer, Luther started driving students to school in a van in 1969 before eventually taking the wheel of a bus. “There can’t be anybody close to her record,” said Arthur Lufkin, transportation manager in the Fall Mountain district. “It’s just incredible what she’s done.”

Luther is the matriarch of Parnassus Farm on Luther Hill Road, which is operated today by her son, John, and his wife, Robin. Esther’s husband, the late Earl Luther Jr., took over the farm from his parents, who started it in the 1940s. The family has long been active in community events, including town government, where John is the longtime moderator.

“I was a farmer’s daughter, a farmer’s wife, and now I’m a farmer’s mother,” she said with a chuckle.

It’s a good bet no one knows Acworth’s narrow, hilly, curvy and often bumpy roads as well as Luther. In winter, not for the faint of heart on Acworth’s treacherous country roads, Luther was at her coolest. Driving in snow never intimidated her, she says, and when things got slippery, she improvised.

One of her favorite stories took place decades ago, before buses had radios and drivers were on their own. She had one passenger left, a girl, and she had to stop the bus on the hill leading to her own farm. The vehicle in front of her was stuck, and the driver was putting on chains. When the road finally cleared, Luther said, “I tried my best to get up the hill, but I only made it a certain distance.”

But the girl had to get home. So they trudged to Luther’s farm and climbed on a tractor. The girl, well dressed for the harsh conditions, Luther complimented, sat in her lap as they drove the mile to her house. “Anyway, it was quite a ride, and I’ll never forget it,” she said. When her bus got stuck in another storm, her son John pulled it up the hill with a skidder.

“We have an 80-something driver, and she never complains about driving the toughest route in town,” Lufkin said Tuesday. And if she reports a road needs salt, he added, the highway department is right on it.

Luther was born and raised on a farm in Charlestown, about 5 miles from her current farm. She graduated from Charlestown High School in 1948, and her brother fought in World War II. After high school, she worked at Joy Manufacturing in Claremont and married Earl at age 27. “I moved to Acworth, and I’ve been here ever since,” she said.

Though certainly not physically imposing, she had no problems enforcing the rules on her bus. “She’s sweet and not very tall, but the kids never gave her any problems, and she put them in their place if she needed to,” Lufkin said. “After all, she probably drove their parents, and she knows just about everyone [in town].”

The district doesn’t have a mandatory retirement age for its bus drivers, but they have to pass a physical, and those over 70 must take a driving test administered by the Department of Transportation. “She does not look at herself as old,” Lufkin said. “I wish I had 10 more like her to drive a bus.”

Luther said 90 is the right time to turn in her keys, though it doesn’t mean she’ll be idle: “I have a huge lawn that I mow and a five-bedroom house. So I have my work cut out for me.”