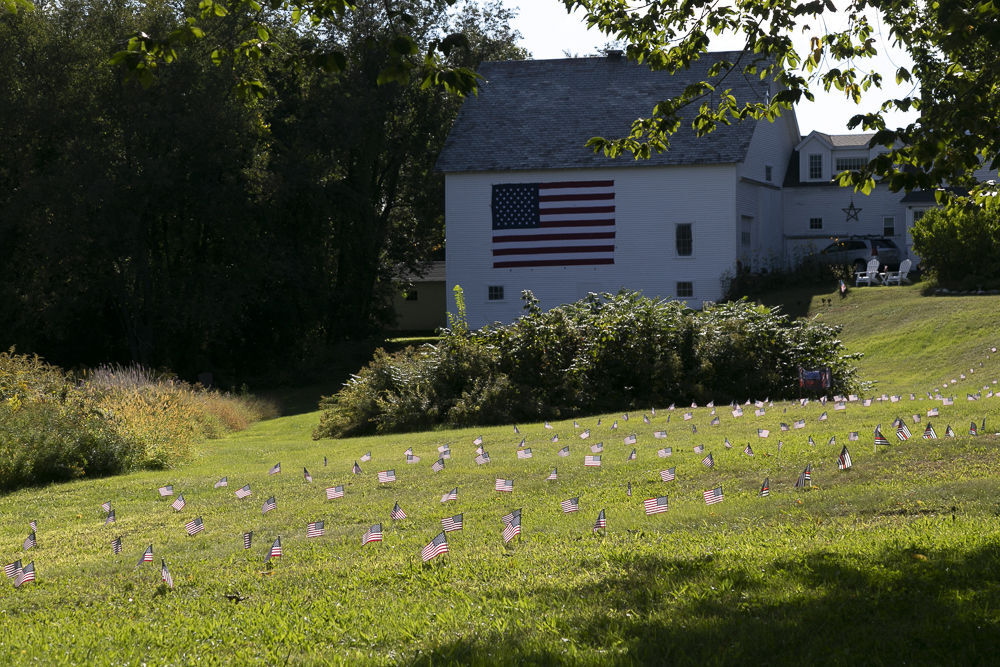 With the help of Keene firefighters, Alison Adams installed 343 flags outside her home to commemorate firefighters who lost their lives on 9/11. 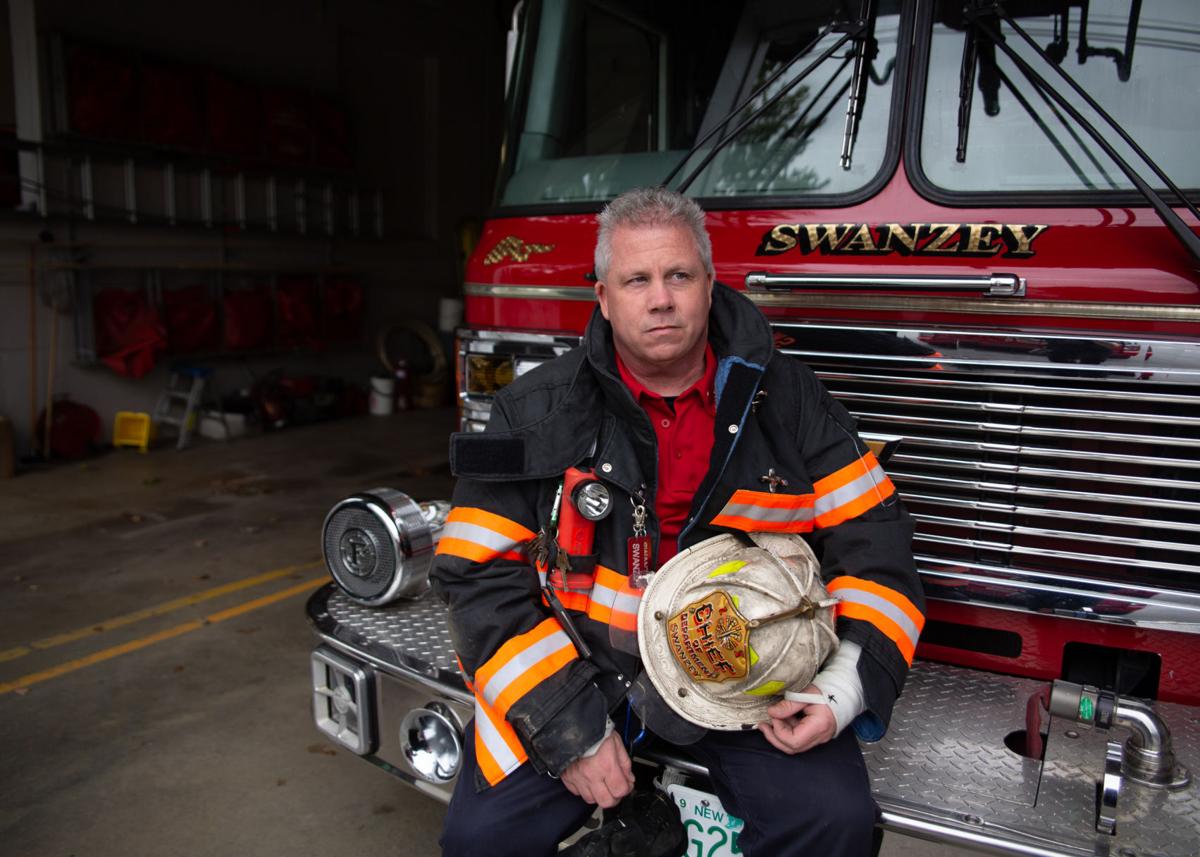 “It was almost like a helpless feeling — you wanted to help, everyone wanted to help,” said Swanzey Fire Chief Bill Gould, who was a firefighter in New Haven, Conn., on Sept. 11, 2001, and traveled to New York City with other firefighters the day after the terrorist attacks. He’s shown here, in front of Ladder 1 in Swanzey on Friday. 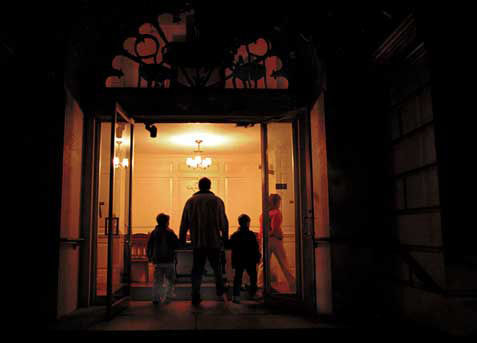 People enter the United Church of Christ in Keene for an interfaith prayer service the night of Sept. 11, 2001. 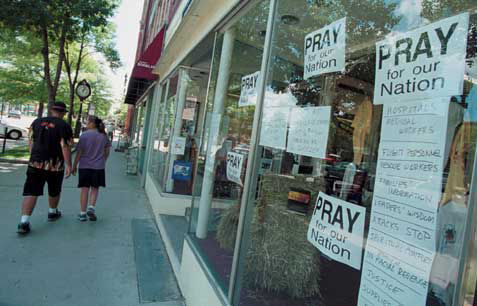 Concern for everyone touched by the 9/11 attacks is

on display in a downtown Keene storefront shortly afterward, in this file photo from 2001. 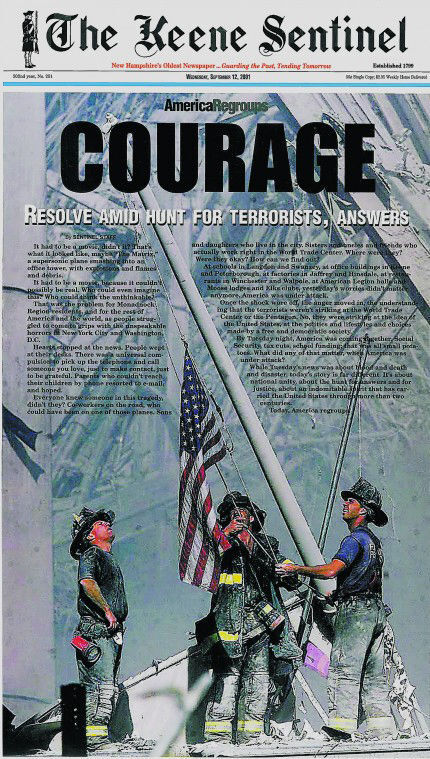 With the help of Keene firefighters, Alison Adams installed 343 flags outside her home to commemorate firefighters who lost their lives on 9/11.

“It was almost like a helpless feeling — you wanted to help, everyone wanted to help,” said Swanzey Fire Chief Bill Gould, who was a firefighter in New Haven, Conn., on Sept. 11, 2001, and traveled to New York City with other firefighters the day after the terrorist attacks. He’s shown here, in front of Ladder 1 in Swanzey on Friday.

People enter the United Church of Christ in Keene for an interfaith prayer service the night of Sept. 11, 2001.

Concern for everyone touched by the 9/11 attacks is

on display in a downtown Keene storefront shortly afterward, in this file photo from 2001.

On his 35th birthday, Bill Gould was at home in New Haven, Conn., with his wife, trying to decide how they would spend the day.

But then the phone rang, and the person on the other end told him to turn on the television.

“Just like everyone else, we were absolutely glued to the TV,” said Gould, who turns 55 today and is now chief of the Swanzey Fire Department.

On the 20th anniversary of the attacks, Gould and other community members are remembering the tragedy that shook the country.

That afternoon, Gould met with some of his colleagues at the New Haven Fire Department’s training center.

“Everyone was in disbelief. Nobody knew what was going to happen next,” he recalled on Friday. “Everyone had questions, but nobody had answers.”

The next morning, he and other New Haven firefighters grabbed their gear and took a train into the city. The only passengers were first responders. As the train made stops along the way, station platforms were lined with other firefighters, carrying their gear and ready to board, looking to help New York City however they could, Gould said.

Toward the end of the 90-minute commute, he could see lingering smoke hovering over the city. It was less than 24 hours after the attacks.

“It was strange, very, very strange how [the city] just kind of came to a halt, especially lower Manhattan,” he said.

The firefighters arrived at Grand Central Station and made their way to the Javits Center, where they joined other departments from New York, New Jersey and Connecticut, and waited for orders.

“We were on the periphery,” Gould said. “Some departments went right to the site. We actually went back through the city and stopped at a couple fire houses to see if they needed anything.”

After six or seven hours, the New Haven group returned home with a mix of emotions.

“It was almost like a helpless feeling — you wanted to help, everyone wanted to help,” Gould said. “They were trying to get order down there. We didn’t want to hamper those efforts.”

Gould said that while he wasn’t personally close with members of the New York City Fire Department, he had attended courses and classes with several of those who were killed. He recalled that almost every day, firefighters from New Haven were heading into the city to attend funerals.

Just over 200 miles away, residents of Keene — like people around the world — tuned in to the news. Businesses downtown opened early on 9/11 so people could gather and watch the coverage in the company of others. Police departments were on high alert, trying to make their presence felt throughout their communities. Schools remained open, and older students knew what had happened.

At ConVal Regional High School, students and teachers gathered in the library, 150 at any given time.

“I don’t think any of us can understand the magnitude of what’s happened,” said social studies teacher Michael Wozmak at the time.

In an interview on Thursday, Wozmak reflected on that day. He said he returned to his classroom at the beginning of each period to retrieve his students and bring them to the library to watch the news reports.

“It was just absolute silence as things were unfolding,” he recalled.

Twenty years later, Wozmak still teaches at ConVal. But now most of his students were born after the tragedy, and he said it’s difficult for young people to fully grasp the emotional impact of that day.

He shows his students the film 102 Minutes That Changed America, a collection of video and audio clips recorded on 9/11.

“They begin to understand, seeing the emotion and fear and terror on people’s faces as they’re running through the streets.”

He added that he then goes deeper to discuss the long-term impacts of the events, how they affected the victims’ families, and the ways the country has changed post-9/11.

The evening of the attacks, clergy members from local churches gathered with approximately 350 area residents at the United Church of Christ in Central Square for a vigil.

Rev. Peter Coffin, who at the time was affiliated with St. James Episcopal Church, attended the vigil.

Coffin’s sister lived in New York City at the time, and when he first called her to see if she was OK, his call went to the answering machine.

“When the beep sounded, I couldn’t speak. I couldn’t find the words to say,” he told The Sentinel at the vigil. He later connected with his sister and learned she was safe.

“It felt like a common experience of panic and concern, and then finally resolution,” Coffin — who lived in Marlow before moving to South Carolina last year — reflected on Thursday. “A joyous comfort and resolution to connect with loved ones — if they were indeed alright. I felt that was something everyone at the gathering could relate to.”

At the vigil, Coffin and other religious leaders read scripture and addressed the community.

“Nobody prepared anything. It was probably the best way to do it, because everyone spoke from what they were feeling and thinking that day,” he said.

Artist James Pelletier was a junior at Keene State College in 2001. Before attending Keene State, he spent a significant amount of time in lower Manhattan in the 1970s and ’80s. In 1979, he coordinated with building managers in lower Manhattan for his NIGHT/LIGHT exhibition, a larger-than-life display of geometric shapes through the windows of buildings.

When the attacks happened on 9/11, he knew he wanted to return to the city. In the months that followed, he connected with the New York branch of Recording for the Blind & Dyslexic (now known as Learning Ally), and proposed creating a recording of the names of all the victims. The group also worked with the United Nations to ensure all the names were pronounced correctly.

On the first anniversary of the tragedy, the recording was played at Battery Park.

Pelletier returned to the city annually to be involved with the memorials, but said in 2004 traveling to New York became too expensive. In 2008, he contacted Cathedral of the Pines in Rindge to see if the organization would host the recording. He also expanded it to include the names of all the 9/11 victims, including those at the Pentagon and in Pennsylvania.

For the 13th year in a row, the recording, which lasts about three hours, will be played at 8:45 a.m. this morning at Cathedral of the Pines.

To mark the 20th anniversary, volunteers are also recording Pelletier’s poem “Downtown Lower Manhattan,” which he wrote after returning to New England from New York City. Pelletier said he’s contacted a variety of people — from Pete Seeger to Bello the Clown — to contribute, and that recording, along with the 2002 recitation of the victims’ names, will be given to the 9/11 Memorial Museum.

The Edge Ensemble Theater Company will also be commemorating the attacks.

At 7 p.m tonight, the company will perform “The Guys,” which tells the story of an editor helping an NYC fire captain struggling to write the eulogies of his colleagues. The play, written by Anne Nelson in the months following the attacks, is based on a true story. The performance will be hosted by Keene Public Library, and admission is free.

Mark DiPietro, who plays the fire captain, had known of the play and several months ago, suggested performing it for 9/11’s 20th anniversary, according to Director Kim Dupuis.

She said she hopes the audience will remember that while society often refers to the first responders who perished as heroes, they were also real, normal people.

“The material is beautiful, and I’m sure it’s going to resonate with a lot of people.” Dupuis said. “The idea is that ordinary people doing extraordinary things makes them heroes.”

Meanwhile, a Keene resident is quietly commemorating the anniversary with a display outside her home.

Earlier this summer, Alison Adams hung a large American flag on the side of her barn for the Fourth of July — and now she has 343 miniature flags in her yard to match it, each honoring a firefighter killed in the attacks.

The array was installed along Baker Street Friday morning with the help of six Keene firefighters, Adams said, adding that she was floored so many members of the department came out to help. She said she put out the invitation on Thursday while dropping food off at the station.

Adams has firefighters and service members in her family, and they always try to commemorate 9/11 in some way. It’s a practice that’s close to her heart, she said, and one she’s maintained the past two decades.

“I just hope people going by will see it and take a moment and remember,” she said. “It’s 20 years later, but there are people who feel it every single day.”