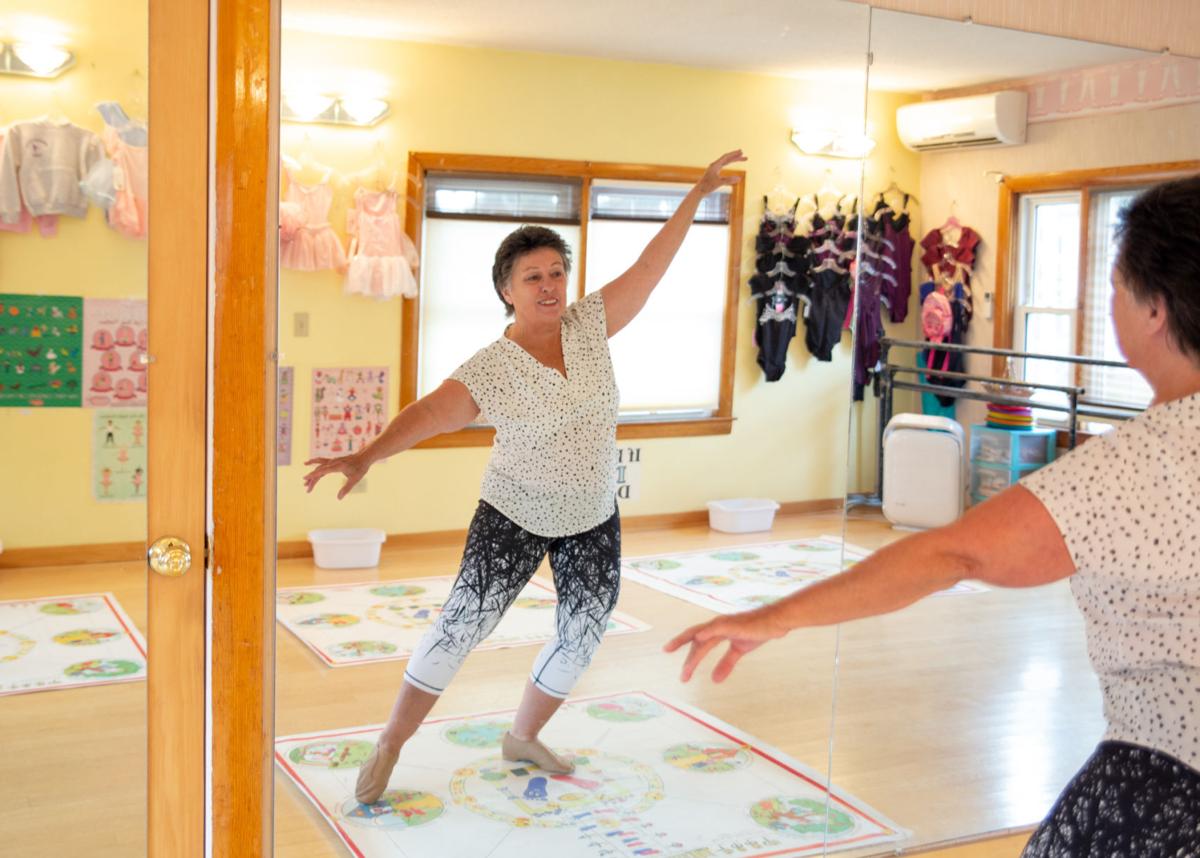 Ann Bergeron, shown in her dance studio on Roxbury Street in Keene Thursday, has taught dance for 57 years. 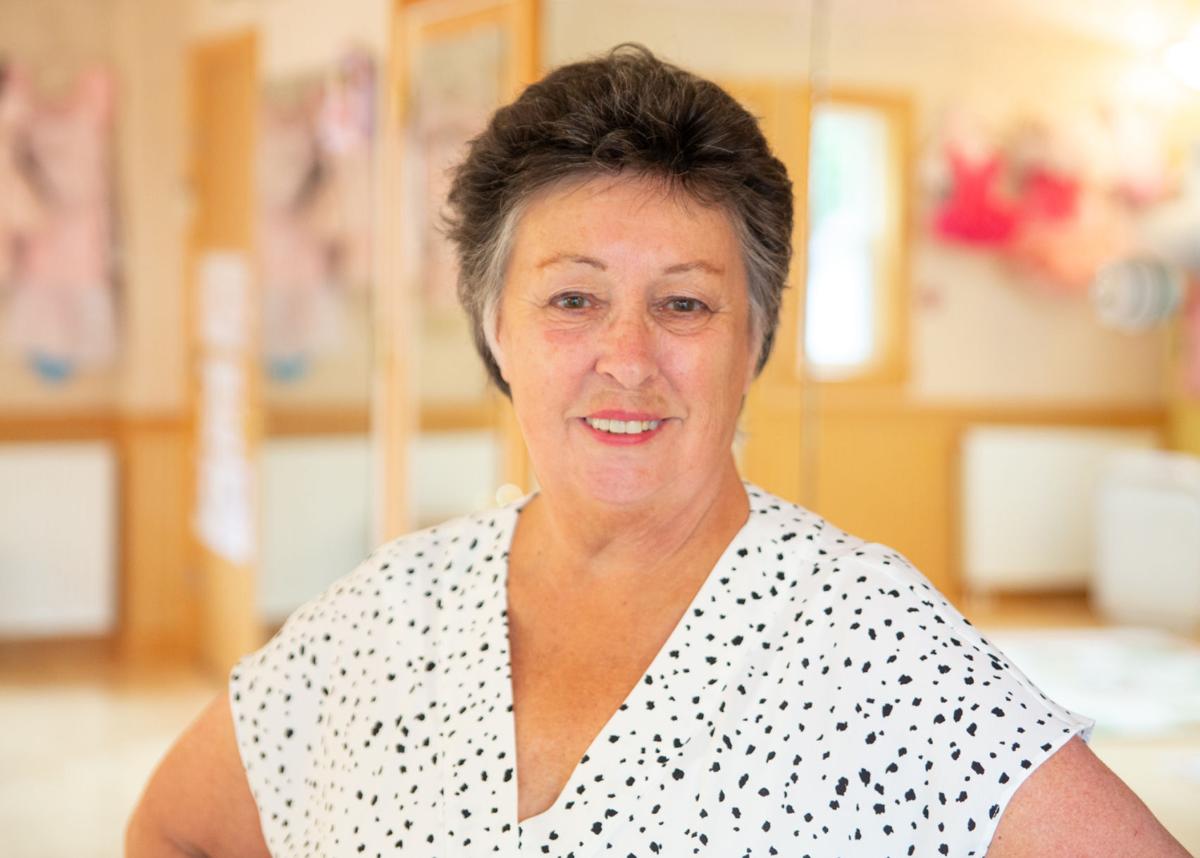 Ann Bergeron, shown in her dance studio on Roxbury Street in Keene Thursday, has taught dance for 57 years.

Ann Bergeron’s manner of locomotion can’t accurately be described as simply walking, but more gliding. She’s sure-footed yet delicate in her steps, as one might expect from someone who has taught dance for 57 years, ever since she was 13 and charged friends and neighbors a dime per lesson.

“I love dancing. I can’t be without it; it’s part of me,” says the petite and ebullient 70-year-old Keene native who runs Ann’s Studio of Dance from her home on Roxbury Street. She estimates she has instructed more than 6,000 students during her ongoing career.

Bergeron’s passion for dancing began when her mother, Patricia Bergeron, signed her up for classes at age five.

“Mom’s the one who really encouraged me,” Bergeron says. “Sunny Seymour was the dance instructor on Court Street. That’s where I went.”

Immediately, she was captivated. “Dancing was just in me.”

She continued with her lessons and diligently practiced at her home on Old Walpole Road. When she was 13, her father, Emile Bergeron, renovated their basement into a dance studio, and the young Ann began offering lessons to other girls in town.

Soon, more students enrolled in her classes — enough that she was able to choreograph her first show, at the Surry Town Hall in 1967.

“I made all the costumes, too,” she says proudly. Additional shows followed at St. Joseph’s School in Keene, and her reputation as a dance instructor grew. She had 90 students by the time she enrolled in Keene High School.

Early in their marriage, with Cody in the U.S. Air Force, Bergeron instructed students at bases first in California and then in Plattsburgh, N.Y., where her husband was stationed. The couple moved back to Keene in 1976, and that year she began teaching at what was called the Triangle Room at the old YMCA on Roxbury Street.

Later, she moved her studio to sites on West Street, Park Avenue and Cypress Street and, in 1981, to its present location.

She says she has never once tired of teaching children, teens and young adults how to dance.

“With many of the students, you can just see the joy in their faces,” she says, as kids as young as three begin to realize that movement can be so much fun. “They come in smiling, and they leave smiling.” 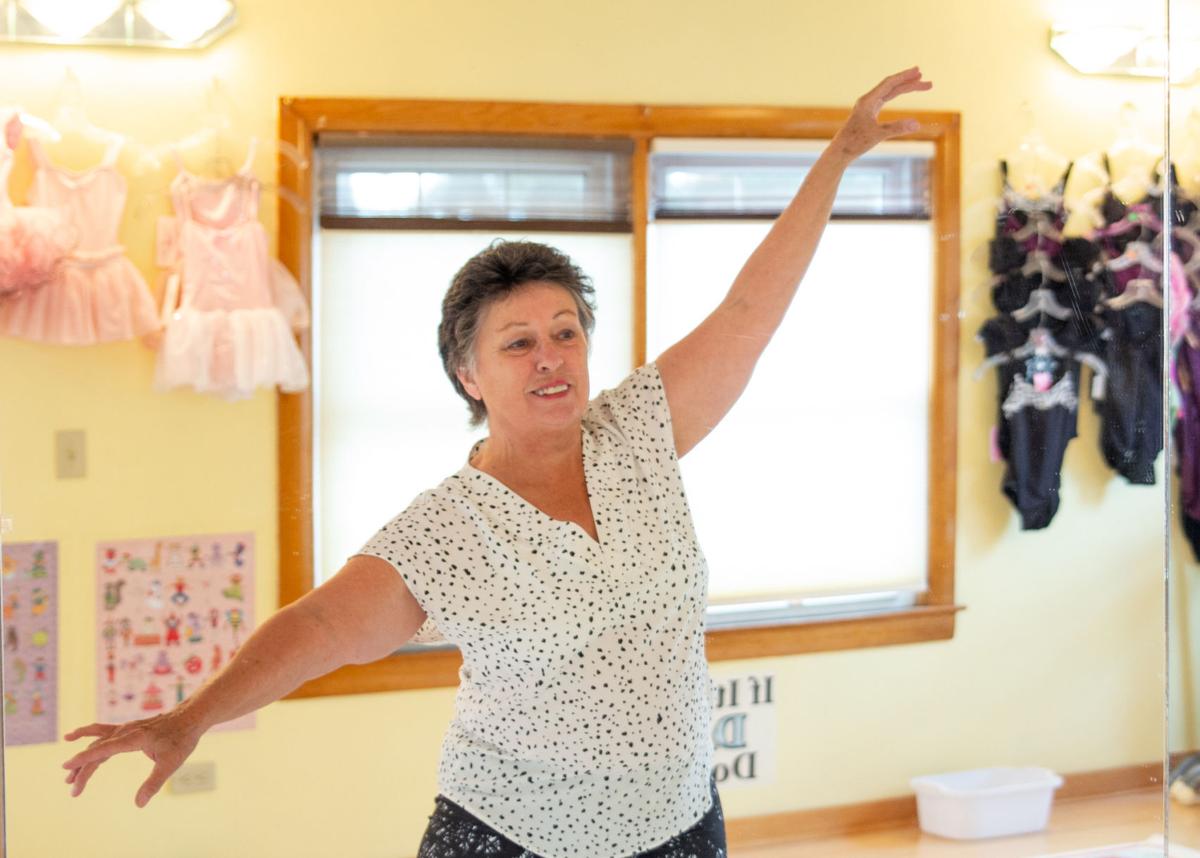 “I love dancing. I can’t be without it; it’s part of me,” said Ann Bergeron, shown here in her dance studio on Roxbury Street in Keene, just before teaching a dance lesson on Thursday. Bergeron, 70, has taught dance since she was 13. 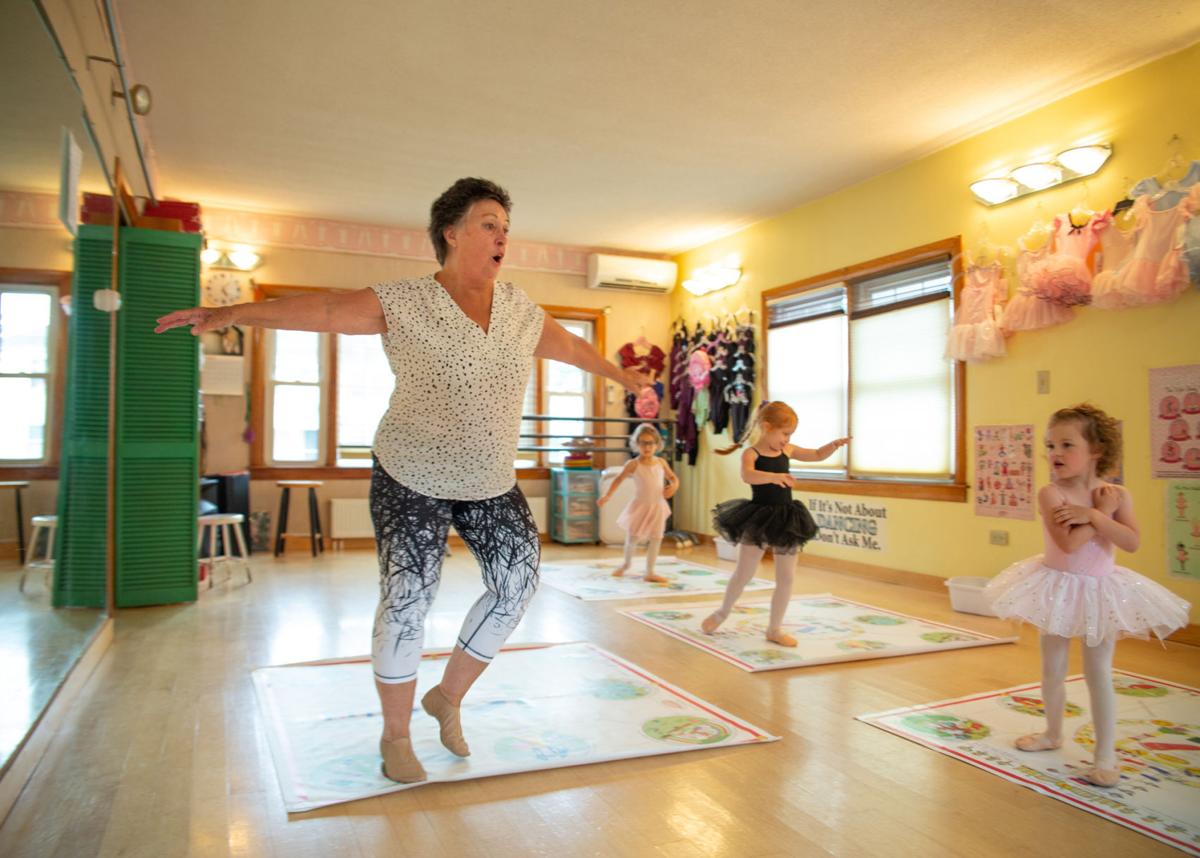 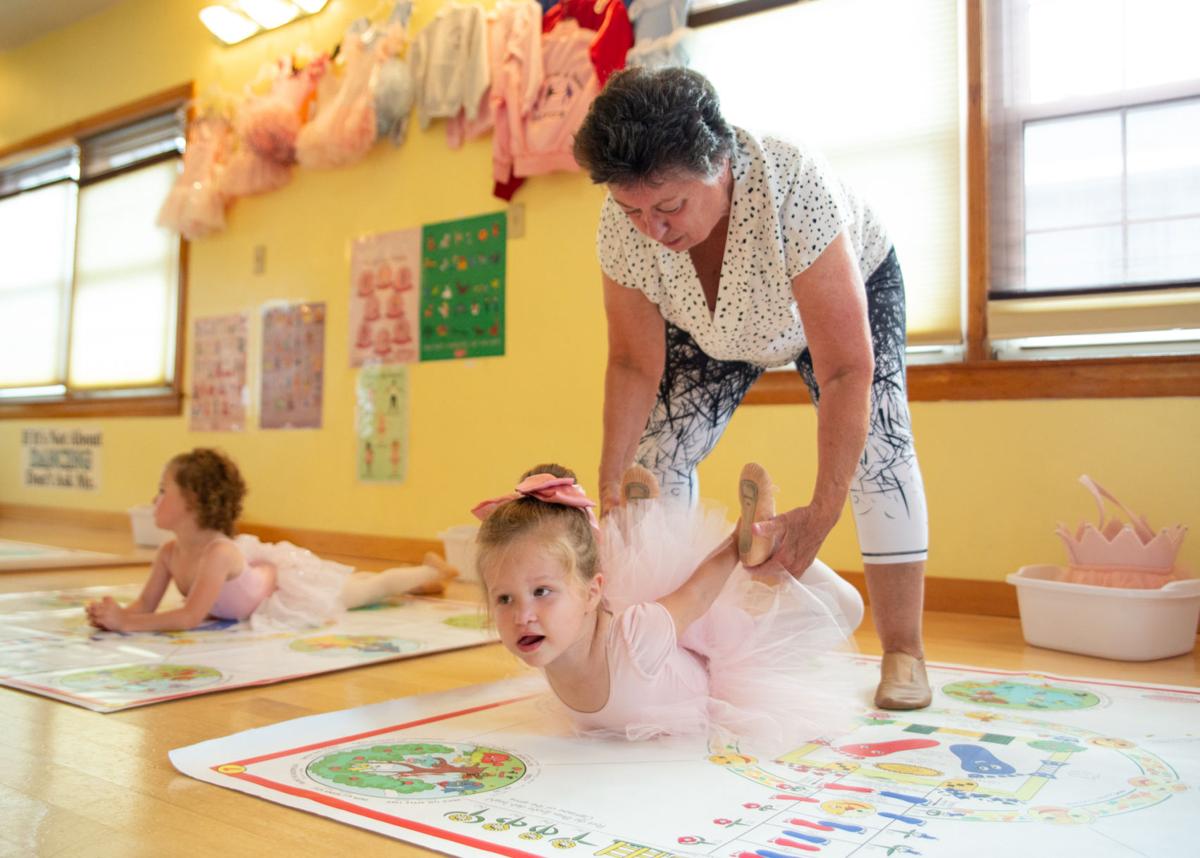 Ann Bergeron helps her student, Wynne Downton, 4, with an exercise during one of her dance classes in Keene on Thursday.

“I love dancing. I can’t be without it; it’s part of me,” said Ann Bergeron, shown here in her dance studio on Roxbury Street in Keene, just before teaching a dance lesson on Thursday. Bergeron, 70, has taught dance since she was 13.

Ann Bergeron helps her student, Wynne Downton, 4, with an exercise during one of her dance classes in Keene on Thursday.

She starts the youngest with the basics of coordinated movement, using simple floor mats with easy-to-follow images of where to place their feet.

“Kids love repetition,” she explains. “And they love to move.”

She says it’s more difficult for little boys to pick up the basics early. “They’re just not as limber. Also, girls are more focused. But the boys get just as much enjoyment out of it.”

“I’m analytical, and I like things in order, and that makes me a good teacher because lessons have to be in a progression,” she says. “Dancing is very technical. It’s about self-control of the body.”

As they grow, her students begin to learn more sophisticated movements and techniques. And, for those who stay with classes, dancing becomes a more challenging pursuit, but one with significant rewards, she says.

“It helps them build confidence. It helps them in all sports because it improves their coordination and teaches them to think fast and on their feet. It’s about muscle memory,” she says. “It’s about posture, and it’s not just about the movement of your legs,” but upper body as well.

Dancing requires intense concentration, and once a student masters that, she says, “it creates a high, like meditation.”

Bergeron teaches ballet, tap-dancing, jazz and hip-hop. Each has its own characteristics, she notes.

Ballet, especially, is very difficult because of the complex nature of the movements, she says. “It’s very mental; there are so many technical points you have to be aware of.” For example, the most advanced technique in ballet, Fouette turns, requires up to 32 pirouettes in a row, standing tip-toed on one leg. To do this, dancers must swiftly turn their head but with each rotation make sure to fix their eyes on the same stationary object.

“That’s why ballet dancers wear their hair up, so they can see,” she explains.

Dancing also requires constant practice, she says. “I can tell if someone has been practicing or not.”

Bergeron maintains her own training schedule, having attended frequent workshops and conventions throughout the years where new techniques are taught. She is certified by the Dance Masters of America in ballet, tap and jazz dancing.

Last year, she instructed 60 students, reduced somewhat by COVID. This fall she expects to enroll 70 pupils, ages three to 18, in classes four days a week, from early afternoon until 8 p.m. She also teaches dance at the Keene Senior Center.

Since she’s been teaching in the same town for so long, she’s now instructing the kids and grandchildren of former students.

Although the Monadnock Region has numerous Bergeron families, the clan to which she belongs were French-Canadian immigrants who arrived in Keene in the early 1920s. Her grandfather, Theodore Bergeron, started a construction company and among its projects was building The Colonial Theatre. Her father was a real estate agent who also raised pigs, and her mother was a homemaker. She was the eldest of three, with two younger twin brothers, Bruce and Brian, who are now deceased.

As a child, she recalls a different version of Keene. “There was nothing on Winchester Street, just a dirt road. The car dealers weren’t even there yet. We had the widest Main Street in the country, and they ruined it with that strip down the middle.” Now, she notes, while Keene’s population has remained almost identical to when she was growing up, “crime has increased,” especially thefts.

“There was a time here when nobody locked their doors.”

Still, though, she says the city remains vibrant — “a family city,” she calls it, with an especially attractive downtown, powered by the proliferation of restaurants that replaced the old retail stores.

She has no intention of slowing down or calling it quits.

“I’ll keep doing this as long as I can,” she says, pointing out the example of Georgia Deane, the 102-year-old Mendon, Mass., resident who still runs a dance studio.

“It doesn’t matter how old you get, there’s always room for growth; you always can learn and improve.”

At a glance: Ann Bergeron