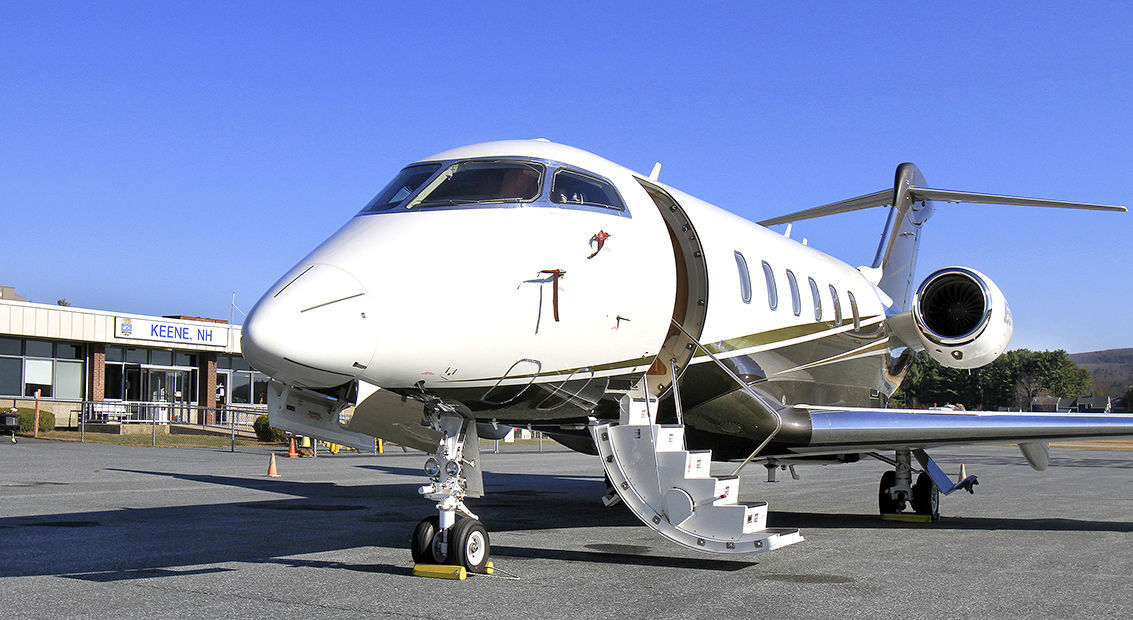 A corporate jet sits on the tarmac at Keene’s Dillant-Hopkins Airport in North Swanzey Friday morning. Local officials are eyeing bringing back some semblance of commercial air transport to the airport. 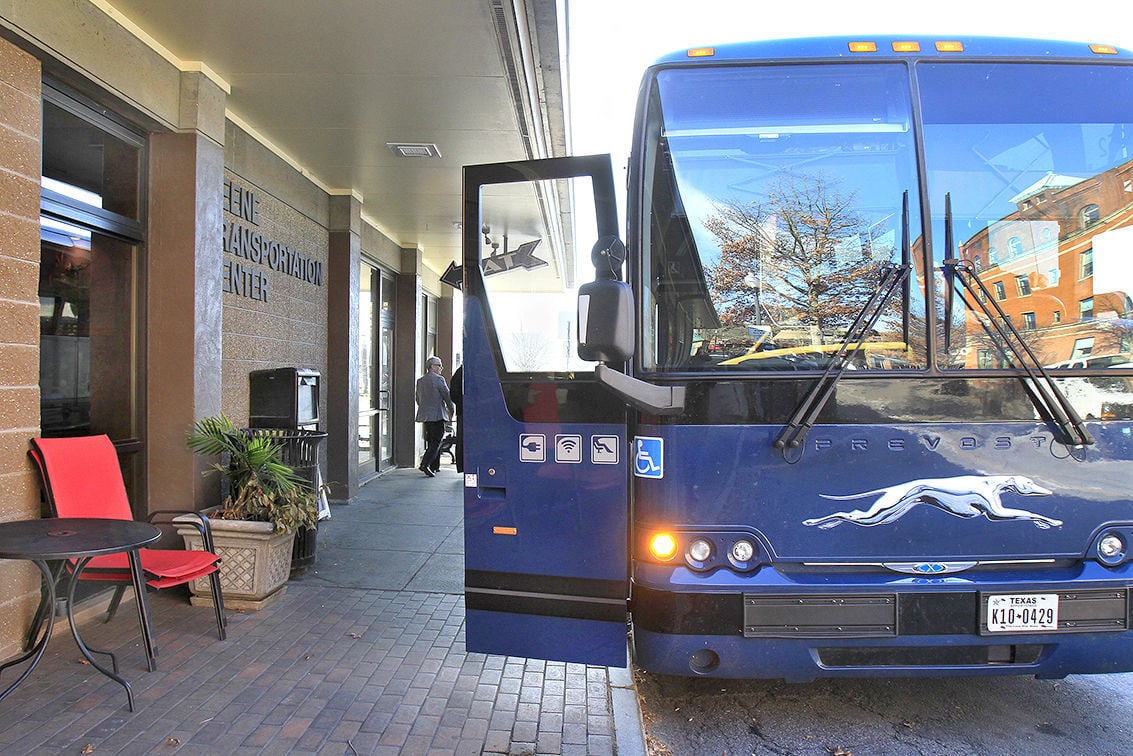 A corporate jet sits on the tarmac at Keene’s Dillant-Hopkins Airport in North Swanzey Friday morning. Local officials are eyeing bringing back some semblance of commercial air transport to the airport.

But as winter sets in, it can turn into Keene’s de facto bus station.

For anyone without a car, there is nowhere to wait for the Greyhound or City Express buses without having to buy a coffee or a froyo.

Some oblige, but that’s not an option for others.

“You’re supposed to buy something, but we have a lot of homeless people that come in here, and they just use the bathrooms,” Georgiadis said while helping an employee work out a kink in the waffle machine. “They don’t have any money to buy anything anyway, so if it’s too cold outside, they come inside and sit.”

With Yolo Cafe’s proximity to the Hundred Nights homeless shelter, not everyone coming inside necessarily has a bus to catch.

“It’s kind of rude to kick them out,” he continued. “They don’t have no place to go.”

Tucked across from Lindy’s Diner on Gilbo Avenue, Yolo takes up half of the building that used to house the city’s transportation center, remnants of which linger on with the rusted metal letters on the outer wall and a desolate waiting room still visible through the dirty windows.

Still, the Gilbo bus stop remains the most accessible public transportation offering in Keene and the Monadnock Region. And for the area to be economically competitive in the years to come, local leaders will have to offer more than a sign post with no seating or public restrooms, stakeholders say.

A recent study from the N.H. Department of Transportation showed the Granite State lagging far behind its neighbors in statewide transportation funding, highlighting the need to close a $90 million funding gap over the next 10 years to meet the basic requirements of the current population.

And with New Hampshire’s senior population on track to double between now and 2040, the state will face growing demand for public transit options as more and more people stop driving their own cars.

Transportation has a tentacle in just about every political issue in the region, yet Cheshire County is facing not only a shortage of viable public transit options, but a “transportation funding crisis,” according to J.B. Mack, the principal planner for the Southwest Region Planning Commission.

With the state gas tax merely plugging holes on an ever-growing list of road and bridge improvements, the burden to make any systemic transit improvements falls on local governments to raise their own money and try to match it with federal funds.

Already, around 20 to 22 percent of the region’s population does not drive, according to a SWRPC study Mack cited, which counts everyone from babies to seniors.

Although the community has rallied around stories such as the Serenity Center being given a car to help people in recovery from addiction get to work and receive treatment, the very nature of one-offs like that underscores the need for broader reforms.

Keene’s population of just over 20,000 anchoring the surrounding towns won’t bring a panacea better suited for a more dense population, but Mayor-elect George Hansel says transportation must be a priority for the next City Council.

“We’re gonna be looking at housing, which has been talked a lot about during the campaign, but we also need to have a serious conversation about public transportation and how people move around — not only just inside the city, but also between cities, and that connection to the Boston-Manchester area is really important,” Hansel said.

Come fly with me — if you have a car

On the macro-scale, the lack of commercial flights to the region illustrates the more tangible transportation shortcomings, with owning a car being the best way to catch a flight on time out of Manchester, Boston or Hartford.

The struggle of traveling from Keene to a major airport is one Hansel says he knows all too well. And although the city is eyeing some sort of return of commercial air to Dillant-Hopkins Airport in North Swanzey in a long-term market study, Hansel pointed to other options to make flying less of a hassle.

“I go to all three, and weirdly, Bradley [in Hartford], Boston and Manchester are all equally inconvenient at the same time,” Hansel said, chuckling, during a phone interview Wednesday.

“We need to look at really reliable bus service to one of those major airports,” he added. “And that’s something we should really be looking at and pushing for, and trying to accommodate here, because even to one of the extended train lines that have gone into Western Massachusetts now, we should be thinking of how do we create connectivity to Greenfield, and allow people to commute and work at the same time, either on a bus or a train.”

Both Hansel and Mack noted that compared to other areas of the country with a similarly light population density, the Monadnock Region has the benefit of being within two to three hours of Boston, Hartford and Albany — all of which have a host of connecting flights.

The problem, both pointed out, is that existing park-and-rides help only those who own cars.

Keene is often referred to as a hub for services and lifestyle amenities that are used by those who live in surrounding towns, but Mack questioned that notion when it comes to transit.

“Our market is really tough” when it comes to securing funding for transportation projects, Mack said of the area’s low population density. “You know, we’re sort of an island in the southwest area of the state.

“And so, although we often hear, ‘It would be great to have these services,’ ” Mack continued, “when we’ve tried to put that into action, sometimes the demand just isn’t there.”

During a recent call for federal grant proposals, Mack said the commission got only one, which was from Thomas Transportation in Swanzey.

But upon realizing federal funding would only go so far, and how minimal matching state and local funds would be, Thomas dropped its pitch for a shuttle to Boston’s airport and train station, according to company founder and President Ed Thomas.

“The [grant] funding is not really designed for a for-profit,” Thomas said, noting it takes two to three years to get any kind of business like that off the ground “because I don’t really have any funding sources other than myself.”

The future of Gilbo station

Back at the Keene bus station, two Greyhounds come into town every day, and the City Express — branded Keene’s “bus for everyone!” — rolls between grocery stores, medical providers and social service centers.

The area is the busiest around the late morning, but Georgiadis says by the time his business opens at 2 p.m., things can be pretty grim once it starts getting colder.

“The thing is that it affects my business, because these homeless people — the shelter is right across the street, so they come out all day long, and they have no place to go,” the Charlestown resident said of those who stop in with or without a bus to catch.

And the infrequent and often late buses leave those without housing little choice, Georgiadis said. He added that he lets anyone stay warm in his yogurt shop unless they start asking customers for money.

Roberta Mastrogiovanni, owner of the Corner News next door, says she feels exasperated at the lack of political action behind public transportation through the more than 20 years she has been selling Greyhound bus tickets from her store.

“We can’t be left with no public transportation,” Mastrogiovanni sighed. “I don’t really make money [as a ticket vendor], I’ll be honest, but I feel it’s my responsibility to continue to offer it.”

Hansel says a revamp of the Gilbo station will be key, and he hopes it will ride the coattails of the city’s planned arts corridor in the current expanse of parking lots flanking the street.

“I think keeping the transportation center where it is, and even building it out to be even more robust and visible in a very apparent location in the heart of downtown, is a good thing,” he said. “Because we’re gonna need [Keene State College] students to use that; we’re gonna need people living close to downtown to use that; and it seems logical to put it right in the heart of our city if we want it to naturally attract the type of activity that we need to sustain these services.”

Mack cited a study underway by the planning commission on how feasible an “intermodal transit center” would be on Gilbo Avenue. As envisioned, the facility would integrate pedestrians, bicycles and ride sharing with bus travel.

Mack said the goal would be to create “a hub, essentially, and putting Keene on the map as a place that people could visit and wouldn’t feel like they are stranded when they get here.”

Although she’s grown cynical over the years through her interactions with state and local politicians, Mastrogiovanni says maybe the recent turnover on the City Council and a new mayor is just what the doctor ordered.

“Maybe with new councilors and a new mayor, I would hope that someone would see the importance of public transportation,” she said. “Because I have ideas, I know of other modes that could potentially connect somehow ... But it’s never been a priority.”