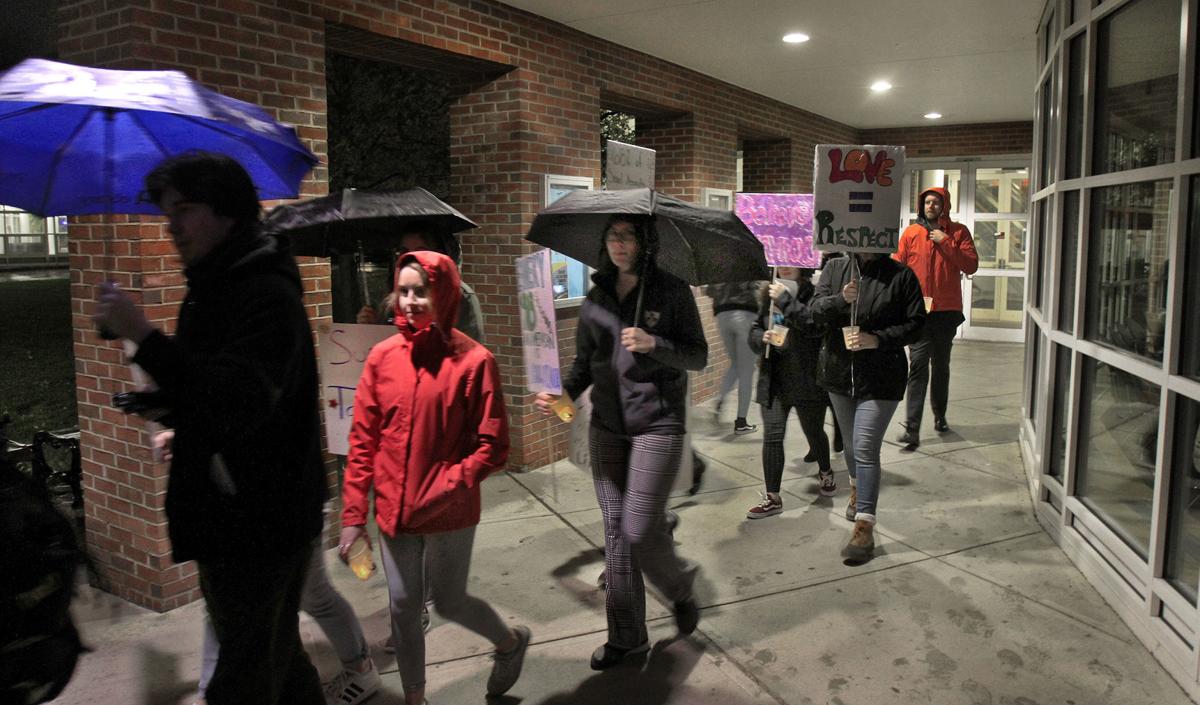 A group sets out from the Keene State College student center for the annual Take Back the Night earlier this month. 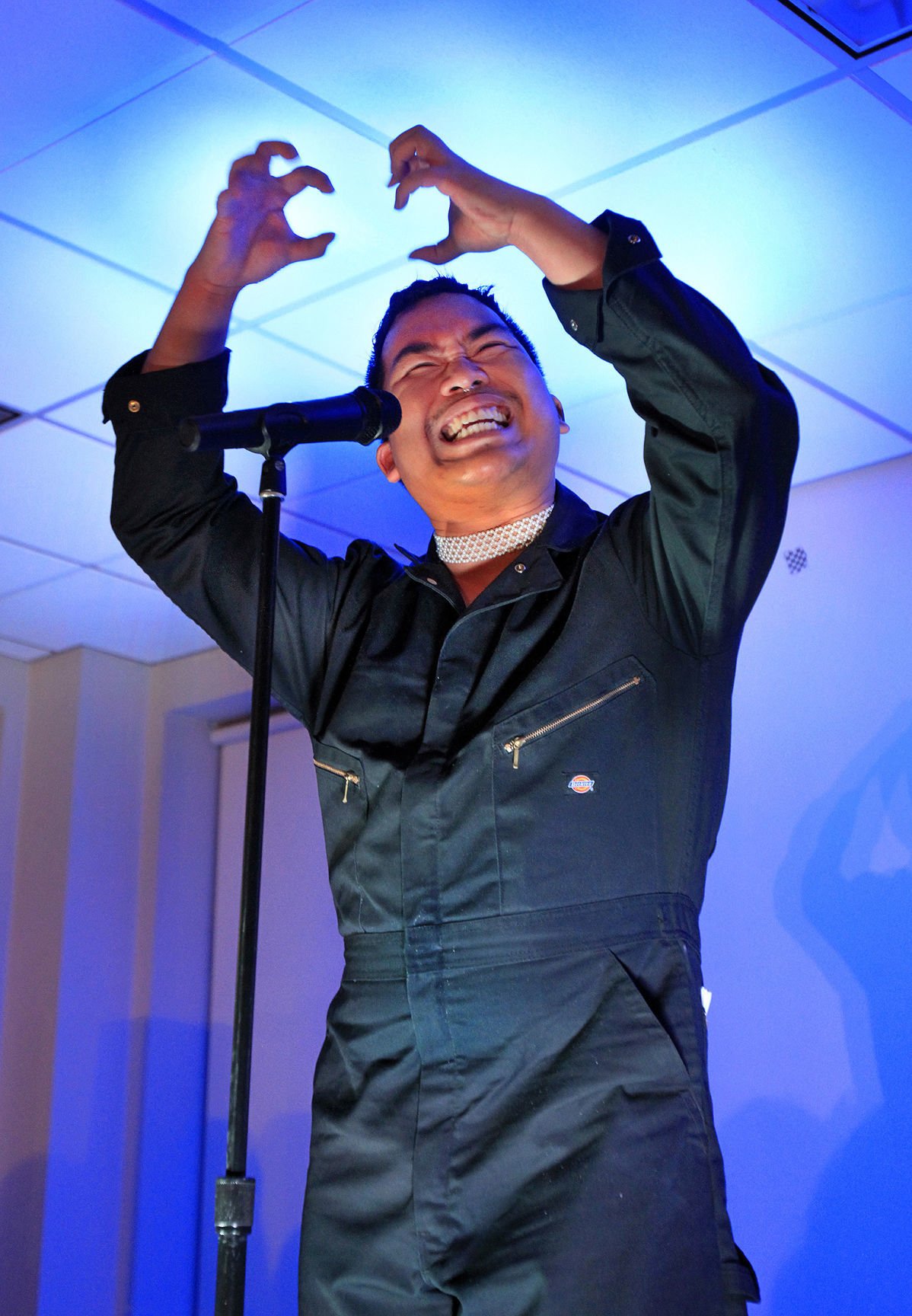 Spoken-word artist Paul Tran, who uses the pronounces they/them, recites their poems about their experiences with sexual assault. 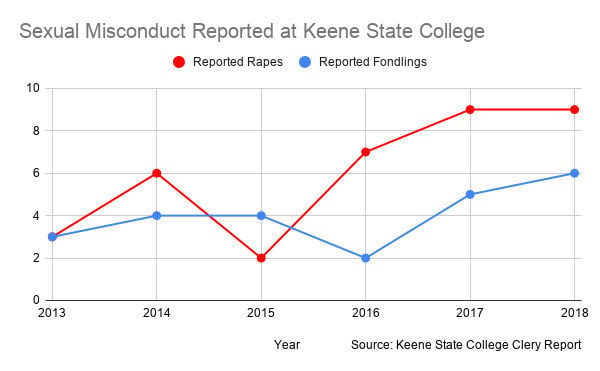 A group sets out from the Keene State College student center for the annual Take Back the Night earlier this month.

Spoken-word artist Paul Tran, who uses the pronounces they/them, recites their poems about their experiences with sexual assault.

It was a typical Saturday.

One evening last November, a Keene State College student attended a party with friends, and another student she was friendly with suggested he could walk her home. When they got to her apartment, he asked if he could crash there, so she offered him the couch or the floor.

Sometime in the middle of the night, she says she awoke to find him in her bed, on top of her, holding her head down. Not long after, she blacked out. She’s not sure whether it was her body’s response to the trauma of the experience or because she’d been drinking.

“The next day I just woke up and started hysterically crying, because I knew something horrible happened,” she said. “It felt like it was a dream almost, but I knew it happened because my body was in shock.”

That morning, she says, she told her roommate and a friend who’d also stayed the night. Their first response was, “Why did you let him sleep over?”

She didn’t really tell anyone else after that, she says. But her anxiety skyrocketed. Every time she saw her attacker on Appian Way, she recalls, her body would go into “panic mode,” but he would always say hello, almost as if he didn’t realize what he’d done. She says it took her months to process what had happened.

“I think if someone were to see the faces, like if people who were sexually assaulted on this campus, for example, all stood together — it would shock people. Shock people,” she said. “Because it would be people that you have no idea and that you interact with every day, and they’re living with this, and you just don’t know.”

She says she knew about the resources available at Keene State, such as the counseling center and Title IX office that handles sexual misconduct investigations, and she thought about reporting what had happened. But she worried if people found out, they would side with her attacker. And she says what she really wants is for the person who did this to her — and the people who didn’t take it seriously — to understand the impact of his actions.

Over recent years, sexual harassment and misconduct have increasingly captured national attention, with discussions around consent and assault amplified by high-profile cases and the growth of the #MeToo movement. On college campuses — where about 13 percent of students report experiencing nonconsensual sexual contact, according to the Association of American Universities — students and staff are advocating for education as the primary means of prevention.

Keene State is no exception — and thanks to a federal grant, the college will soon be able to expand its prevention efforts.

According to Forrest Seymour, coordinator of sexual violence prevention and education at Keene State, the school’s prevention programming is robust for a college of its size, with peer-education programs, trainings from community organizations and campus-wide events.

And though there’s potential for those programs to grow, Seymour said, Keene State typically hasn’t had the resources.

So the college applied for a federal grant through the U.S. Department of Justice’s Office on Violence Against Women, and was recently awarded nearly $300,000 to be used over three years.

Keene State is the only institution in New Hampshire, and one of only four colleges and universities in New England, to receive one of the grants during this round.

“It will allow us to do that thing that’s so hard to do in a small state school, which is to have an even more robust staffing for this program,” Seymour explained.

In the grant’s first phase, Keene State will develop a strategic plan for sexual violence prevention, working in tandem with community organizations and agencies such as local police and the Monadnock Center for Violence Prevention, according to Seymour. The funding will partially go toward hiring a new staff member to help coordinate that process.

It’s difficult to say what changes might be made to programming until the strategic plan is completed, Seymour said. But it’s likely the college will expand its peer-education program, Mentors in Violence Prevention, as well as add performances of its production “No Zebras, No Excuses,” a play about sexual violence that all incoming students are required to attend.

One of the college’s cornerstone prevention efforts is active bystander training, which aims to teach students how to recognize sexual misconduct and step in when they see it, Seymour said.

The Monadnock Center for Violence Prevention has partnered with Keene State to offer these trainings to classes, residence halls, Greek-life chapters and other campus groups, according to Prevention Educator Megan Fulton. The center also provides direct advocacy services, such as confidential counseling and crisis planning, for students who may not feel comfortable speaking to someone on campus.

“I think that there’s always more we can do both in prevention and response. I think until every student gets targeted prevention programming, whether that’s from us or from the college bringing someone in, I think that there will always be work [to do] ...” Fulton said. “And even once that’s happening, you have to keep building on that.”

Earlier this month, the Association of American Universities released the results of its latest survey on sexual misconduct on college campuses.

More than 180,000 students from 33 colleges and universities across the United States responded to the survey.

At Keene State, nine rapes were reported on campus in 2018, according to the college’s annual campus crime and fire safety report (also known as the Clery report) with all of them occurring in student housing facilities. There were also six reports of fondling — which the report defines as “touching of the private body parts of another person for the purpose of sexual gratification, without the consent of the victim” — that year.

Colleges and universities are required under federal law to collect and report this data.

But the actual incidence numbers on campus could be higher, according to Seymour. That’s because sexual misconduct is one of the most underreported crimes, with about three out of every four sexual assaults going unreported, according to the Rape, Abuse and Incest National Network.

So when the number of reported incidents rises — as it has at Keene State over the past few years, from two reported rapes in 2015 to seven in 2016 and nine in 2018 — it’s likely an indication that people are becoming more comfortable with disclosing their experiences, Seymour said.

“In the case of the sexual-misconduct-related crimes that [the Clery report] reports, we want those numbers to go up. It’s really counter-intuitive, right?” Seymour said. “But we want more reports. We know that what gets reported is just the tip of iceberg, just like in our communities.”

Take Back the Night

Paul Tran stood framed by a backdrop of hazy multicolored lights, preparing to tell a story.

“I want to tell you about the wolf,” the spoken-word artist said, launching into a poem. “How he pressed a white towel against my face. How it smelled like sugar. How all night the winter air wilted in my lungs, how my phone rang, but I couldn’t answer. He nails me down into his bed of thorns.”

A few scattered snaps and cheers of solidarity from the audience punctuated the stanzas. Many of the 50 or so faces in the crowd were solemn, listening to the poet describe “crying wolf,” only to be believed by no one.

“I guess that is my curse. To come from a colonized people never rescued. To come from survivors with no one around to believe them. Not my mother, not my father, not this man, this beast, dragging me down his wolf throat, his wolf tongue, telling me to say I like it,” Tran said. “To say his name.”

Tran spoke at Keene State earlier this month as part of the college’s annual Take Back the Night event, which aims to support and empower survivors of sexual violence by “reclaiming” spaces — such as dimly lit streets — that often make them feel unsafe. Events like this are an important part of raising awareness and reducing the stigma around reporting sexual misconduct, students at the rally said.

“I think there’s a lot of people on campus who might not even realize that they’ve been sexually assaulted,” said senior Victoria Bergström, a peer educator in Keene State’s chapter of Mentors in Violence Prevention. “And we’ve had several instances ... where there are people who deny survivors and say, ‘Oh, her story, she clearly doesn’t mean it if she’s not talking about the graphic details.’”

A few minutes after Tran’s performance, students marched outside with signs in hand, occasionally interjecting a cheer of “Go Keene State!” between chants of “Survivors unite! Take back the night!” and “ However we dress, wherever we go, yes means yes, and no means no!”

Sophomore Emma Manderville and senior Rachel Barnard led the pack, calling out different cheers as the procession snaked toward Main Street. Both are members of the school’s S.A.V.E. (Sexual Assault and Violence Education) Committee, which puts on Take Back the Night.

Their goal is to help survivors of sexual violence feel empowered to make the choice that’s right for them, they said, whether that’s seeking help outside of Keene State, reporting to the police, seeing a counselor or taking no action. Half the battle is making sure students know that those resources — both on and off campus — exist, they said.

And along with knowing their options, students want their peers who have experienced sexual misconduct to know they have support and they’re not alone, Manderville and Barnard said.

“I would just kind of stress that it’s a lot more common than anyone wants to talk about or admit. And even on your personal campuses. You may hear about it at other campuses, but chances are it’s already gone on on your campus,” Manderville said. “And I think just acknowledging that fact is a great point to start at.”

The Monadnock Center for Violence Prevention’s main office is at the former Cheshire County courthouse at 12 Court St. suite 103, in Keene, and is open Monday through Friday, 8 a.m. to 4 p.m. The number is 352-3844. The center also has a 24-hour crisis line at 352-3782 or 1-888-511-MCVP. You do not need to be in crisis to call. More information is available at https://mcvprevention.org/. Information about sexual violence prevention and intervention at Keene State College is available at https://bit.ly/2MNjY0z. The 24/7 number for the Keene State counselor on call is 358-2436. Sexual misconduct can be reported to campus safety at 358-2228, Keene police at 357-9813 (or 911), Keene State’s Title IX officer at 358-2959, or through a resident director or resident assistant.

Note: The name of the woman quoted in the first section of this story has been omitted to protect her privacy. The Sentinel does not publish the names of victims of sexual violence without their consent.