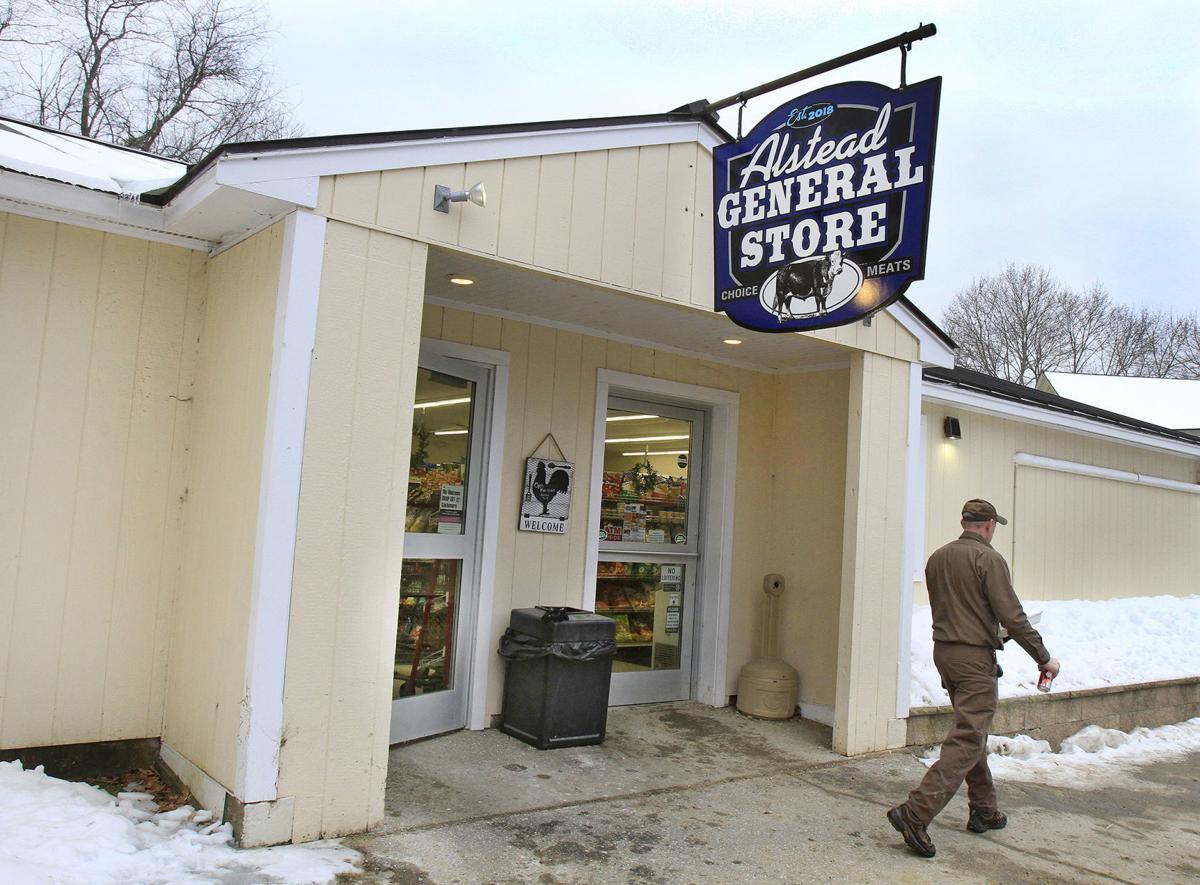 A customer exits the Alstead General Store Friday after picking up lunch. 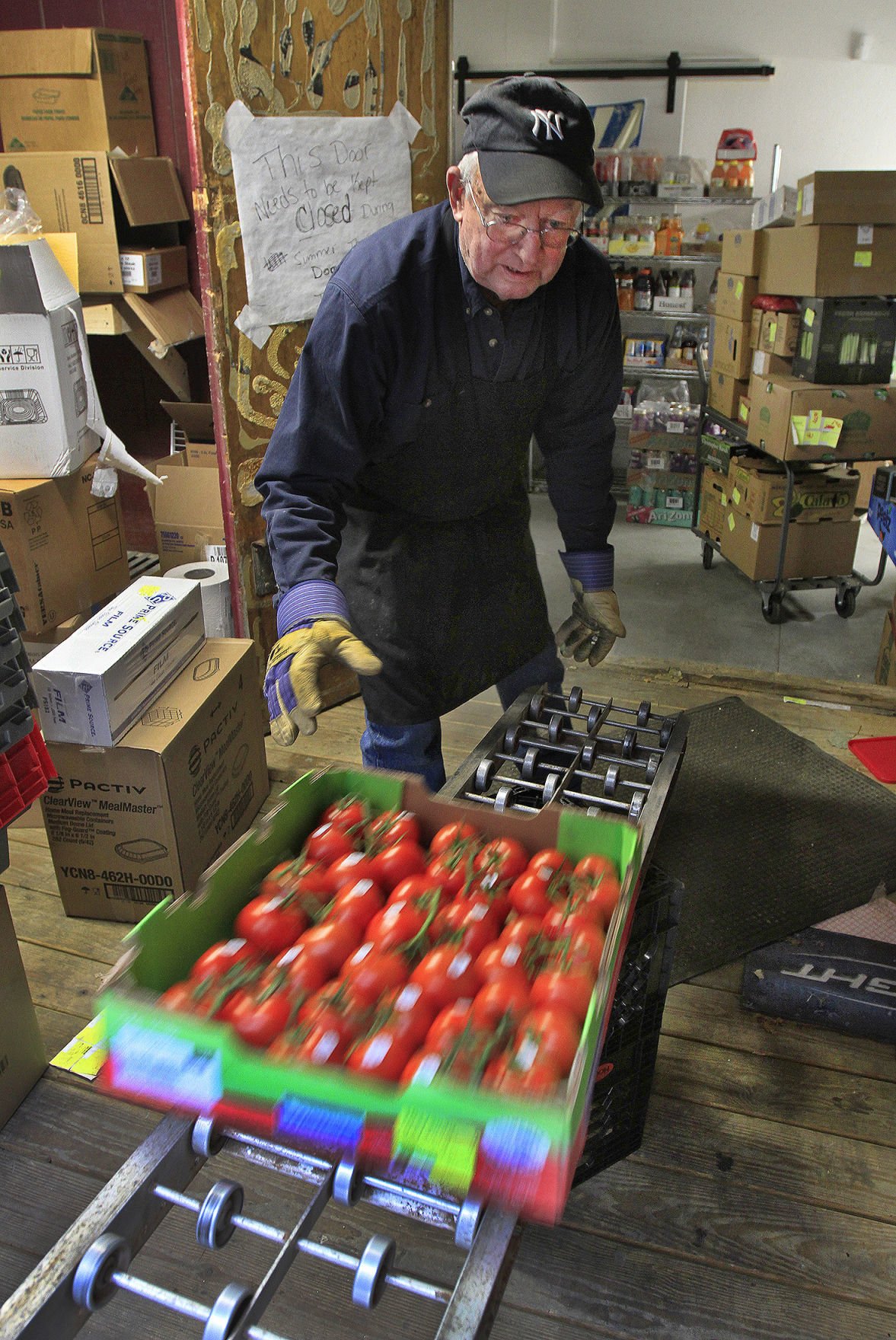 Gary Lisai receives a flat of tomatoes rolling down a conveyor from a truck at the Alstead General Store Friday. Lisai’s son is the owner of the store. 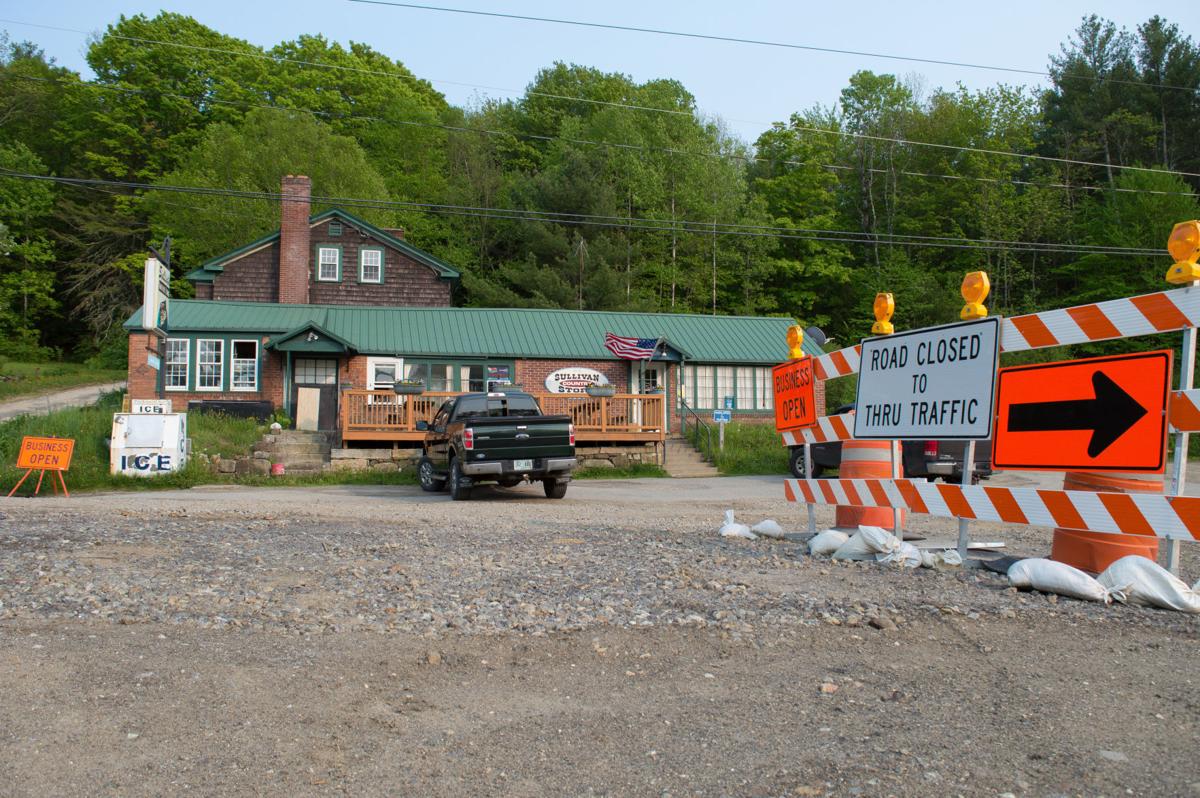 Sullivan’s Little Country Store, as seen during the Route 9 detour in spring 2019. The store has since closed its doors. 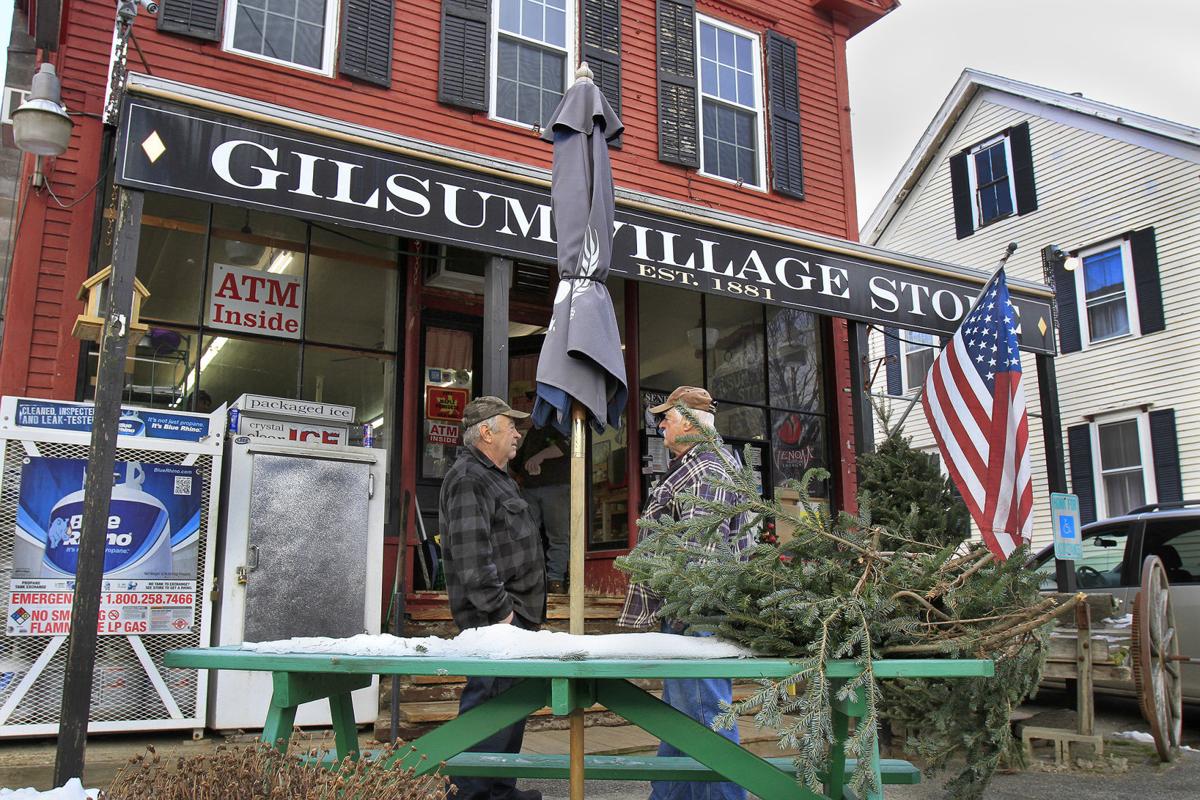 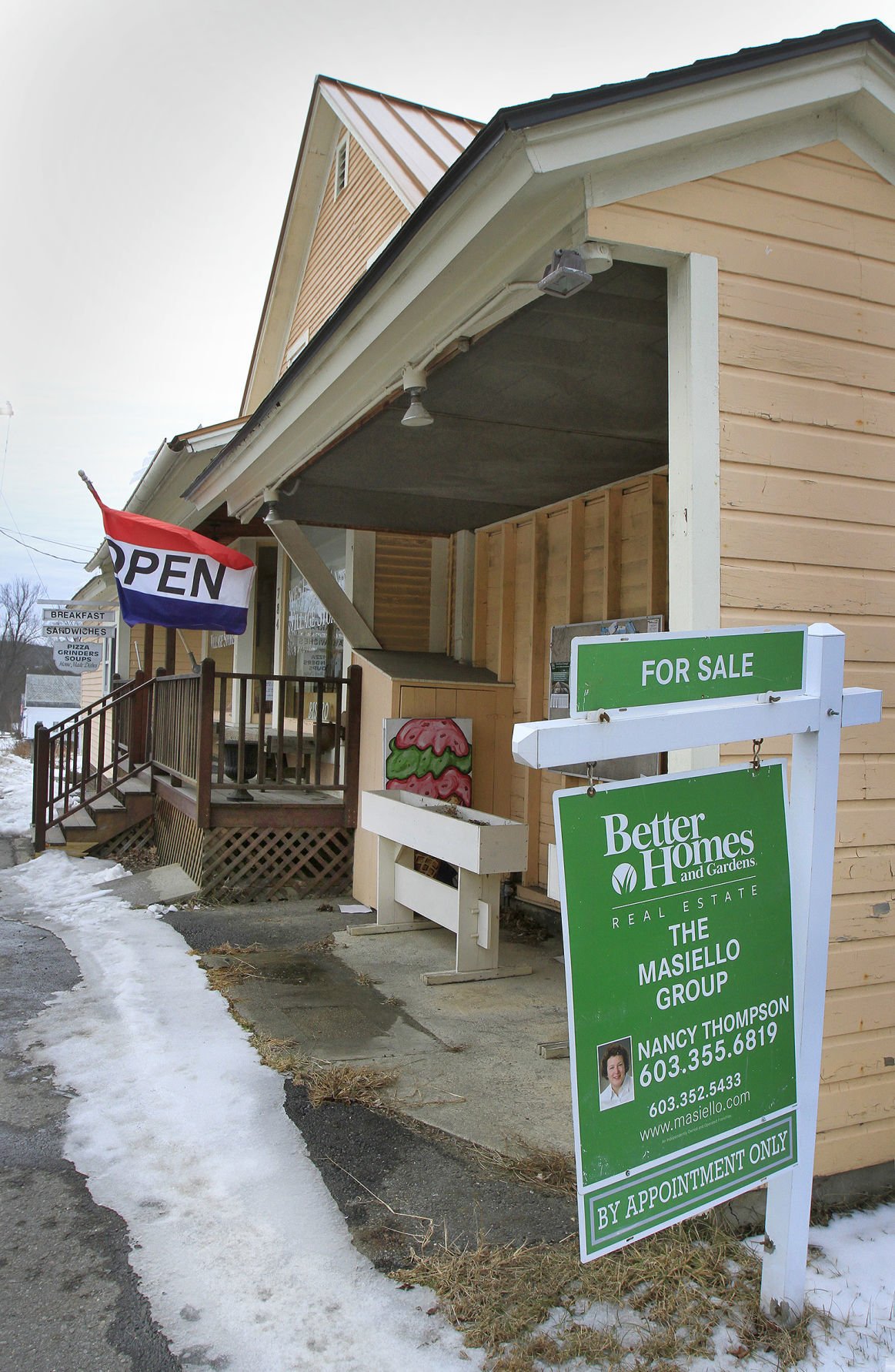 The Westmoreland Village Store, seen Friday, is for sale.

A customer exits the Alstead General Store Friday after picking up lunch.

Gary Lisai receives a flat of tomatoes rolling down a conveyor from a truck at the Alstead General Store Friday. Lisai’s son is the owner of the store.

Sullivan’s Little Country Store, as seen during the Route 9 detour in spring 2019. The store has since closed its doors.

The Westmoreland Village Store, seen Friday, is for sale.

After two general stores closed in local communities within a month of each other, area residents expressed dismay at the loss of businesses that serve myriad roles in small towns.

The Gilsum Village Store’s last day was New Year’s Eve. Raymond F. Britton bought the property in the heart of town and reopened the business in 2008, and he ran it until Jerry Gomarlo took over at the tail end of 2018, though Britton maintained ownership of the building. Gomarlo, who also owns Gomarlo’s Shop and Save Supermarket in Swanzey, declined to give a reason for the closure late last month and wasn’t reachable for comment Friday.

In late November, Sullivan’s Little Country Store shuttered after decades in business. The owner, John F. Little, cited a steep decline in customers during construction on Route 9, which detoured traffic away from his store.

Sullivan Selectman Laura Merrifield, a 25-year resident, lamented the loss of the store, which she said lived up to more than its title. Little cooked pre-made meals for customers to take home, she said, and he was famous for his doughnuts.

Businesses like his are not only a convenience to town residents by allowing them to avoid a longer trip to Keene for a few grocery items, she argued, but they also present a safer option during icy winters.

And oftentimes, these shops are the only spot to run into neighbors, Merrifield added.

“When you’re in a very small community like Sullivan, there aren’t that many gathering places. The store was really the only commercial entity in town,” she said. Libraries can act as a public space to convene, but “is that a replacement? Not necessarily.”

Merrifield also acknowledged, however, how difficult the competition must be “when you can go to Aldi’s and get a half a gallon of milk for 90 cents.”

Gilsum Selectman Tim May said losing his town’s village store is a shame, noting its role as a vendor of locally made goods for travelers to take home. It’s always been popular during Gilsum’s annual rock swap, he said.

Like Merrifield, though, he also recognized the challenges in keeping these “true country stores” alive.

“It’s much easier to be on the sidelines complaining about it or wishing it was still here, but to get people involved is another thing,” May said.

He pointed to the model of the Acworth Village Store, as many people did during these discussions, and wondered if that might be a viable solution for other stores like it.

The town’s historical society owns the building, and a nonprofit group, the Acworth Community Project, runs the 155-year-old business. When the store took a hit in 2018 during nearby bridge construction, residents pitched in and contributed $10,000 to help recuperate the losses.

In other towns, such businesses have found success by filling a void left in the wake of other closures. Nearly a year after the Alstead Village Market on Mechanic Street shuttered, the Alstead General Store opened in the same space in mid-2018 with a social media audience that followed every step of its progress.

Bobbie T. Wilson has lived in Alstead for just over 22 years.

“You’re talking to somebody who really believes in shopping local,” she said.

She’s a lieutenant emergency medical technician with the town’s ambulance department and also runs a community Facebook page that shares news and events in the Fall Mountain area.

Shunning big-box stores and online retail, Wilson’s mission is supporting area businesses and encouraging her friends and neighbors to do the same. She stressed the importance of spending money at the places that give back to their towns, both in local taxes and philanthropy. It may cost more, she said, but buying even one or two items at the nearby general store helps.

Wilson said many of these mom-and-pop shops thrive when they find their niche. The Alstead store has excelled in adapting to its customers’ needs, she added, and has adjusted its offerings based on feedback.

Britton, who ran the Gilsum store for 10 years, echoed many of the sentiments others shared about country stores’ benefits, as well as the barriers to keeping them open. Though he loved the business and enjoyed seeing so many faces come through the door, Britton said it was time to hand over the reins.

He declined to discuss the specifics of his arrangement with Gomarlo but said the closure was unexpected.

The store’s absence affects Gilsum, of course, but also surrounding communities that don’t have their own equivalent business, Britton noted.

“I want to make sure the community is taken care of, and it’s just really sad, especially for my Marlow friends. Now they have to travel quite a ways to get a gallon of milk,” he said.

The pull isn’t just the convenience, he added, “because at the end of the day you can go to Keene and get things cheaper.” Britton touted village stores as “the heart of the community” where people can congregate and get informed about town goings-on.

A former Gilsum selectman, he said he always made information about town government and area events accessible when he ran the store, and he wasn’t alone in that goal. In Sullivan, Merrifield said Little offered the same service to his customers.

Referencing state efforts to protect covered bridges and historic barns, Britton wondered if there could be a similar program for country stores, such as a tax break, to preserve this piece of New England culture.

As for the Gilsum store, Britton said he’s in the process of trying to get a tenant in the space.

“In the back of my mind I still think about reopening it for myself, but I’m not there yet,” he said. “I’m hoping to find someone who has interest in my town and wants to be there.”