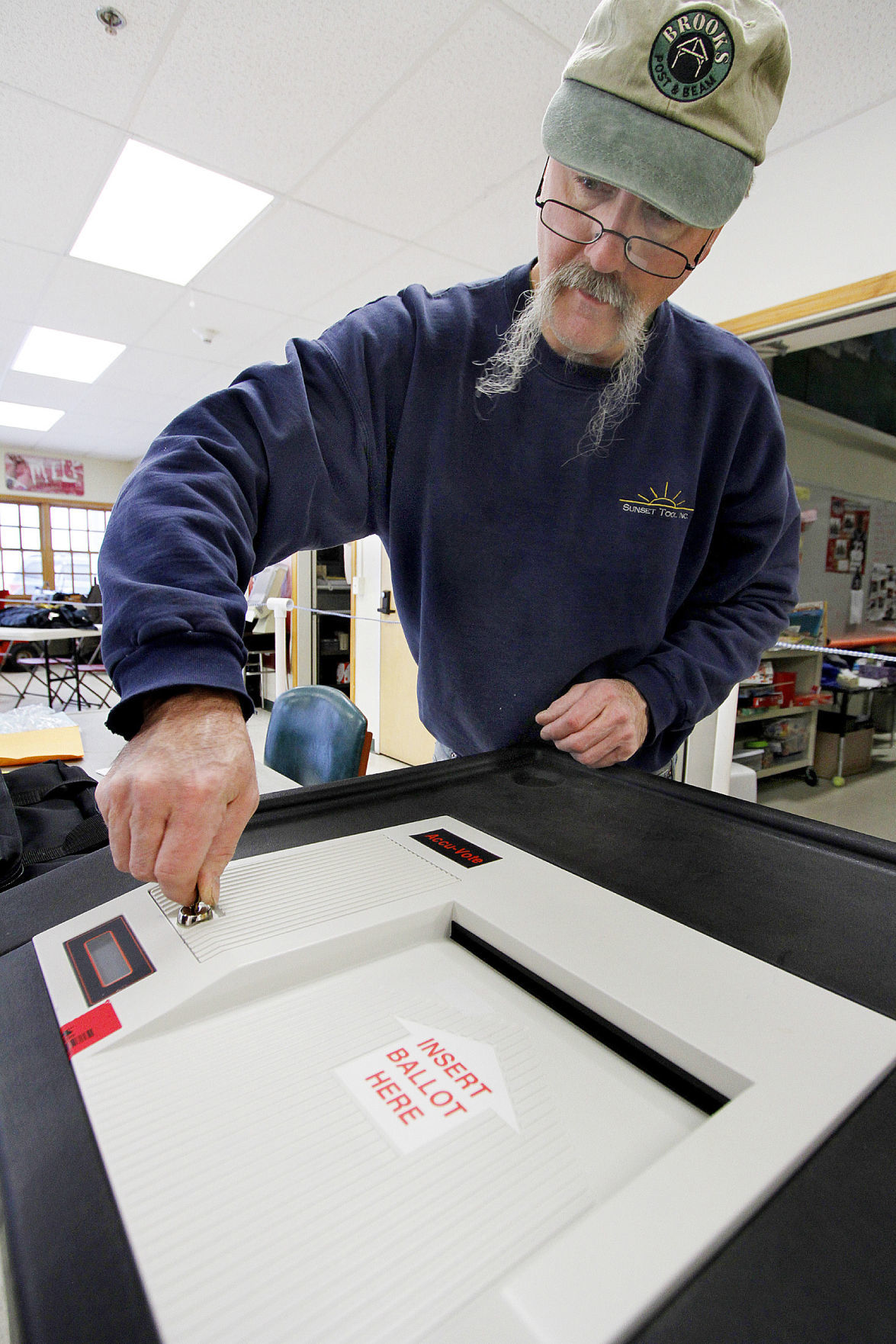 Gilsum Selectman Tim May unlocks a compartment on the ballot box on town election day morning in March of 2017. He and fellow selectmen were boning up on the workings of the box before opening the polls in the afternoon. 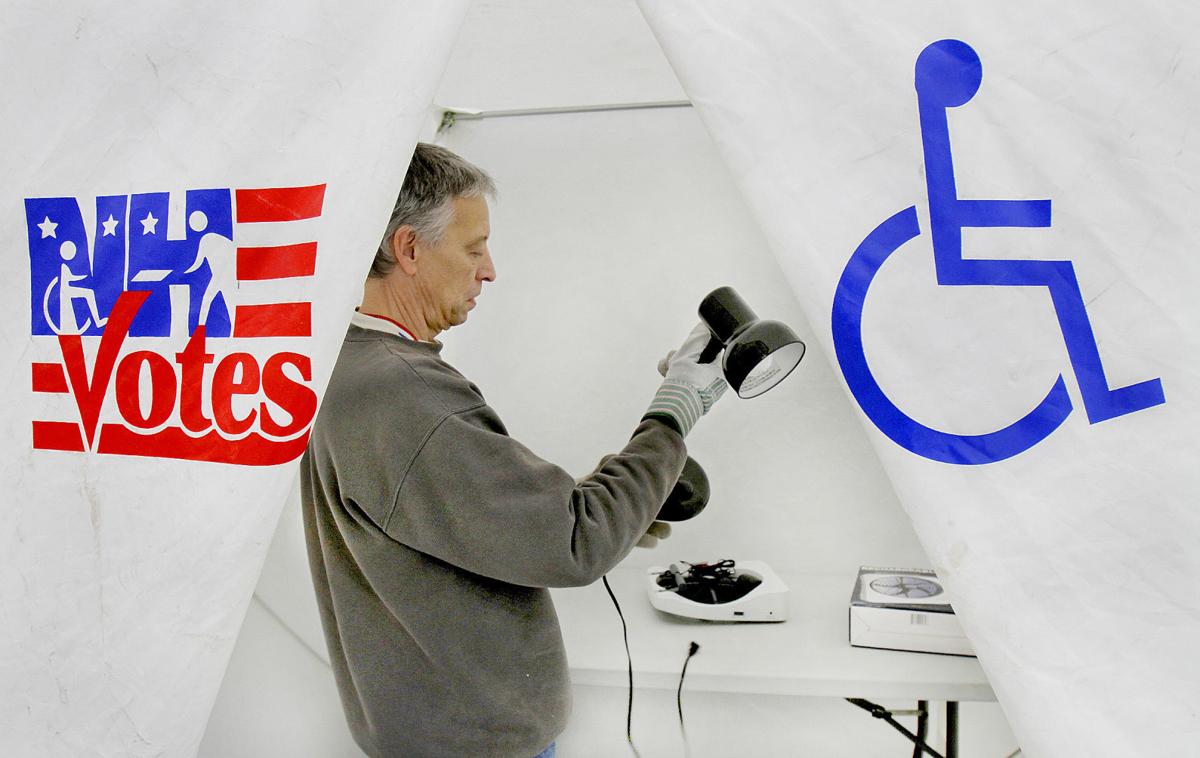 Matt O’Brien, working for the city of Keene, sets up the Ward 1 polling place the day before voting in November of 2015. Here, he equips the booth for voters with disabilities with a light and fan.

Gilsum Selectman Tim May unlocks a compartment on the ballot box on town election day morning in March of 2017. He and fellow selectmen were boning up on the workings of the box before opening the polls in the afternoon.

Matt O’Brien, working for the city of Keene, sets up the Ward 1 polling place the day before voting in November of 2015. Here, he equips the booth for voters with disabilities with a light and fan.

At a 2018 “hackathon” in Florida, an 11-year-old was able to electronically break into a replica of the Sunshine State’s voter rolls in a matter of minutes, changing names and even election tallies. Legislation that would give states a total of $1 billion to require backup paper ballots in precincts nationwide — to be used alongside electronic machines to ensure an accurate recount if those machines are hacked — has been stalled in Washington by the Republican majority in the U.S. Senate.

With each state using different election laws under the hyper-localized American system, the election security landscape remains complicated in the first general-election year since the Russian meddling efforts. An early test of voter confidence will come in the Granite State’s first-in-the-nation primary next month.

In New Hampshire, “You can’t hack paper” has become a mantra among proponents of the state’s paper ballot system, despite the proven ability to hack or tamper with the machines that count those ballots.

Secretary of State William Gardner — who has held the position for more than 43 years and earned the moniker “The Guardian” of the first-in-the-nation primary — has resisted efforts from fellow Democrats in the Legislature to enact automatic voter registration and to make overall electronic upgrades to the Granite State’s election systems.

Gardner, 71, has touted the resilience of conventional ballot boxes in many towns across the state, and, ever since the outset of special counsel Robert Mueller’s investigation into Russian interference in the 2016 presidential race, bragged about the security of New Hampshire’s elections.

Even among the larger towns and cities in New Hampshire that use machines to tally paper ballots, Gardner has insisted the machines cannot be hacked because they are not connected to the Internet.

However, for longtime voting rights and election security activists such as Deborah Sumner of Jaffrey, much more could be done to instill confidence among Granite Staters, and she claims Gardner isn’t helping.

“Now, we don’t have any network connections that we use at the local level. However, the vendor that collects the programming for the local elections is connected to a network, is connected to an election management system,” Sumner, 71, told The Sentinel of how machines can be tampered with even without an Internet connection at a given polling place. “The people who know how to do it — and they’ve had a lot of time and practice — what you have to do is make sure you’re protecting against all the risks.”

Sumner said a more sensible way to help ensure trust would be to use a more rigorous auditing system to check the machines, such as controlling for different factors and randomizing which machine in a precinct gets tested at any given time to avoid cheating. At the bare minimum, she said, a town moderator should be allowed to take a look under the hood and audit a machine if any results look funky.

According to Sumner and independent assessments, the biggest vulnerability with the machines lies in the memory card, which can be tampered with upon a technician’s visit or unsupervised access regardless of whether there’s an Internet connection.

Keene City Clerk Patricia Little said the Elm City’s machines — which date to 1993 — are locked in a vault for most of the year, and when a technician from LHS Associates in Derry comes by for maintenance annually, their activity is logged and accounted for by at least two witnesses. The same system is used whenever Little or a staff member accesses the vault, she said.

Next Friday, Little will hold a typical pre-election audit of the machines, which will be open to the public in the City Council chambers. Under state law, observers from both major political parties and anyone else representing someone on the ballot can attend the test conducted by the clerk.

For the test, mock ballots for Feb. 11’s primary will be entered into the machine with every marking possible for how someone could vote. The machine tallies them up, and the results are compared with a manual count by all parties involved before being sent to the Secretary of State’s Office as an official record.

Little, the city’s longtime clerk, said the test results may surprise outside observers.

“It runs very smoothly,” she said. “If there ever is a discrepancy between the tabulator and a hand count, it’s our hand count that’s wrong.”

While Little said she’s never had any issues with Gardner, Sumner points to correspondence between the Secretary of State’s Office and Derry Moderator Mary Till — who reportedly planned to conduct audit hand counts of the town’s machines after the 2016 state party primaries — where she was told “there is no statutory authority for you to conduct such an exercise.”

Sumner argues Gardner’s office has a pattern of undermining the authority of local officials regarding election security, preferring to stick strictly to the secretary of state recount procedures instead.

Under New Hampshire law, any candidate who receives votes can request a recount if they are within a 20 percent margin of the victor.

Campaigns get to pick an observer to watch secretary of state officials pour over the ballots, and can flag any jiggery-pokery from opponents to the state observers to start the count over again.

In a phone interview with The Sentinel, Gardner pointed to the pre-election audits and the reliability of state recounts as proper safeguards.

“People use the word ‘audit’ around the country in different contexts,” Gardner said. “There’s a lot of what someone calls an audit in what we call a recount, so the town or city clerk are supposed to preserve the memory card at each election so that that is available after a recount. We do our recounts by hand.”

Allowing moderators and clerks to oversee post-election audits would present a potential conflict of interest, he argued, given that they vote in the same precinct and could potentially be up for re-election.

“The people conducting the election all have skin in the game,” Gardner said. “They’re all people that actually vote in that polling place.”

For Sumner, all that matters ultimately is whether the public trusts the Granite State’s electoral process, and she says clearer guidance with updated protocols for auditing the machines would go a long way.

For example, in Connecticut, where the same generation of AccuVote machines are used as in Keene, any race ending in a margin within 0.5 percent triggers an automatic recount because of how the machine typically undercounts ballots due to human error in marking them or failing to follow instructions.

No such protocol is on the books in New Hampshire, even though the 2,736-vote difference between Donald Trump and Hillary Clinton in 2016 fell within that margin.

“It’s not that people are crooked,” Sumner said. “They just make mistakes.”

Little said that even if someone were to bypass all of the safety checks involved in accessing the machines in the vault and mess with or disguise the pre-election audit, a statewide recount would be required to fully assess the scale of the tampering.

Gardner agreed, and said that, in the worst-case scenario, a statewide recount for the upcoming primary would take three weeks. The Secretary of State’s Office has done them before, such as in 2008 at the request of then-Democratic presidential candidate Dennis Kucinich.

That recount, coupled with the activism of Dublin’s Doris “Granny D” Haddock for public funding of elections, is what Sumner said got her started as a voting-rights watchdog.

Sumner said she could imagine a low-performing candidate with an incentive to delay the results of the primary could take advantage of the cumbersome statewide recount process, which is prone to accusations from competing campaigns alleging improper handling of ballots, resulting in multiple restarts. But that possibility is nowhere close to her top concerns.

He recalled coming out against a faulty punch-card system in Hanover back in 1986 — which had the same issue with “hanging chads” that would later wreak havoc on the 2000 presidential election in Florida — and how the same criticism of him being too old-fashioned about voting regulations came around again when he nearly lost his seat in December 2018 to former Executive Councilor Colin Van Ostern. Gardner won by just four votes in the Legislature.

“The Hanover selectman [in favor of punch cards] was so mad at me; they said I was not modern — the same type of stuff that was said about me by Van Ostern, it was said about me then,” Gardner said. “They said, ‘This is technology, this is the future, this is’ — and, you know, they mouthed off to the press about it and said that, ‘Why is he able to successfully prevent us from having this? This technology is OK.’ ”

Gardner insisted whatever “horse and buggy” criticism is leveled toward him, it does not change his calculus and philosophy.

“It puts in perspective,” he said, “that modernity is not always right.”