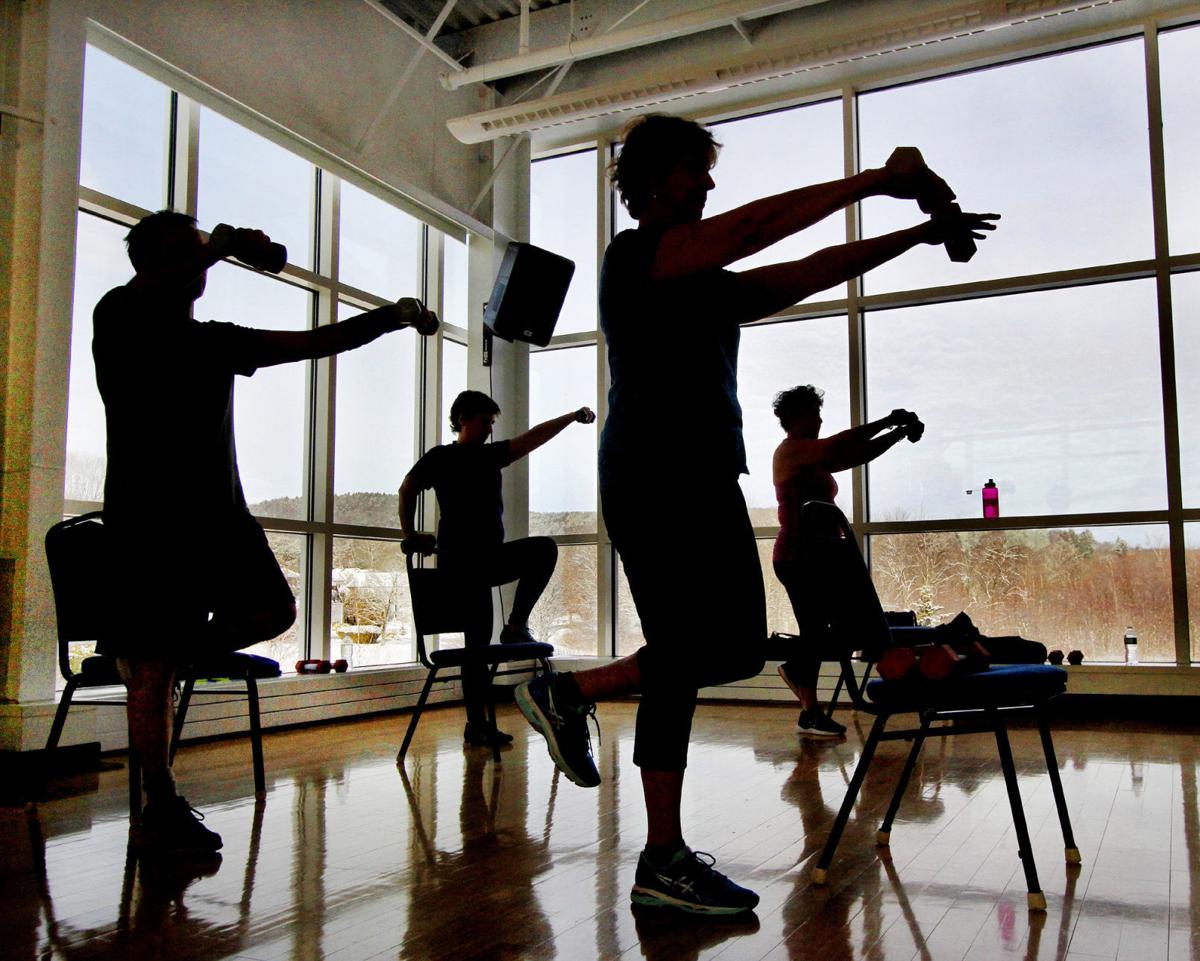 Participants in a Keene Family YMCA aerobics class, shown in this file photo, work through an exercise. 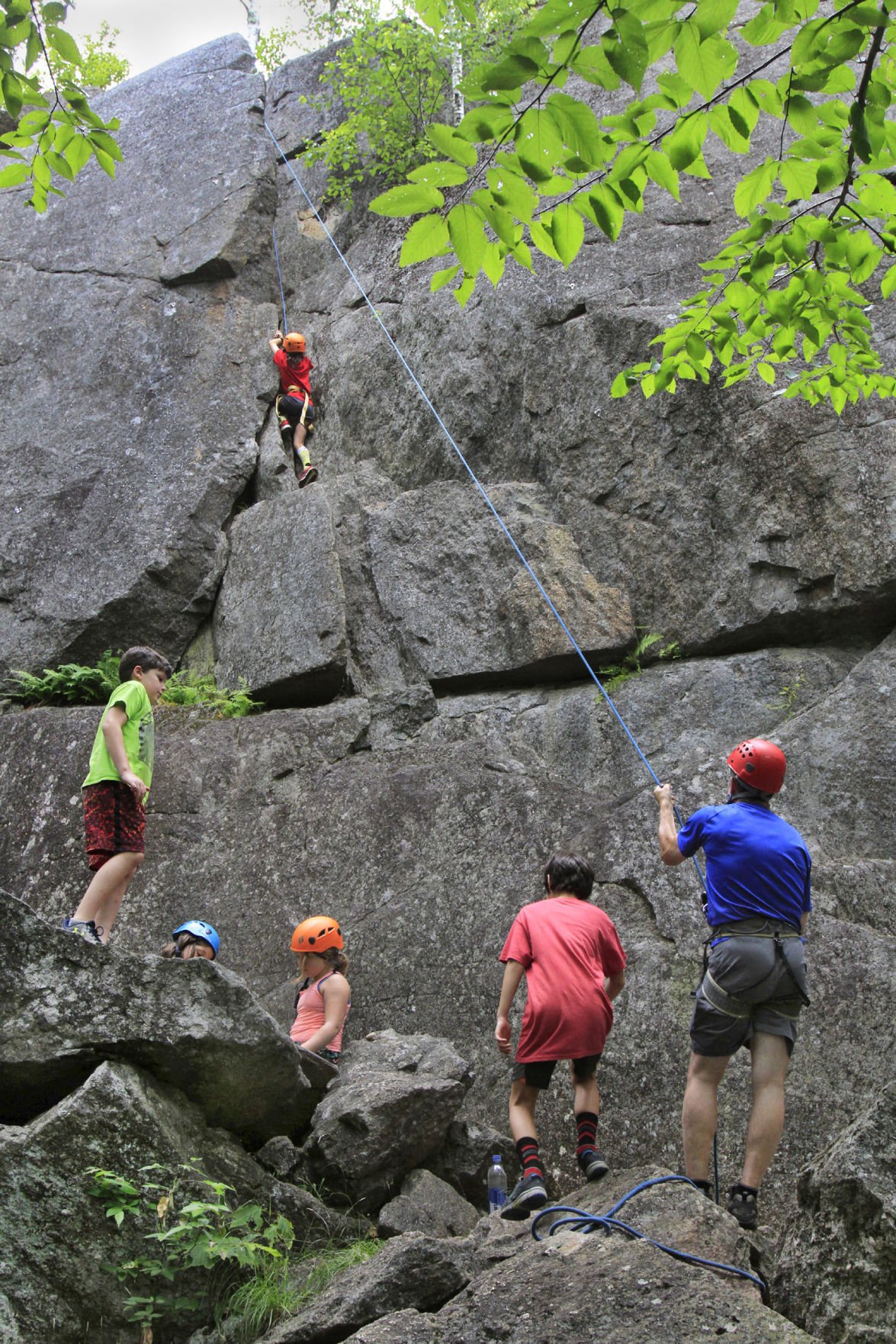 The Keene Family YMCA’s Peter Sebert, right, belays a young rock climber on the Marlow Profile during a group outing last summer. “One of the key factors [in a community’s health] is having as many people as possible have access to health-related and social-community activities,” Sebert, the Y’s senior program director, said. “That’s one big thing the Y tries to do across the board.”

Participants in a Keene Family YMCA aerobics class, shown in this file photo, work through an exercise.

The Keene Family YMCA’s Peter Sebert, right, belays a young rock climber on the Marlow Profile during a group outing last summer. “One of the key factors [in a community’s health] is having as many people as possible have access to health-related and social-community activities,” Sebert, the Y’s senior program director, said. “That’s one big thing the Y tries to do across the board.”

In 2007, Cheshire Medical Center launched an ambitious initiative to make the Monadnock Region the healthiest community in the nation by 2020. And though Vision 2020 — now known as Healthy Monadnock — later shifted away from this deadline, it still prompts the question: How healthy are we now?

Within New Hampshire, Cheshire County is about middle of the pack, according to annual reports from the Robert Wood Johnson Foundation and the University of Wisconsin Population Health Institute.

Cheshire County has hovered in the center of the state’s 10 counties in these health rankings — which compare indicators ranging from physical inactivity to teen birth rates — since the annual report’s start in 2011.

In particular, the county has work to do in areas around adult tobacco use and obesity rates, the 2019 report states.

But becoming a healthier community is no longer about just physical determinants, according to local experts. Social factors, such as affordable housing and transportation, are now recognized as playing a significant role in a person’s overall health.

Reliable transportation, for example, can affect access to health care services; without it, people might delay or miss medical appointments, resulting in poorer health outcomes, according to the American Hospital Association.

Appreciating how important these social factors are is where the county stands above the crowd, according to one of Healthy Monadnock’s leadership council representatives, Shawn LaFrance.

“This part of the state has always been so far ahead of the others in terms of this idea of health and well-being being more than just the hospital, and being inclusive of other variables,” LaFrance, who is vice president of population health and health system integration at Cheshire Medical, said.

With prevention rather than just treatment in mind, the Monadnock Region is trying to home in on what causes health problems in the first place.

“What we’re doing now is getting people on board to understand this kind of work and health,” LaFrance said.

Since 2017, Healthy Monadnock has focused on six priorities for the region: behavioral health, substance misuse, tobacco use, access to healthy food and active living, emergency preparedness and health care access.

The organization — funded through donations and grants — consists of leadership representatives from the public and private sectors, including schools, human services agencies, health care organizations and businesses.

And over the past few years, Healthy Monadnock has not just been telling residents to eat healthy and exercise, but working to ensure they have the options to do so.

“It’s about making sure that healthy foods are really available and financially affordable for people [and] that the ability to get in your physical activity — whether it’s steps or riding a bike — can actually be done safely,” LaFrance said.

According to the latest assessment, there are now more than 13 places in the region where people can use Supplemental Nutrition Assistance Program (SNAP) benefits to purchase local produce at farm stands, farmers markets and through community-supported-agriculture shares.

Efforts are also underway at area workplaces and schools to help improve food-access systems on site, the assessment states.

Peter Sebert, senior program director at the Keene Family YMCA, said having resources such as these is a crucial part of a community’s health.

“One of the key factors is having as many people as possible have access to health-related and social-community activities,” he said. “That’s one big thing the Y tries to do across the board.”

Sebert added it’s also necessary to have activities available for the entire community. The Y — which is part of Healthy Monadnock — has programs for kids, teenagers, working parents, seniors and people with disabilities, he said.

The organization is also one of the area’s largest childcare providers and recently launched a coalition to tackle youth substance misuse in Keene and Swanzey.

While the region has made strides to become a healthier community, local experts acknowledged there is still work to do.

Mental health and substance-use disorders have remained areas of concern in recent years, as the region continues to feel the effects of the opioid crisis and increasing teen suicide rates nationwide.

In 2018, there were 471 drug-overdose deaths in the state, according to data provided by the N.H. Chief Medical Examiner’s office. Of those, 32 occurred in Cheshire County, and 17 were in Keene, ranking them as the fifth-highest county and city for fatal overdoses in the state.

A total of 276 suicides were recorded in the state in 2018, according to data from the chief medical examiner’s office.

That marked the highest annual number of suicides in New Hampshire since 2009, the start of the data the office provided to The Sentinel. Of those last year, 16 happened in Cheshire County.

The region also grappled with at least two suicides by local youths this fall.

Phil Wyzik, CEO of Monadnock Family Services, said he’s glad more attention is being paid to these issues, but that the area still has a “way to go on the behavioral health side.”

“It seems like the needs for behavioral health treatment and demands on providers [are] growing faster than the financial resources needed to have sound prevention, treatment and recovery services on the ground,” Wyzik said in an email Thursday morning. “I think just about any health care provider would tell you that they are busier than ever.”

And accessing health-related services is even more challenging for residents outside of the bigger communities in the region, such as Keene and Peterborough, Sebert added.

“We continue to see folks that have barriers get in the way of their health,” he said. “Transportation and isolation for anybody that lives outside of the major hubs are issues that continue.”

But these concerns are all on Healthy Monadnock’s radar, LaFrance said.

Healthy Monadnock is working with the Peterborough-based Community Volunteer Transportation Co. — which recruits, trains and provides stipends to volunteer drivers — to expand its services throughout the Monadnock Region, according to LaFrance. The company drives residents to a variety of places, such as to doctors’ appointments and grocery stores.

“We realize that a huge variable in terms of health and well-being is poverty,” he said. “Just within Cheshire County, there’s significant variation in the population either living below or above poverty ... we have to be a little more targeted in terms of our efforts and resources.”

And as the organization continues to tackle the region’s shortcomings, Sebert said it’s important to note the progress already made.

“One of the strongest assets our region has is the number of amazing organizations and caring individuals, coupled with a great collaborative spirit, to continue to work together on a daily basis in our region to help improve the health of our community,” he said. “There is a strength in the Monadnock Region.”

From pianists to canines, volunteers welcome at Keene hospital

As patients waited in the main lobby of Cheshire Medical Center Thursday morning, the room began to fill with music.