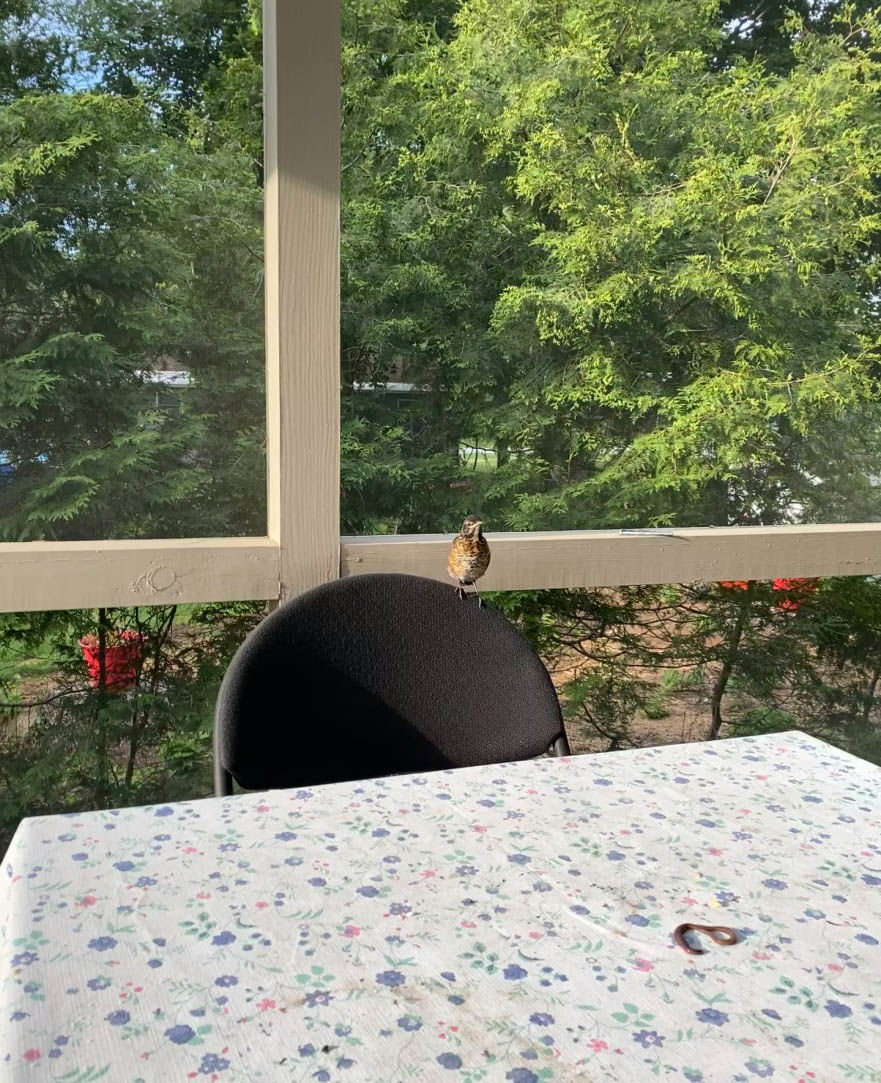 Eric the robin refuses to look at a worm. 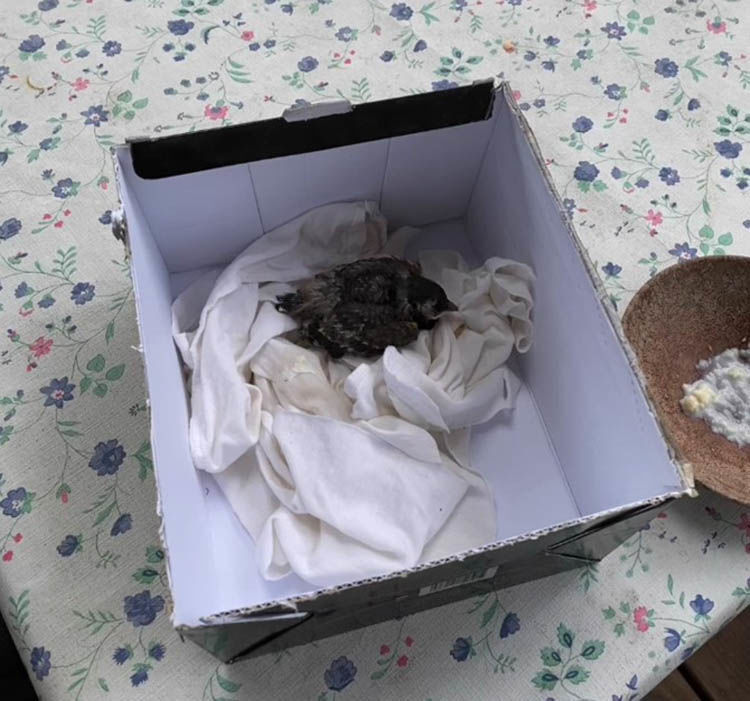 Eric the robin rests on a bed of paper towels on the day of his rescue.

Eric the robin refuses to look at a worm.

Eric the robin rests on a bed of paper towels on the day of his rescue.

On the morning of July 1 this year, I walked out between our screened-in porch and a row of arbor vitae trees. I saw a cute little toad. Ah, how nice, I thought. Not far from the toad was a bigger surprise — a baby robin, looking cold and afraid.

Thus began the story of Eric. I decided to name him after Leif Erickson, the ancient traveler and wanderer. Eleanore thought I should be sole parent, realizing his diet had to be consistent and that live worms would soon be his main diet.

Eleanore fixed up a nice cardboard box for him padded with paper towels.

I returned outside and picked him up. He had no feathers on his rump. It was just red skin with hair on it. His little feet felt uncomfortable on my hand, a sensation I had never had before. Of course he has scratchy feet, I said to my self — he’s a bird! I placed him in the box, went to the kitchen in search of food, found some blue berries and some leftover cooked farina. That was his first diet in his new home. He was so anxious to eat, it was hard to feed him. He yakked so much his bill often knocked the food out of my fingers. But he got enough.

Our nephew, Kevin, brought some fishing worms, which I cut in half and fed them to him. Eric liked them much better than the farina and blueberries. He grabbed them without yakking and never knocked a single worm out of my fingers.

How often to feed? I decided once every two hours, and he would have to sleep all though the night just like us. It worked.

Eric got used to me feeding him. Eleanore came into the room, and he said nothing. He just looked at her. I came into the room and he threw his little head back, opened his mouth wide and “yak, yak, yak” — he wanted his food.

One totally new thing I learned about a baby bird was about his poop. It did not come out as a big splash like on one’s car window or on the sidewalk. It came out in a delicate cellophane-like sack and I — if I was really careful and didn’t break the sack — I could pick it up without any dirt on my hands and put it in his poop can. I was able to do this about 50 percent of the time. The other 50 percent of the time I had a bird mess. Apparently, the mother robin can pick up these little poop sacks without breaking them and thus keep the nest clean.

During the day I put him out on the porch, and I noticed another robin fussing about in the trees, but didn’t pay much mind to it. Eleanore thought for sure it was the mother robin.

So we and little Eric got along quite nicely. I talked to him in a soft, high-pitched voice. I patted the soft feathers on his head. I explained to him how he would soon have to look down for his food instead of up. He answered by throwing his head up and yak, yak, yak, “give me more food.” Sometimes he didn’t yak. Sometimes he just looked at me. And I just looked at him. We knew and wondered about each other.

I began throwing worms down in front of his feet so he would learn to look down for his food, but he still threw his head up. On the fourth day, we went on the porch and he perched on a chair. I threw a worm on the table. “Eric,” I said, “look down.” I pushed his head down. He squirmed, looked up and “yak, yak, yak.”

I thought of Eric so much. How was it in such a short time I could fall in love with a bird? One of tens of millions of robins!! Ye gads, I thought. What is happening to me? Is this normal? Am I too emotionally involved with this little bird?

On the fourth day, Eric took some short flights while on the porch.

On the fifth day, Eric had flown out of his sleeping box and waited for his breakfast in the nearby sun window. I knew the time for keeping him was up. I fed him as usual, called nephew Kevin to bring his bird cage. My idea was to put him out by the trees, nearer nature but in the cage until he learned to look down for his food.

Then the bird cage came. I went up to him and looked him in the eyes. His eyes fixed directly on mine. I was deeply affected by how much he trusted me. I hated to put him in the cage. But I couldn’t let him fly away if he didn’t know how to look for food.

I took Eric out of the porch; he got away and took a short flight in the backyard. After he landed I went up to him and looked directly in his eyes. I said in my regular quiet voice to him, “Eric, I have to put you in a cage till you learn to look down for your food.” He looked at me. He could have flown away. He looked to me in trust. I reached out to him as usual. This time as I held him he sat on the little finger of my left hand. This time, unlike the first time, as his feet grabbed hold of my little finger it seemed that this little bird loved me too! I liked the feel of his wiry feet around my finger. He certainly trusted me. Grabbing my finger was like an infant child grabbing the finger of an adult and holding on to it.

I stuck Eric in the cage and shut the door, threw a worm on the ground and went to the porch to see if Eric would now look down to find the worm.

Eric did not look down. To my great surprise mamma robin, who had stayed in the nearby trees and kept in touch with “my Eric,” flew down within a few seconds to her caged baby.

I ran to the cage. She flew away. I took Eric out of it and returned to the porch. Eric remained near the cage.

Within a minute mother robin returned and again ran to Eric. She then hustled to a place under the trees, picked up an insect, ran back and dropped it in Eric’s mouth. She quickly ran again under the trees, picked up another morsel, retuned for a second feeding. As that was happening daddy robin appeared further down the lawn, grabbed something from the lawn, brought it to Eric and dropped it in his mouth.

Then all three robins — daddy on the left, momma on the right and Eric in the middle — flew away from our house to a wooded area behind the shed. A happy ending.

It did not quite end there, however. One morning sometime later a robin singing woke me up at 4 a.m. The singing came from the trees near my window. It was the familiar robin song, but it had a noticeable extra ring of vibrancy such as I never before heard. And never before had a robin sung so close to my window. Was it Eric — or his parent? I did not know, but I said, “Oh, sing to me Eric, sing to me.” I stayed awake for the whole 45 minutes and could not return to sleep.

I saw Eric a few days after that. He and his mother were at the bird bath. I could tell him by his speckled upper breast and the full breast of his mother. Mother did her usual, jumping in, fluttering her wings, ducking her head in the water and getting as wet as possible. Eric jumped in, perhaps for his first time — no fluttering, no ducking, once in briefly and then out was enough for him.

He stood on the edge of the bird bath. I looked at him and softly said, “Eric.” He looked straight into my eyes as he had always done. We still knew each other. Then mother robin circled in front of him and off they flew.

For information on when you should or should not attempt to help a baby bird, go to www.audubon.org/news/when-you-should-and-should-not-rescue-baby-birds

Smart lives in Keene. He is Professor Emeritus of history at Keene State College.