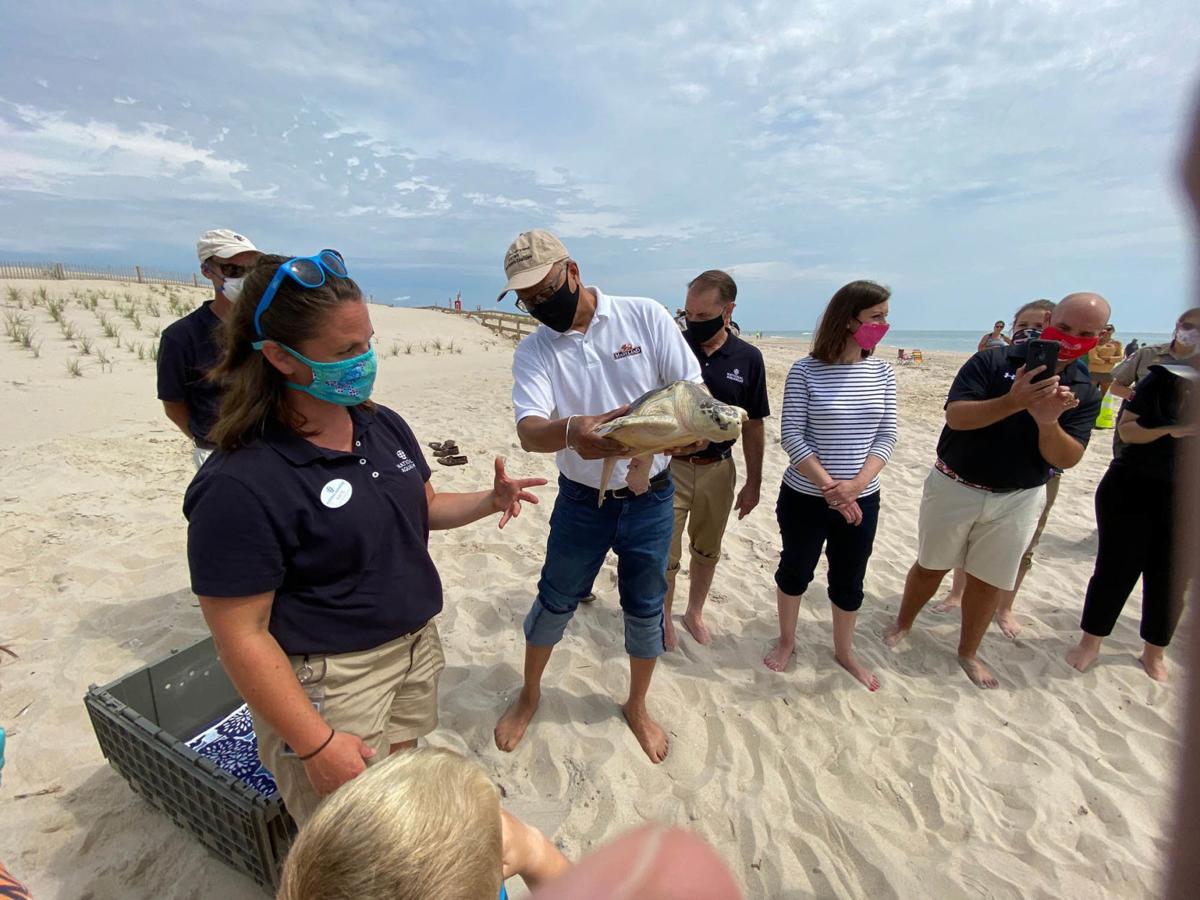 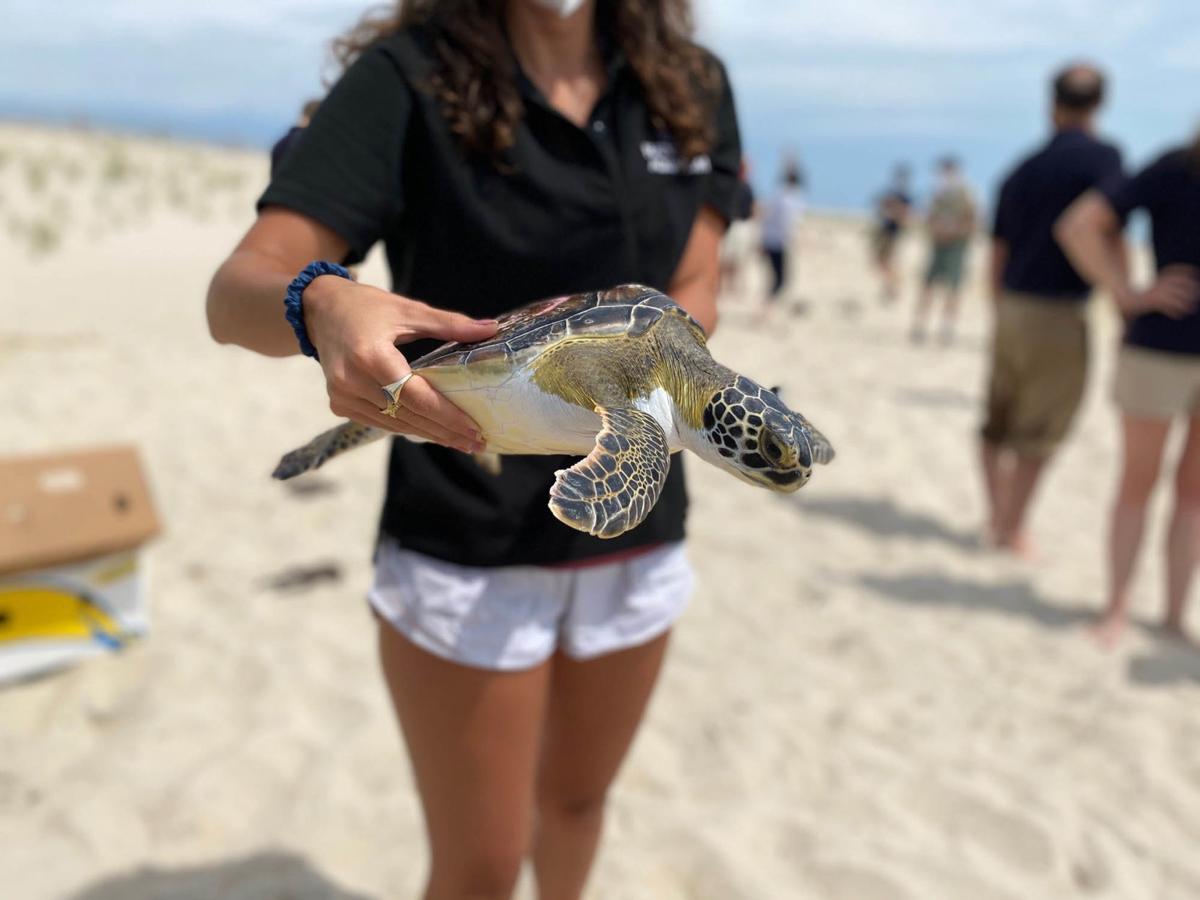 A green sea turtle, rehabilitated after stranding on a North Carolina beach in January, is seen just before its release in Maryland.

A green sea turtle, rehabilitated after stranding on a North Carolina beach in January, is seen just before its release in Maryland.

ASSATEAGUE STATE PARK, Md. — Seven months after washing up on the shores of Cape Cod, Mass., No. 300 stoically scanned the powdery beach while being held aloft by Maryland’s second-highest elected official.

It was hardly the strangest thing to befall the young Kemp’s ridley sea turtle, a Gulf of Mexico native, since the animal found itself in cool northern waters in November. Its body temperature plunged, making it too lethargic to swim. It was scooped up by volunteers who found it near-dead on shore. It was trucked to Baltimore, then warmed by aquarium workers who named it Muenster and treated its pneumonia. The turtle swam in a pool with other injured turtles named for cheeses, and swam some more, not knowing that outside, pandemic-related shutdowns were delaying its return to the Atlantic waters now before it.

Soon, Republican Lt. Gov. Boyd Rutherford, jeans rolled up to his knees, placed the turtle into breaking waves as beachgoers cheered this glint of hope at a time of tumult on land. And without a look back, Muenster became the first of 10 Kemp’s ridley and green sea turtles to paddle forth on this late June morning into an ocean that by some measures has become more hospitable to the seafaring reptiles and by others indicators — warming seas, intensifying hurricanes — may be turning more perilous.

Six of seven sea turtle species are threatened or endangered, their populations driven down by development of the beaches where they nest, pollution of the waters where they forage, fishing nets and lines that accidentally catch them, and hunting and trade. But even against that dim backdrop, the trends for those that swim U.S. waters look fairly positive, according to one recent study: Endangered species protections have helped six of eight populations rise.

Green sea turtles that nest in Florida had experienced such “remarkable recovery,” the study said, that their status was upgraded from endangered to threatened in 2016. But some experts worry that an increase in intense hurricanes, which may be worsening because of global warming, poses a growing threat to sea turtle beaches.

Kemp’s ridleys such as Muenster, the most endangered sea turtles of all, are a different story. Juveniles — ages 2 to 5 or so — commonly strand on Massachusetts beaches near where they spend summer months eating. While turtle stranding can be caused by entanglement, illness or boat-strikes, these turtles are usually “cold-stunned”: After having followed ocean currents up the Atlantic to the Gulf of Maine, those that stick around too long end up in water too cool for them to handle — perhaps because they get stuck in the hook of Cape Cod.

“I suspect these little guys have this innate sense that when temperatures drop, they need to swim south. For a lot that need to be in that area, it’s fine,” said Kate Mansfield, a biologist who directs the University of Central Florida’s Marine Turtle Research Group. “But if you’re in that Cape Cod area and try to go south, you’re going to hit beach.”

The number of cold-stunned turtles stranding on Cape Cod annually varies but is rising overall. Just over 200 stranded in 2010, according to the Mass Audubon Wellfleet Bay Wildlife Sanctuary. In 2014, a record 1,241 did; in 2018, more than 800. This past winter, 301 were swept ashore.

The New England Aquarium nurses some back to health, but the high numbers mean a network of facilities must take in others. Almost all the patients have pneumonia — which produces raspy breathing in a sea turtle — and many have gastrointestinal problems and external injuries, said Kate Shaffer, rehabilitation manager for the National Aquarium in Baltimore, which cared for the turtles released at Assateague. The most dire case to come into the National Aquarium this past season, Mascarpone, arrived with an eye so scabbed over the staff wasn’t sure it was there, she said. (It was, and it recovered.)

“The process of a turtle ending up on the beach against his or her will is definitely a rough one. They’ve probably been cartwheeled around in the surf,” said the National Aquarium’s CEO, John Racanelli. “A lot of them come back with eye injuries.”

It isn’t clear what is driving the surge in cold-stunning off Cape Cod Bay, although some experts think it may be a good sign — more nests means more stranding. But researchers at the University of Massachusetts at Amherst found in a study published last year that the increase is associated with rising sea surface temperatures caused by climate change, not with a rising number of hatchlings. The Gulf of Maine is warming particularly quickly, and that may be causing the turtles to expand farther north, the researchers wrote.

That same paper said that while rehabilitation efforts like the one that got Muenster back to the ocean probably save a minute percentage of Kemp’s ridleys, they are critical to continuing to “bolster population resiliency.”

Or as Racanelli, standing on the beach under gauzy clouds, put it: “This is one place where we can intervene and actually do something good for a species... . They just need a chance to get back on their little flippers.”

The aquarium chooses a theme each year when naming rescued wildlife it admits, which is how this season’s batch of 35 cold-stunned turtles came to be named for cheeses. Of the 10 released last week, four were Kemp’s ridleys and six were green sea turtles. The greens stranded off North Carolina, where cold-stunning occurs during unusual cold snaps. The aquarium’s first-ever cold-stunned sea turtle from Maryland, Cheddar, came in this season but did not survive.

“This particular batch this year was a pretty rough group of turtles,” Shaffer said, referring to their conditions.

Muenster, the star of the release because he was the aquarium’s 300th rehabilitated animal, was expected to head back to the ocean during a winter release in Florida but wasn’t well enough. Then, a release planned for April was scuttled because of coronavirus shutdowns.

Now, it was June, and the beaches were open — to humans and to turtles.

But the release last week was not typical. It was carried out at Assateague State Park, rather than a more crowded location such as Ocean City, in hopes of more social distancing for all present. Volunteers, the backbone of the aquarium’s rehab program, were not told about the event for the same reason. Aquarium staff greeted each other as if at a family reunion; most had not seen each other since March. All wore masks, and hand sanitizer was squirted liberally.

In normal times, Racanelli said, he would be in Baltimore running the aquarium and “chasing donors.” But the aquarium was closed.

The turtles were pulled out of a white truck one by one, each resting on a towel in a cardboard Chiquita banana box donated by a supermarket.

As they walked toward the ocean, staff members carried Brie and Mascarpone, both Kemp’s ridleys, down a line of spectators standing behind yellow caution tape and orange cones. Tags akin to pet microchips were implanted in the animals so they can be identified if they strand again. It happens.

The turtles moved their flippers back and forth, as if already imagining being in the sea.

“I hope you enjoy the ocean!” one woman gushed.