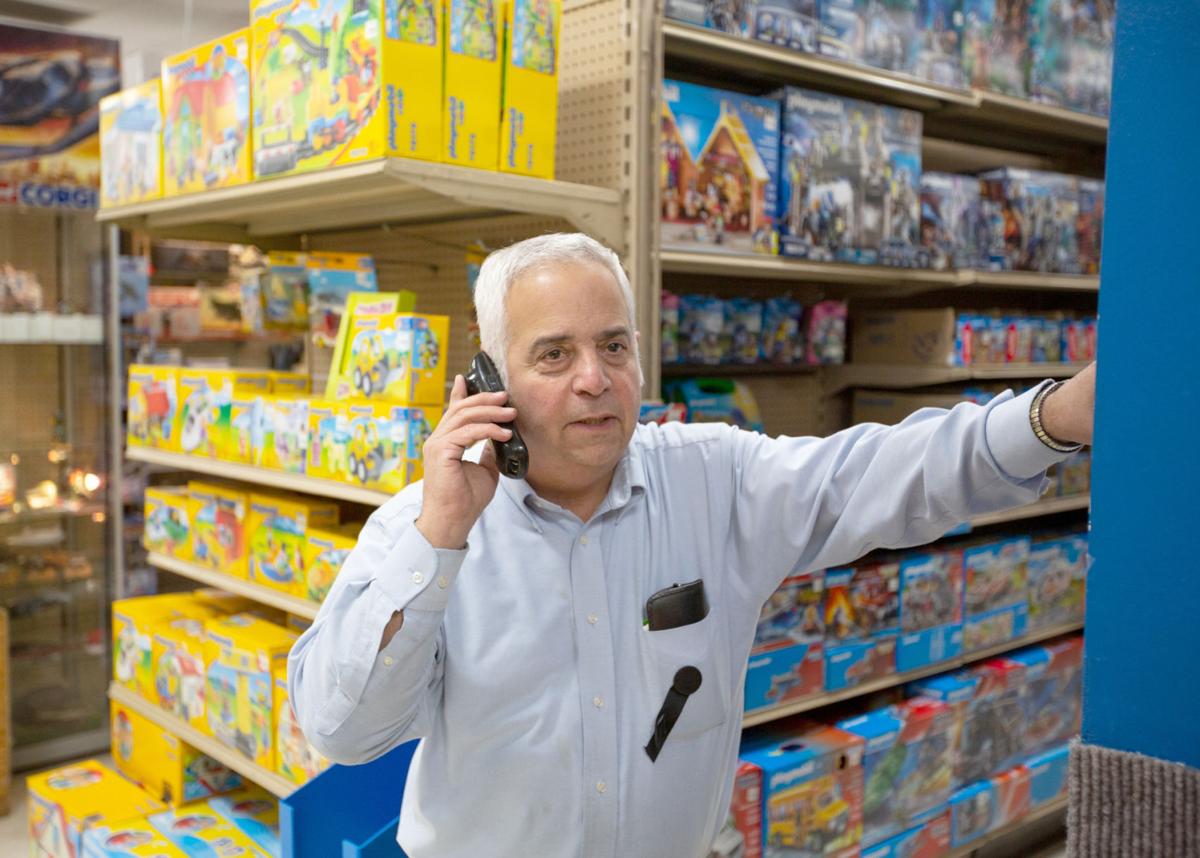 Toy City owner Steve Levy talks on the phone Thursday with a sales rep from RBG Sales Group about the shortage of Breyer brand toys in his store in Keene. Levy was unsure if he should send in a request form for Breyer products, since he is not sure if the request will be filled in time for the holiday season. 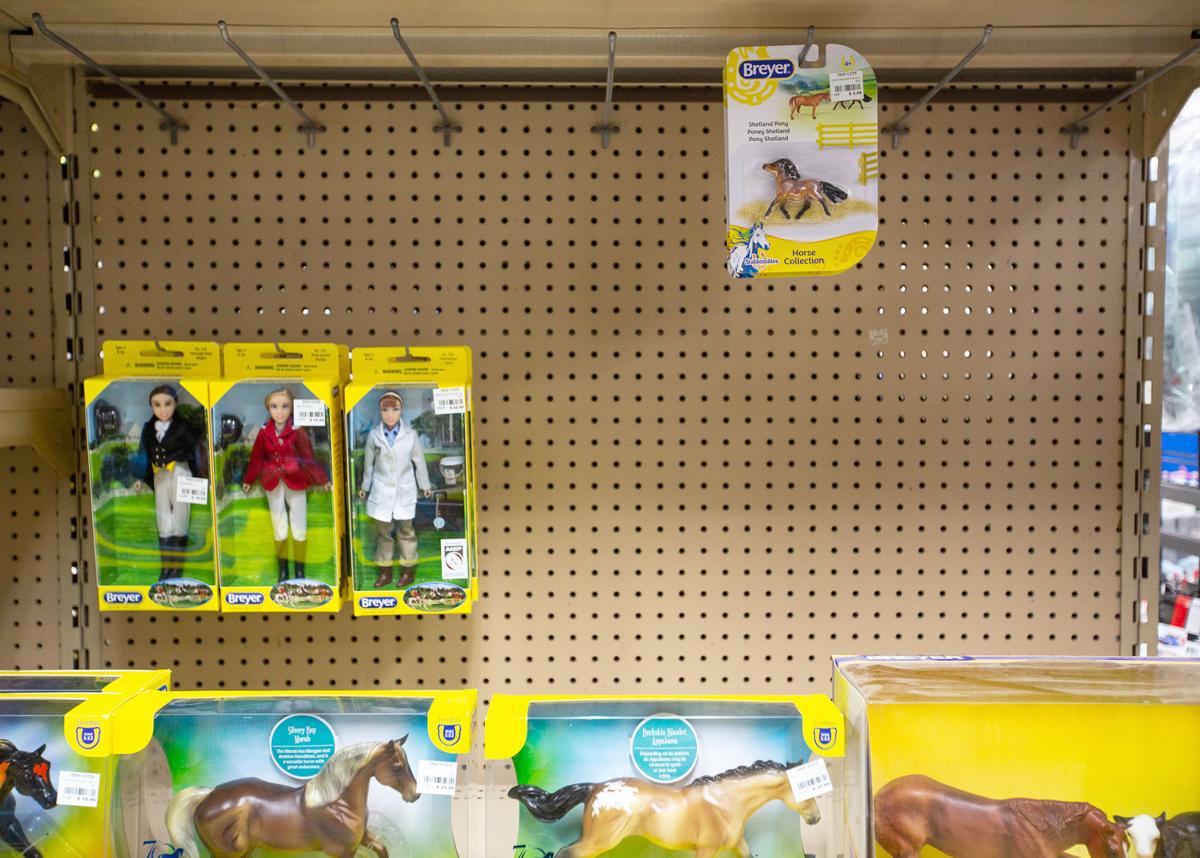 A section of Breyer toys at Toy City in Keene shows gaps Thursday, the result of suppl-chain slowdowns.

Toy City owner Steve Levy talks on the phone Thursday with a sales rep from RBG Sales Group about the shortage of Breyer brand toys in his store in Keene. Levy was unsure if he should send in a request form for Breyer products, since he is not sure if the request will be filled in time for the holiday season.

A section of Breyer toys at Toy City in Keene shows gaps Thursday, the result of suppl-chain slowdowns.

From shoes to toys, Monadnock Region retailers are feeling the effects of supply-chain disruptions.

Steven Levy, the owner of Toy City in Keene, said shipping delays have made it crucial to order inventory well in advance.

“We are beginning to receive product that we ordered in late June and early July,” he said. “... So if you placed an order, let’s say, in September for goods for Christmas, I doubt you’re gonna see them in December. You’ll probably see them in January or early February.”

Stores across the state are in a similar place, said Nancy Kyle, president and CEO of the N.H. Retail Association.

“It is unbelievable what our retailers are facing,” she said. “They can’t get products in a lot of instances. If they can get products, it’s months to get them here, and it’s not unusual to have eight price increases in the past year.”

Kyle attributed that to a multitude of factors, including shortages of key components like computer chips, factory shutdowns in Asia due to COVID-19 outbreaks, congestion at ports that leave containers sitting on the West Coast and too few truck drivers to distribute goods across the U.S.

The delays and product shortages have hit big and small retailers alike, Kyle said. The uncertainty has made it harder to plan, and being unable to get as much product in has hurt sales.

At Ted’s Shoe & Sport in Keene, owner Ted McGreer is looking ahead to spring. His orders have been placed, but vendors have told him they’ll likely be 60 days late. That’s a problem for an outdoor-sports retailer because demand is seasonal.

“The demand doesn’t wait for the supply,” he said. “... The minute March 1 hits, then you’ve got all your high schools, your running programs, people want to get outdoors. And that first 45-degree, sunny day, our business is like a light switch.”

It’s also become much more difficult to order on-demand when a customer wants an item in a particular color or size.

McGreer said many of the brands he carries also sell direct to consumers through their own websites. The retail price is the same, but with inventory limited, he said, brands are prioritizing their own direct-to-consumer businesses rather than shipping products to independent retailers. So even if customers want to buy through Ted’s, they may end up ordering directly from the brands because that’s the only way to get certain items.

Sales reps help make that up to him with other inventory, he said.

One thing that’s helped somewhat, McGreer said, is that Ted’s has started to manufacture some of its own products over the past decade, including insoles and running apparel. While those are also made overseas, McGreer has more control over the process.

“I don’t have to rely on some of these shortfalls, because I hold the key there,” he said.

But he noted that special orders are taking longer, which could hit last-minute shoppers. Previously, the store has been able to order something on Dec. 21 and receive it by Dec. 23. The store’s wholesaler has said that won’t be possible this year.

“We’re used to getting things from them in two days, and the warning is, two weeks before Christmas, we should not expect any reorders to come in,” Williams said.

“It’s a question of encouraging people to shop early, think about what they might want so we have time to get them in,” he added.

“We have a lot of work, like a ton of orders,” Hansel said, “but it’s taking us three times as much labor here internally to produce the same amount because sometimes we’re having to redesign our own products based on where we can get components, and we’re facing really long lead times on material that is just sort of commodity, everyday material for us.”

For example, stainless steel tubing is used in almost everything Filtrine makes. Hansel said the company has never had an issue getting it in the time he’s worked there, until now.

“One of our suppliers, their lead time went from maybe two months to almost a year,” he said. “And that’s just very, very typical. We’re seeing that with pumps and all types of components.”

Filtrine relies mostly on U.S.-made components, which has “sheltered us quite a bit from the worst of this,” Hansel said. “But now, the people making our products are still struggling to get raw materials.”

It’s actually been a small boon for local machine shops, Hansel said — out of necessity, Filtrine is turning to local producers for commodity parts like valves.

Hansel and others said they don’t see the supply-chain issues resolving themselves any time soon.

“The good news is, everyone’s busy,” Hansel said of local manufacturing companies. “... I’m just hopeful that a year from now, some of these things on the macro level, whether it be worldwide shipping or trade policy or other things, get resolved.”

In the meantime, customers will have to adapt and reset their expectations, she said.

“Americans are used to instant gratification, and it’s not gonna be like that,” she said. “You’re not always gonna get the product that you want. You’re gonna have to settle for something else, or it’s gonna be a lot more expensive than what you thought.”

Levy said people are shopping earlier this year, aware that last-minute holiday shopping could be tricky.

McGreer said customers have been understanding about the situation retailers are in.

“The consumer has become so ... wonderfully patient and wonderfully kind about it,” he said. “I say, ‘Listen, I know you love the purple one. I just can’t get that until next year, and I have the pink one here, and the black one.’ ‘You know what? That’s totally fine, I’ll take that.’ So we’ve seen that little shift, that people know there’s some challenges.”