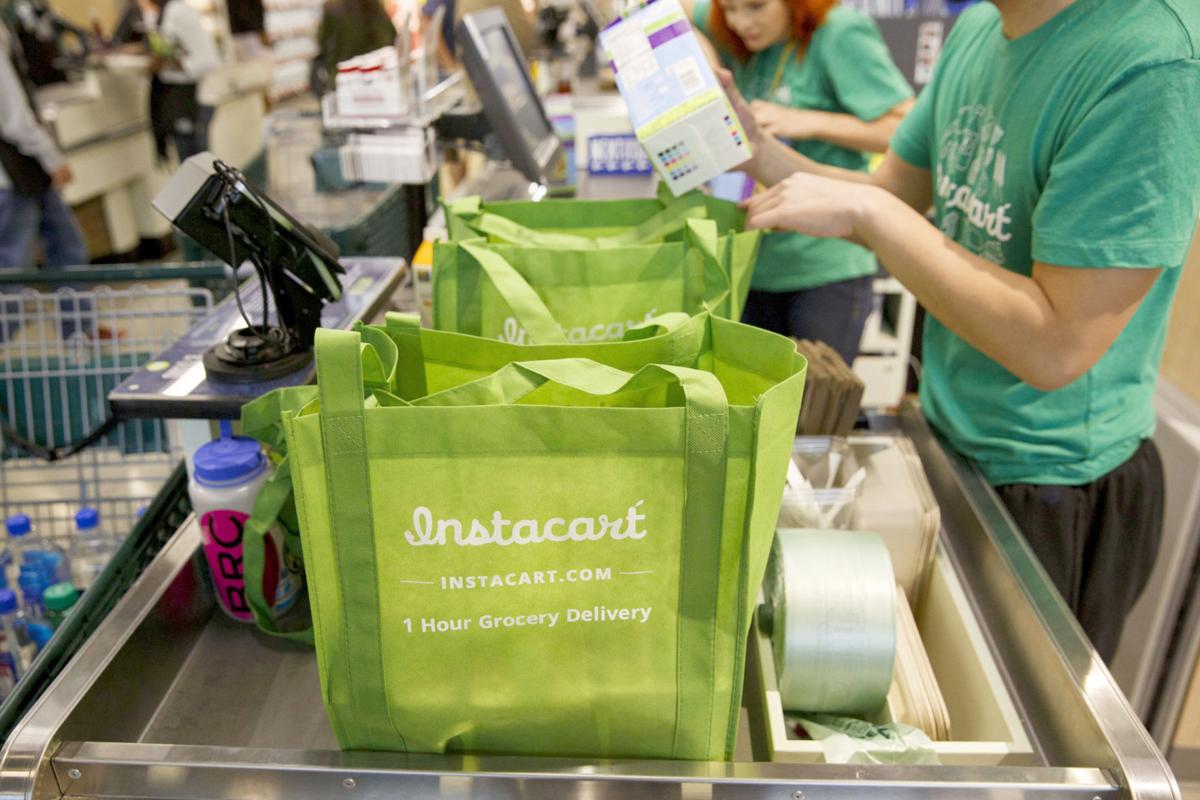 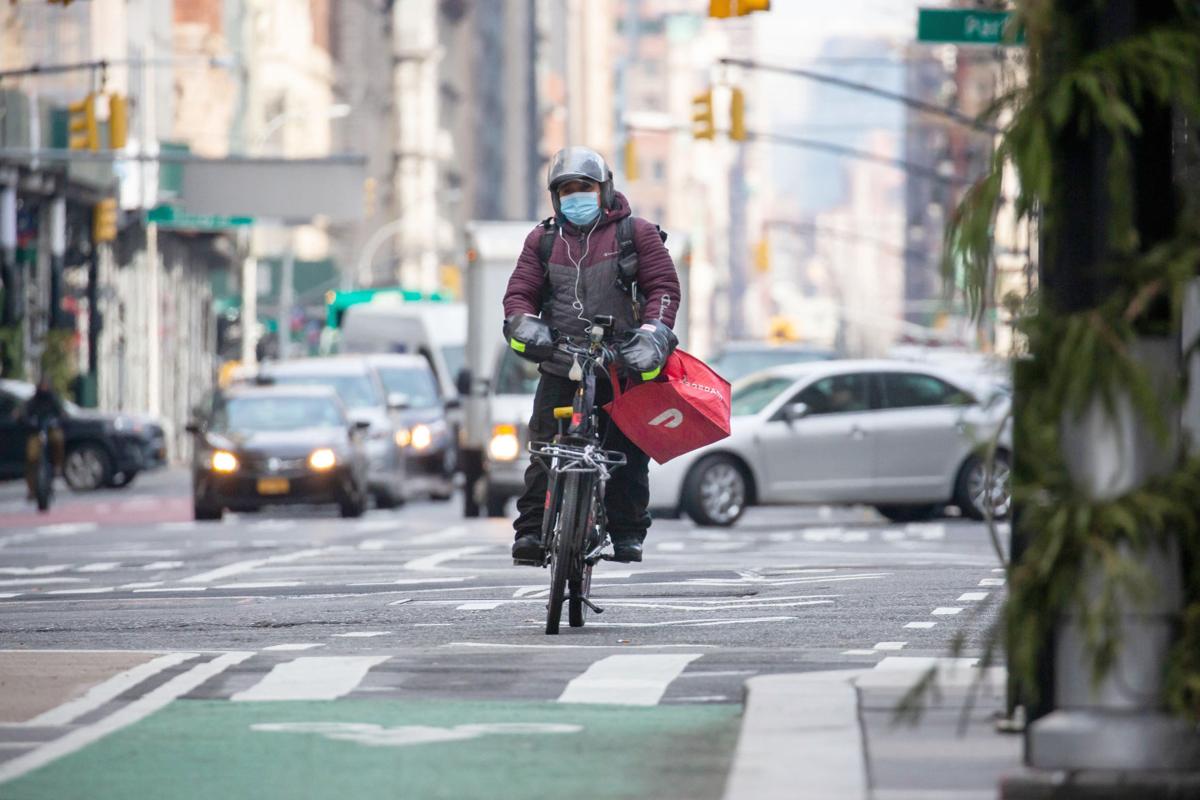 A bike messenger heads through New York City with a DoorDash bag on Dec. 9.

A bike messenger heads through New York City with a DoorDash bag on Dec. 9.

As you mull ordering some late gifts or New Year’s Eve goodies, chew on this.

Amid the frenzied journeys to restock fridges or drop off stocking stuffers, drivers and shoppers for on-demand delivery apps like Shipt, DoorDash and Instacart must navigate a maze of pandemic-induced obstacles, any one of which can shrink their pay.

Long lines, product shortages and temperature checks are just a few in the age of covid-19. Ruled by algorithms that gauge their performance, six gig workers interviewed by Bloomberg News said the slightest hitch can hijack their rating as they run around store aisles trying to find whatever it is you want.

“The chips are stacked against us,” said Willy Solis, 42, a Dallas-based shopper with Shipt. He complains that the metrics are “unforgiving” and based on “variables you can’t even control.” Solis, who is also an organizer with the grassroots group Gig Workers Collective, said he has worked with various delivery apps, including DoorDash, Instacart and UberEats.

The pandemic sent a flood of workers into the gig economy, an influx that’s only accelerated this holiday season, said Julia Pollak, a labor economist at jobs site ZipRecruiter. Shipt went on a spree in October, hiring 100,000 new shoppers and another 50,000 at the end of November. Instacart and DoorDash have also ramped up, advertising heavily on internet job boards and offering incentive bonuses, she said.

But the increased number of gig workers has intensified competition for orders. According to a study by Flourish Ventures, a financial technology venture capital firm, 68 percent of gig workers surveyed reported a decline in income after pandemic lockdowns began in March. Across all apps, workers interviewed by Bloomberg said there just isn’t enough work to go around.

“ ‘Dashers’ are everywhere now,” said Nytalia Cooper-Kersting, 37, a part-time driver with DoorDash in Decatur, Ill. Kersting has worked with the app for more than two years, but said she began driving consistently in March, dedicating about 25 hours a week to cover her car payments and avoid dipping into her savings. Since then, her town of about 70,000 people has been swamped with drivers. “It takes 12 to 14 hours a day for a bunch of $3 and $4 orders to make fifty bucks,” she said.

Shane Robb, 45, is an Instacart shopper in Fort Meyers, Fla. He took up gig work when his shipping and mail services store was shuttered by the pandemic in March. Robb said his wages averaged roughly $800 a week in April, driven by steady demand from senior citizens who were locked down at home. But as the year progressed and more unemployed Americans started delivery work, his earnings dwindled. “I have a 4.96 rating out of 5 and the only orders I get are $8 or $10,” Robb said. “I’m making less than minimum wage.”

For Shipt, DoorDash and Instacart workers, ratings are based on a combination of how often they accept orders, customer satisfaction, completion and speed, according to the companies’ websites. On Shipt, those with the highest ratings get priority for delivery jobs, while in Instacart’s case, high ratings lead to the best paying orders. Solis said the problem with these systems is that unforeseen circumstances can result in shoppers being punished “for things that are out of their control.”

From the second Solis takes an order, the clock starts ticking. At the store, he weaves through aisles, dodging one potential setback after another: an item is out of stock, a customer isn’t confirming a substitute, or a store employee needs to check inventory.

“With the holiday shopping rush, you have a lot in your basket, lines are long and God forbid your credit card doesn’t work,” he said. “All that time adds up-and if you’re late, your rating takes a hit.”

Shopper ratings “are the clearest indicator of customer satisfaction,” Birmingham, Ala.-based Shipt said in a statement, adding that shoppers are “notified when there are opportunities for improvement.”

If a shopper’s rating drops below a certain threshold, however, they could be thrown off the app, also known as “deactivation.” Appealing or merely seeking an explanation for a poor rating or deactivation rarely yields the desired result, workers said.

“You can’t even defend yourself,” Solis said. “You get a generic email and are pushed right to the bottom of the totem pole for orders.”

A 44-year-old woman who delivers for Shipt in Detroit said complaining is often fruitless because sometimes she gets passed from one representative to the next with no resolution (she requested anonymity because she fears losing her full-time job). Shipt said the company “offers multiple feedback channels and communities where shoppers are encouraged to speak to Shipt about their experience.”

Shipt, which was acquired by Minneapolis-based Target Corp. in 2017 in a bid to compete with Amazon and Walmart, offers grocery delivery as well as items from retailers like Best Buy, Bed Bath & Beyond and Petco. For Kassye Raulston, who delivers for Shipt around Fort Worth, Texas, a ding to her rating could jeopardize her ability to pay rent.

“With every delivery, you’re putting it all on the line,” said Raulston, who has two children and said she was recently homeless. “If I get a holiday order with 100 items that needs to be delivered an hour later, I’m racing through a crowded store hoping nothing goes wrong, because every second counts. I can’t afford to be at the bottom. I need to keep a roof over our heads.”

Even though Raulston has been a gig shopper for two years, she said, her record of timeliness and positive reviews can be washed away in an instant with one bad review. Sometimes she’s given an explanation, while other times, she contends, she’s “blindsided” by a random drop of her rating. Earlier this month, she said, her order acceptance rating fell from 90 percent to 82 percent despite not having declined a single order.

The pandemic has amplified the precarious nature of such gig work. Amid rising infections, Raulston said she’s forced to juggle speed with safety. Since her husband is immunocompromised, she said fulfilling each order isn’t just risky for her, but her husband as well.

“It terrifies me,” she said. “Stores are packed and people in my town don’t care about wearing masks.” Still, turning down an order isn’t an option, Raulston said. “We need the money.”

For Kersting, who uses San Francisco-based DoorDash to deliver from fast-food restaurants, deactivation is her biggest fear. She guards her rating fiercely: “Anything less than a ‘5’ could get you kicked off,” she said. According to DoorDash’s deactivation policy, once a driver has accepted at least 20 orders, those with a customer rating below 4.2 or a completion rate below 80 percent may be subject to deactivation.

In a statement, DoorDash said a “transparent ratings system” is “a central part of how” shoppers receive and understand customer feedback. The company also said that it gives drivers the option to appeal a deactivation or poor rating.

In the past few months, Kersting has also had to contend with customers who claim an order was never delivered-what she said is a scheme to collect a free meal. She now takes pictures of her deliveries as proof they were dropped off. “People are struggling with money. I get it, it’s a pandemic and times are tough,” she said. “But it also really hurts drivers.”

New York-based driver D’Shea Grant, 42, has also had experience with customers claiming theft. She said DoorDash’s rating system is “good for accountability” and keeps her focused. While “it’s far from perfect,” Grant said disputes are typically resolved within “a few days.”

“You could contact them everyday to tell them ‘hey, I did everything right,’ and still not get it resolved,” said Robb. “You have no idea what went wrong or which customer it even came from. Most customers don’t understand that any rating less than five stars crushes us.”

In March, at the outset of the pandemic, Instacart paused prioritizing access to orders based on ratings, in addition to forgiving all ratings under five stars. Shipt rolled out a similar policy in April. Both companies have since reverted to their pre-pandemic rating structures, according to their websites.

“The shopper ratings system was designed to be reliable, fair and accurate, and we have several measures in place to ensure shoppers are not unfairly rated for reasons outside of their control,” San Francisco-based Instacart said in a statement.

DoorDash recently went a step further by phasing in updates to its ratings system on Dec. 17. In addition to its earlier decision to exclude ratings impacted by factors deemed out of a driver’s control, the new system includes a detailed breakdown of their average rating, customer feedback including direct quotes for more transparency, and the ability to dispute lateness before deactivation. According to the company, a full roll out of is expected to be completed before the end of the year.

In October, Shipt phased in a new pay scale that eliminated its original commission structure in favor of an algorithm the company says is based on the “effort” shoppers put into the order. Before the change, Raulston said she was making $500 to $700 a week, earnings she said helped her get back on her feet after she lost her home.

Under the new system, Raulston says she’s making a lot less. Shipt states that the new system incorporates variables like travel time, total order items, time of day and traffic “to pay for the effort and work completed.” It eliminates the previous 7.5 percent commission on the total order value. The company said “there isn’t a formula that can be shared because each metro has unique characteristics that can affect the shopping experience.”

Kersting, a mother of three, said that while she understands the companies’ reasons for acceptance ratings, they strip shoppers of the ability to choose orders worth their time. “They want to make sure you’re reliable; I can’t blame them,” she said. “But this is a pandemic. We’re out there risking our safety and health.”