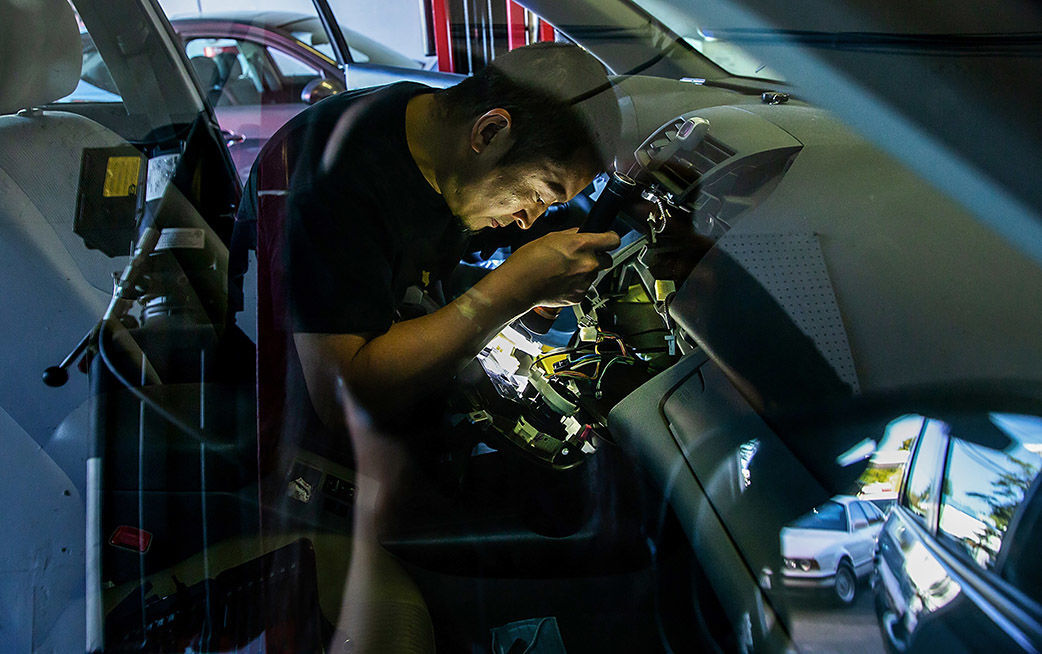 Jakob Lorz is the owner of Lorz Automotive in Seattle, an auto repair shop he opened earlier this March. A shortage of skilled car mechanics has him working solo 12-hour days, six days per week, to meet demand. 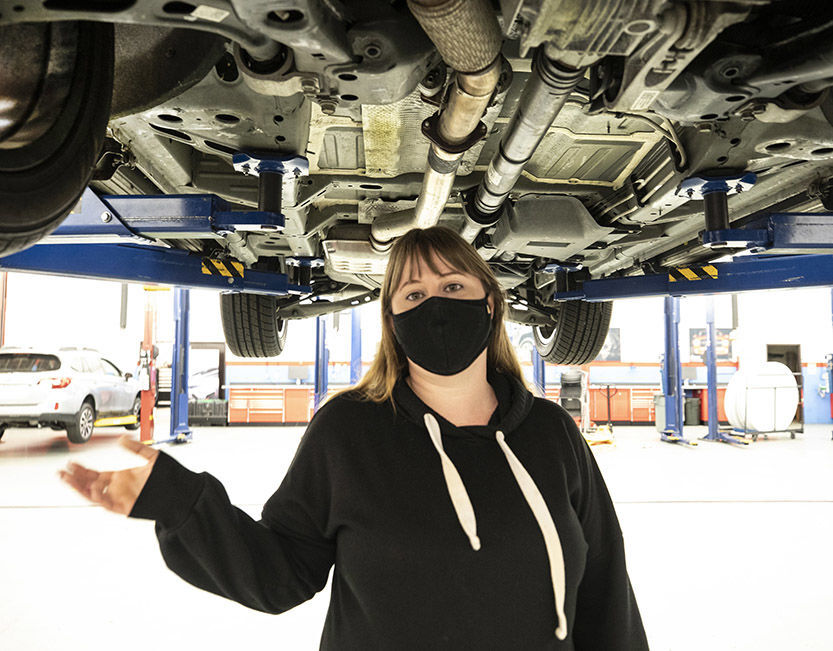 Amber Avery is an instructor in the Shoreline Community College automotive program. Standing below a late model Chevrolet that was donated to the program, she talks to us about Seattle’s next labor crunch: the people who fix your car.

Jakob Lorz is the owner of Lorz Automotive in Seattle, an auto repair shop he opened earlier this March. A shortage of skilled car mechanics has him working solo 12-hour days, six days per week, to meet demand.

Amber Avery is an instructor in the Shoreline Community College automotive program. Standing below a late model Chevrolet that was donated to the program, she talks to us about Seattle’s next labor crunch: the people who fix your car.

SEATTLE — When Mike Zebley took a job delivering tools to Seattle-area car shops this year, he quickly learned that what most of his customers needed wasn’t tools so much as people who knew how to use them.

Nearly every shop on Zebley’s route was so hard-up for skilled mechanics that many promised Zebley up to $1,000 for anyone he could recruit. Despite the incentive, however, Zebley hasn’t been able to deliver a single mechanic. “Everybody that I go to needs techs,” he says. “They’re pretty desperate.”

Stop by any garage, car dealership, or body shop and you’ll likely hear a similar take on one of the less visible and more revealing labor crunches.

Demand for repairs and maintenance is rebounding from the pandemic. But many garages are so short-staffed they’ve had to delay work or send customers elsewhere — despite, in some cases, offering hefty signing bonuses and six-figure salaries for experienced candidates.

“I would hire two guys today,” says Charles Jung, manager at Fix Auto Collision in Seattle, where lack of staff means about $40,000 in forgone business every month.

At Jakob Lorz’s recently opened garage on Rainier Avenue South, he now has enough business to add a mechanic, but can’t find any. “Everyone that has a job that I know in this industry, they’re getting paid, like, top, top, top dollar,” he says.

The shortage is so severe that some shops are trying to poach rivals’ talent. “You’ll get someone who just drives in off the street and wants to talk to one of your technicians,” warns Tim Eaton, past president of the Automotive Service Association’s regional affiliate and owner of Hi-Line Auto Electric in Burien, which is down three positions, despite offering salaries of up to $100,000.

Seattle isn’t the only place short on mechanics, collision specialists and other automotive technicians — the problem is national — but its problem is especially acute. As of July, Seattle-area job postings for the broader category of vehicle and mobile equipment mechanics, which also includes truck and aircraft mechanics, was nearly double the supply of unemployed mechanics, according to a monthly estimate by the state Employment Security Department. That’s the biggest shortfall in the state — and an ironic twist, given the Seattle area’s reputation for a highly skilled workforce.

What’s driving the shortage? Some garage owners, echoing complaints in other industries, blame the $300-a-week federal pandemic unemployment benefit that was added to regular state jobless benefits in response to the job market’s sluggish recovery from COVID-19-related layoffs.

Yet while those enhanced benefits, which expired Sept. 4, may have contributed to the shortage, especially for entry-level workers, automotive specialists were scarce long before COVID-19, industry experts say.

More to the point, the larger factors driving that shortage — among them, Seattle’s infamously expensive housing market — won’t be fixed simply by taking away a benefit.

“This is just a culmination ... of what’s been happening within our industry for many years,” says Eaton.

One longstanding problem: In Seattle and across the country, fewer people want to work on cars.

Even before COVID-19, enrollment was slipping in automotive technician programs at many community colleges and vocational schools. Many high schools no longer offer automotive shop classes, and fewer students seem interested in fixing cars.

One reason, experts say, is that automotive repair often clashes with our evolving attitudes about what counts as a “good” job, especially in labor markets that are so dominated by well-paid “knowledge” workers.

Physically, fixing cars is “is hard on your body,” says Jerry Barkley, owner of Crown Hill Automotive in Seattle.

Yet increasingly, it’s also a job that demands high-level technical know-how and problem-solving skills, especially as cars have become more computerized. These days, a mechanic is “somebody who is able to analyze data and process that information,” says Amber Avery, a former mechanic who now teaches in Shoreline Community College’s automotive program. Those demands, which help explain why the industry prefers “automotive technician” to “mechanic,” will only intensify as electric drives replace internal combustion engines.

The problem, industry officials say, is that students with the aptitude for today’s automotive technology choose engineering or programming jobs, which are high-status and well-paid, over automotive repair, which is still widely seen as a lower-status job.

“There’s still a stigma that these are guys back in a gas station in the 1950s that are just changing oil, when in fact, it’s some of the smartest people I know,” says Paul Svenkerud, service director at Carter Volkswagen & Subaru, which is short at least 20 technicians across four Seattle-area locations.

Yet despite the profession’s increasingly technical bent — and corresponding potential for high salaries — Svenkerud says, “I think a lot of parents are not encouraging their kids to go to an automotive trade school.”

That’s not just an urban problem. Between 2016 and 2019, enrollment in the automotive program at Big Bend Community College in Moses Lake fell from 52 to 39, according to school officials.

A person’s job status isn’t the only barrier. An experienced master automotive technician or collision specialist can indeed earn upward of $100,000 a year. But many entry-level techs will make close to the minimum wage, which even in Seattle means barely $40,000 a year.

As challenging, at many shops, entry-level techs are still expected to have perhaps $5,000 to $10,000 invested in their own tools — and to be willing to invest many thousands of dollars more as they advance.

By the time an automotive tech reaches the top level, “these guys are rolling around with essentially one hundred grand, plus or minus, of their own tools and equipment,” says Hi-Line’s Eaton.

That’s one reason many would-be techs switch to trades with lower entry costs and faster payoffs. “In construction, if you spend $5,000 [on tools] you can make $35 an hour,” says Erick Hernandez, a mechanic at T-Auto Repair in Burien. As much as he loves working on cars, Hernandez acknowledges, “this job is expensive.”

The tight labor market has been a boon for technicians, who now have even more bargaining leverage. As Svenkerud wryly puts it, when a qualified candidate actually responds to your job posting, “they’re usually already employed ... and all you end up doing is renegotiating their rate of pay at their current job because once they go to give notice, they get a big raise to stay.”

But for many smaller garage owners, who can’t offer the same wages as their larger counterparts, competing for talent isn’t always an option and they might curtail work.

But others don’t feel they can turn down customers. “Honestly that’s like throwing away money,” says Lorz, whose solution to the labor crunch shortage is one that is familiar to most small business owners.

“Basically, if I can’t find anybody, I could do it myself,” he says, shrugging. “It’s just longer hours, you know.”