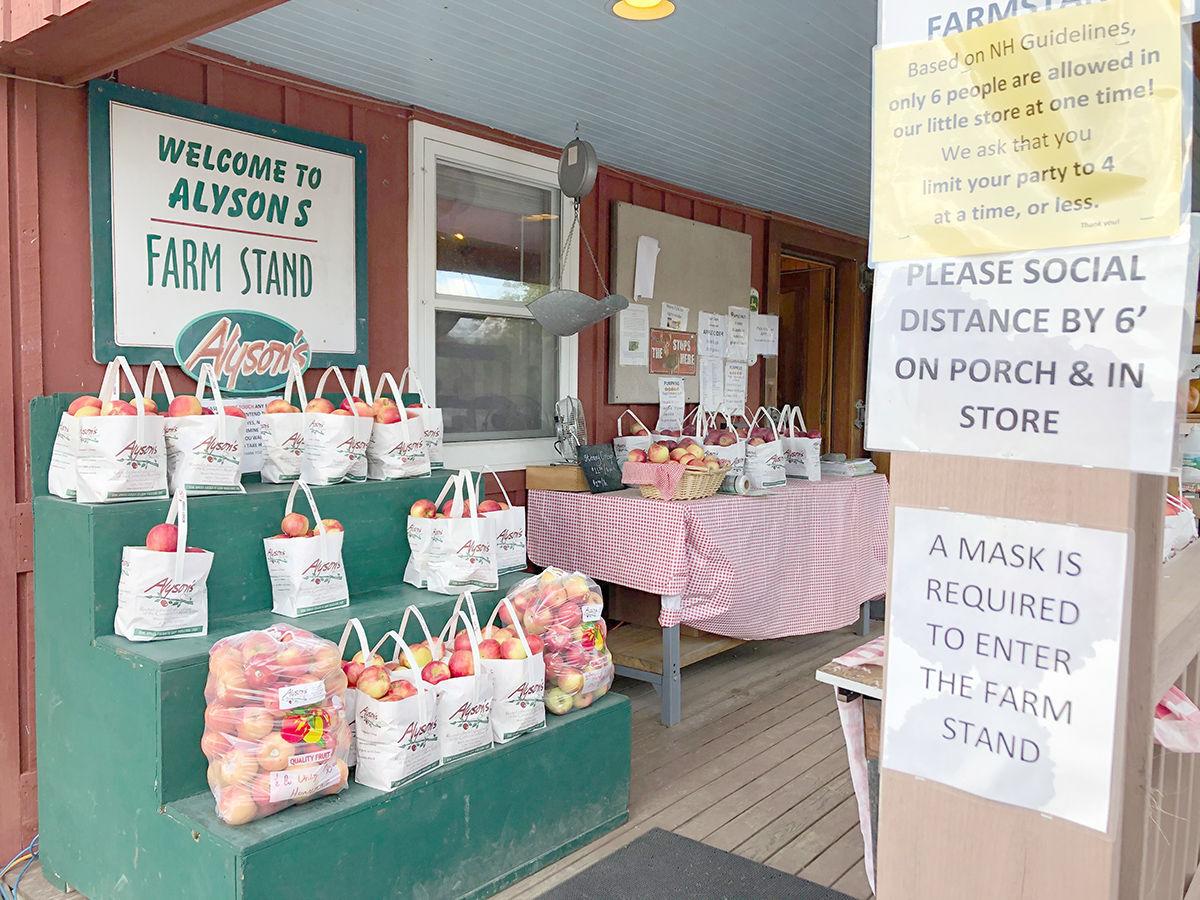 Signs warn apple-pickers and others to social distance at the farm stand at Alyson’s Orchard in Walpole. 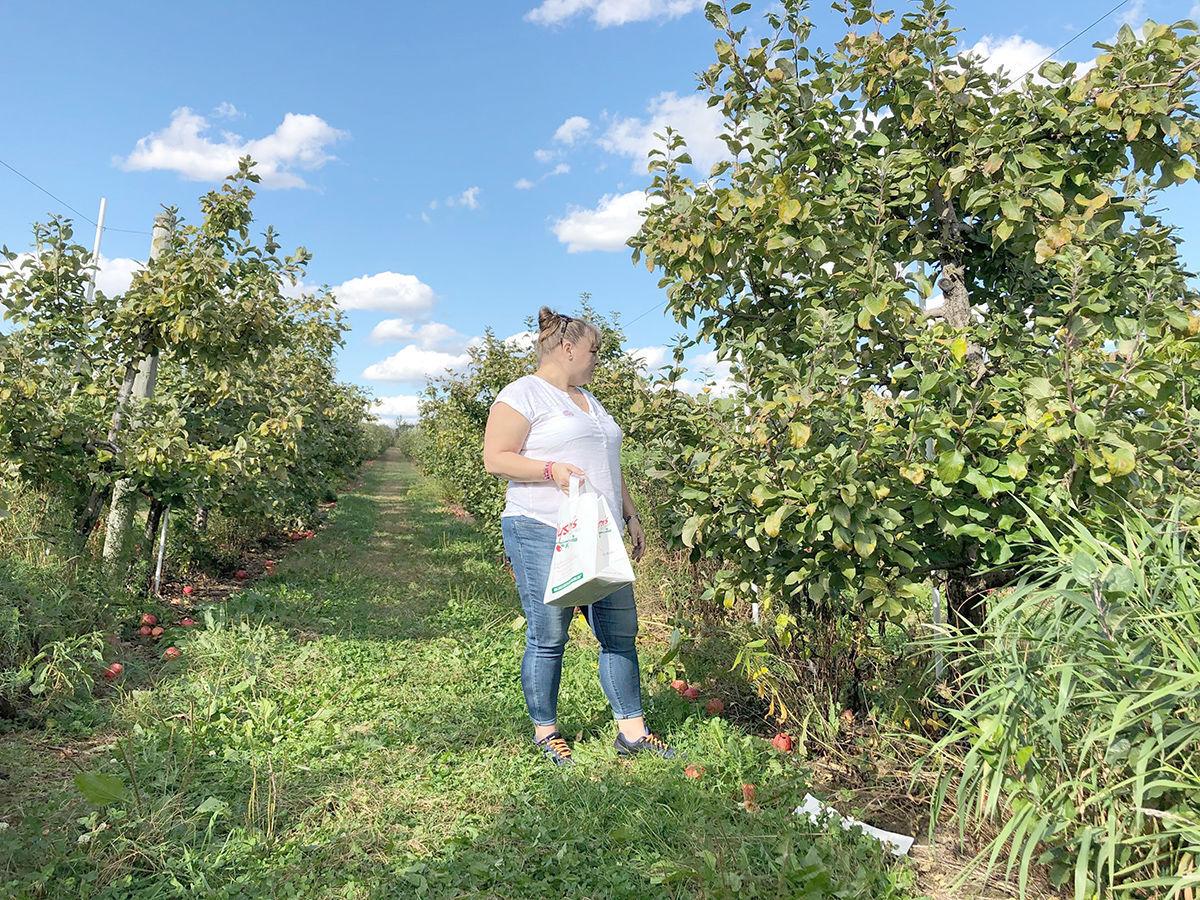 Signs warn apple-pickers and others to social distance at the farm stand at Alyson’s Orchard in Walpole.

In a year of previously unthinkable change, one fall tradition appears not only to have endured but to be flourishing.

Monadnock Region apple orchards report that pick-your-own (PYO) sales have spiked this year, with representatives pointing to the activity’s relative safety as well as strong demand for fresh, local produce.

Scott Farm Orchard in Dummerston, Vt., has seen PYO revenue and the number of PYO bags sold increase by 35 percent since it opened Labor Day weekend, compared to the same period last year, according to Simon Renault, its general manager.

Renault attributed the surge in apple-picking sales to a sense of cabin fever during the COVID-19 pandemic.

“People are very eager to get outside,” he said.

Scott Farm harvests the large majority of its 40 acres of active orchards to sell wholesale to New England food co-ops, which has not been as lucrative as PYO sales this year, Renault explained. He added that its 2½ acres of PYO orchards will stay open while apples remain on the trees but said the orchard may be “picked out” by mid-October due to high demand.

Although a smaller operation, Cortland Hill Orchard in Brattleboro has also drawn more customers this year after opening for apple-picking in late August, according to its manager, Gail Houle.

Houle estimated that the orchard usually has about 15 groups picking apples on each weekend day, which she said is an increase from previous years.

“People have been in the house for so long … I think they want to get outside and enjoy the beautiful fresh air,” she said. “All this month, they have been picking.”

Fran Imhoff, who manages the farm stand at Alyson’s Orchard in Walpole, said strong PYO sales have contributed to revenue growth between 15 and 25 percent from last year. That figure, she noted, does not include earnings from the first two weekends in October, which she said typically draw the most apple-pickers.

Imhoff has worked at Alyson’s for 13 years and said the orchard, which has 50 acres of fruit-bearing trees, is “busier than ever.” She noted that many customers have returned multiple times this year, including families that are attracted to the orchard’s amenities, including wagon rides, farm animals, pizza and cider donuts.

“It has blown away all of our expectations,” Imhoff said. “People are looking for something safe, something outdoors [and] something fun for the family to do. It can be a whole day of fun.”

In addition to the appeal of a socially distant activity, this year’s robust PYO numbers may also be explained by factors that emerged before the apple harvest.

Imhoff said Alyson’s seemed to have strong demand for its peaches when that season began Aug. 1. She added, however, that the orchard did not notice a revenue spike until apple-picking season.

Even though its peaches were only available for purchase at the farm stand, rather than for picking, Houle said Cortland Hill Orchard also had a successful peach season.

“People around here like to support their local business,” she said. “… It just seems like there’s more people picking and coming to the stand, I think, this year.”

Renault said he noticed higher-than-usual demand for locally grown produce when area farmers and community-supported agriculture (CSA) organizations were drawing heavy interest in June and July. He explained that Scott Farm Orchard has seen a “significant increase” in sales at its farm stand, which the organization opened on weekends in August to accommodate demand despite typically waiting until Labor Day to do so.

Renault added that Scott Farm capped the number of shares in its 13-week fall CSA at 250 after receiving that many requests on the first day of registration alone. The organization sold 92 shares last year.

“It looked like, due to COVID, people were really interested in getting more of their food from their local farmers,” he said. “… [There’s] huge demand for CSA, which is a very safe way to shop.”

It is unclear whether windfall farm stand sales this year, regionally and nationally, have been driven by safety-related worries around shopping at supermarkets, a desire to support local businesses or concern for global supply chains.

In any case, the Monadnock Region orchards say they are committed to providing a safe environment for customers. That includes limiting the number of people in their outdoor farm stands, offering hand-sanitizing stations and requiring masks in crowded areas.

Imhoff said the protocols have required a few extra employees on duty at Alyson’s, which also is not allowing apple-pickers to bring their own bags, but that people have been “very well-behaved.” She added that customers have been particularly patient, with many feeling less hurried than in the past.

“People have been really great,” Imhoff said. “We’ve done everything we possibly can to keep them safe, and I think they appreciate that.”

The strong apple-picking season has helped Alyson’s and Scott Farm recover some of the earnings they lost after weddings and other private events they had been scheduled to host were canceled.

“We’re hoping that the retail aspects of our operations will compensate for some of that revenue loss,” Renault said.

Imhoff explained that more than a dozen weddings were either canceled or postponed due to the pandemic, costing Alyson’s many thousands of dollars. The impact of those losses will also impact the orchard’s bottom-line in 2021, she added, since the postponed weddings limits the number of dates available for other events.

But Imhoff is confident that Alyson’s will recoup the lost revenue, thanks largely to the increase in PYO sales.

“If the orchard continues to draw as many people as it has been, then both sides of the business will even it out,” she said. “… We may even come out ahead.”