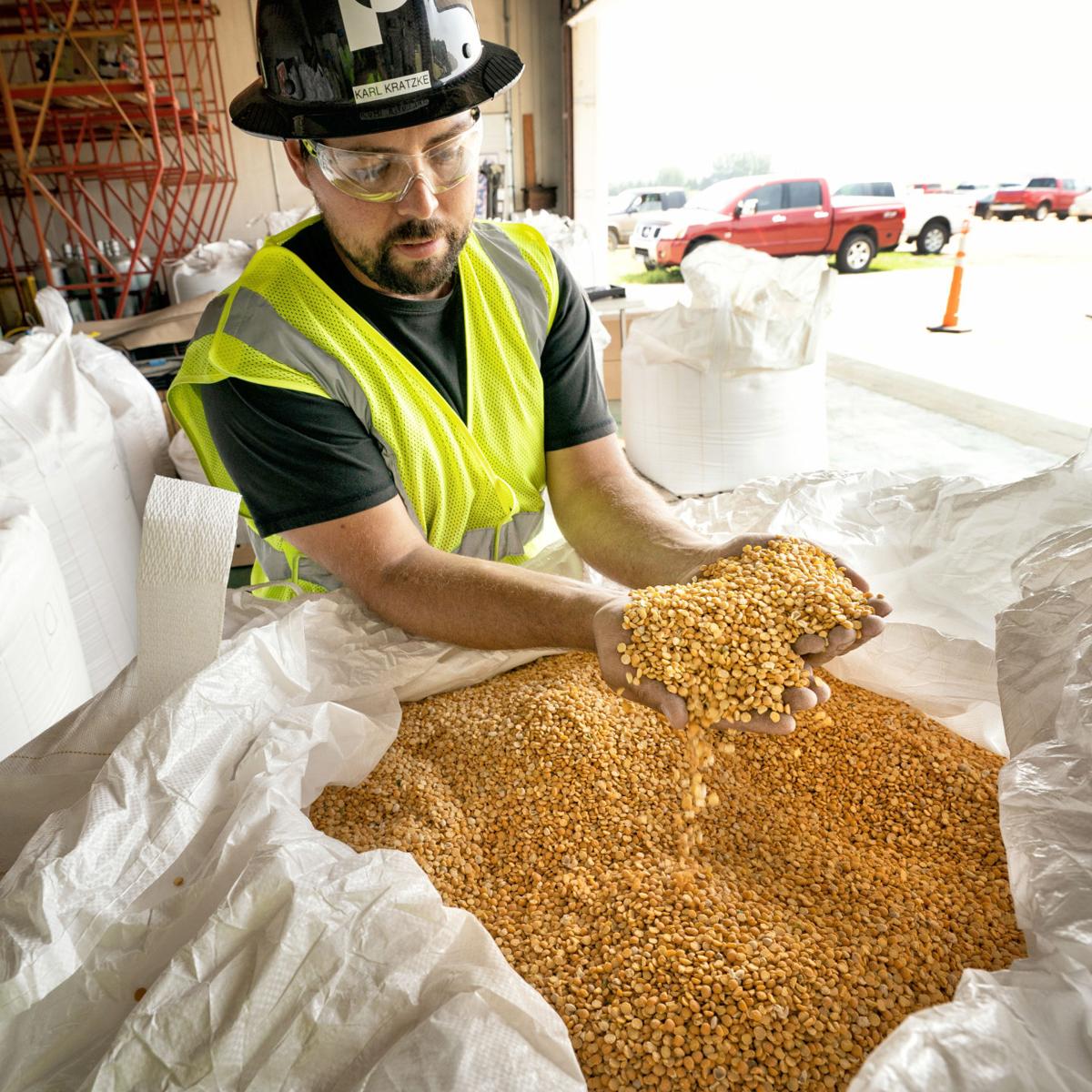 Project manager Karl Kratzke grabs a handful of split yellow peas from a 2,000-lb. bag, shipped from the PURIS facility in Harrold, S.D., and used only for testing equipment, not for food production yet. 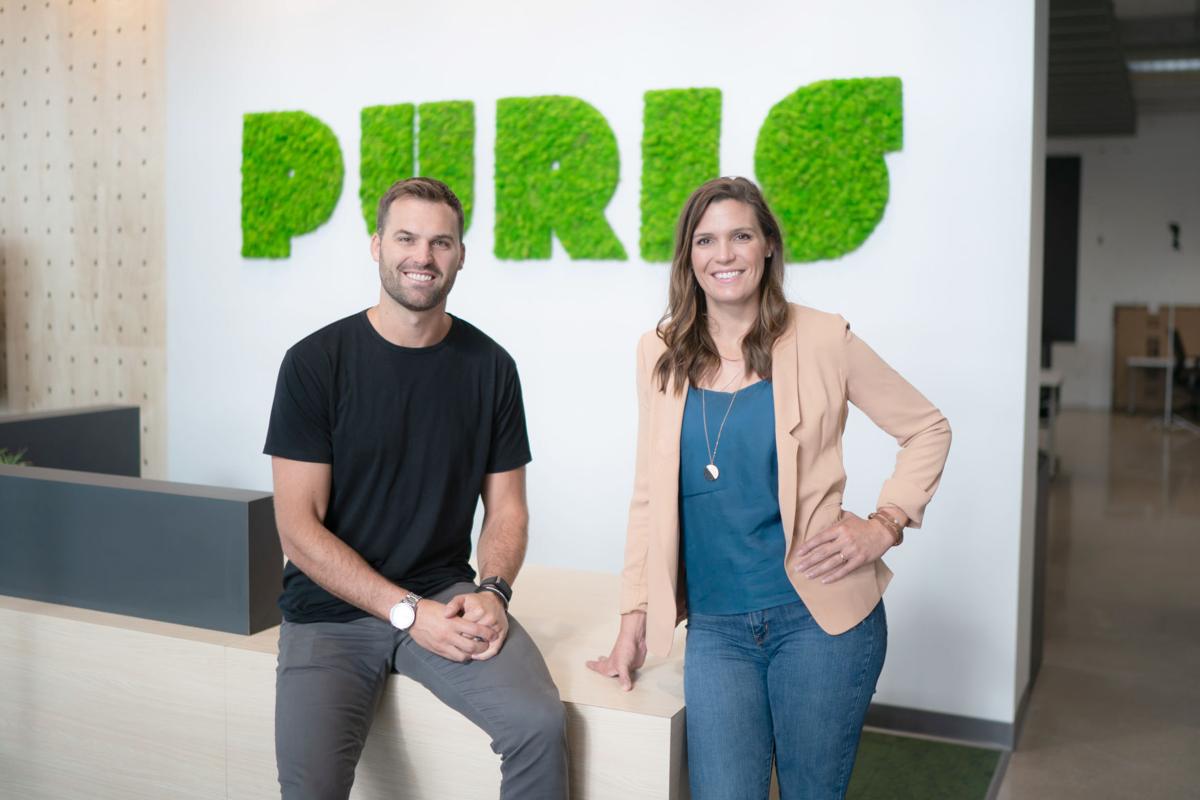 Project manager Karl Kratzke grabs a handful of split yellow peas from a 2,000-lb. bag, shipped from the PURIS facility in Harrold, S.D., and used only for testing equipment, not for food production yet.

In their telling of it, siblings Nicole Atchison and Tyler Lorenzen did not have a typical childhood.

“Our family was weird. We did weird things,” Atchison said. “What we were doing was like the opposite of cool in the farming community.”

In many ways, their upbringing was very Midwestern. They worked in crop fields, played school sports and spent ample time together at home in small-town Iowa. But their father, Jerry Lorenzen, had a radical idea: Farmers should mainly grow crops for people rather than animals.

Today, more than 35 years after Jerry began an experimental backyard garden, Nicole and Tyler are at the center of a revolution in the American diet — the rise of plant-based protein — because of a gamble the family took on the humble, even unappreciated, pea.

The siblings lead Puris, a company based in Minneapolis that has grown quickly over the last few years as a key ingredient supplier to Beyond Meat, a leading provider of meat alternative products. Puris has attracted sizable investment partners, including Cargill Inc.

And now, it’s putting the finishing touches on a $150 million facility in Dawson, Minn., that will increase its pea protein production by one-and-a-half.

It’s the company’s single largest investment so far. When production begins in September, Puris will be the largest producer in North America of pea protein — a product it first commercialized just seven years ago.

But for decades before that, the Lorenzens strived, against odds, to change an entire food system. And when the marketplace finally caught up, they were ready.

In the 1980s, Jerry was selling Purina livestock feed to farmers when he noticed something he felt was a massive inefficiency.

“So much of the crops are going to feed animals for the people to eat the animals,” Atchison recalled. “He knew that someday people will need to eat the plants, so they better taste good.”

Jerry began breeding soybeans in the family’s home basement to try and make them tastier, all the while keeping his day job.

To support his breeding research, he started developing custom corn and soybean seeds for nearby farmers. He and his kids manufactured these specialty seeds in a former school gymnasium.

Atchison was 7 and Lorenzen 5 when their father quit his job with Purina and went all-in on seeds. The kids spent summer breaks and every weekend working on rented test plots near their home in Fremont, Iowa. They would run between rows, shuttling soybean flowers back to their dad, who was manually mating the varieties.

“For a long time, the company was just my dad, my mom and the two of us as very little kids,” Atchison said.

By the time the siblings were teenagers, the business — then called World Food Processing — had established strong ties with food processors in Japan, a country where soy-derived foods are devoured. The family opened a soybean cleaning-and-dehulling plant in Oskaloosa, Iowa, in 1999.

In the late 1990s and early 2000s, they commercialized a blended hot dog — part tofu and part free-range pork — that was sold in grocery stores under the brand Bratos. “This was blended products way before Applegate started doing it,” Atchison said.

If they weren’t in the field, the siblings were with their dad at food shows or festivals, like RAGBRAI — the annual summertime bike ride across Iowa — handing out blended tofu dogs.

“Sometimes I block that part out [of memory],” Tyler Lorenzen said. “All of it felt crazy.”

Their dad, always looking ahead, saw another future need: If they were going to ask farmers to avoid chemicals, they needed a solution for weeds and disease. So in 1999, he started a new breeding program for yellow peas.

The idea was that farmers could plant peas at different times of the year to act as a natural shield against weeds, Tyler Lorenzen said. “And maybe someday we can pay them for growing those peas,” he added.

When the siblings went to college at Iowa State University, their father rented a few acres nearby so the kids could continue testing new crop breeds. Atchison played volleyball and Lorenzen played football for Iowa State, and both hired teammates to work with them.

One day in 2004, Lorenzen was walking the test fields in Ames when he saw a pathetic-looking clump of pea plants. “They were all lodged over and their leaves in the mud. They did not look good,” he said.”And I remember calling my dad and [saying], ‘Dad, what are you doing?’”

But, their dad insisted peas were crucial to their future.

The limits of soy

Tyler Lorenzen spent a few years in the National Football League while Atchison built her career as a biomedical engineer in the Twin Cities.

After being cut from the New Orleans Saints in 2011, Lorenzen began working at the company’s recently purchased soy protein plant in Turtle Lake, Wis. This new plant took the company another step down the supply chain, turning their cleaned soybeans into a food ingredient that could be sold directly to food companies.

But they faced competition from far-larger agribusinesses in soy. As well, consumer sentiment was shifting about soy protein, with some worried about its effects on hormones or possible links to cancer.

“Is there anything wrong with soy protein? Probably not. But there’s a dark cloud on it based on Google results. We needed to make a pivot,” Lorenzen said. He called his dad and asked, “Whatever happened to those peas?”

But very few food companies were buying pea protein at the time. France-based Roquette was the only company with appreciable pea protein production.

Skeptical, Jerry Lorenzen told his son, “If you can make it taste good, I’ll back you.”

Tyler Lorenzen and Kushal Chandak, now Puris’ vice president of research and development, tinkered with the yellow pea. By 2014, they had a commercial product.

Two private investors — Charles Chang, founder of Vega, and local investor Chad Hancock — were early supporters of the company, but wanted the siblings to rebrand it. In 2017, World Food Processing became Puris. Atchison is CEO of Puris Holdings, the umbrella outfit, and Tyler Lorenzen is CEO of Puris Protein, which is focused on its main the pea operation.

Over the next two years, Minnetonka-based Cargill Inc. invested at least $100 million in Puris to get ahead of the exploding demand for pea protein in the United States. Around the same time, Beyond Meat went public, catching the attention of Wall Street and investors with deep pockets.

Henk Hoogenkamp, a consultant on plant-based protein to food companies, said the rapid growth of pea protein wouldn’t have happened if Tyler Lorenzen had not met Beyond Meat’s founder Ethan Brown, who then decided to use peas instead of soybeans as the base ingredient in that firm’s now-famous alternative-meat lineup.

In China, several dormant soy facilities have been converted to pea processing plants. Chinese companies buy North American-raised peas, import them for processing in China, and then ship much of the finished protein powder back to the U.S.

Pea protein from China is selling for about $4 a kilogram, which is about half the price of U.S. companies, Hoogenkamp said.

With the high cost of transportation and the low prices they are charging, Atchison called this re-imported pea protein “questionable.”

The main challenge Puris faces now, she said, is to get more American farmers to plant yellow peas. The company is trying to persuade farmers to plant peas between corn and soybean rotations.

But with prices for corn and soybeans near record highs, farmers have relatively little incentive to focus on anything but the two giant staples.

“If we were going after this to play the commodity game, we would be set up for failure,” Atchison said. “Our thesis has always been to get [peas] on those acres at different times of the year, so you are not asking farmers to make an either/or decision. It’s a yes/and decision.”

The siblings believe their long-running seed-genetics program give them a competitive advantage as the pea-protein business grows. Puris has many breeds that maximize yield, resist disease and grow in various climates.

“For so long, my dad had to justify his decisions to his peers in the breeding industry,” Atchison said. “As recently as a year or two ago, I heard him justifying his decisions in a group and I reminded him, ‘You don’t have to anymore. People get it now.’”