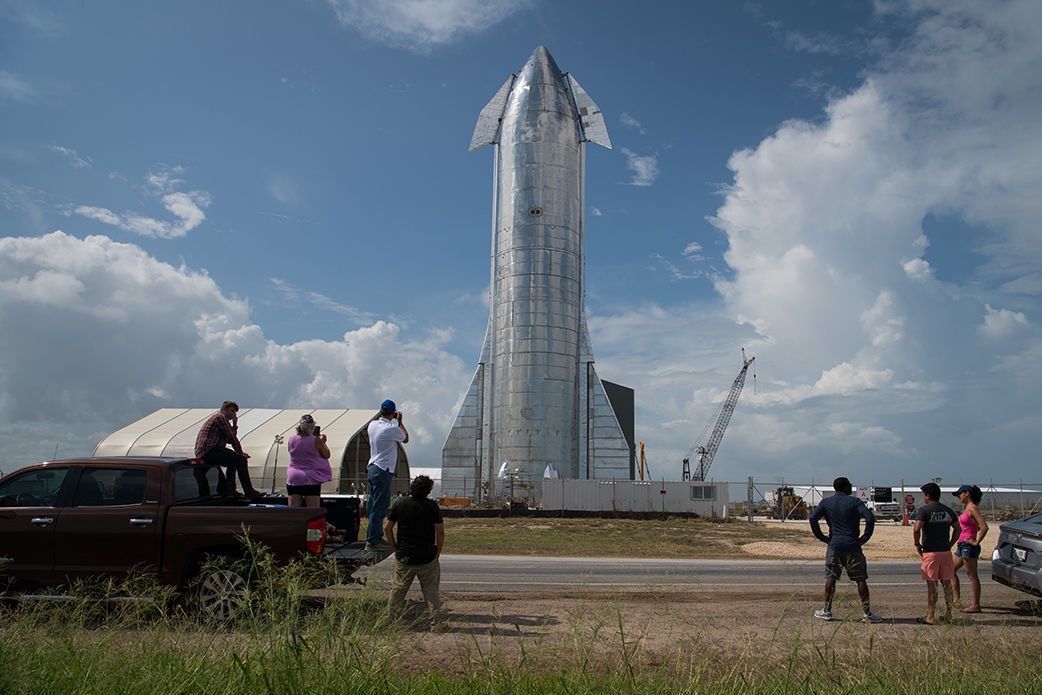 Space enthusiasts look at a prototype of SpaceX’s Starship spacecraft at the company’s Texas launch facility in September 2019. 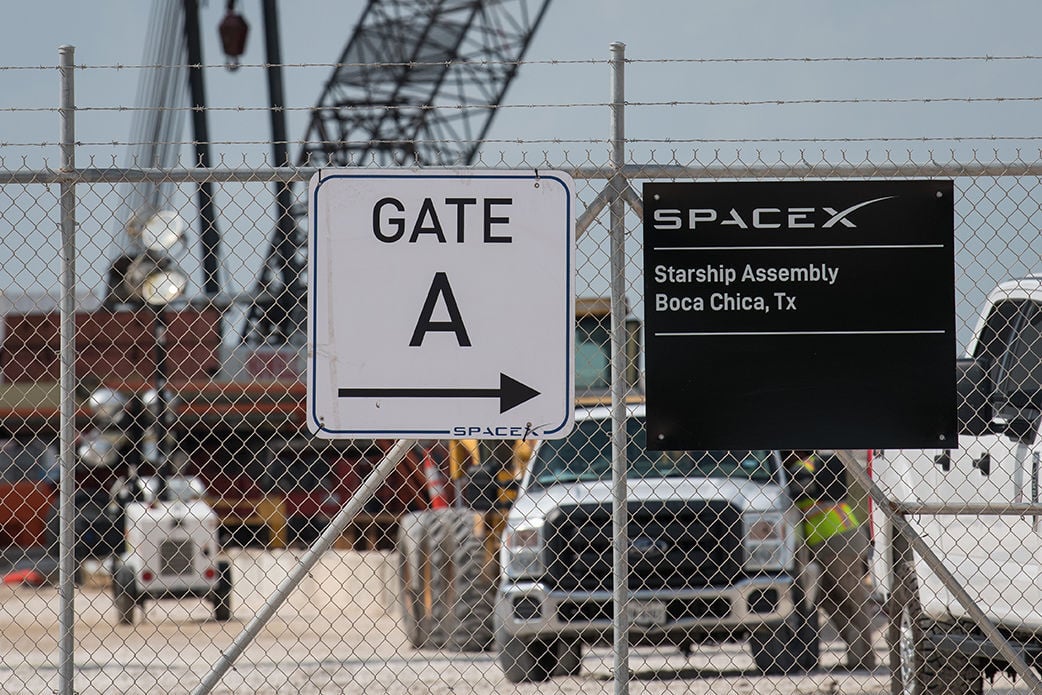 A gated entrance by a prototype of SpaceX’s Starship spacecraft is seen at the company’s Texas launch facility.

Space enthusiasts look at a prototype of SpaceX’s Starship spacecraft at the company’s Texas launch facility in September 2019.

A gated entrance by a prototype of SpaceX’s Starship spacecraft is seen at the company’s Texas launch facility.

The secluded Texas beachside community of Boca Chica Village was once a haven for retirees, snowbirds and outdoorsy people who enjoyed dirt biking, fishing or lounging near the water.

Today, traffic backs up the lone highway out of the unincorporated area that’s now home to only about half a dozen residents — and SpaceX’s Starship facility. During the day, selfie-seeking tourists line the road for photos with the stainless steel spaceship under development. At night, excavators plow the earth at the busy construction site. Before test launches, residents receive a notice suggesting they temporarily evacuate for safety.

Even more change could be in the Texas neighborhood’s future. In March, SpaceX Chief Executive Elon Musk tweeted that he wanted to create a city encompassing Boca Chica Village and the surrounding area.

Creating a city could have several benefits for SpaceX. In theory, it might help the private spaceflight company attract future employees, foster a political climate friendly to a business that’s bound to be a noisy neighbor and even pave the way for the development of the kinds of amenities that might crop up near a would-be transportation hub.

Musk is hardly the first entrepreneur to think about forming a city.

The late 19th and early 20th centuries are rife with examples of company towns, chocolate-centric Hershey, Pennsylvania, among them. The idea is now gaining new life as tech entrepreneurs voice dissatisfaction with government restrictions and limitations. In Nevada, the governor wants to allow tech companies to essentially create their own local governments.

“This initiative in Nevada to me reads as a new way of doing business, a new way of trying to avoid some of the common challenges that some of these companies have been running into the last couple of years,” said Jared Mondschein, associate physical scientist at Rand Corp. who has studied the digital transformation of cities. “The wild card in all these conversations is always: How will people who live there react?”

The company town of old was typically formed to attract workers to new job sites. Industries such as mining and smelting often set up sites far away from population centers — inconveniently far for daily commutes. A company town was almost a necessary overhead expense, said Tracy Hadden Loh, a fellow at Brookings, a D.C.-based think tank.

That was the case with Smeltertown, a company town established in Texas in the late 1800s by American Smelting and Refining Co. to focus on copper and lead extraction. Located outside El Paso, the town was segregated: White engineers and plant managers lived in wood-frame homes with indoor plumbing, while workers of Mexican descent resided in smaller, cinderblock homes.

El Paso County governed Smeltertown, but American Smelting and Refining operated a company store that was deeply intertwined with workers’ finances, offering credit and deducting the costs of purchases from employee paychecks. The company also provided Smeltertown residents with some resources. It had a hand in distributing water, subsidized vocational training and paid for the construction of a road to the town’s Catholic church.

“Often these amenities and relationships that were cultivated between the company and the community could work to everybody’s advantage, but in some ways [they were] a form of control,” said Monica Perales, associate professor of history at the University of Houston and author of the book “Smeltertown: Making and Remembering a Southwest Border Community.” “I’ve heard it referred to as the iron fist in the velvet glove.”

Such arrangements have given company towns a reputation for exploiting workers. Many employers paid not in cash but rather in scrip that could be redeemed for goods at the company store. In some cases, the employer owned the workers’ homes as well and deducted rent from their pay. With the company holding the power to set prices and extend credit, workers could find themselves mired in debt.

Smeltertown is no more. Nearly a century after it sprang up, it was demolished in 1973 amid an air pollution lawsuit against the company and concerns about lead contamination and poisoning in the town’s children.

A modern iteration of the company-town idea can be found in Silicon Valley. There are tech-firm campuses with laundry amenities, free food and Wi-Fi-enabled buses. Providing such services can erode the boundary between employees’ work time and personal time and removes reasons to leave the campus bubble, which can lead employees to stay at work and labor longer.

Another iteration: start-up societies, which are small locales that try new policies and forms of governance. They have the potential to make regulatory changes that can accelerate technological progress, but none have moved beyond the planning phase in the U.S.

There are questions about whom these start-up societies will help, said Isabelle Simpson, a doctoral candidate in geography at McGill University. The societies are billed as communities of like-minded people. While they’re typically presented as a way to help the poor by creating jobs and entrepreneurship opportunities, it’s too early to tell whether that will happen.

And then there’s the concept of innovation zones. Nevada Gov. Steve Sisolak’s proposed plan would allow a company owning at least 50,000 acres of undeveloped and uninhabited land to create its own government with the same kind of authority as a county government. That means the company-created zone could impose and collect taxes, create a school district and court system and provide services, according to the Las Vegas Review-Journal.

The state already has one interested party: Blockchains LLC, which owns 67,000 acres in Storey County near Reno and has said it would be interested in setting up a community that would rely heavily on blockchain technology. The so-called smart city would have a research and development center focused on housing, transportation and energy technologies that could help residents and others, Blockchains Chief Executive Jeffrey Berns wrote in an op-ed in the Reno Gazette-Journal.

“For too long our state has watched as many of our neighbors reap the benefits advanced technology industries bring,” he wrote. “Now is Nevada’s time to take a leading role in developing the technology solutions the entire world will use.”

Berns and Sisolak have insisted the project would not be a company town. In his op-ed, Berns noted that the innovation zone would be run by an elected board of citizens who would answer to the state just as Nevada cities and counties already do. But a draft of the proposal obtained by the Review-Journal states that at least initially, the company interested in creating the innovation zone would get to select the candidates for at least two of the initial three members of the zone’s board.

Regardless of government structure, in areas where there is a single major employer, that company holds power over elected officials — and by extension, over its employees, said Zoe Willingham, research associate for the economic policy team at the Center for American Progress, a liberal think tank.

They said that in such situations, the big employers also can “suppress wages and working conditions without workers quitting because of the lack of other employment options.”

Sisolak told the Review-Journal that the goal of the innovation zones was “a massive economic development investment in Nevada, and a chance to set down a marker that Nevada is the blockchain technology center of the world.” Blockchains LLC, Sisolak and Berns did not respond to questions from The Times.

Musk’s plans for the city of Starbase are unclear. SpaceX did not respond to a request for comment, and Musk himself has given just a few clues on Twitter. This week, he said that he expects Starbase to grow by “several thousand people” in the next year or two, and that he plans to donate $20 million to Cameron County schools and $10 million to the nearby city of Brownsville for “downtown revitalization.”

At best, planning appears to be in the early stages. SpaceX officials mentioned an interest in incorporation during a conversation with the legal department of Cameron County — of which Boca Chica Village is a part — but neither Musk nor the company has turned in the necessary paperwork to start the process, Cameron County Judge Eddie Treviño Jr. said last month.

“There’s a lot associated with incorporating, other than just wanting to,” he said.

For starters, Texas state law requires a potential municipality to have at least 201 inhabitants to incorporate. A Texas Supreme Court ruling also states that there must be a nucleus around which a town can develop, and that the area must be capable of receiving municipal services on a regular basis, said Alan Bojorquez, a municipal lawyer who serves as city attorney for several Texas cities.

Inhabitants would then have to vote on whether they want to incorporate the city.

“The law is very straightforward,” said Bojorquez, who is not affiliated with Boca Chica Village or SpaceX’s plans. “The difficult part of the incorporation process is truly the public relations and the politics of convincing people who live out in the country to become a city.”

Successful incorporations happen usually because of “strong support among neighbors to either oppose something or achieve something they can’t do on their own,” he said.

As SpaceX’s ambitions grew in Boca Chica Village, the company began offering buyouts to residents. As of March, SpaceX — through an affiliated LLC — owns 110 parcels in Cameron County.

The company envisions the site as a future spaceport to the stars, where Starship spacecraft would take off on regular flights. As part of that plan, SpaceX is trying to drill for natural gas — the rocket’s fuel — on nearby land and is feuding with an oil company over the issue.

Incorporating Starbase could give SpaceX more control over local ordinances, such as zoning, which could enable the company to conduct more test flights and launches without having to evacuate the nearby area for safety. It could also set up the area to be more attractive for potential workers to relocate.

Workers could get in on the ground floor of a thriving city — but they also could be vulnerable.

“The place’s own viability is tied to the survival of the company,” said Loh of Brookings. “That’s not necessarily ideal, and it produces really tough outcomes if the place doesn’t make it.”

South Padre Island resident Louis Balderas has filmed SpaceX’s progress at Boca Chica Village for two years for his widely watched YouTube channel, LabPadre. He lives about 45 minutes away and said he would be interested in moving to the city of Starbase, if it were to be incorporated.

The city would need more public utilities — the cell reception out there is horrible, he says, and water has to be trucked in each month — but he relishes the idea of having a front-row seat to the action.

“I would hope that it would be more than just SpaceX employees,” he said. “It would be cool to live in Starbase, Texas.”