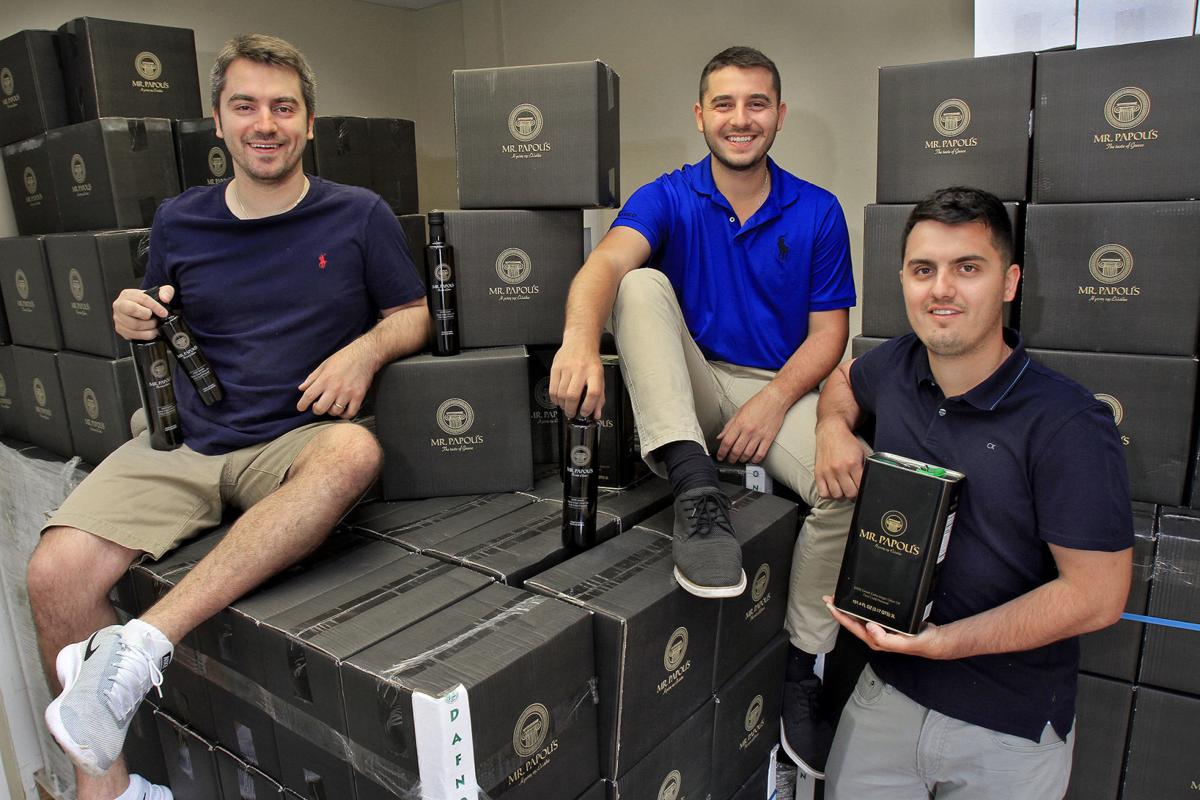 From left, brothers Christos, Konstantinos and Demitris Georgiadis import extra virgin olive oil from their grandfather in Greece and sell it under the brand name Mr. Papou’s. They are pictured in the business’ Charlestown storage space. 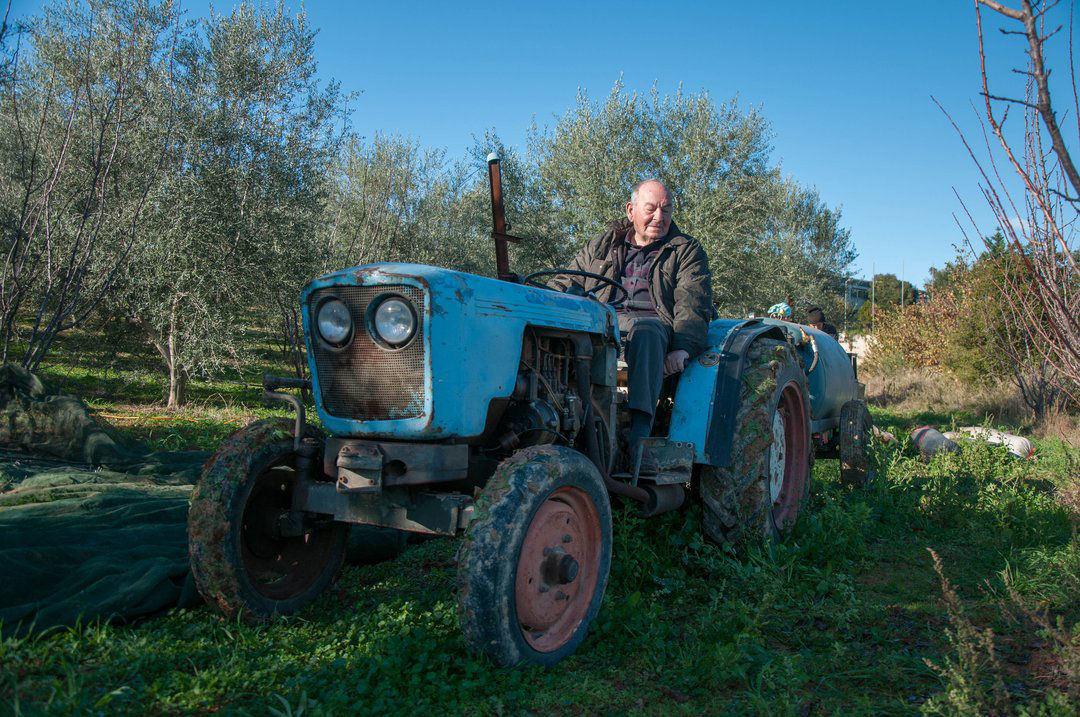 Dimitrios Tzanavaras has been running the family olive orchard in Poullitsa, outside Corinth, Greece, for 70 years.

From left, brothers Christos, Konstantinos and Demitris Georgiadis import extra virgin olive oil from their grandfather in Greece and sell it under the brand name Mr. Papou’s. They are pictured in the business’ Charlestown storage space.

Dimitrios Tzanavaras has been running the family olive orchard in Poullitsa, outside Corinth, Greece, for 70 years.

CHARLESTOWN — Three brothers are giving a century-old business new life as they create a local foothold for their grandfather’s olive oil company in Greece.

Christos, 30, Demitris, 26, and Konstantinos Georgiadis, 25, run the U.S. operations of the family business, importing extra virgin olive oil from Corinth, Greece, and selling it under the brand name Mr. Papou’s.

Christos lives in Walpole while his two brothers live in Charlestown, where they all grew up.

“The meaning of that word itself — Papou’s — it means ‘grandfather’ in Greek,” Konstantinos said. “So the entire company is based on our grandfather and what his father had started over in Corinth, Greece, in a small village called Poullitsa.”

The Georgiadises’ grandfather, Dimitrios Tzanavaras, gained his land from his father, who started the olive orchard 100 years ago. Tzanavaras has been running the farm and selling extra virgin olive oil under the family name for the past 70 years, Konstantinos said.

“He sells products to Europe, but he’s always kind of had a dream to sell to the United States,” he said.

Throughout their childhood, the Georgiadises remember their grandfather sending the family olive oil from Greece.

When they were kids, Konstantinos said they took for granted that they had this special olive oil at their fingertips.

“Even going to friends’ houses, it never really clicked that we have this product in our house that nobody else can get their hands on … We realized the value of it through the people around us,” he said, noting that they often gifted the olive oil on holidays.

Konstantinos credited Demitris with doing the legwork to bring their grandfather’s olive oil stateside. Demitris shipped over some product, spread the word and gained some momentum before approaching his brothers and getting them on board.

In 2016, Konstantinos said Demetris shipped over 1 ton of olive oil in 17-liter containers and saw success selling to family and friends. The following year, the other two brothers got involved. They bought 3 tons, adding a restaurant or two to their customer list, and then upped the order again, to 6 tons.

This year’s shipment was more than 10 tons and includes 3-liter containers and 250- and 500-mililiter bottles for household use.

The brothers began by storing the product at Charlestown House of Pizza, which their parents, Theodore and Maria Georgiadis, own. As inventory increased, they outgrew the space. A few weeks ago, they moved into a 300- to 400-square-foot spot on Charlestown’s Main Street, giving them storage and office space.

Konstantinos said he’s enjoyed watching the company’s organic growth here, which has mostly been through word of mouth.

“As of today, we’re selling from New Hampshire down to New York with very little sales effort,” he said.

For two of the three brothers, managing Mr. Papou’s is not their full-time job. Christos owns Yolo Frozen Yogurt on Gilbo Avenue in Keene, and Demitris works at their parents’ pizza parlor.

When it became clear Mr. Papou’s needed more attention, Konstantinos decided to quit his job as a director of sales for a company in Texas to work for the family business full-time.

Demitris said all three of them are passionate about the company and devote as much energy as they can to it.

“This isn’t our full-time job, but this is what we live and breathe,” he said.

He pointed out the economic struggles in Greece, which they have witnessed from afar and seen up close in their visits.

“In doing this, one of our major hopes is to be able to help the local economy in which we are originally from,” Demitris said.

Though the brothers were born in Charlestown, they have strong connections to the country where their parents and grandfather are from. Christos said they spent many summers in Greece and his younger brothers went to preschool there. They all have dual citizenship, he added, and speak Greek fluently.

“The Greek culture was a big part of our lives growing up and still is to this day,” Christos said. “We were all born here but are really well-connected to both Greek and American cultures.”

For their work, they travel to the country as often as they can. Konstantinos said, between the three of them, they’ve taken 10 trips to Greece since December.

Demitris noted that the visits are a chance to learn about the production process, which helps when selling it here. Cultivating season is typically October to December, he said, and they watch as the olives are picked, milled and pressed into oil.

Demitris stressed his grandfather’s focus on quality over quantity in the company’s product. The olives are hand-picked with brushes, he said, and pulled earlier in the season for more nutrients. From using a smaller variety of olives to cold-pressing them, every part of the process focuses on getting higher concentrations of nutrients and flavor rather than more oil, the brothers explained.

Christos pointed out that working with their grandfather is an invaluable and continuous learning experience.

“We feel extremely lucky that we are under the guidance of our grandfather who’s done it for as long as he’s done it, basically his entire life, because it’s not the kind of thing you can ever really completely learn, he said. “… So having somebody like that, who is running the operation side of things over there, really shows in our products every time our customers try it.”

Each brother has his role with the company, according to Konstantinos. Demitris handles most of the daily operations and distribution while Christos is in charge of marketing and packaging. Konstantinos heads up internal analytics, bookkeeping and sales.

While some families might struggle with the idea of working together on a regular basis, Demitris said their distinct roles allow them to flourish.

“We mesh really well together, and we’re able to run this business without fighting,” Demitris said. “... The three of us are best friends and also brothers. Along with working together, we spend our weeks golfing together when we have free time.”

Konstantinos agreed, noting that, even if there’s a small disagreement, the brothers move past it easily because they all know that their interest is what’s best for the family company.

And Christos chimed in: “One thing that’s helped a lot, too, they both realize that, as the older brother, I’m right the majority of the time.”

Joking aside, he noted that one of their biggest advantages as a company is that there are three of them.

“We can discuss things between the three of us and come to a conclusion, and more often than not, that ends up being the right decision,” Christos said, equating it to a system of checks and balances.

While the recent shipment is the company’s largest and the new space in Charlestown is a step forward, Christos said it’s a familiar feeling. The brothers have come a long way from 17-liter containers in just a few years, he said.

“... Every moment leading up to this has felt like it’s a pivotal moment … and I expect that to continue forever.”